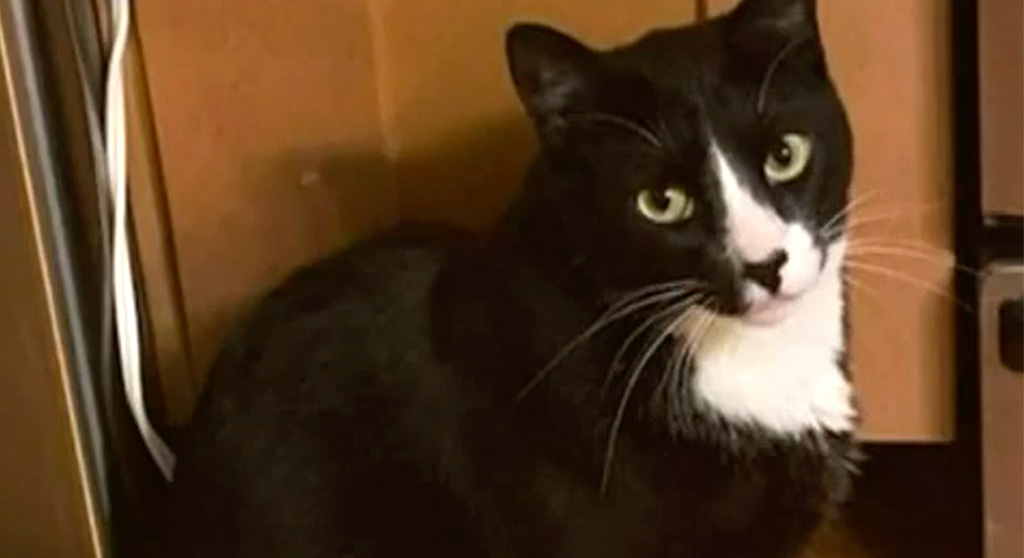 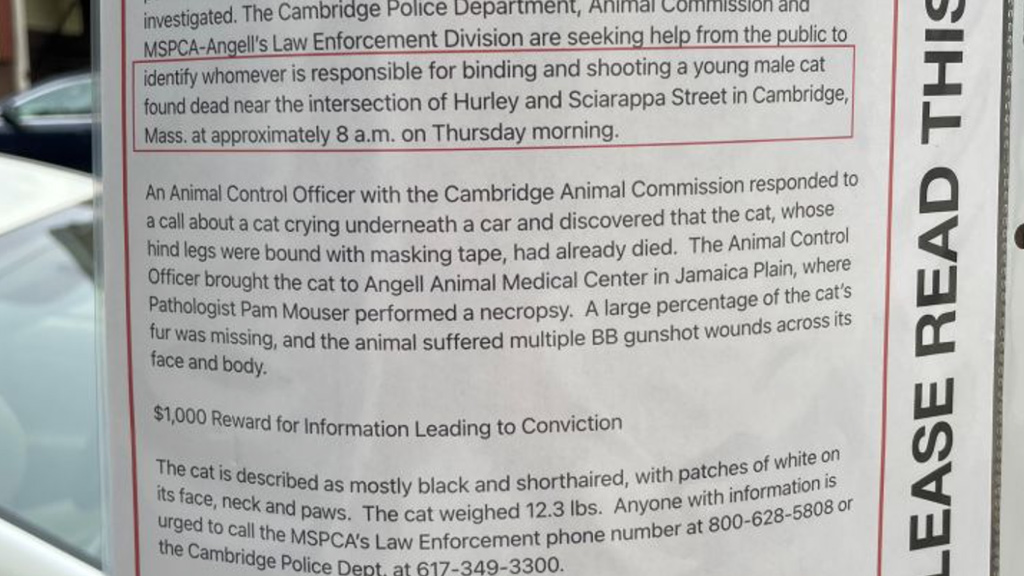 Posters about cat torture incidents were posted during the spring in East Cambridge. (Photo: Jane Morgan via GoFundMe)

A Cambridge man was arrested at his home without incident Thursday and charged with four counts of animal cruelty in connection with three East Cambridge cat torture cases that occurred between March and May, police said.

Rashad Gober, 31, is expected to be arraigned Thursday in Cambridge District Court. If ultimately found guilty of animal cruelty, Gober could face up to seven years in prison and a maximum fine of $5,000; the crime is a felony in Massachusetts.

Calls about a cat crying from beneath a car came to Cambridge’s Animal Commission too late May 6 to save the young tom; when an animal control officer arrived, the cat was dead – its hind legs bound with masking tape, and shot several times by a BB gun, police said. The cat, Gosha, had been missing for two days from the home of Erika Kirichenko, according to media reports.

Post-mortem testing on Gosha confirmed that the cat had suffered chemical or thermal burns in addition to BB gunshot wounds, according to the Massachusetts Society for the Prevention of Cruelty to Animals at Angell Animal Medical Center in Jamaica Plain. What happened to Gosha also had “striking similarities” to two past cases of cat torture in the neighborhood, MSPCA-Angell said. There was an incident March 4 with “another pet cat from the same East Cambridge neighborhood, as well as a third cat named Buddy who went missing in early May and returned on May 5 suffering from some kind of burn.” Both Gosha and Tortie, the cat who survived, had BB wounds and were missing their collars when found. (The latter cat’s name is also given as Tammy, a tortoiseshell or “tortie” cat.)

The reward for helping identify the person who tortured and killed a cat last week in East Cambridge rose into the thousands with neighborhood contributions.

The $2,500 in rewards promised by the MSPCA was for information leading to an animal cruelty conviction, “and it’s too early of course to know what will transpire,” said Rob Halpin, a spokesperson for MSPCA-Angell.

Jane Morgan, who crowdfunded $8,900 to supplement the reward, opted to donate the crowdsourced money to the MSPCA to offset the cost of the investigation and future law enforcement work, “so those monies will remain in a restricted account and used only for that purpose,” Halpin said. A message was left Thursday with Morgan seeking additional comment.

Gober had claimed to find Buddy in his backyard and bring the cat into his apartment to help before notifying the owner through a neighborhood social networking app and returning the pet to her, police said. But tips from the community also pointed to Gober as a suspect, and Cambridge police and the MSPCA recovered evidence in the cases from his apartment, vehicle and phone, police said.

“We recognize and can understand the great alarm these cases caused to the East Cambridge community and particularly to the cat owners,” said Branville G. Bard Jr., commissioner of the Cambridge Police Department. “We have invested significant resources and closely collaborated with the Animal Commission, the MSPCA and Middlesex District Attorney’s Office to ensure justice would be served following these very disturbing acts. We are grateful for the community’s ongoing support during our investigation, and I commend the excellent investigative work conducted by our Detectives and partners that resulted in this arrest.”

This post was updated July 1, 2021, with more information about the name of a cat who was reported as tortured.