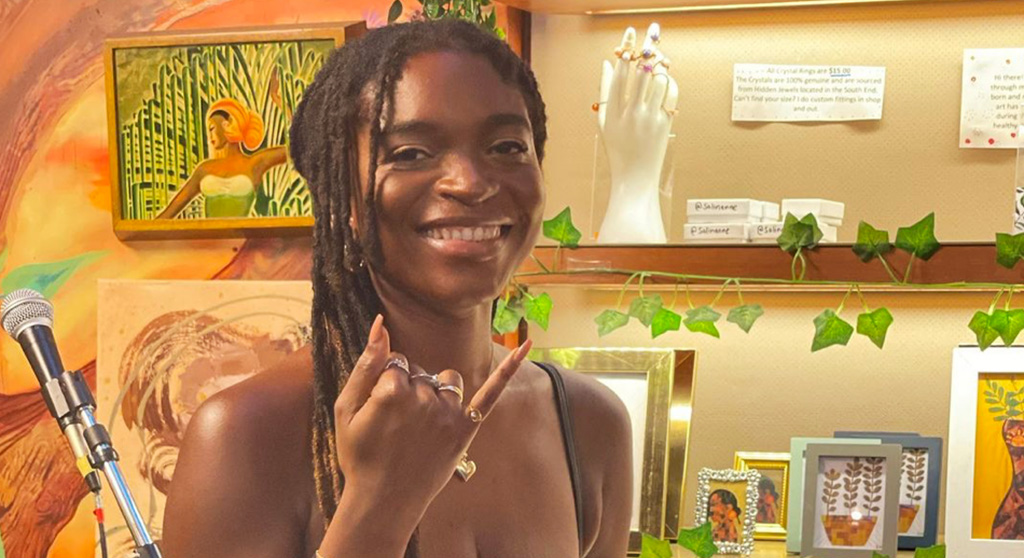 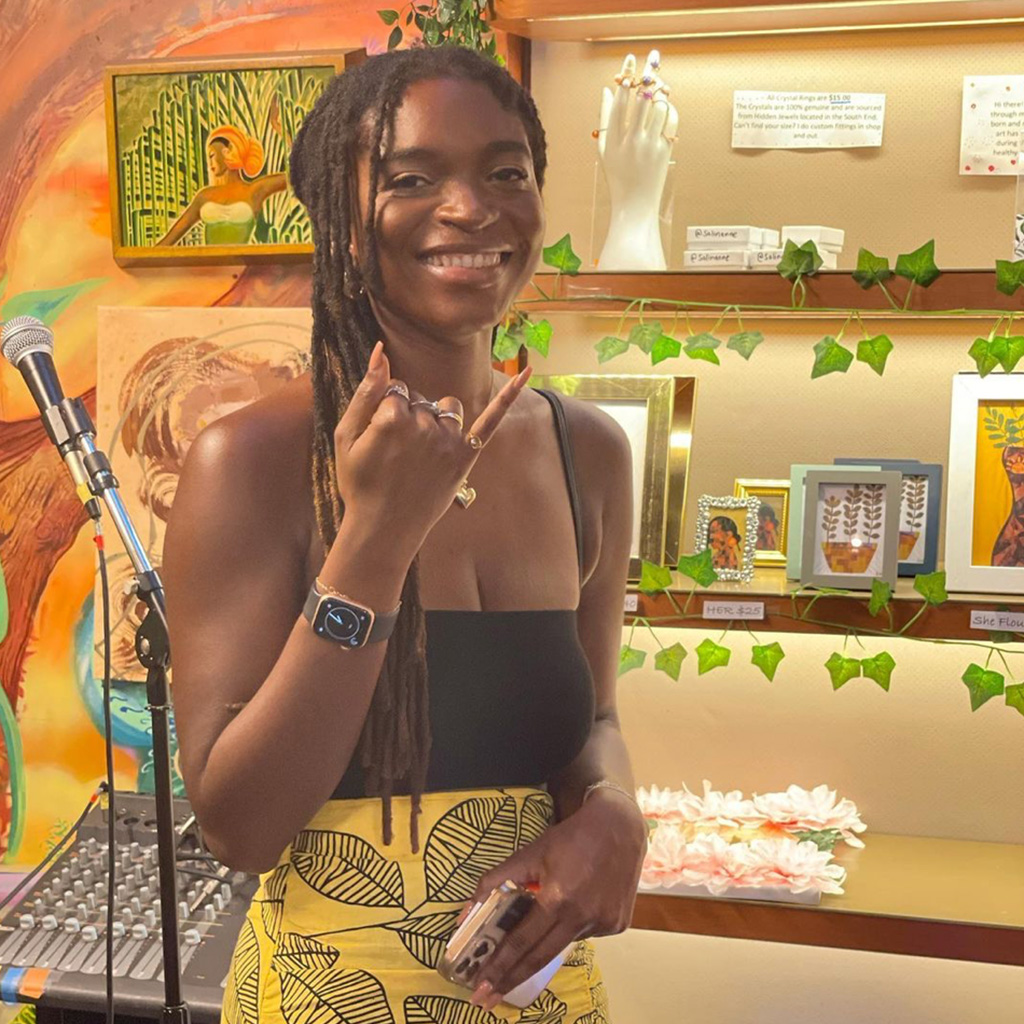 A shopper at 286broadway, a community-focused store in The Port, shows off the crystal rings of Salina Crosby of Collage With Sal. Crosby is also coordinator at 286broadway. (Photo: 286broadway via Instagram)

The promise of cannabis shops has left the Wok ’n Roll restaurant empty in Porter Square for more than three years, threatened to shut down Stereo Jack’s Records near Harvard Square and now could end a new business and community space almost before it gets started in The Port.

The 286broadway shop – that’s the address, as well – grew out of the short-lived Lucky Jungle arts space, switching over July 5 with a similar focus on plants, art, thrift and jewelry.

The address is wanted by a recreational cannabis shop, though, and approvals from a community and permitting process would displace 286broadway, which owners describe as being focused on supporting community and building generational wealth for lower-income residents.

But Santos Carrasquillo, of 286broadway, hopes people will attend that meeting to support the current use – “a black-owned small business [where] the team is lifelong Cambridge low-income residents,” 286broadway said on social media.

“We want to figure out how we all can move forward without any displacement and get a win-win for everyone where no party is left behind or neglected or displaced. So we will look into working with them,” Carrasquillo said Friday, referring to the cannabis sellers.

Option to buy a vacant property

LMCC had an option to buy 286 Broadway before Lucky Jungle or 286broadway was open there, said attorney Walter Sullivan on Sunday. He represents cannabis shop owner Flavia Hungaro, of Belmont.

“The place was vacant,” Sullivan said. Lucky Jungle “went into a storefront that was not going to be forever. We already had an option to purchase to open up a cannabis business there, so it’s really the other way around when you think about who was first.”

As a woman leading a cannabis business (mother-in-law Irene Hicks is a partner), Hungaro qualifies as a social equity applicant in a city that is still in a two-year head-start period for economic empowerment applicants – in large part, people of color. That period may end Sept. 23 or be extended; but an extension could include social equity applicants such as Hungaro, the attorney said, in which case the fate of 286 Broadway and its namesake shop could come quickly.

Looking for a win-win

Too often “big business comes in to eat small business” in a way that’s especially painful “in our poor neighborhood, which is already affected by the housing boom,” he said. “How does a big business come in and create community benefit and impact without displacement – without cannibalism? It definitely seems like there’s an opportunity here.”

An example of a win-win could be something like what Revolutionary Clinics has done in Central Square, where the medicinal marijuana dispensary has given a retail space at the front of its dispensary to Lola’s, a vintage boutique. Carrasquillo also wondered if pushing closer to Kendall Square wouldn’t be a smarter move for a cannabis business.

“There’s plenty of vacant storefronts around the city, especially after the pandemic. There’s plenty of space for them,” he said. “For people like us, it’s what can we afford? It’s very similar to our affordable housing issues.”

Sullivan said Sunday that it was impossible to conjecture at this point about LMCC and 286broadway coexisting at the site. Hungaro’s decision on whether the address is best used for a full cannabis retail store or for a weed delivery or courier service will dictate how much space she needs and how much could remain for other uses.

Hungaro can own three retail sites under state law, and Cambridge would be the third – though none are yet open, Sullivan said.

LMCC is also the name on a January host agreement for a cannabis business to be owned by Hungaro in Taunton, where she plans to grow as well. She also has a limited liability company called Sugarloaf Cambridge Cannabis and a host community agreement signed in January to open a Sugarloaf in Maynard. The Maynard site would be a dispensary only, and according to Wicked Local Maynard will share space with a gourmet goods shop called Art”s Specialties.

The Wok ’n Roll storefront has been empty since June 2018 (and the neighboring Rod Dee Thai restaurant space since April 2019) with interest from a cannabis seller identified as Porter Square Remedies. The attempted takeover of the Stereo Jack’s site by a cannabis seller known as Budega ended when city inspectors determined the location was inadequate for the use, a manager said Friday.