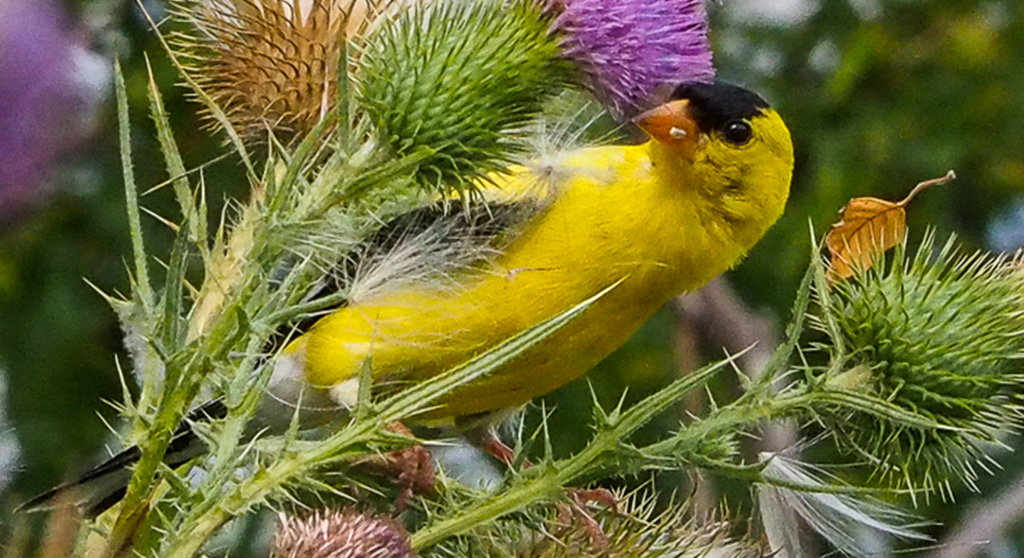 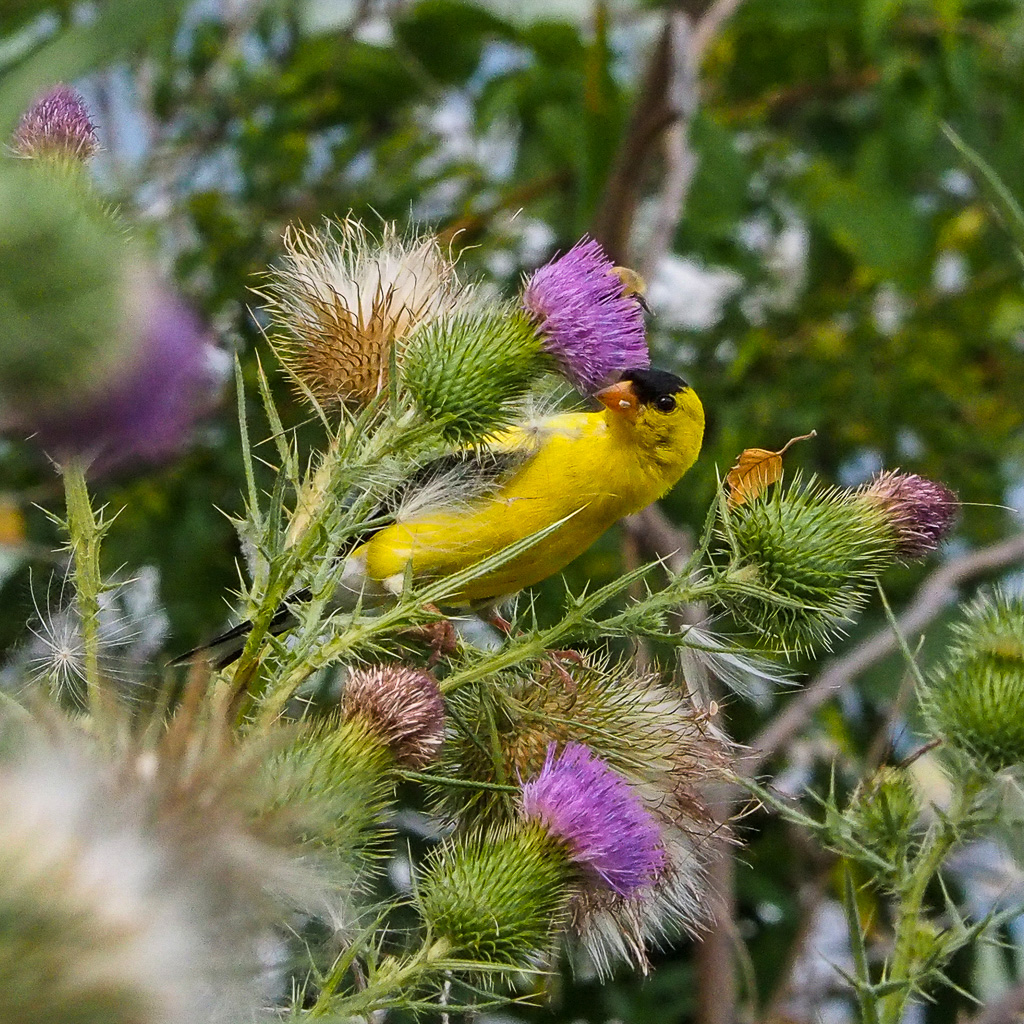 Have you ever seen an acrobatic, lemon-yellow bird with black wings eating seeds from a sunflower? This tiny bird is the American goldfinch (Spinus tristis), one of the few birds that is completely vegetarian. Goldfinches eat mostly seeds, unlike other birds who incorporate some insects into their diet.

Goldfinches wait until their food is plentiful in July and August before breeding, nesting and raising their young. It’s later in the season than most other birds, but means you may be able to spot them now in sunflowers and thistles – and in pairs, while the rest of the year the birds forage in flocks. The breeding male molts his feathers to turn a bright yellow in the spring and the female sports a subdued yellow bib with olive above; in the winter, males and females are brownish with blackish wings.

The birds are adapted for eating seeds: They have a conical beak for opening shells and agile feet to grip even when hanging upside down. Goldfinches like thistles and asters, sunflowers and bird feeders, anywhere seeds are abundant. The females uses thistle and milkweed fibers to line their nests, which are about 2½ inches in diameter, cup-shaped and built in layers. It takes the female about six days to build a nest, which is an engineering marvel. First, she collects bark, weeds, vines and grass to weave an outer shell. Then she weaves in bark, spiderwebs and caterpillar silk to reinforce the rim. Last, she lines the cup with down from thistles or milkweed. The nest is tightly woven, and so waterproof that it can fill up with water during a storm.

The female lays four to six bluish oval eggs at night, each egg about the size of a jelly bean. The male feeds the female while she rests on the eggs to protect and warm them. In about 12 to 14 days, the eggs hatch and both parents feed the youngsters. At first the female regurgitates seeds for the nestlings, but gradually the male role increases until he may provide most of the food in the later stages of development. The young leave the next after about two weeks, but they are still fed by the male for a few more weeks. The male finds the youngsters by listening for their call. The chicks stop calling when they become independent adults (something I hope my young adult will not emulate). 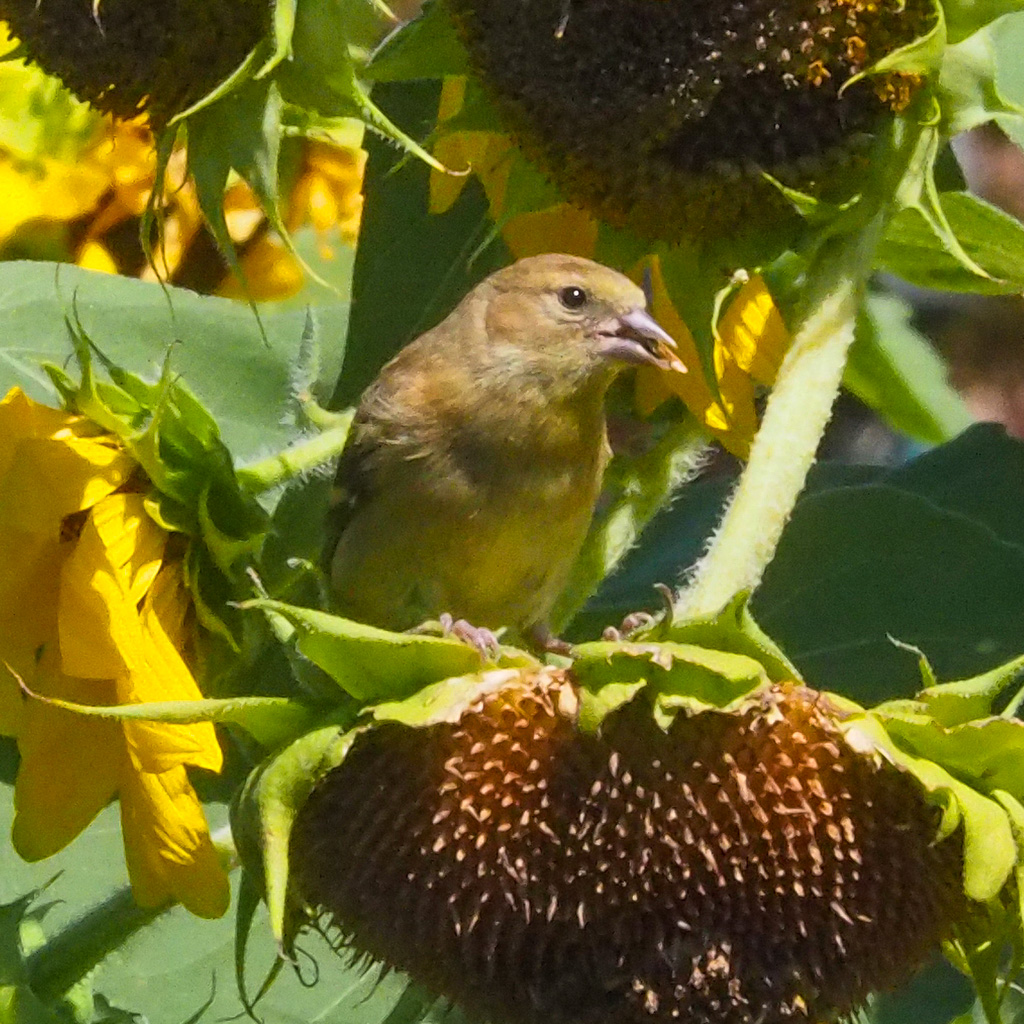 The American goldfinch has a distinctive flight pattern. It flaps it wings to fly up, then folds its wings to glide down, repeating the up-and-down pattern until it reaches its destination.

You can encourage goldfinches in your yard by growing seed-producing plants such as sunflowers, zinnias, cosmos, bee balm, coreopsis or thistle.