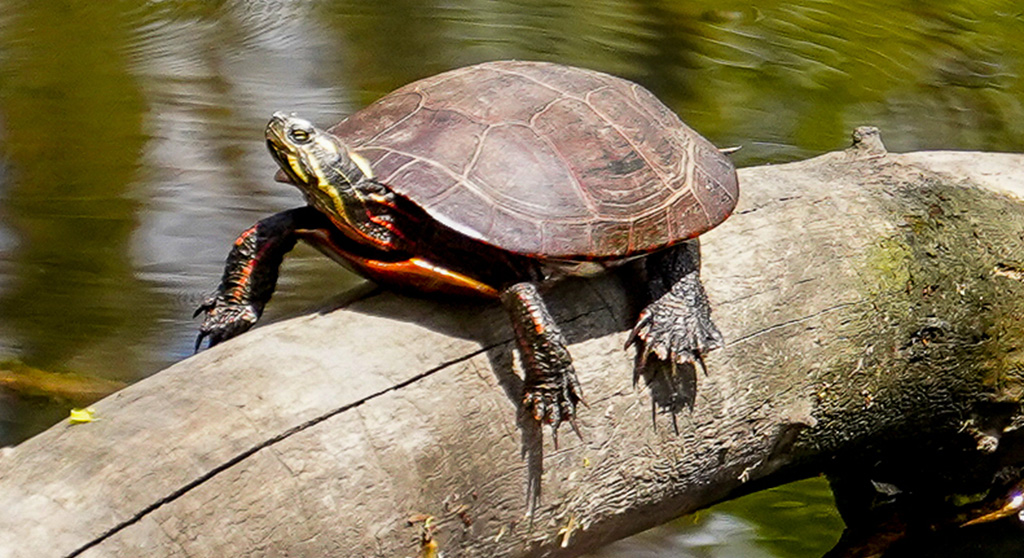 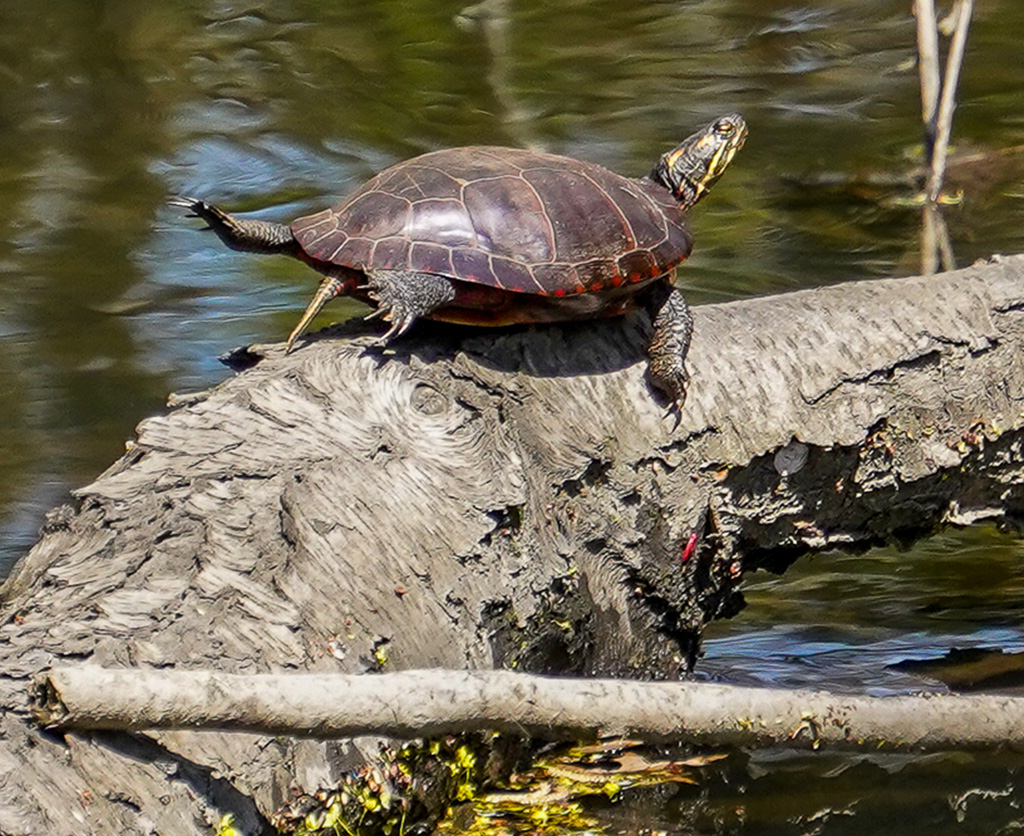 A painted turtle basks on a log to regulate its body temperature. (Photo: Jeanine Farley)

You might see a turtle basking on a log in the Alewife Brook, at Fresh Pond or in shallow sections of the Mystic River. Most likely, this is a painted turtle (Chrysemys picta), one of 10 species of turtles in Massachusetts. The painted turtle has an olive-colored shell and yellow stripes on its head. It has two yellow spots behind each eye and orange markings along the lower edge of its shell. Its shell, or carapace, is 4 to 10 inches long.

Turtles are ectotherms, which means their body temperature fluctuates with the temperature of their surroundings. Underwater, the turtle’s temperature can drop by as much as 90 percent. Within a few hours after being submerged, a turtle’s blood-oxygen levels drop to near zero. (Humans would survive for only minutes with blood-oxygen levels this low, but painted turtles can live this way for three to four months!)

Adult eastern painted turtles hibernate throughout the winter buried in mud on the bottom of a pond or river. They rely on stored sugars to survive. In Massachusetts, they spend at least four months in hibernation. Air temperature fluctuates, and it can get below freezing on land (too cold for turtles to survive); at the bottom of a lake or moving river, the water does not usually freeze and the temperature is stable. Temperatures a little above freezing are perfect for turtle hibernation. Unlike frogs, adult turtles cannot survive if ice crystals form in their bodies during freezing temperatures.

Overwintering turtles take in oxygen from the water as it passes over blood vessels in their skin, mouth and cloaca (or rear end). If, over the course of a winter, the oxygen in the water becomes depleted – and it often does – painted turtles switch to anaerobic respiration, which does not require oxygen but can lead to a damaging buildup of lactic acid in the tissues. To counteract this, the turtle’s skeleton and shell release carbonate buffers of calcium to neutralize the lactic acid buildup. 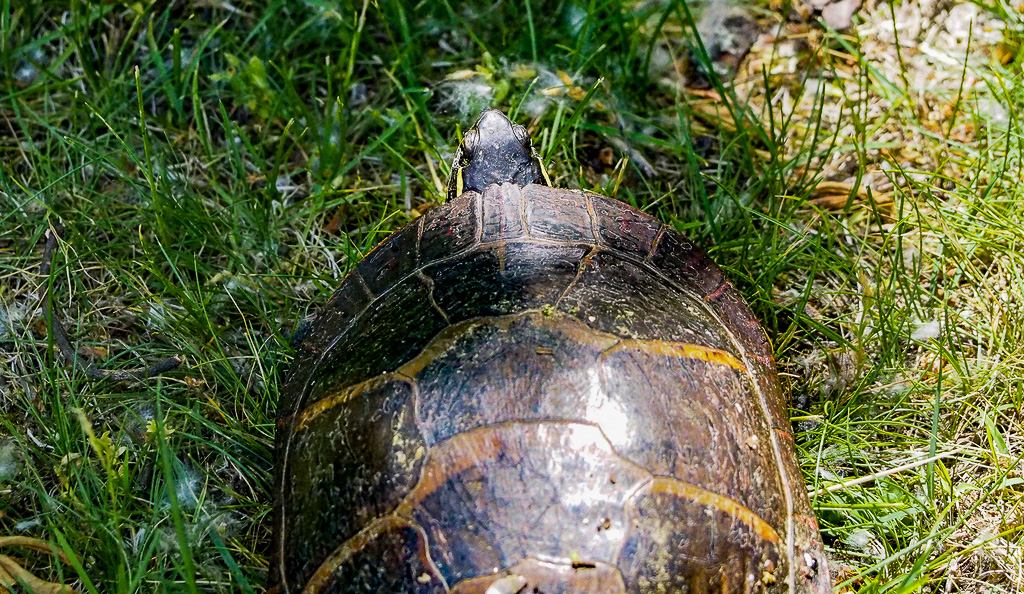 Painted turtles live in shallow rivers or weedy, shallow ponds. They are active during the day and sleep on the bottom at night. They spend many hours each day warming themselves on rocks or logs to regulate their body temperature. Painted turtles often bask in the morning; spend some time eating plants, small fish, snails or frogs; and bask again in the afternoon. As you wander along a river or pond, you might see several turtles piled atop one another at a favorite basking spot.

Painted turtles are aquatic and do not usually come ashore, but females make an exception when nesting in May or June. A female comes onto land, digs a hole about 4 inches deep in a warm, sunny spot and lays about five eggs. Then she pushes leaves and grass over the hole to camouflage it. The eggs incubate for about two and a half months before hatching.

The temperature of the eggs determine the sex of the baby turtles. Warmer egg temperatures produce females; cooler egg temperatures produce males. The temperature within a nest can vary, so a clutch can produce males and females. Scientists fear that climate change might lead to large shifts in painted turtle demographics, perhaps leading to population collapse or even extinction – and turtles are already vulnerable to extinction due to habitat loss. A temperature rise of around 2 degrees Fahrenheit is all it would take for painted turtles to become 100 percent female. Climate models predict that average temperatures in the Boston area will rise by a range of 2.5 to 4 degrees Fahrenheit by 2050. 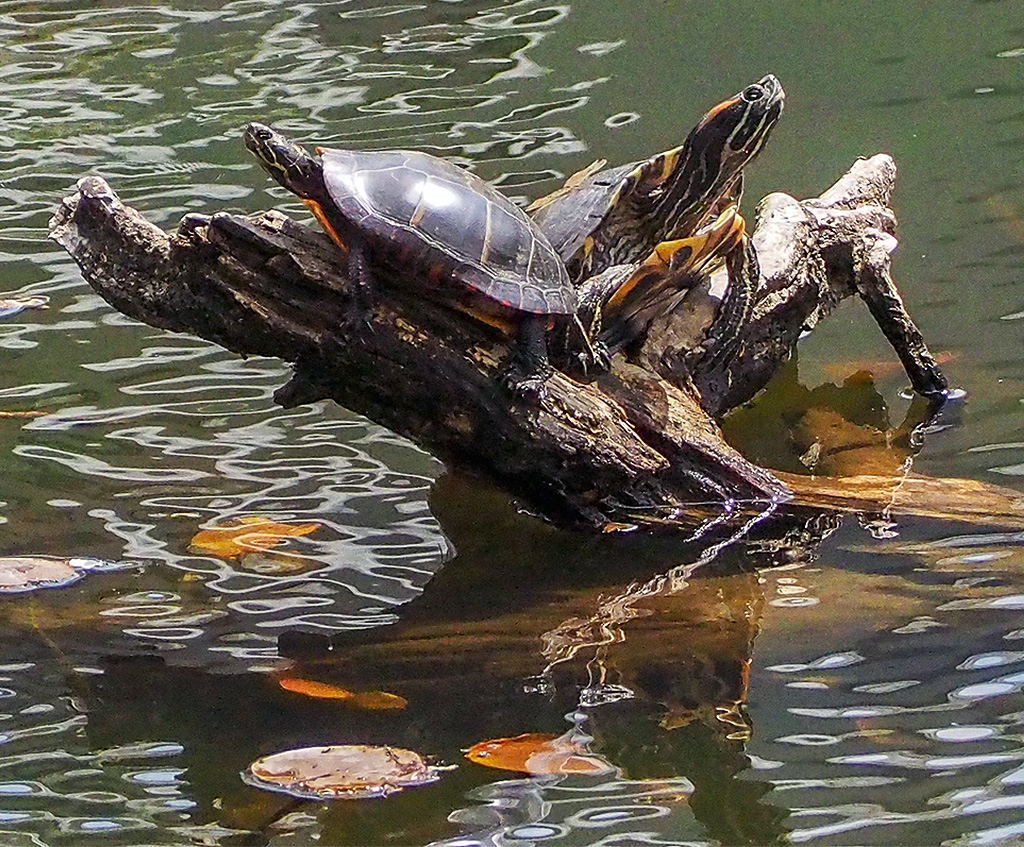 A painted turtle, left, basks with an invasive red-eared slider – a turtle once popular as pets that have escaped or been released all across Massachusetts. It has red marks behind its eyes and is more domed than a painted turtle. (Photo: Jeanine Farley)

Some scientists think turtles could adapt to warming temperatures by laying their eggs in shadier sites or by evolving the ability to cope with warmer conditions. Others are dubious because climate change is happening so rapidly that an evolutionary response is unlikely, especially in animals that live a long time – and painted turtles can live 50 years or more.

Painted turtle eggs hatch in the fall. Some hatchlings may overwinter in the nest and leave the following spring. Unlike adults, painted turtle hatchlings are freeze-tolerant: They are the only reptile and the highest vertebrate life form known to endure the freezing of body fluids during winter hibernation. In other words, hatchlings can survive freezing winter temperatures in their nests.

Eastern painted turtles range from southeastern Canada to northern Georgia and are the most widespread turtle species in North America.

The Washington Post has a simple summary of a painted turtle life cycle that can be watched here.