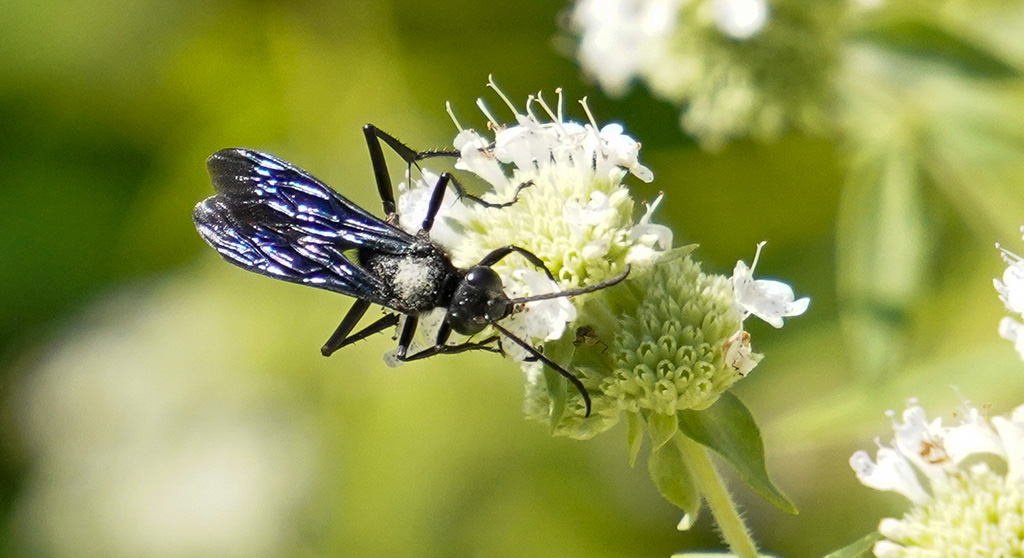 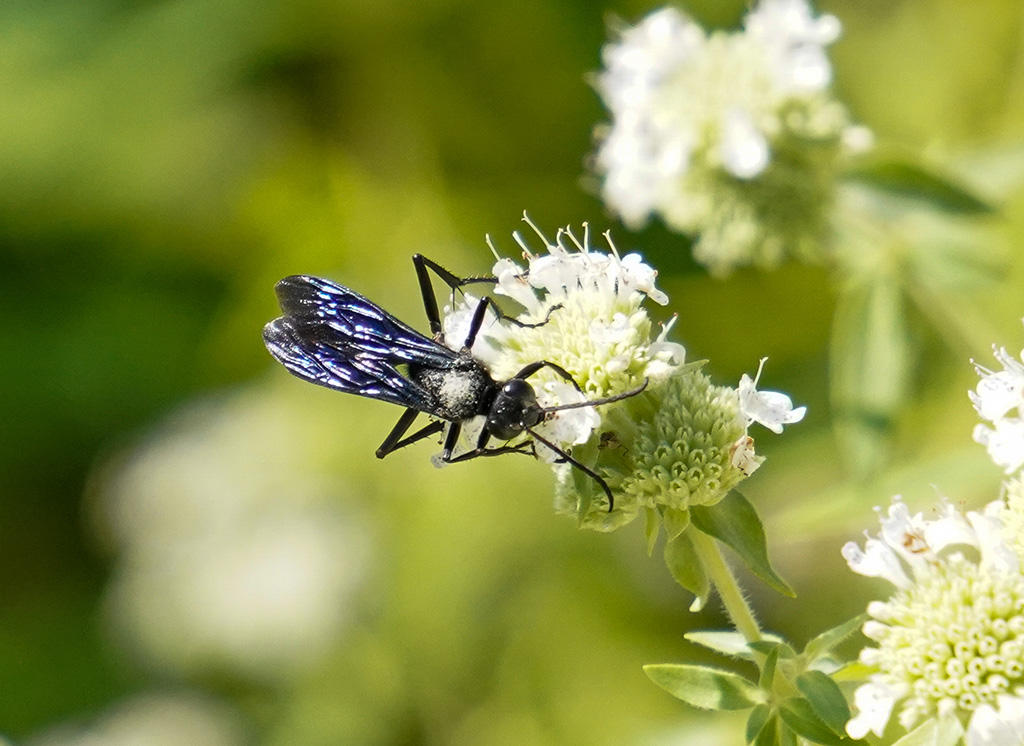 The great black digger wasp is also known as the katydid hunter or the steel-blue cricket hunter. (Photo: Jeanine Farley)

The great black digger wasp (Sphex pensylvanicus) is huge, up to an inch and a half in length, with blue-black iridescent wings. All wasps look menacing, but this one, because of its large size, wins the award for the most intimidating – though in actuality it is solitary and not at all aggressive. The males do not sting at all, and the last thing the females want is conflict: Their goal in life is to reproduce, which they cannot do if they are harmed. (Social wasps, such as yellow jackets, and social bees, such as honeybees, have large colonies to protect, so they exhibit aggressive defensive behaviors. Solitary wasps and bees, on the other hand, are gentle and sting only if provoked.)

This wasp’s primary food sources are pollen and nectar, which makes it a great pollinator, but the female also collects crickets, grasshoppers and katydids to feed her offspring. The female wasp captures prey by stinging it three times, which paralyzes but does not kill the insect. In fact, the stung insect is still able to move its antennae and mouth-parts as the wasp drags it back to her nest as food.

How does this work? Before stinging a grasshopper, a great black wasp female digs a long tunnel with an egg chamber in soft, well-drained soil. Only then does it sting and immobilize a cricket or grasshopper, drag it into a chamber and lay one egg on it. The female wasp then fills the chamber with two or three more paralyzed (but living) insects for the larvae to feed on. The wasp closes the chamber and digs new chambers for her next eggs. When all chambers are finished, the wasp closes the entire tunnel by compacting soil around the entrance. The wasp may use tools to do this. It will pick up a pebble, for example, place it on the soil and press her head on the stone. Then she vibrates her abdomen to function like a miniature jackhammer to compact the soil.

After about 10 days, the grublike larvae hatch. They eat the immobilized insects the mother wasp has buried for them. The wasps pupate underground, and emerge as mature adults with wings. 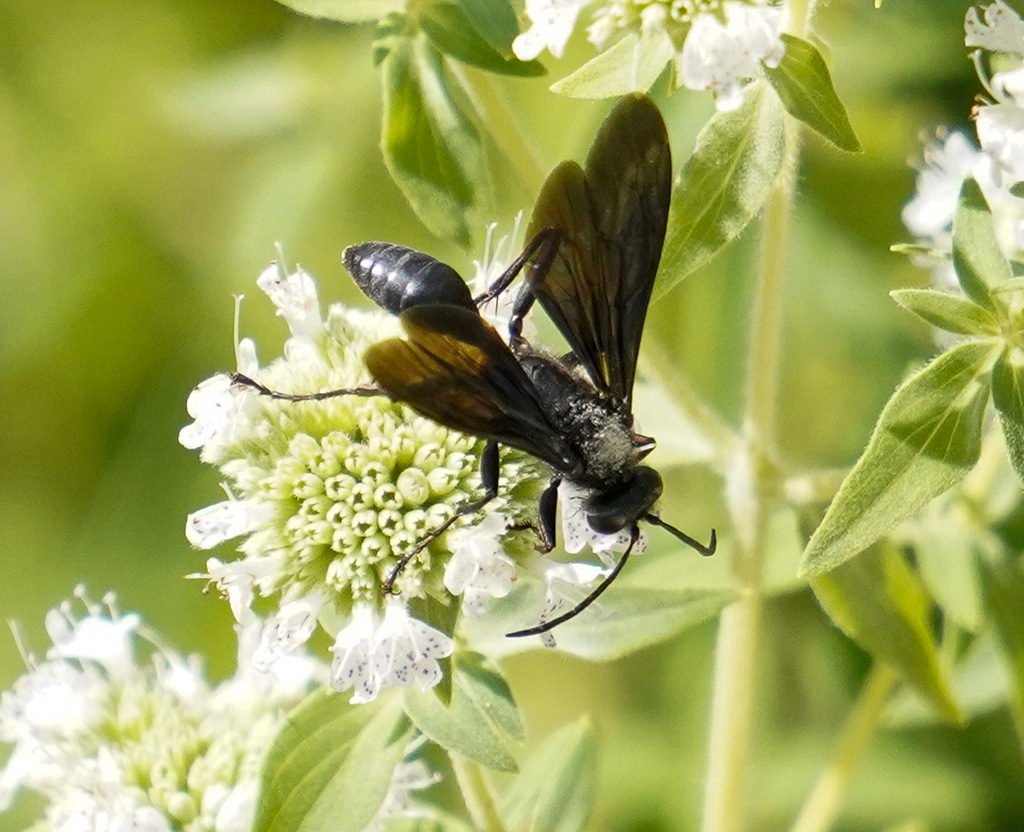 This wasp has two pairs of smoky black wings. The legs and wings provide strength for the wasp to fly away carrying its paralyzed prey. (Photo: Jeanine Farley)

House sparrows and catbirds may steal grasshoppers from a great black digger wasp as the wasp drags the prey to its nest. There isn’t much the wasp can do about this, except to try again.

You might see great black digger wasps in mid- to late summer and into early fall. They are found throughout much of the United States and northern Mexico, except for the Pacific Northwest; during the late 1900s, the range expanded north to Quebec and Ontario. These wasps help pollinate several species of milkweed, goldenrod and plants in the carrot and bean families. The adult wasp usually lives for one to two months before dying. 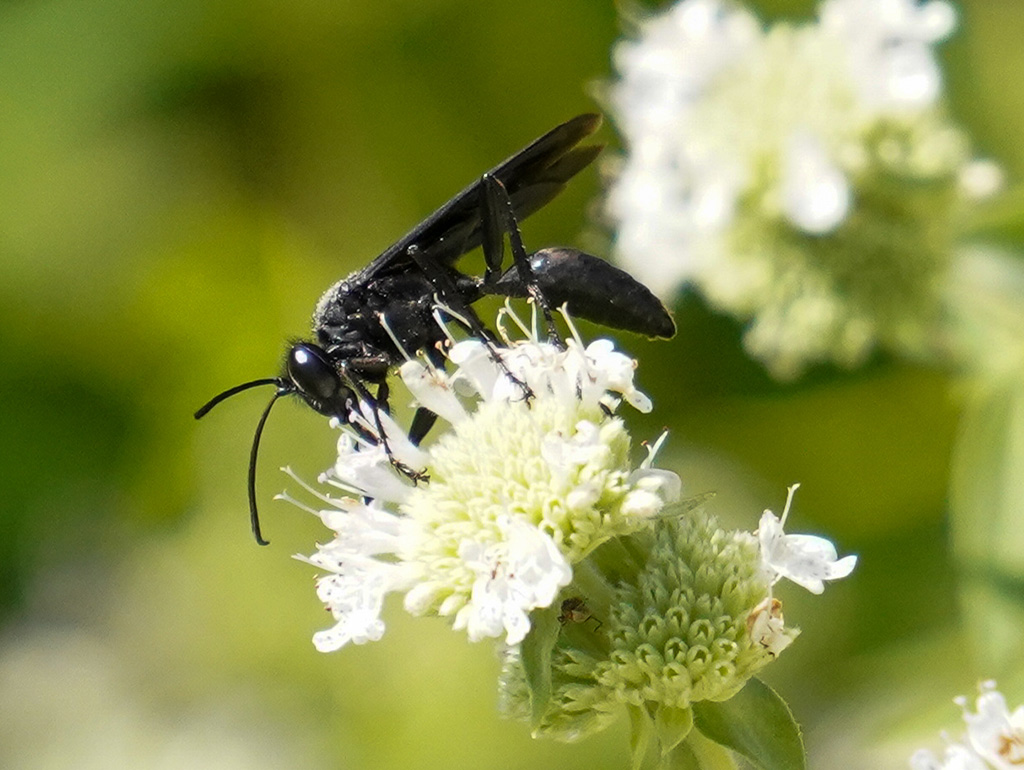 The great black digger wasp is a type of thread-waisted wasp. Observe how narrow and threadlike the waist is between the thorax and abdomen. (Photo: Jeanine Farley)

This remarkable North American wasp has been known and studied for many years. In 1750, an early colonial botanist in Philadelphia, John Bartram, wrote a letter describing the great black wasp to Peter Collinson, a botanist in London.

You will see by the specimen, the size of this Great Black Wasp; it supplies itself with food, by roving about the meadows. . . . But what is more remarkable, is the method of making their nests, and providing for their young.

With great pains and industry they scratch a horizontal hole, near an inch diameter, and a foot long, in the steep side of a bank of loamy Earth; then away the wasp flies, and catches a large green grasshopper, and lodges it in the farther end of her nest; then she lays an egg, and then goes and catches two more, and deposits them with the other, then plasters up the hole. The egg soon produces a maggot. These grasshoppers, by marvelous instinct, are provided for its food, until it changes into its nymph state, in which it lies for a certain period, and then eats its way out, and flies away, seeking its mate.

But what may deserve our farther attention, is the wonderful sagacity of this creature, not only in catching these large grasshoppers . . . but their peculiar skill in disabling them, so as not to kill them; for then they would soon putrify, and be unfit for nourishment. Life sufficient is left to preserve them for the time the maggot is to feed on them.

Three grasshoppers . . . were all taken alive out of one nest; but they had lost their agility: Being secured in a cavity in the Earth, may be a means to keep them living: When exposed to the air, they died in a day or two.

He goes on to add, perhaps from firsthand experience poking about in wasp nests, “the sting of this wasp is painful, but does not swell like others.”