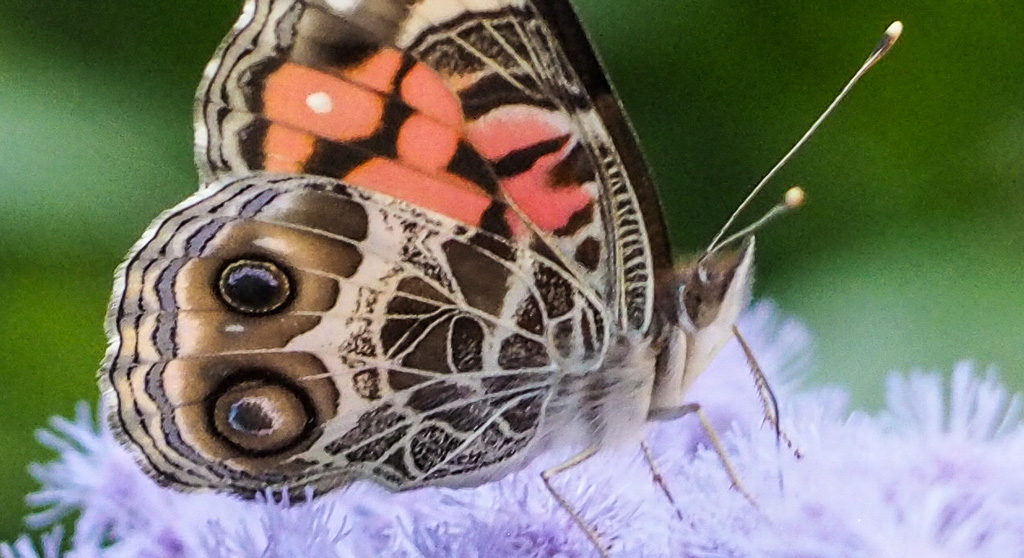 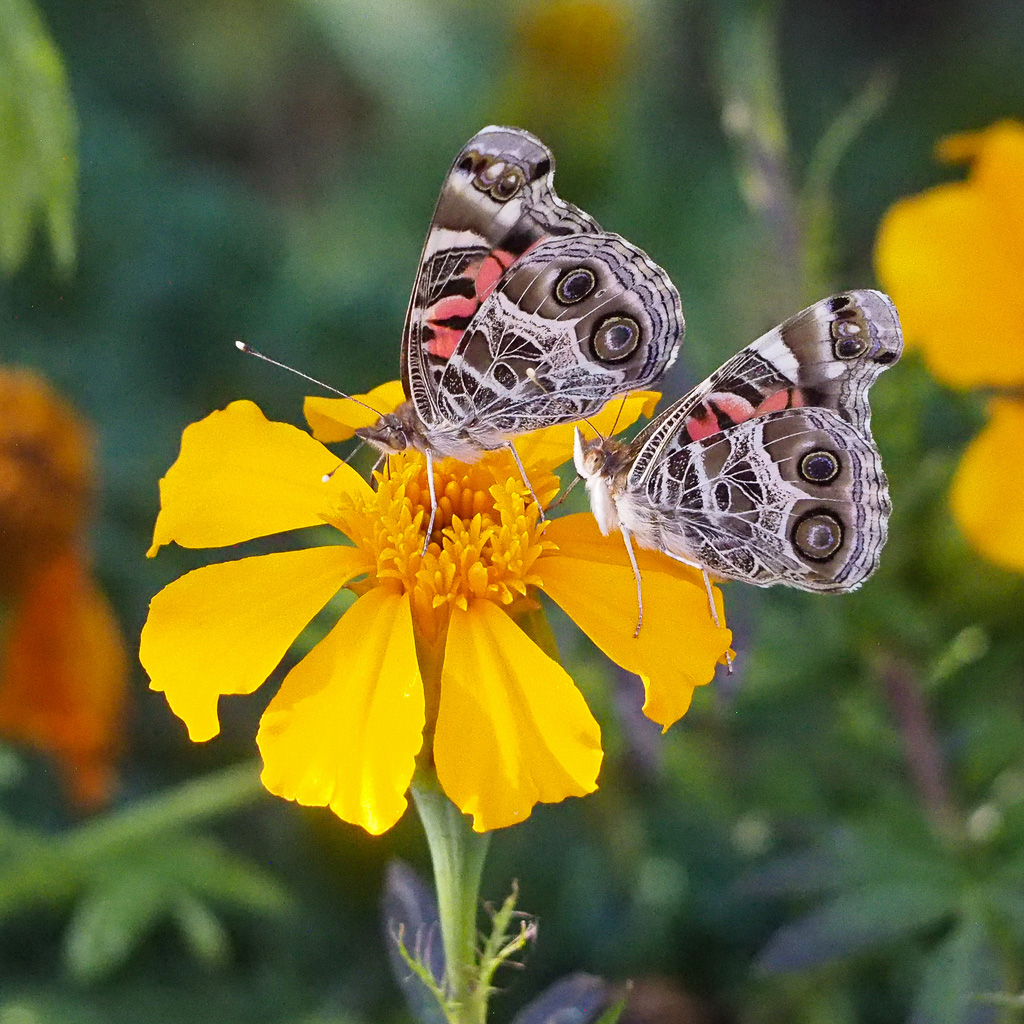 American ladies, like all butterflies, have taste receptors on their feet. This enables them to know whether to drink a plant’s nectar just by landing on it. (Photo: Jeanine Farley)

Unlike many other butterflies, when the weather turns cool American lady butterflies (Vanessa virginiensis) do not migrate south to warmer regions. They die out in our area and rely on their southern relatives to migrate back north in the spring to repopulate the territory. These beauties can travel up to 100 miles per day, and they are one of the earliest spring butterflies to arrive in Cambridge. You still might be able to see some of these butterflies in September if the weather is warm enough.

American lady butterflies have two large eyespots on each hindwing. Animals often evolve patterns to help camouflage themselves from predators, but eyespots make butterflies stand out. Why would American ladies want to stand out? 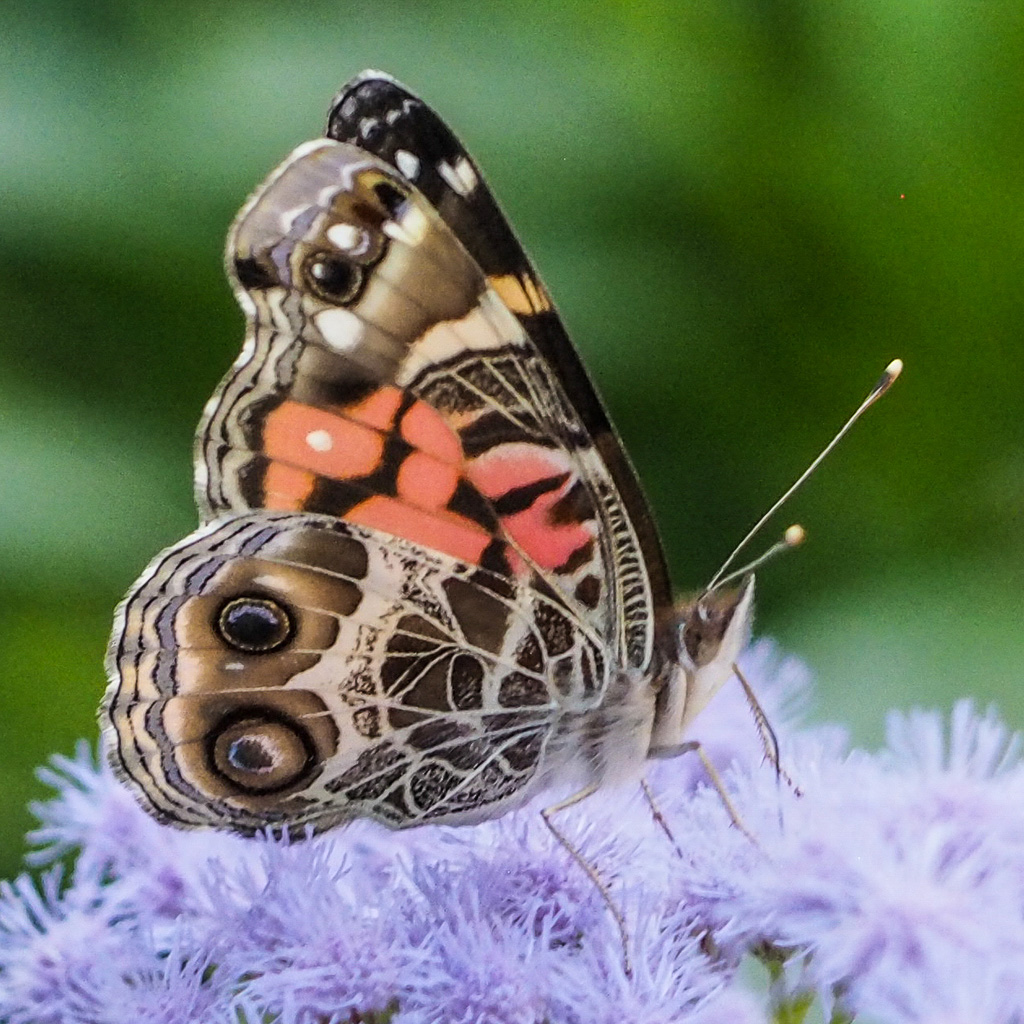 A butterfly’s flight may look erratic, but its large wings help it maneuver quickly to avoid predators. (Photo: Jeanine Farley)

Although adult American ladies prefer nectar from flowers, they will also feed on sap or rotting fruit, as they are not specialists like monarch butterflies. Male American ladies – is that an oxymoron? – sometimes sip water from damp soil or mud. Females fly low in search of ground-hugging plants that make good hosts for their caterpillars, such as pearly everlasting and pussytoes.

American lady females lay single green, pinhead-sized eggs on the upper leaves of host plants. The eggs are very small and blend in well with the green leaves, making them hard to see. The eggs hatch into caterpillars in three to five days. The caterpillars sew together bits of seed fluff or leaves to make nests on their host plants that they rest in when not eating. The nests are best seen in the early morning when sunlight reflects off the morning dew they collect. 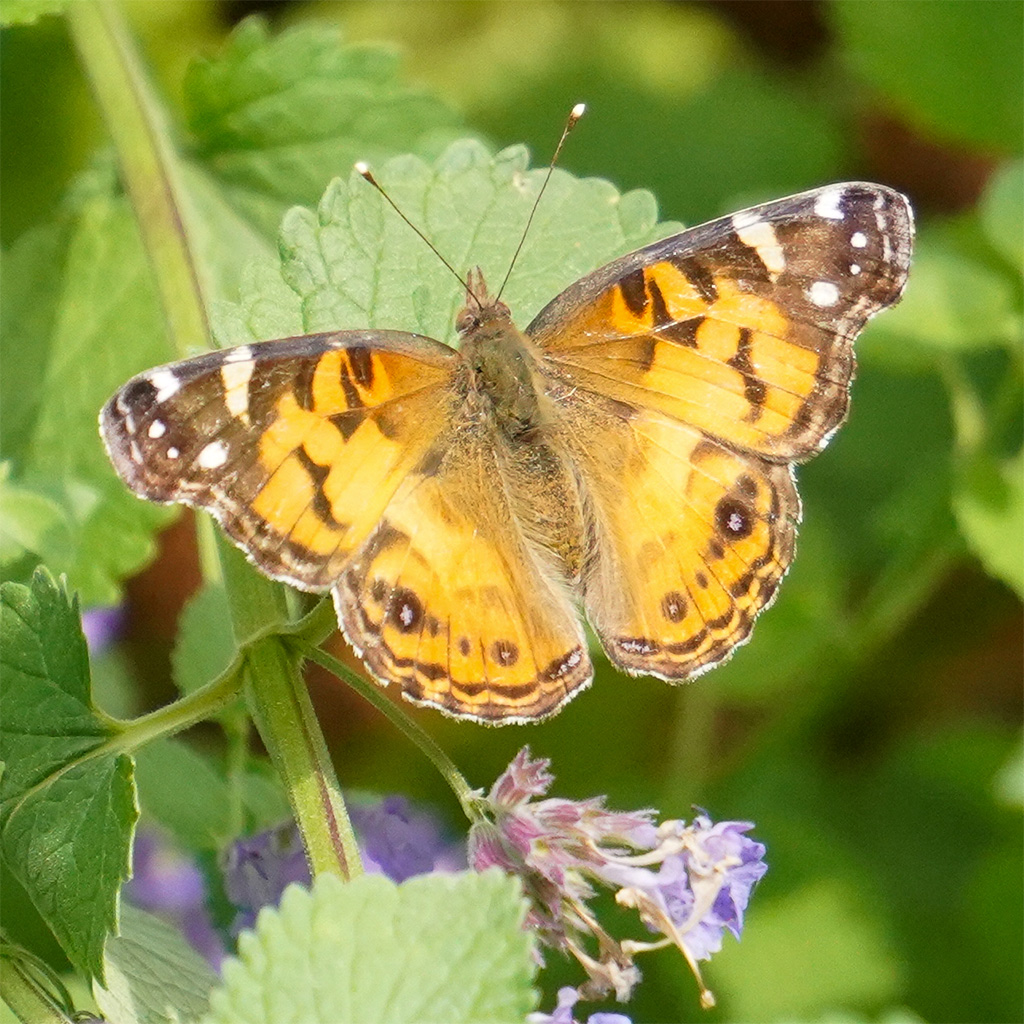 The view from above is so different from the side view that you might not realize at first this butterfly is an American lady. (Photo: Jeanine Farley)

American ladies, like all butterflies, do not have lungs. They breathe through tiny holes on the sides of their bodies (spiracles). The holes open into a system of tubes (trachea), which carry the oxygen throughout their bodies. Butterflies are cold-blooded and require warmth to activate their flight muscles. Generally, butterflies will not fly when temperatures are below 55 or 60 degrees Fahrenheit.

How does climate change affect these butterflies? This subject has not been well studied, but it is known that as temperatures increase, some butterflies reproduce earlier. Unfortunately, their caterpillar host plants often do not mature earlier, so there may be a mismatch between when caterpillars hatch, needing to eat, and when host plants are available for munching. This mismatched timing can upset the entire food web – from caterpillars to birds to even larger predators.