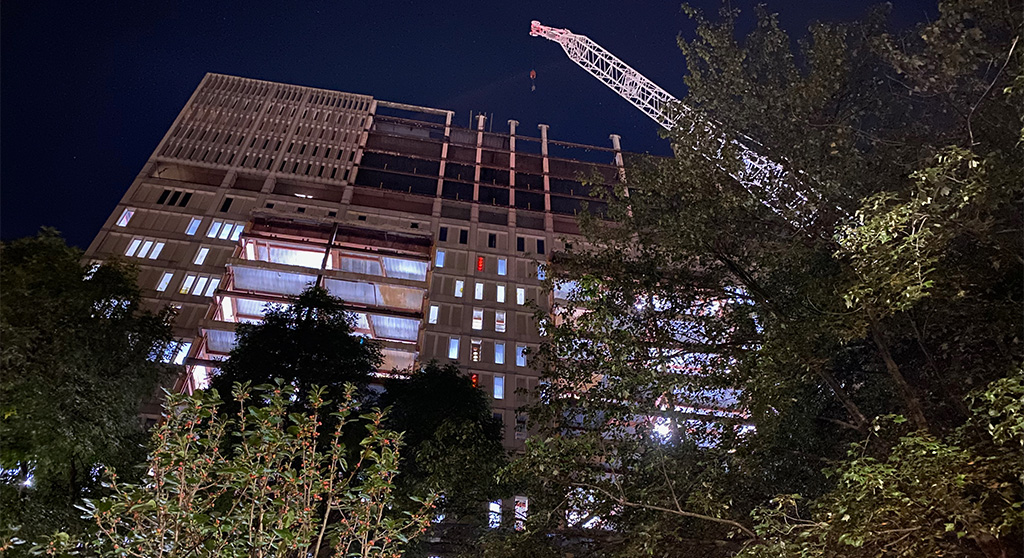 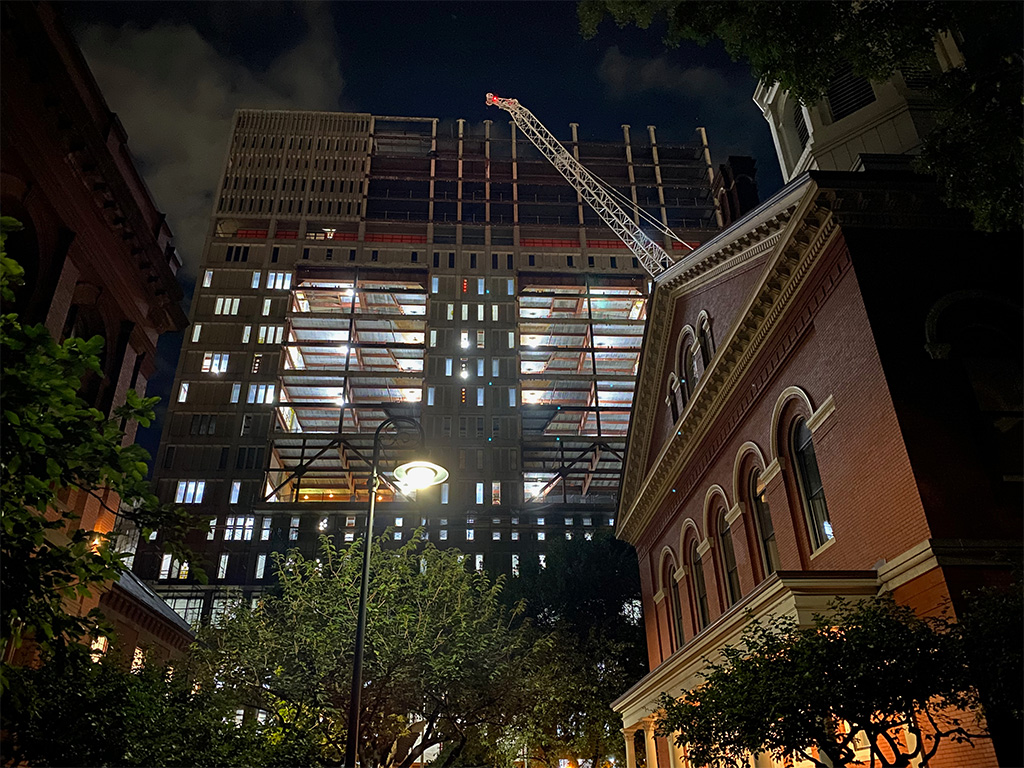 Work on East Cambridge’s decommissioned courthouse is seen from across the street Thursday, the last night of work allowed after business hours. (Photo: Marc Levy)

A bid to keep working into the night constructing the 40 Thorndike office tower project in East Cambridge was rejected unanimously Thursday by license commissioners, who didn’t see the hardship demanded for the variance.

If granted, the variance would have allowed work to extend after business hours until 11 p.m. every day but Sunday. (The License Commission’s agenda showed the request going until 10 p.m.) A current variance was to expire Thursday, only hours after the commission’s rejection.

The commission’s decision likely took developers Leggat McCall and Granite by surprise. A section of the project’s website for construction updates shows a post from before the meeting advising residents that “second-shift activities (6 to 11 p.m.) and selective Saturday work will continue to take place through February 2022.”

The question of the hardship came up a few times during the hourlong License Commission hearing, but Ed LaFlore, a principal for Burlington’s CSL Consulting, never had an answer that satisfied fed-up neighbors listening by Zoom or the three-member board.

“The hardship is the condition of the building and a lot of the dynamics associated with making sure that we can do the work in a safe environment for the workers,” LaFlore said, “as well as to push the project to minimize any future, unforeseen conditions that could lengthen the duration of the project.”

Acting police commissioner Christine Elow, taking part in her first License Commission hearing since her appointment, asked how much of the need was about worker safety and how much was about “wanting to move the project along faster,” and LaFlore made an argument about the complication of the project and number of workers on site.

The reply didn’t convince licensing chair Nicole Murati Ferrer. Though during rougher patches of the Covid pandemic the commission had given “a little more leeway” for variances to provide social distancing and make up for smaller crews, that moment has passed for what commission staff described as “an extension on an extension.”

Elow and acting fire chief Gerard Mahoney agreed with her summation that the request for additional hours seemed more about logistics.

Part of LaFlore’s argument was that the night work was quieter preparation for the crews that showed up to begin work promptly at 7 a.m. six days a week, and that in comparison with construction during the day, it drew no complaints – a claim softened to admit that there were just far fewer complaints. The final hour of work was just cleanup and removal of materials, LaFlore said, and the company didn’t intend to use the variance for Saturday. And there were a few supporters among the public who said during the call that they agreed with the underlying idea of efficiency. East Cambridge’s Mark Tang said he liked the idea of “eliminating yet another construction project within our neighborhood … so that we can all have peaceful days and peaceful evenings.”

The number of residents with complaints about frequent use of air horns and other noise, vibration, trucking and 7 a.m. starts was greater, though, and more bitter, with worries about the long-term effects of sleep deprivation after long periods of being “literally hemmed in every side” by construction. Resident Seth Diamond pointed to construction also taking place at the Millers River Apartments, at Lechmere and Gore Street, at Metropolitan Pipe and on the Volpe parcel.

Resident Hilary Ginsburg felt approval by the commission would “set a terrible precedent for after-hours construction [when] we need to protect the evening hours.”

A proposal by Mahoney that looked for a middle ground – that work be allowed to 11 p.m. through October while CSL hired acoustical engineers to resolve noise issues – wasn’t picked up on by the other commissioners.

“They’re just fed up with the continuous construction, not only at this location, but in surrounding areas,” Murati Ferrer said of the East Cambridge residents.

Unmentioned during the hearing was that CSL’s request was at odds with claims about the project from Sept. 15, when an email from the developers called “interior demo and abatement nearing completion.” The request for a variance asked for an another five hours a day for potentially six days a week for another five months “to perform interior demolition and abatement.”

A request for an explanation was made Wednesday, but by Thursday evening there was no response.

The project is a renovation of the former 1970s-era Edward J. Sullivan Courthouse, which has been empty since June 2014 and deteriorating under the watch of the state Division of Capital Asset Management and Maintenance – to the point that residents living nearby worried about their health. A lawsuit and appeal, and then a battle over the parking disposition, delayed work at the courthouse by the developer, but LaFlore confirmed Thursday that the project is on track to open in the fall of 2023, but said the work advancing so quickly was “due to our ability to use these variances to do the work in the evening.”

Construction began in 2020 on the project, a 475,000-square-foot, 20-story office tower with 48 units of housing and retail space on its second and third floors.