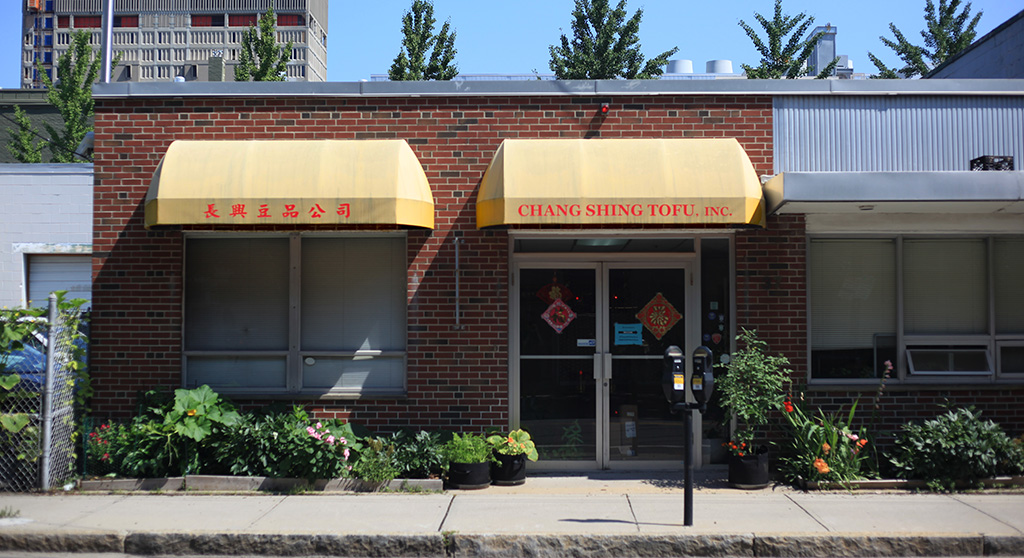 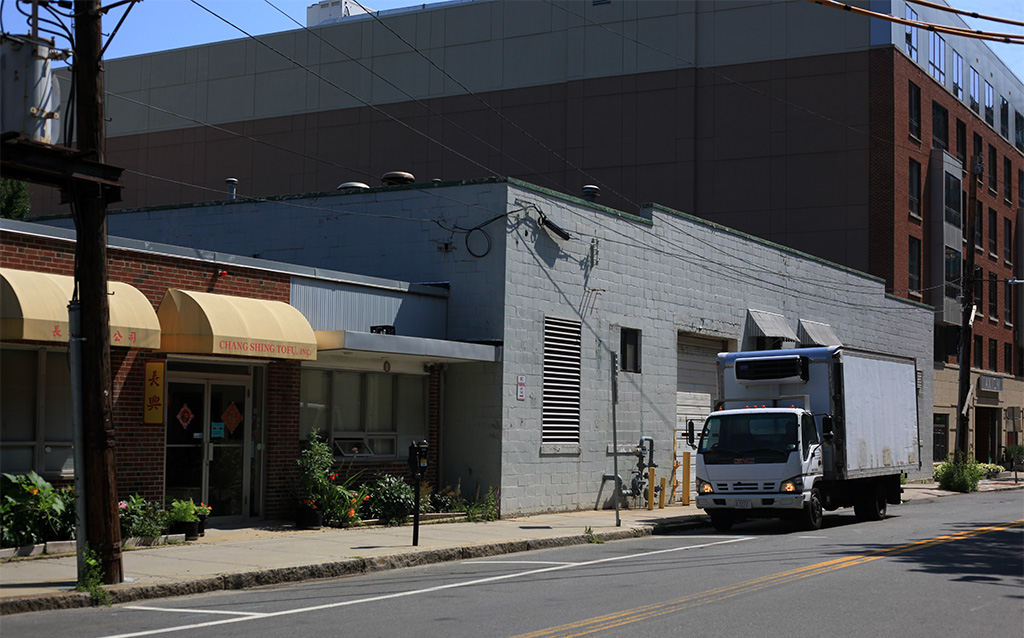 The Chang Shing Tofu factory is next to Axiom apartments, where some tenants are unhappy with the manufacturer’s truck noise. (Photo: Daniel Wang)

Though Cambridge was once famed for its factories, the manufacturing and wholesaling base has shrunk over the decades to a handful of businesses surrounded by homes and office buildings, and at times they can feel like the interloper.

It’s easy to forget the city has manufacturers at all.

Chang Shing Tofu is tucked away down Rogers Street in East Cambridge, behind Toscanini’s ice cream on First Street and Axiom, an apartment building where a one-bedroom unit rents for more than $3,240 monthly. Those who know of its inconspicuous retail “storefront” treat it as an open secret spread by word of mouth and platforms such as Google Maps and Yelp, where they describe it as a high-quality product cheaper than what’s sold at H-Mart, a chain Asian supermarket in Central Square.

Individual customers who stumble into Chang Shing can buy fresh tofu on the spot off a small menu posted on the wall. But what’s at 37 Rogers St. is a factory: Beyond the office door are a few workers, freezers and product – the company makes different textures of raw tofu, fried and spiced tofu, and soy milk – waiting to be packaged for sale or loaded onto trucks on its way to distributors, supermarkets and restaurants. 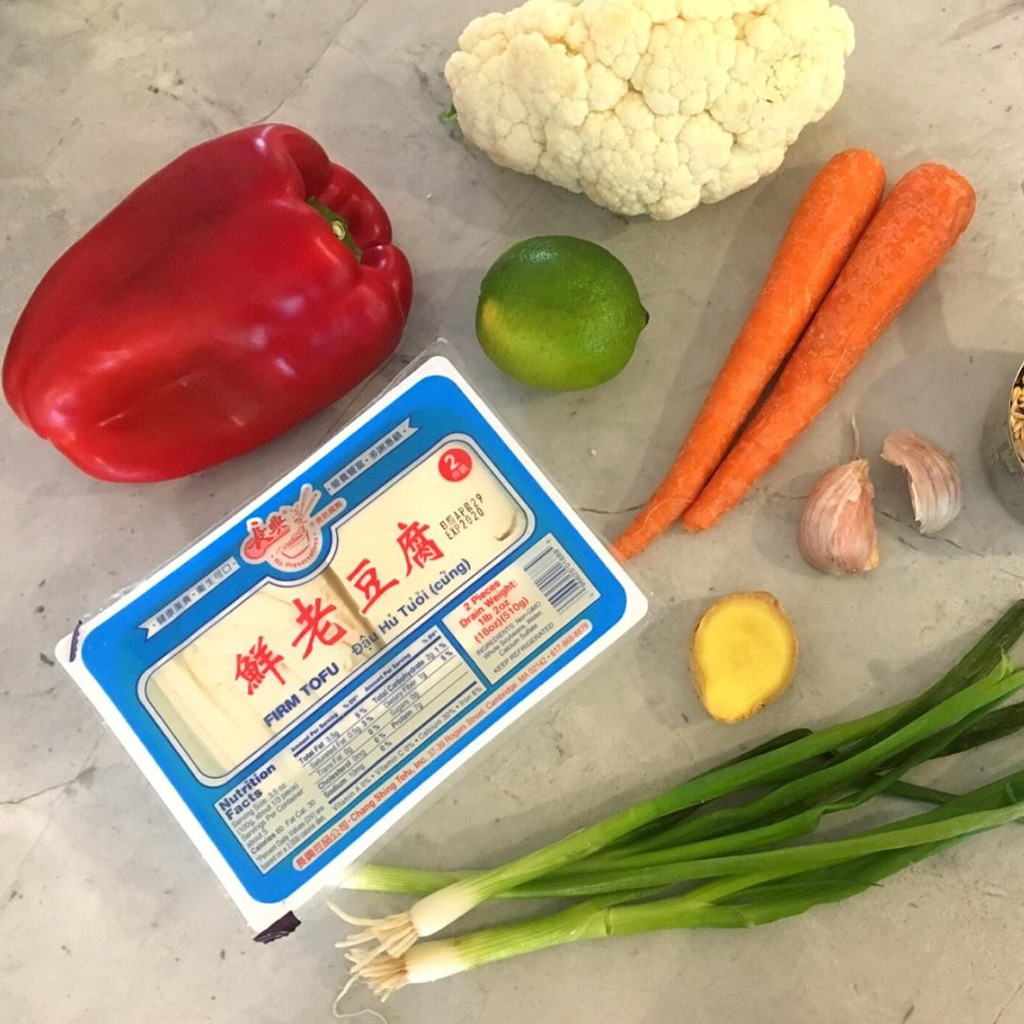 Chang Shing Tofu is sold at the Daily Table grocery store in Central Square, where managers said a taste test “wowed” them with superior texture and flavor. (Daily Table via Instagram)

Daily Table Grocery, a Boston nonprofit grocer with a location in Central Square, chose Chang Shing as its tofu supplier in 2019. Chang Shing has been a “reliable partner … able to provide us with a fair price that allows us to sell tofu that is affordable, locally produced and high-quality,” Daily Table product sourcing specialist John Rangos said.

When restaurants shut during the early days of the pandemic, Chang Shing provided the grocer with tofu that would have otherwise gone to waste. Daily Table offers 18 ounces of firm tofu for $1.99.

The company started out in Somerville in 1987 before moving to Cambridge a decade later to expand, said operations manager Jenny Dao – the daughter of the founders.

In the more than 20 years since Chang Shing moved, Dao says, East Cambridge has changed rapidly.

“It used to be very industrial,” with buildings that were home to pipe fitters and other factories, Dao said. For the past three to four  years, however, the company’s neighbors have been Axiom, which markets itself to renters with its easy access to MIT and Kendall Square, where the biotech industry has presented Chang Shing with “a lot of disruption.”

As developers such as Alexandria build office and lab space, working-class residents are replaced by those in academia and technology – though Dao said she knows a few professors who stop in to buy Chang Shing tofu.

Newer residents may not be used to the few manufacturing businesses that remain and the noise and foot traffic that come with them. Some tenants are not happy with having two large trucks near the working area, Dao said.

Though the upheaval of the neighborhood has presented challenges, city government has always been supportive of the business. “The city itself has always been great,” Dao said.

Once a manufacturing center 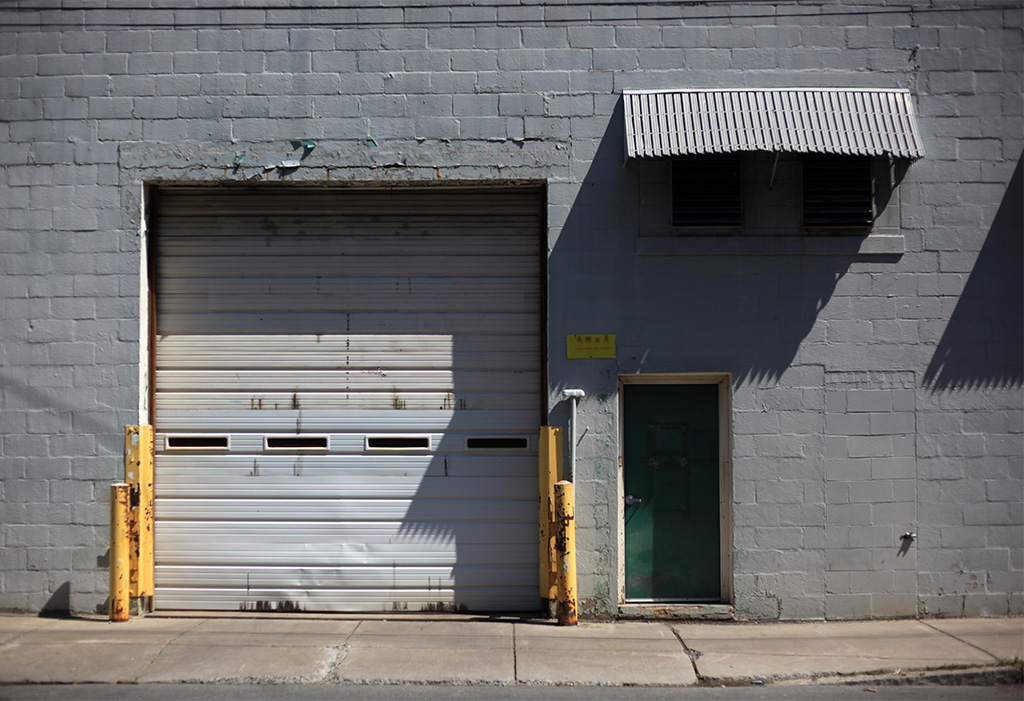 From the mid-19th century to World War II, Cambridge served as an important Eastern Seaboard manufacturing center. Initially, companies were drawn to the city’s undeveloped land, well-connected rail and maritime routes and its proximity to Boston, local historians say. East Cambridge’s growing immigrant population also fueled the growth of industries and attracted larger factories, and Cambridge became a hub for industries from rubber products and automobiles to confectionery.

From the 1950s to the 1980s, companies began to leave for areas with lower labor costs. Empty lots were bought by MIT, technology companies and developers, marking the city’s post-industrial transition to the services sector.

Today, while some signs of industry are still visible on Massachusetts Avenue near Albany Street, few factories remain. A notable remnant of Cambridge’s industrial past is the Grand Junction railway, which was opened in 1855 to connect East Cambridge with nearby industrial centers. Now defunct, a part of the land it ran past – the Metropolitan Pipe & Supply plant on Binney Street – was acquired as recently as 2017 by Alexandria for construction of a multi-use path. 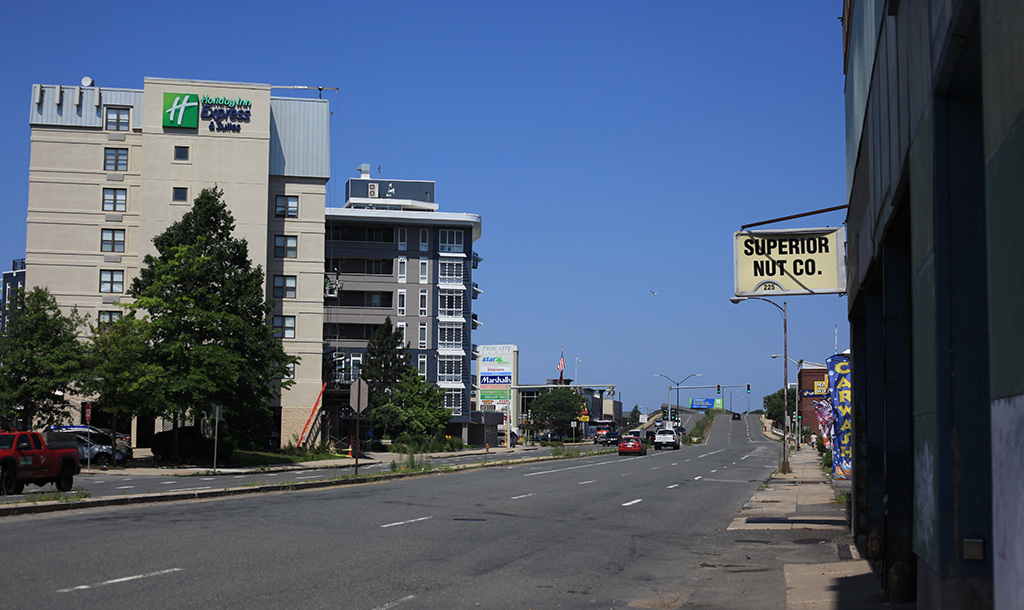 Superior Nut in East Cambridge has two hotels as neighbors, reflecting a change from manufacturing and wholesaling to tourism. (Photo: Daniel Wang)

Mayflower Poultry shuttered its doors Aug. 27 at 621 Cambridge St. in East Cambridge and moved to Boston, forced by a sale of its property. It opened in 1932 and traded hands from Richard C. Silver to current owner James Gould in 1996, Gould said in August, recounting how from then to around 2011, the numbers of people coming for actual fresh poultry dwindled and he shut down retail butchering to go almost entirely wholesale. (It lived on mainly in an attention-getting 6-foot storefront sign and logo proclaiming Mayflower had “live poultry fresh killed,” trademarked in 2005 to sell on T-shirts and other merchandise.) The move to 139 Newmarket Square, Boston, shifts the business even more toward wholesale, though longtime worker Luis Feliciano said individual consumers will still be welcome at Mayflower if buying at least 10 pounds of meat.

Not far from Chang Shing is Superior Nut, 225 Monsignor O’Brien Highway. Founded in 1929 in Somerville’s Ball Square, the firm moved to East Cambridge in 1979 but says it continues to serve wholesale clients throughout the United States and internationally. Its neighboring manufacturing facility, Genoa Packing, was demolished in 2013. The lot is now home to a Marriott Fairfield Inn, which is across the street from a Holiday Inn; both serve Cambridge’s business visitors and tourists, which reportedly number in the millions annually. 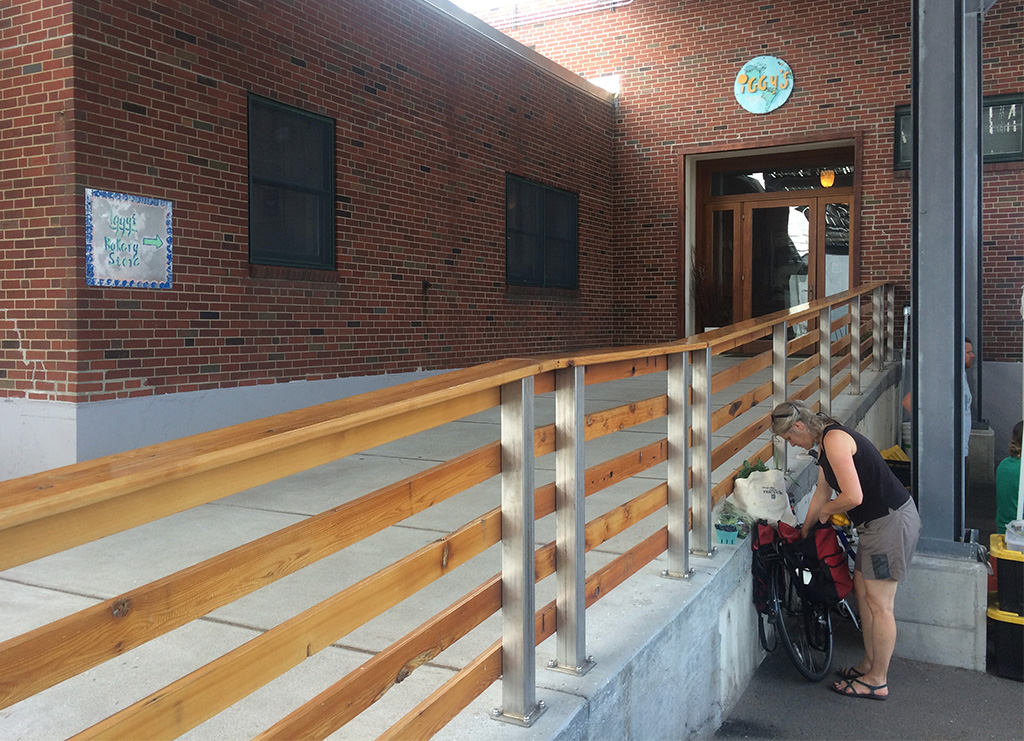 A farm share customer packs up produce from a stand set up Aug. 1, 2017, at Iggy’s Bread of the World in the Alewife Quadrangle. (Photo: Marc Levy)

The Squirrel Brand Nuts factory at 12 Boardman St., The Port, became an apartment building in 2001, but Cambridge Brands, a subsidiary of Tootsie Roll, remains at 810 Main St. in The Port, making more than 15 million Junior Mints a day.

On the other end of the city in the Cambridge Highlands is the “Quadrangle,” a cluster of industrial firms and tech companies off Concord Avenue that includes Iggy’s Bread of the World, founded in 1994 by Igor and Ludmilla Ivanovic. Based at 130 Fawcett St., it has around 100 employees and sells to restaurants and grocery stores across the region; when a Whole Foods Market opened in June in Portsmouth, New Hampshire, Iggy’s was stocked in the bakery.

But around the corner from Iggy’s 130 Fawcett St. plant, on the lot that formerly housed Oriental Furniture, is a luxury apartment building nearing completion called The Brook. One-bedroom units start at $2,500 a month.