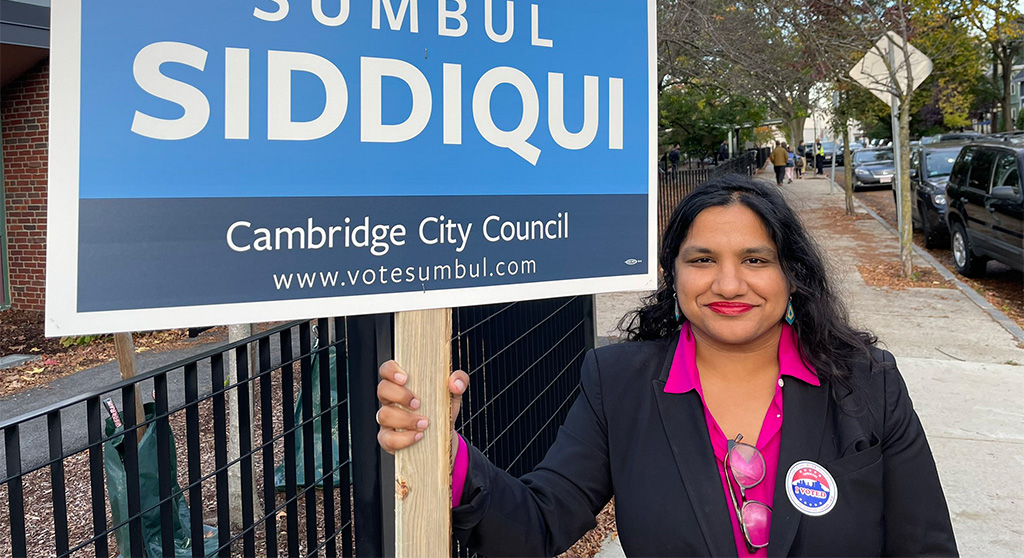 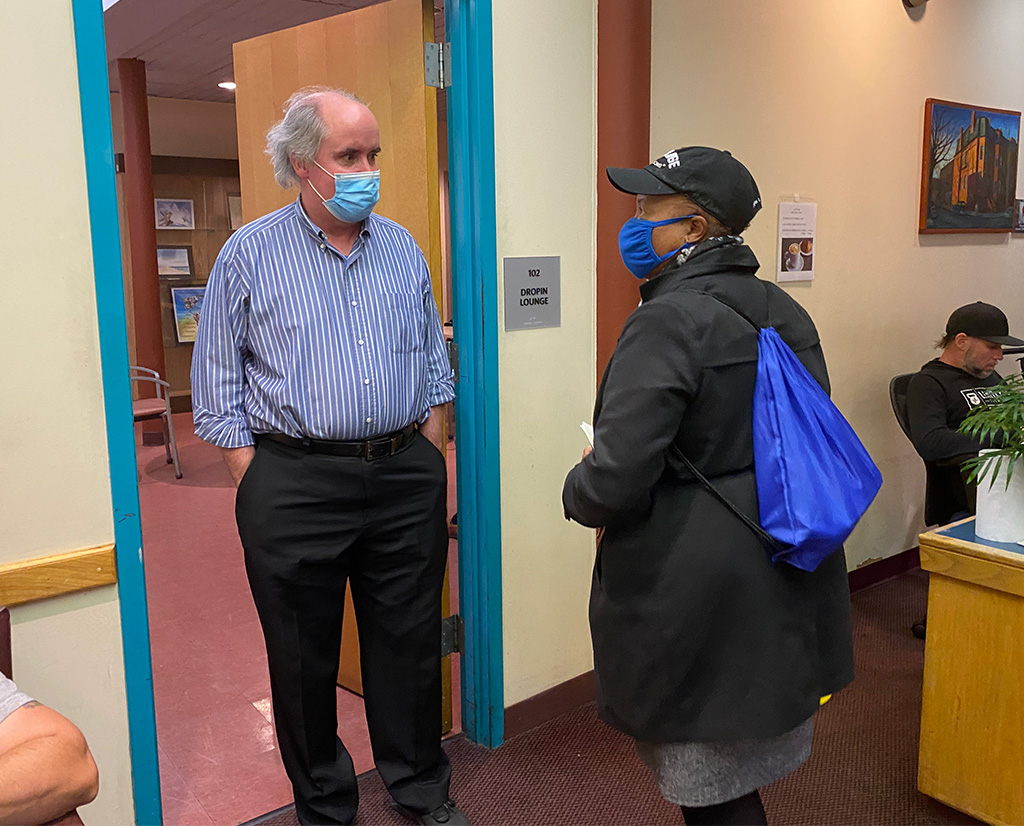 Challengers Paul Toner and Burhan Azeem were elected to the City Council and incumbent Jivan Sobrinho-Wheeler was defeated in a preliminary count completed at 1:10 a.m. Wednesday, while newcomer Akriti Bhambi was elected to the School Committee.

That returns seven incumbents to the nine-seat council for the two-year term starting in January, when they will have to hire the next city manager and grapple with continued housing pressures. Five incumbents will return to the six-seat committee, which must complete a return to normalcy after two years of pandemic.

Voters also passed three ballot questions dealing with the city charter, which hasn’t been updated since adoption 80 years ago. Their passage means the next council will have new powers to confirm all people named to boards and commissions by the city manager and must undertake a more sweeping review of the charter for potential changes. They are also required to do annual reviews of the manager.

Pandemic restrictions meant there were fewer candidates than usual attending the count by the Election Commission and its staff in the Citywide Senior Center in Central Square – in fact, the only candidate present was Caroline Hunter, who ran for School Committee – and the late hour of returns meant little reaction on social media.

“I’m so honored,” Azeem tweeted only minutes after results were made public. Toner’s social media was silent overnight.

Among incumbents returning to the council, Patty Nolan certainly had the liveliest response: She posted a video to Facebook of her dancing in delight to her reelection and the passage of the ballot questions, which resulted from a process she spearheaded in her first term on the council. “So thrilled that I won and that all three ballot questions passed resoundingly,” she said, adding on Twitter that having all three questions pass was “fantastic results … I worked hard to bring change to our city charter. Thrilled to see the results.”

Incumbents Marc McGovern and E. Denise Simmons were more subdued. “I am so honored to be returning to the City Council. Congratulations to everyone who ran. It is not easy to throw your hat in the ring,” McGovern said. “I promise to do my best to be a bold, compassionate leader for our city.” Simmons said via Twitter that after what she feared was a “very tight race,” she was “thrilled to be heading back.” 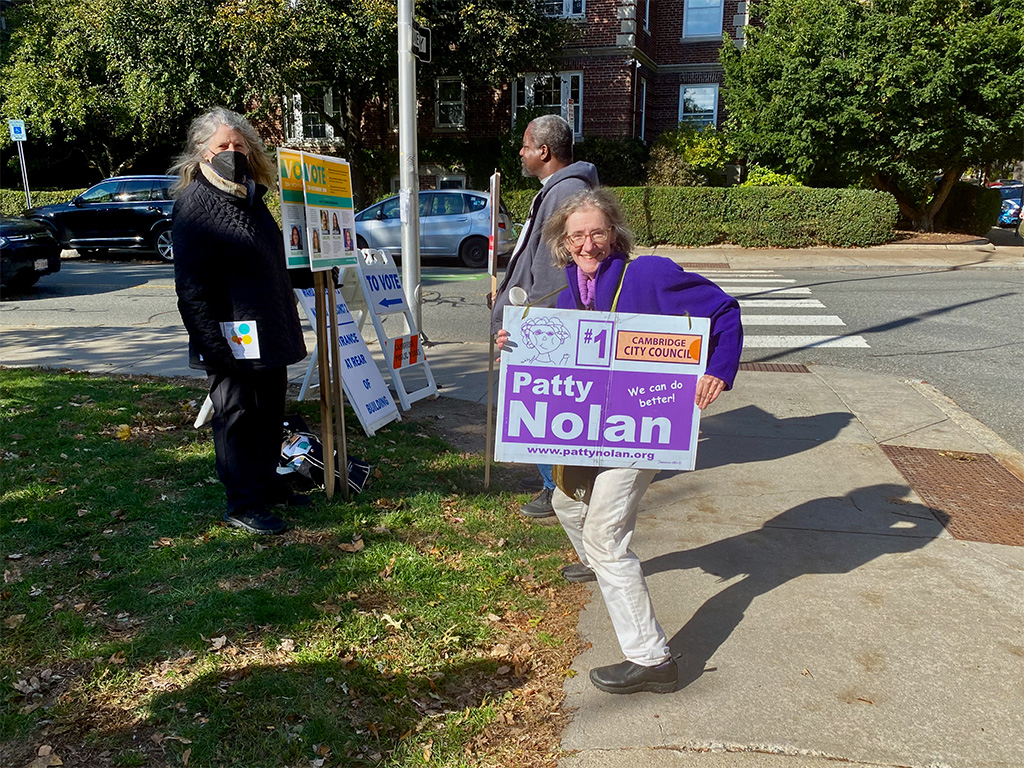 City councillor Patty Nolan during a visit Tuesday to the polling place at the Graham & Parks School. (Photo: Marc Levy)

Mayor Sumbul Siddiqui only added to her No. 1 votes from two years ago, making a giant leap to 3,861 top-ranked votes in the preliminary count from 2,431 despite there being fewer ballots cast this year. She was once again the only council candidate to immediately achieve the “quota” needed to be elected in Cambridge’s proportional representation, ranked-choice form of voting. Simmons, who had been the second-highest vote-getter two years ago, dropped by 274 moving into her 11th term in office; Nolan moved ahead of her with 1,831 top-ranked votes for her second term as a councillor.

Challengers who didn’t win a council seat in this election were philosophical. Joe McGuirk, running for the first time, wrote ahead of learning the results that “It has been an amazing experience and regardless of the results, I am so very glad I ran. I have met incredible people, spoke with so many fellow residents, and learned so much.There are so many wonderful people in Cambridge. We are all fortunate to live here.”

Robert Eckstut, a poker player who spoke with arch humor during candidate forums and in questionnaire responses, continued his blunt approach as election results rolled out: “Looks like I’m getting crushed … I didn’t expect to do well, but damn! Expected more than that. Oof,” he tweeted. “Based on my vote counter and prelim stuff I expected a bit more than 100 with an average of 200; looks like I ended around 70. Oops!” 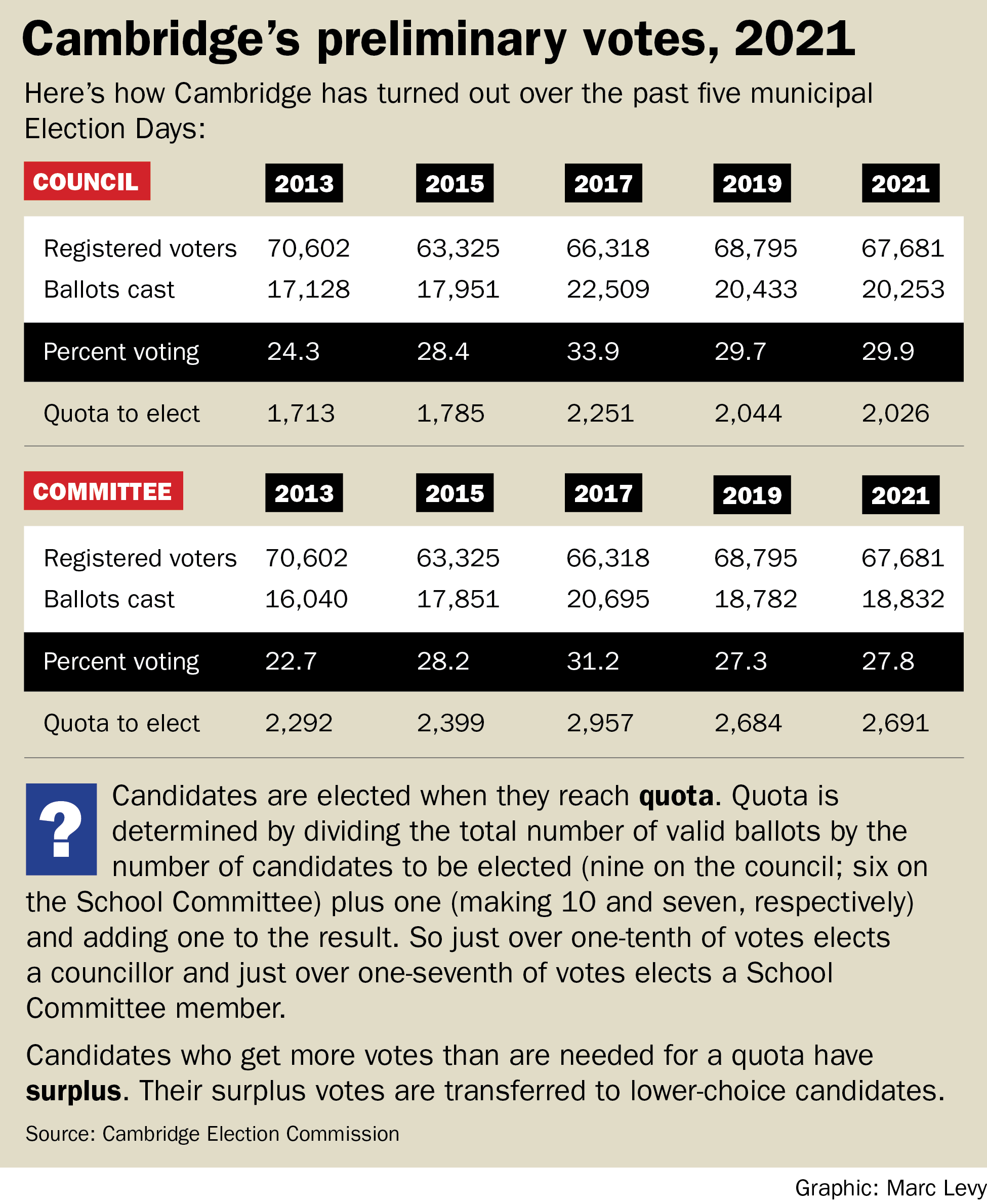 On the School Committee side, Ayesha Wilson actually topped Siddiqui, getting at 3,968 top-ranked ballots for her second term in office with fewer overall voters for the year and in the committee race. It was accomplished without mailers or digital advertising, she said Wednesday morning.

“This means that this win belongs to volunteers who knocked on doors, made calls and shared my campaign with their families and communities. I heard from a number of voters this year who were worried about the role of money in Cambridge elections, but with around $10,000 in spending, we won more No. 1 votes than anyone in Cambridge in 30 years,” Wilson said. “I’m also very excited to welcome Akriti Bhambi to the Committee and to continue serving with my colleagues Fred Fantini, Rachel Weinstein, Jose Luis Rojas Villarreal and David Weinstein.”

Wilson was followed by its longest-serving member, Fred Fantini. He will be serving his 20th term in officer. Bhambi, running for the first time but with a background in health public policy and experience as chief of staff for state Rep. Marjorie Decker, was third at 2,824 top-ranked ballots.

Committee candidates were silent overnight on social media, but Hunter took it in stride when learning at the vote count that she had been edged out by incumbent Jose Luis Rojas Villarreal, whose No. 1 votes numbered just 106 more than her own. But she has a long history of fighting for social justice from outside the seat of power – in 1970, as a new employee at Polaroid, she spotted the company’s involvement in abetting South Africa’s notorious apartheid government and alerted her co-workers. She and future husband Ken Williams lost their jobs but ultimately succeeded in shaming the company into abandoning its business with the country. 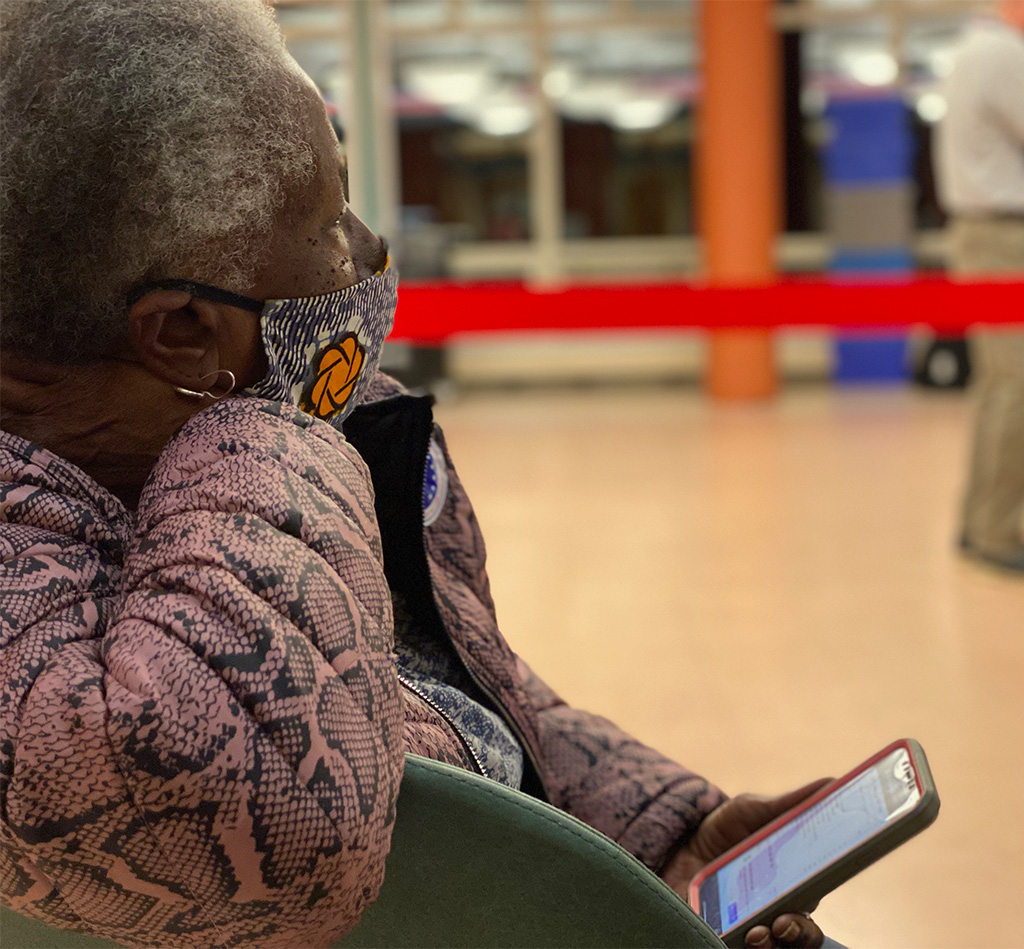 The presence of new members on each of Cambridge’s elected bodies was guaranteed this year. Tim Toomey announced in June that he would retire after a run of public service lasting more than 35 years; and committee vice chair Manikka Bowman, who has served since 2015, chose not to run for reelection in July, citing family needs.

A Toomey endorsement of Toner had a powerful effect; four years ago, when Toner first tried for a council seat, he came in ninth in No. 1 votes and failed to win a seat. This year, an analysis from a competing candidate showed Toner strong in East Cambridge – Toomey’s neighborhood and his power base – and he rose to 1,613 top-ranked votes from 980.

Safety precautions among the coronavirus pandemic made this a peculiar election: campaign forums moved online, followed by debate among voters, though some candidates opted out either in general or from specific forums hosted by groups with which they disagreed. Retail campaigning didn’t stop, and candidates from longtime councillor McGovern to first-time challenger Theodora Skeadas expressed exhaustion from the effort in recent conversations.

The pandemic also changed the nature of the vote count itself. Instead of candidates, staffers, media and the public crowding as usual into the Citywide Senior Center in Central Square, only three non-election staffers were allowed in at a time. Cambridge Community Television broadcast from its studio, rather than the senior center cafeteria. And paper results from precinct voting machines were posted at the front of the center so people could read them from the sidewalk, rather than inside to be read in a hallway.