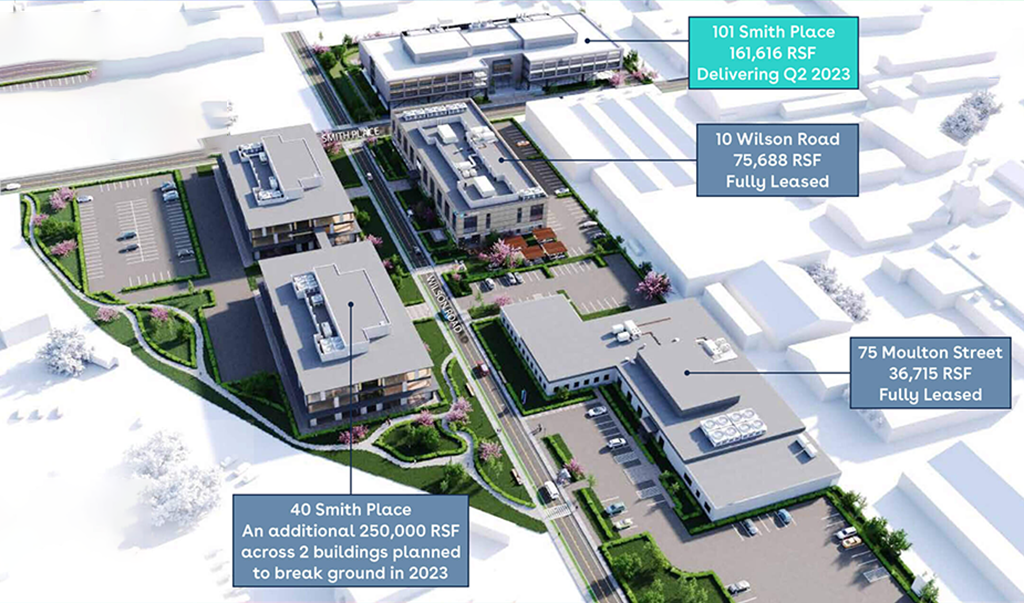 A rendering shows The Davis Cos. plan for The Quad, a 9.8-acre campus near Alewife. The image has been retouched to remove some branding. (Image: The Davis Cos.)

An order proposing a moratorium on office or lab space being added to the Alewife area was approved Monday by the City Council for hearings before the Ordinance Committee and Planning Board.

Before a tree-cutting moratorium went into place in 2019, the pace of felled trees seemed to accelerate; while it’s not so simple for multimillion-dollar construction, developers, councillors and Planning Board members are all trying to figure out how the order affects business as usual.

The moratorium would be until 2024 or “such time as new Alewife District zoning is ordained,” a reaction to the Denver company Healthpeak going on a $512 million spending spree in the Cambridge Highlands area by Alewife over the past five months.

Passing zoning, such as this moratorium, “normally takes about three months” but could be done within six weeks, said councillor Dennis Carlone, who was co-chair of the council’s Ordinance Committee for the past couple of terms. “We have never done that in six weeks.”

The typically monthslong process is worrying developers who are not with Healthpeak, which is still pulling together parcels for what it told investors would be 36 acres of life-science campus.

Chris Chandor, senior vice president of development for The Davis Cos., came to the council Nov. 15 to explain how its projects in the area comply with the goals of the “Envision” zoning that might be put in place and contribute toward a multiuse bike path, a longtime community goal. “If this development moratorium were to go through, that would stop that Envision goal dead in its tracks for at least two years. We implore the City Council to reconsider and not slow down our ability to deliver on on a number of the goals of Envision quite collaboratively with the city,” Chandor said.

On Monday, it was the turn of Joseph Sultan, who said his family had been building smaller projects in Cambridge since the 1980s. At the time, “there was tons of supply and no demand,” he said. “Now that there’s a ton of demand the council is going to collapse supply? That doesn’t make a ton of sense to us.”

“It’s just really hard to run a business when the City Council is changing existing law from month to month. It’s not fair to those of us who have been here in Cambridge for a long time,” Sultan said.

Sultan urged councillors to delay the moratorium for several months with a critique that “the policy order reads like Healthpeak wrote it” because the Denver company might need until 2024 to get its permits for the area in place anyway. The council should let smaller companies such as he represents “at least do our business and run our companies the way we’re supposed to,” he said.

“There’s a sense of desperation and panic in this policy order,” Sultan said.

Timing of a moratorium

The Planning Board, in hearing yet another proposal for the area last month from a Cabot, Cabot & Forbes affiliate, preceded the council in trying to figure out the moratorium’s effect on its work. It heard that when the moratorium is adopted, it becomes effective for any development that doesn’t already have a building permit or special permit.

The advice the board received from city staff: Don’t waste effort worrying.

“It’s actually been fairly common at the Planning Board to have these kinds of cases that overlap,” said Jeff Roberts, the city’s director of zoning and development. “It creates somewhat of a state of limbo, but usually our suggestion – and usually the way the Planning Board proceeds with these cases – is just to proceed,” since no outcome for the moratorium or any individual project is known.

The council went over the same ground Monday, but Carlone added confusion with an attempted clarification: “It’s [from] the first Ordinance Committee meeting date that it becomes valid, but only if it passes three months later. So if it doesn’t pass, that first date doesn’t mean anything,” Carlone said.

If Sultan was worried that the proposed zoning seemed to favor Healthpeak – despite being written in alarm over Healthpeak’s unstated plans – councillors took pains Monday to show that wasn’t the case.

Councillor Patty Nolan, who filed the policy order seeking a moratorium, said its timeline and effect on projects in the pipeline could be discussed in committee, as well as if it was “the will of the council that the moratorium only applies to certain kinds of projects” and whether there are certain “projects that should be going forward.”

As Carlone’s replacement on the Ordinance Committee this term, councillor Quinton Zondervan said he believed permits for Sultan’s project had already been filed and should have “enough time get approved, but we will certainly follow up with [inspectional services] and make sure.”