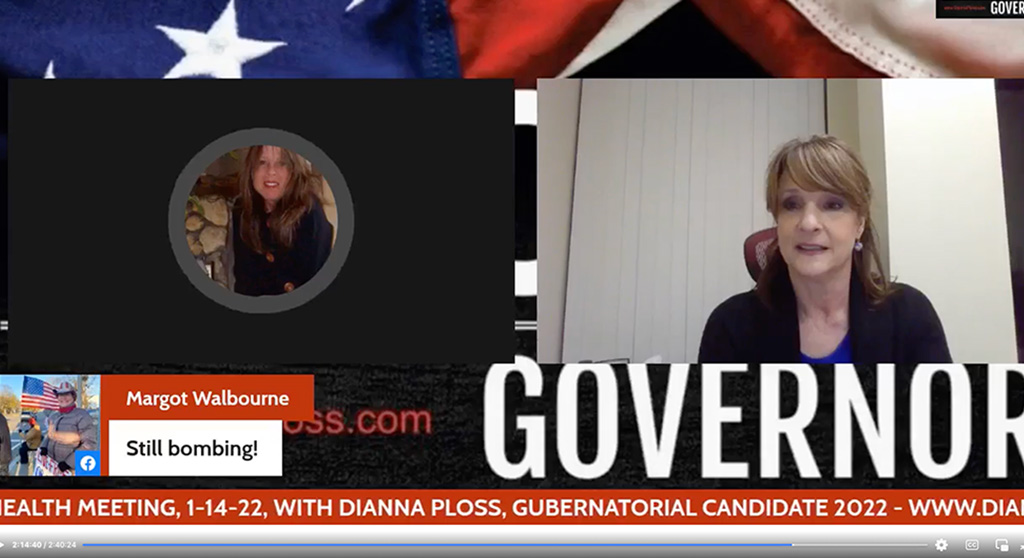 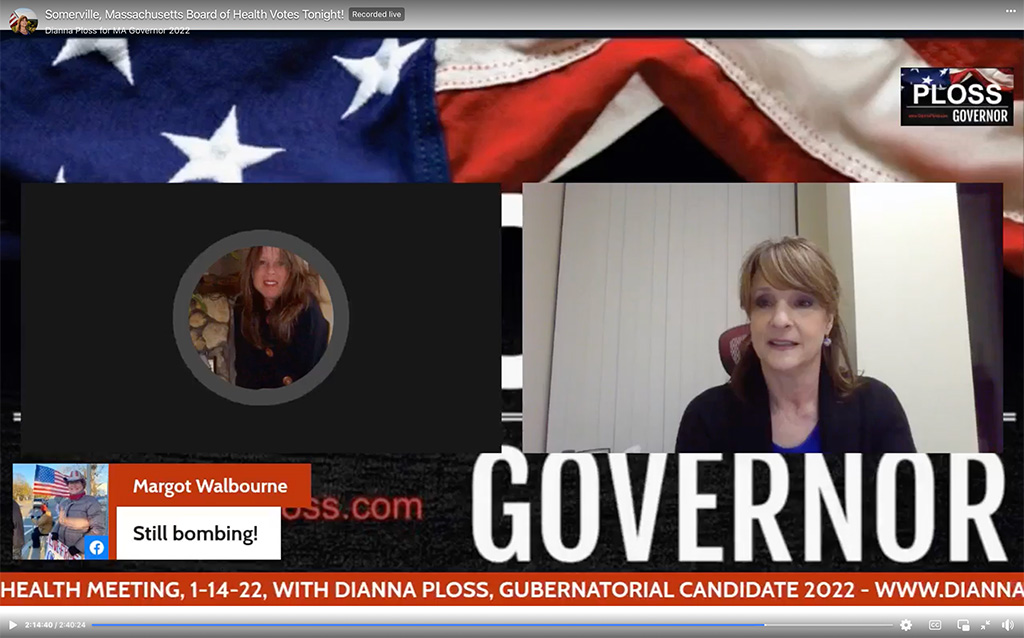 A screen capture from a livestream led by Dianna Ploss, of Peabody, of efforts to disrupt a Somerville Board of Health meeting.

Somerville’s Board of Health will try again Thursday to vote on a vaccine mandate for certain indoor businesses after a delay Friday caused by a group crashing its virtual meeting, unleashing heated barbs that officials called “aggressive” and “violent.” The vaccine mandate vote had already been postponed from December.

The barrage of agitated and angry words interrupting the proceedings was led by Dianna Ploss, a conservative Internet personality, former radio host and declared independent candidate for governor. Ploss lives in Peabody, some 20 miles north of the city whose meeting she was crashing.

Her campaign website said she “calls out all adversaries of Freedom: Communists, Islamists and Establishment Republicans,” according to The Daily Item, a newspaper based in Lynn. “Dianna is a staunch supporter of [former] President Trump and his America First agenda.”

Ploss rallied her followers to become public commenters Friday through a Facebook livestream, where an adviser urged, “get in and bomb them.”

“Get in there and yell”

While the meeting’s formal public comment period was civil, when the meeting turned to board discussion it was disrupted by protesters – despite attempts to mute them and eject some from the meeting. It was hard to tell who was from Somerville.

“Somebody get in there,” Lisa Johnson, Ploss’ campaign manager, exhorted watchers via her livestream Friday. “The link is at the bottom [of the screen]. It’s so easy. Bomb away. If you thought standing on a corner with a flag was fun, you will have no idea how much fun it is to get thrown out [of a meeting]. It’s as good as getting pizza thrown out the window at you, a finger tossed up at you. It’s better than all of that. Get in the meeting and bomb. Go do it.” Johnson is a resident of West Brookfield, around 69 miles from Somerville to the west.

“You have to keep your finger on the the button because they’ll mute you fast. Get in there and yell,” Johnson advised, expressing pleasure at having “started the ball rolling.”

Ploss was emailed for comment Sunday at her campaign site; she replied that she was open to an interview, but the email was lost in a junk mail filter until after publication.

Ploss alleged that board chair Brian Green was “trying to kill people. He deserves disrespect,” while others declared that there should be “lawsuits.” Director of Health and Human Services Doug Kress said Friday that viewing the comments in the chat box during the GoToMeeting event, he felt concerned by the turn things were taking.

Officials said they did not know what to expect of Thursday’s meeting.

“I’m a bit concerned by some of the comments that are popping up,” Kress said during the meeting. “They are aggressive. They are violent. We’re not moving forward in a productive way, and I think that that’s scary. And I do note that in many of the comments that are popping, it’s only a few people, a select few who are commenting in a negative manner. And that has me very concerned with the safety of my staff who are out doing this work on a daily basis. I worry about the safety of others who are in this community.”

The Somerville policy would require that proof of vaccination be shown at the door of spaces such as restaurants, gyms and entertainment venues because “vaccinated individuals are less likely to develop serious symptoms or spread Covid-19 to those near them, particularly in indoor settings where social distancing is not possible, where eating and drinking require the removal of face coverings, and where physical exercise and exertion are taking place.”

The mandate was partially inspired by Boston Mayor Michelle Wu’s “B Together Initiative,” Somerville officials said; other cities have imposed them as well. Cambridge’s city manager has resisted vaccine mandates for businesses and his own staff at City Hall, repeating his rejection Jan. 11 by saying “Cambridge is different than New York and Boston … we are prioritizing education and outreach over punitive enforcement.”

During the Friday meeting, several arguments were raised for why it should not be implemented in addition to protester’s assertions that they did not want the government deciding how to treat their bodies. Joe Carreiro of El Potro Mexican Bar & Grill, in Somerville’s Union Square, said it would be difficult for restaurants to enforce the mandate. Steve Mackey, president of the Somerville Chamber of Commerce, said small businesses will suffer as a result of its enactment.

“Establishments have estimated that it would cost them $1,000 a week to put somebody at the door to check,” Mackey said in an interview after the meeting.“Some of them are already doing it, voluntarily. This [is] a little more challenging, but I think they’ll be able to build it into their routine. Other businesses won’t. It’ll be too expensive … It’s another thing that might put the restaurants over the edge.”

Mackey mentioned that he is also concerned by the idea of minors going to establishments, such as pizzerias or ice cream shops, and being asked to reveal their identification; vaccination record cards show names and birthdates. He had been calling for a public hearing to be held so community members could have their concerns addressed directly – an initiative unlikely to move forward given the vote expected Thursday.

Green said during the meeting that he understands that the discussion about the vaccine mandate has created a rift in the community. There is no easy solution to this problem.

“I agree with you that this is divisive. We know from what the emails have been showing and what this kind of community level of concern on both sides [is like] that the division is already here,” Green said. “Whether we decide yes or no, the community is going to be divided, and people are going to be dissatisfied. People are pretty passionate on both sides.”

Somerville Licensing Commission chair Joe Lynch said during the Friday meeting that the Somerville mandate did not propose guidance or financial help for businesses Dec. 21, when the vote was originally expected; the board extended the decision-making given the complexity of the issue. The places that would be enforcing the policy are “among the [hardest] hit financially and will need an infusion of capital in order to effectively comply with this order,” Lynch said.

Nikki Spencer, chief of staff to Somerville Mayor Katjana Ballantyne, said that technical guidance will be released, and various departments will set up helpful webinars.

In her recently released 100-day agenda, Ballantyne explained that she prefers mandates because “the path to fighting Covid is focused on getting as many people as we can fully vaccinated and boosted.”

Ballantyne reiterated her support Monday in an email. “The vaccine requirement is important for helping to keep our businesses open and their staff and customers safe, so my hope is that it will pass, and if it does, the city is ready to assist businesses in rolling this out because we’ve got to fight this virus on all fronts,” Ballantyne said. “Together, we will get to the other side of this.”

This story was updated Jan. 25, 2021, to correct that Dianna Ploss did respond to an email, but the reply wasn’t seen until after publication.