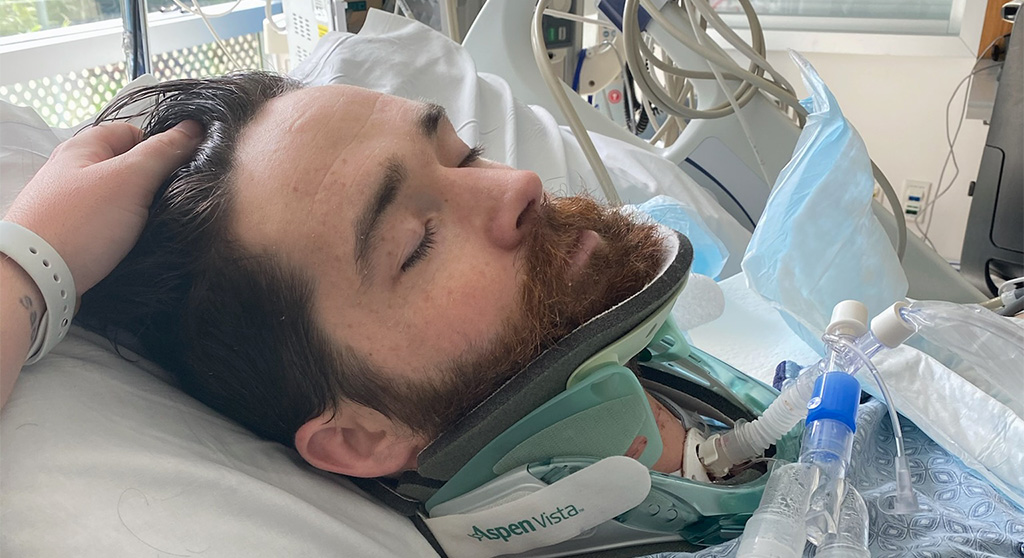 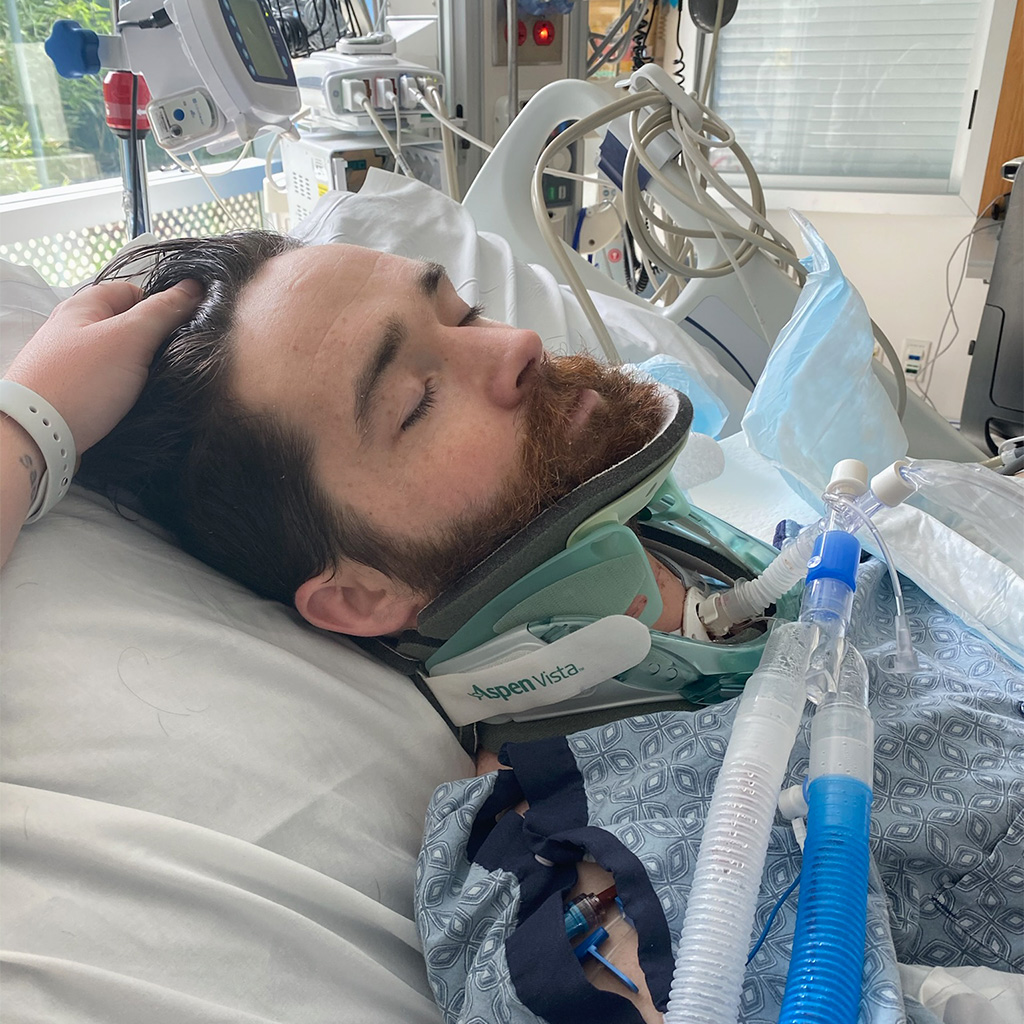 William Good, during his recovery from an April 30 crash in Somerville. (Photo: Victoria Santoro Mair)

A Somerville man filed a $63 million lawsuit Tuesday against Uber over a crash that left him permanently paralyzed, saying the driver of the car had had a history of reckless driving but still managed to pass the ride-share company’s screening process. His lawyer, Victoria Santoro Mair, called that “inexplicable.”

“I struggle daily with the knowledge that this Uber employee was hired as a professional driver – the last thing he should have been hired to do,” said William Good, 31, in a press release. “But most of all, I struggle to understand how a company that is so sophisticated has been completely unable to ensure the safety of its drivers on the roads. I remain focused on accountability for what has happened to me and on preventing this from happening to another person.”

According to Mair, the driver had had a record of 20 moving violations, various crashes and state-ordered driver retraining. Uber let him drive “aware he was a danger to the public,” she said in a press release. “Uber’s business practices, incentivizing speed over safety and profits over people, have endangered all Massachusetts residents.” She did not know of similar cases going to court in the state.

The crash that left Good a quadriplegic happened April 30. 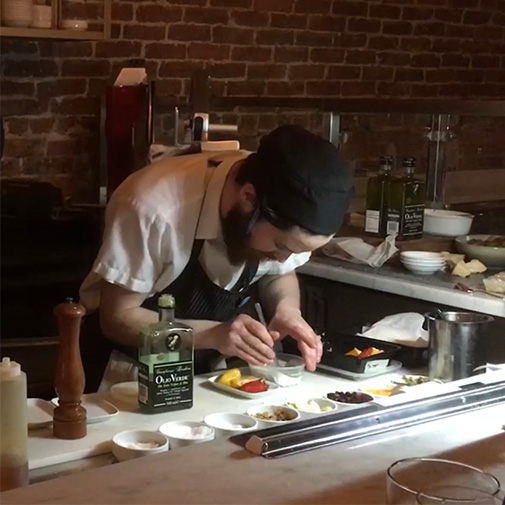 William Good at Uni in Boston, where he worked as a chef. (Photo: Victoria Santoro Mair)

Good had called an Uber, as he routinely did, after working a long shift at Uni, a Japanese restaurant in Boston. He felt the driver – identified in the lawsuit as Jonas Yohou – was going somewhat fast, but tried to relax and look at his phone, Mair said in an interview. The driver told Good that he was happy to drive into Somerville because he could “fly around on those streets.” The collision occurred at 12:57 a.m. at 251 Highland Ave., by the Beautique On The Ave hair salon between the former Somerville Hospital and a fire station. He was just blocks away from home.

“My client, Mr. Good, felt a swerve. He heard an expletive, and then heard metal on metal,” Mair said. The Uber had been driven into a parked vehicle, throwing Good into a headrest and breakin his neck. “The crash occurred, and Mr. Good slumped over. His eyes went to his hand, which was above his head, and he couldn’t move it. So he had this sudden realization that he thought he was paralyzed. He knew.”

The driver tried to move him repeatedly, despite Good’s protests, but eventually called 911, Mair said. When first responders arrived, they had to use their extraction tools to get Good out.

The sound of the crash haunts Good, he told WCVB-TV, a sound “I still hear multiple times every day, metal on metal and crashing glass.” 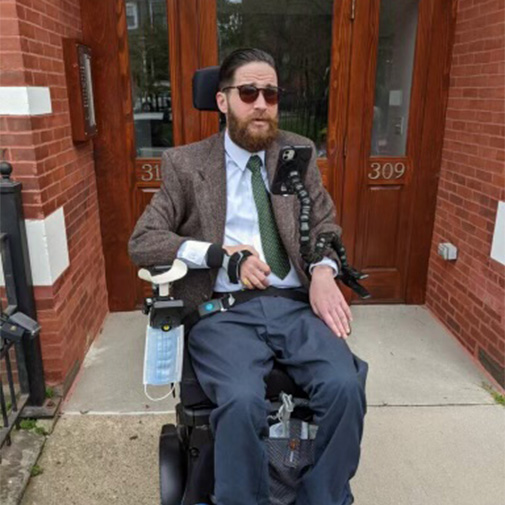 William Good was left permanently a quadriplegic in the April 30 car crash, according to a lawsuit he filed. (Photo: Victoria Santoro Mair)

A spokesperson for Uber, Austen Radcliff, said the company was unable to comment on Good’s claims due to pending litigation. She did describe the company’s background check process, explaining that in Massachusetts, potential drivers go through a two-part screening. Uber checks for motor vehicle records and criminal offenses at the local, state and federal level, then does a state-managed background check, Radcliff said. At least every six months, drivers are re-screened.

Mair called the incident “a tragedy. But over and above that, it is a preventable tragedy.” Her client, Good, would like to see Uber take “some accountability, for Uber to do better, operate more safely and keep people safe.”

The lawsuit says Uber “negligently incentivizes its driver to never miss a fare under threat of being fired,” which encourages unsafe driving and speeding.

The topic of whether drivers are independent contractors or employees is a related issue. “Uber is now pouring a lot of effort and money – millions of dollars – into the state of Massachusetts to do a similar thing to what they did in California, which is introduce a ballot measure … about whether or not workers hired by Uber, employed by Uber and paid by Uber are actually employees of Uber,” Mair said. “It is our position that they are.”