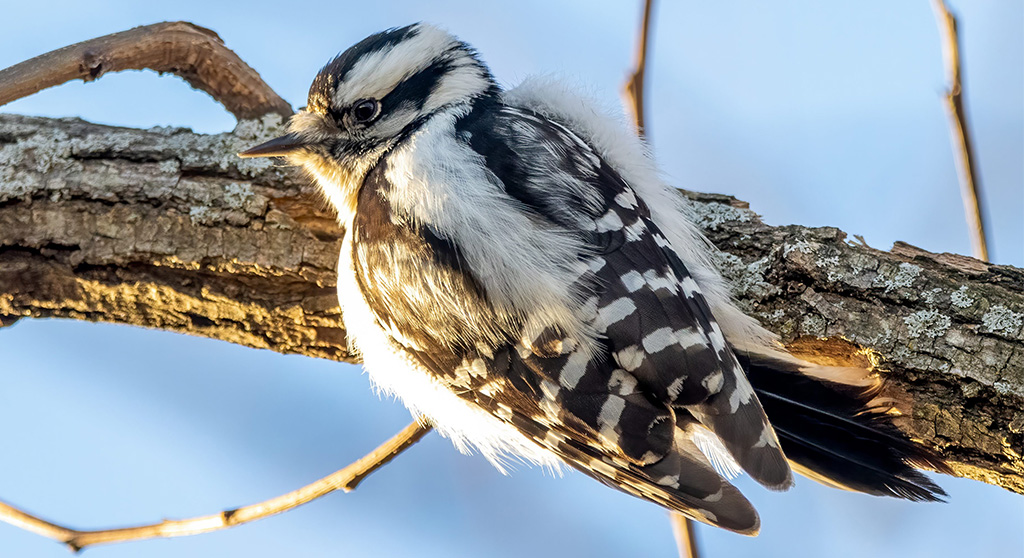 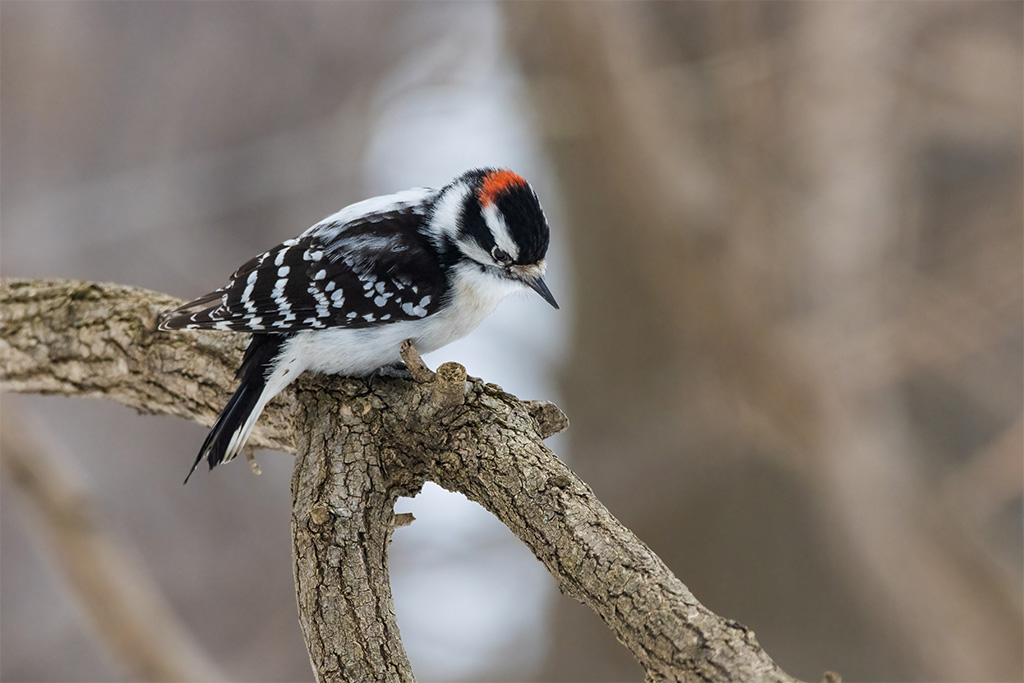 The downy woodpecker is the smallest but most common woodpecker in North America. (Photo: Richard George)

The downy woodpecker (Picoides pubescens) is the smallest but also the most common woodpecker in North America. Although it is about 6 inches long, it weighs less than an ounce. No other surpasses a downy woodpecker in “hardiness, industry, or vivacity. If you watch its motions … you will find it ever at work,” John James Audubon said in 1834.

Male downies have a red dot on the back of the head; the females do not. Downies have a short bill with a pointy tip. These fleet birds blend in well with their surroundings and move about swiftly in trees (which makes them a bit of a challenge to photograph). Unlike most birds, which have three toes forward and one behind, woodpeckers have two forward and two behind. 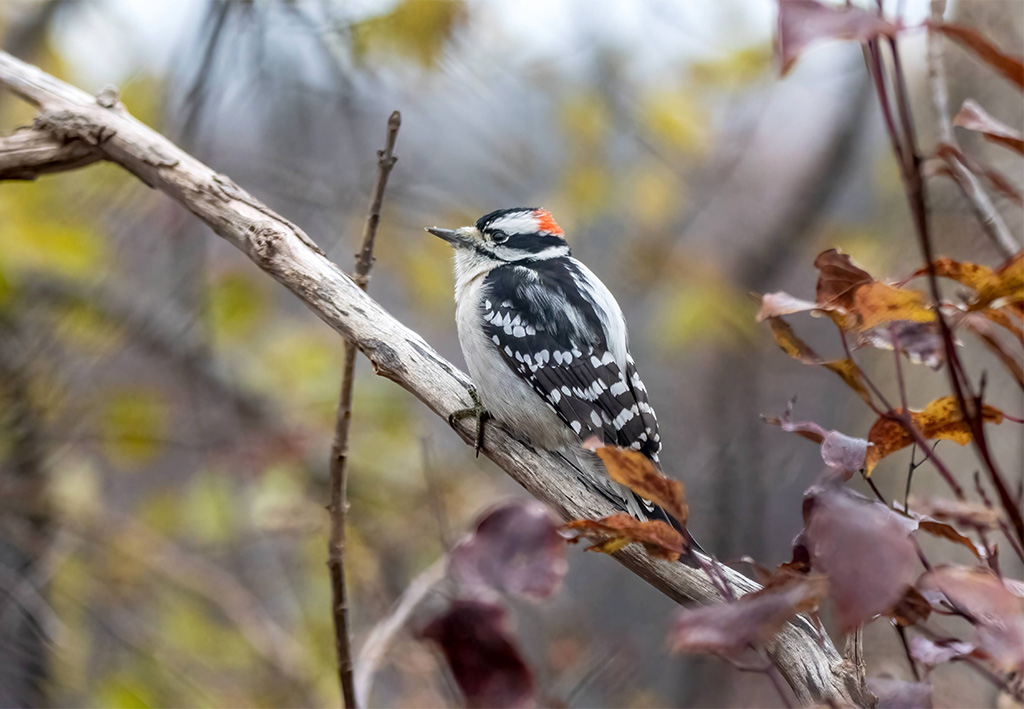 This male downy woodpecker in Strawberry Hill, like all males, has a red dot on the back of the head. (Photo: Richard George)

These birds peck at trees searching for insects as they hop up and down tree trunks using their stiff tail feathers to prop themselves up. They also visit suet feeders and bird feeders that contain sunflower seeds or peanuts. According to Audubon, again writing in 1834, “Their food, during summer, consists of insects and their larvae; but, at the approach of autumn, they feed on fruits of various kinds, especially small grapes, and the berries of the poke-weed.”

Many people think pokeweed, which can quickly grow to 10 feet,  has no redeeming qualities and is nothing but a dangerous and highly poisonous weed, but people have been eating it for hundreds of years and have found it useful in many ways.

It’s long been eaten in the American South, since it is one of the first green plants to appear in the spring. All parts of the pokeweed (leaves, stem, roots and berries) are poisonous to humans and other mammals, though – even deadly – and pokeweed poisoning, common during the 1800s, still occurs on occasion today. To cook pokeweed, people boiled the young greens (several times) and ate them as poke sallet, inspiring the song “Poke Salad Annie.” 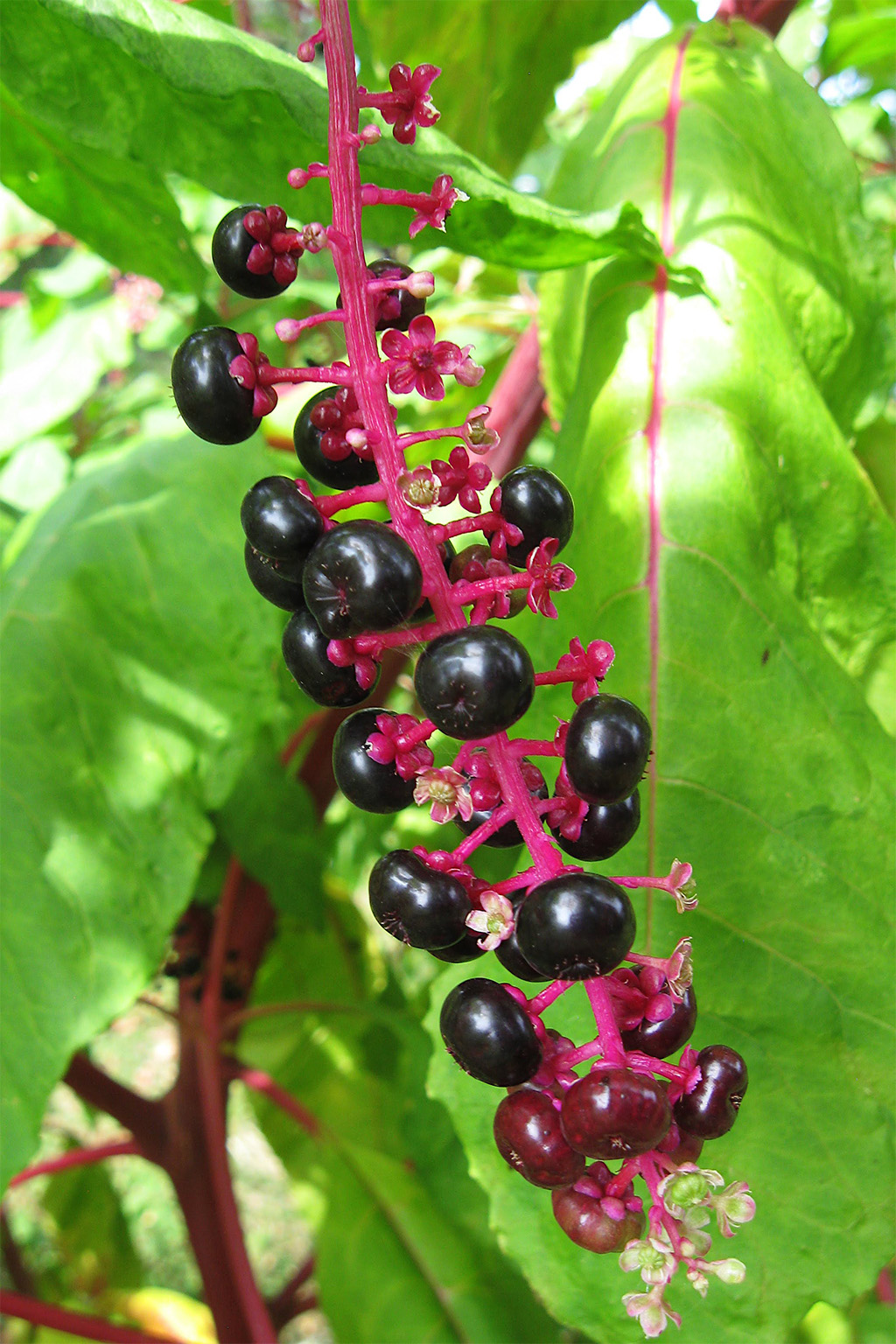 Pokeweed is sometimes said to be effective as a dewormer or to induce vomiting, though its medicinal qualities have not been studied scientifically.

In her memoir, Dolly Parton wrote about using crushed pokeweed berries to make lipstick when her parents would not let her use makeup.

Back to downy woodpeckers 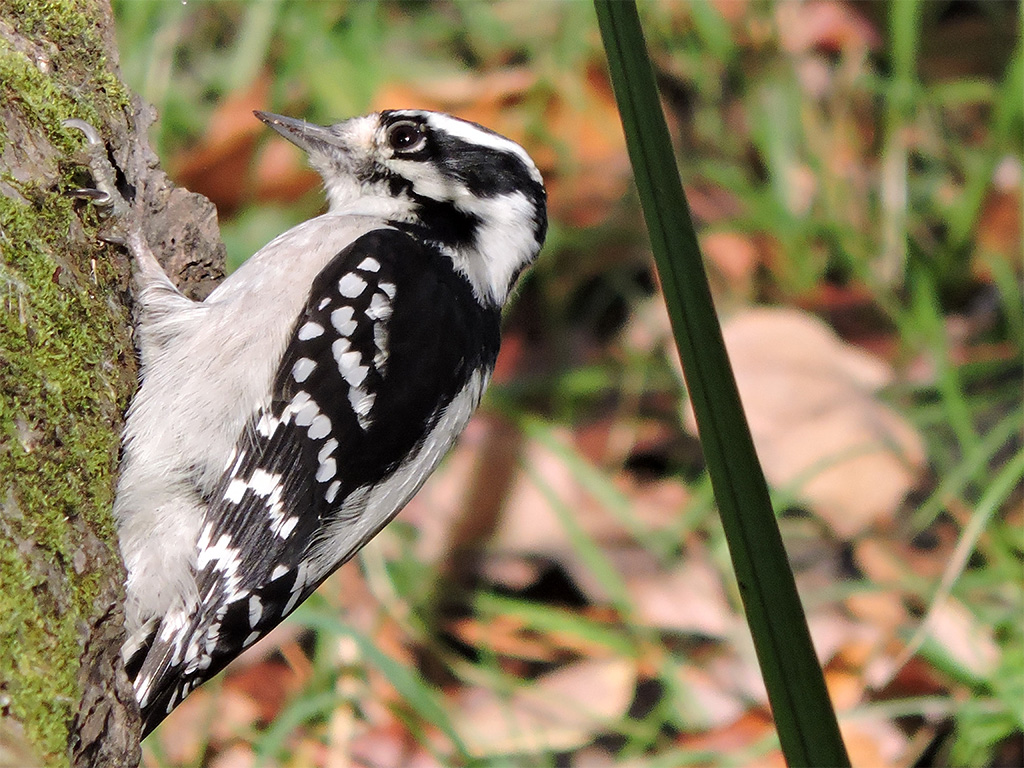 Downy woodpeckers live in woodlands and in both urban and suburban areas. (Photo: Ann Schlesinger)

Because downy woodpeckers are not picky about the type or age of the trees they use, these birds are widespread. The woodpeckers’ exceptionally long, barbed tongue – several times longer than their bills, in fact – help them reach into narrow openings to rake out ants or other insects. The sticky saliva ensures that the insects will not escape.

Woodpeckers are very good at pecking wood – their beaks strike with at least 1,000 times the force of gravity without causing injury. There are several reasons woodpeckers do not harm their brains during all this hammering. 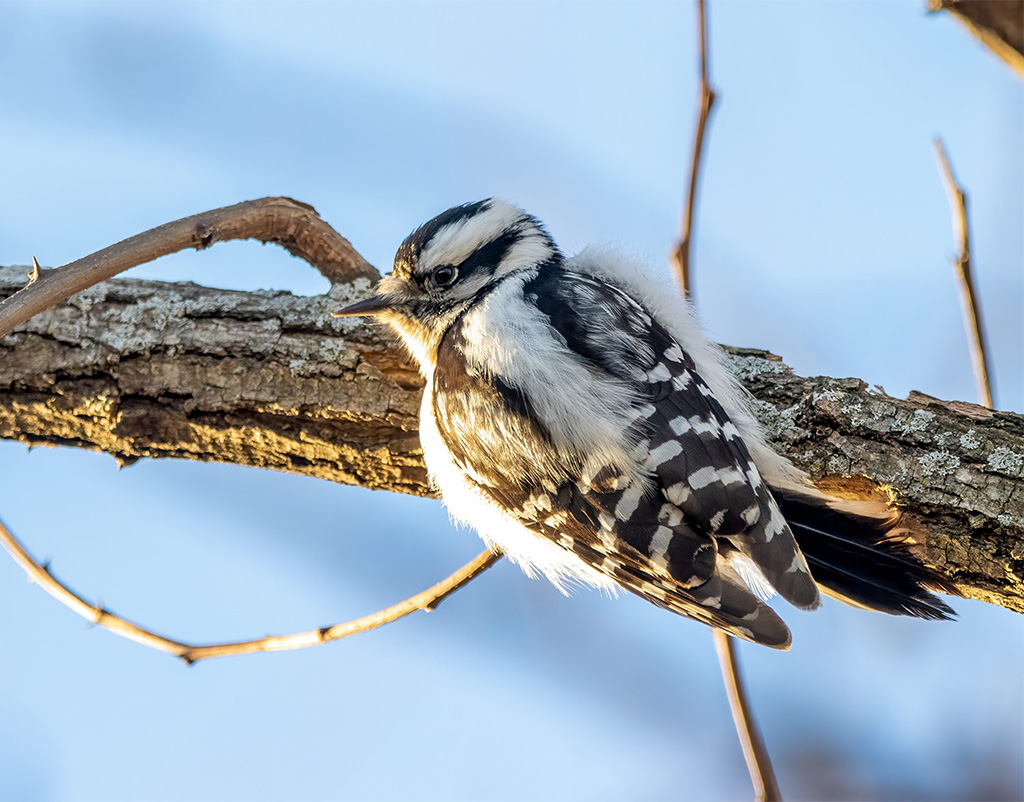 This downy woodpecker in North Cambridge has black tail feathers and a black-and-white pattern on its wings and back. (Photo: Richard George)

This concept was elucidated in 1928 by the British scientist J.B.S. Haldane in his essay “On Being the Right Size.”

To the mouse and any smaller animal [gravity] presents practically no dangers. You can drop a mouse down a thousand-yard mine shaft; and, on arriving at the bottom, it gets a slight shock and walks away, provided that the ground is fairly soft. A rat is killed, a man is broken, a horse splashes … Divide an animal’s length, breadth and height each by ten; its weight is reduced to a thousandth, but its surface only to a hundredth. So the resistance to falling in the case of the small animal is relatively 10 times greater than the driving force. An insect, therefore, is not afraid of gravity; it can fall without danger.

Of course, we are not talking about falling, we are talking about drumming the head against a tree trunk, but the concept is similar. Woodpeckers have a small ratio of brain weight to brain surface area. The impact force is spread out over a relatively large area. In fact, a woodpecker’s brain is just 0.07 ounces, about the same weight as a cashew nut (without the shell). A human brain is more than 3 pounds (48 ounces), about the same weight as a cantaloupe. For more about why woodpeckers do not harm their brains, watch this video. 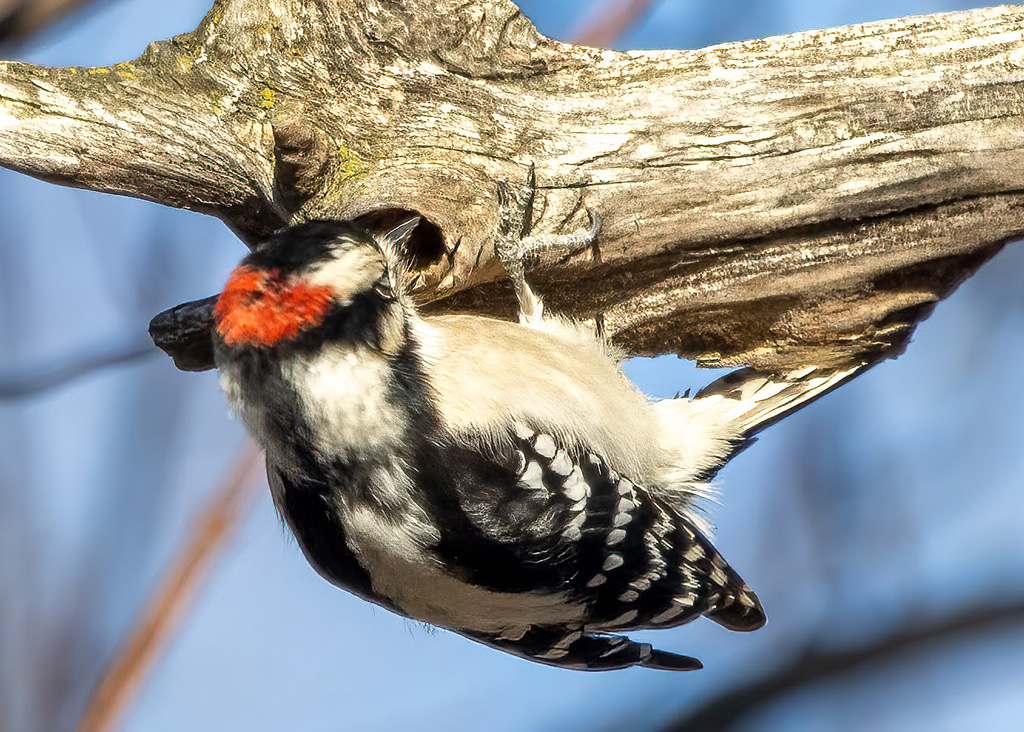 A downy woodpecker’s eyes are large in relation to its brain. As retinal bleeding is one of the horrid features of shaken baby syndrome, how do woodpeckers not harm their eyes from all their pounding? Well, in the first place, a bird’s retinas do not have blood vessels like human retinas. Instead, oxygen and nutrients diffuse to the retinal cells from a comblike structure that protrudes into the eyeball from the optic nerve. In addition, a woodpecker’s eyes – like its brain – are packed tightly into each socket, which minimizes movement within the socket. Finally, woodpeckers close a translucent membrane on their eyes before each strike. This third eyelid acts like a kind of seat belt that holds the eye tightly in place during deceleration. 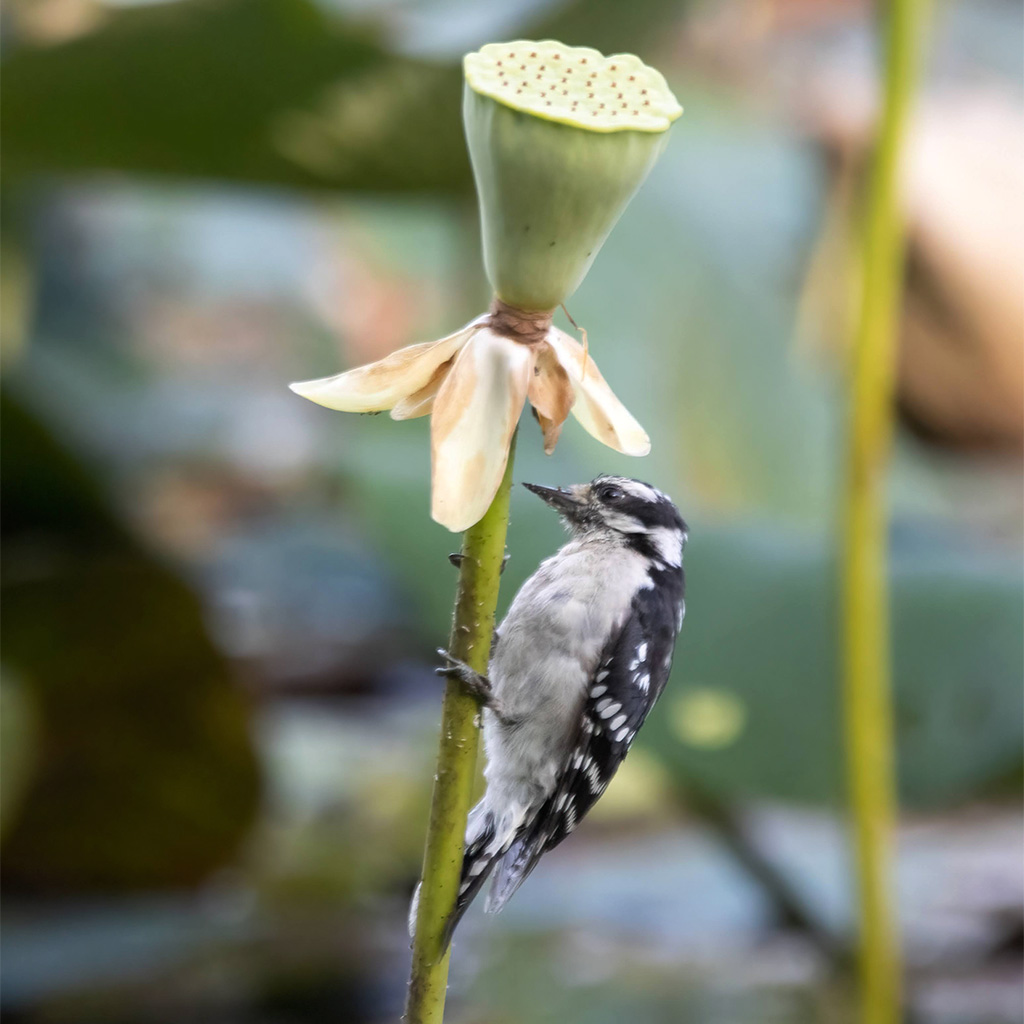 Downy woodpeckers have two toes forward and two behind. They use their tail feathers to prop themselves up. (Photo: Richard George)

Why do downy woodpeckers drum, anyway? You may have noticed that you hear them do it more commonly in the spring. It’s to stake out their territory and – unlike many other birds that sing for this purpose – to attract a mate. Woodpeckers also drum when they excavate a nest cavity or look for insects to eat.

About the middle of May the pair begin to look out for a suitable deposit for their eggs and young. The entrance is in the form of a perfect circle, and only just left large enough for an individual to pass in and out. Both sexes labor for about a week at this task with indefatigable diligence … to prevent suspicion they carry out the chips, and strew them at a distance. The eggs are about 6 white, and deposited on the smooth bottom of the cavity. The male occasionally feeds his mate, while sitting; and about the close of June the young are observed abroad, climbing up the tree with considerable address.

When evening arrives, downy woodpeckers roost in tree cavities, often ones they have dug out themselves. These cavities are only slightly larger than the width of the bird.