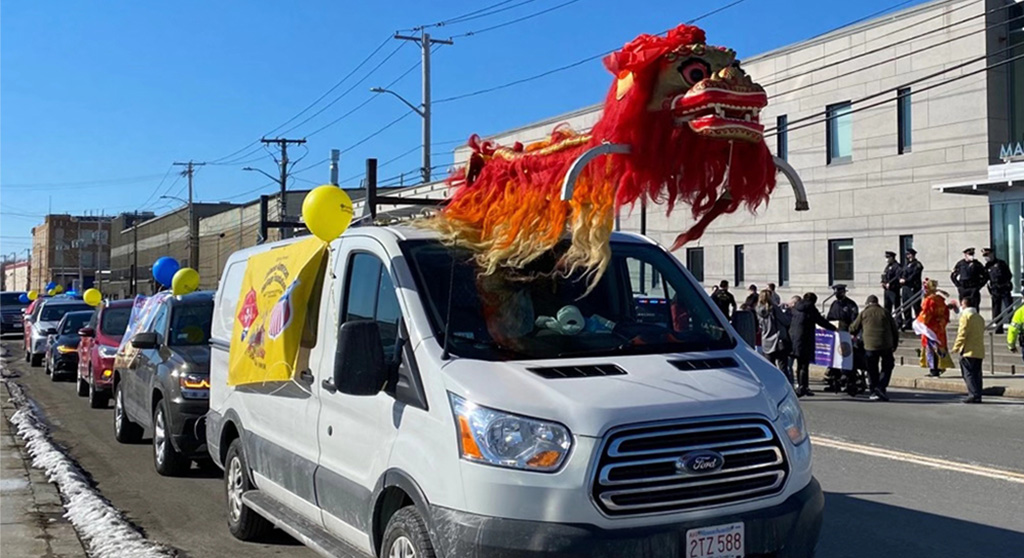 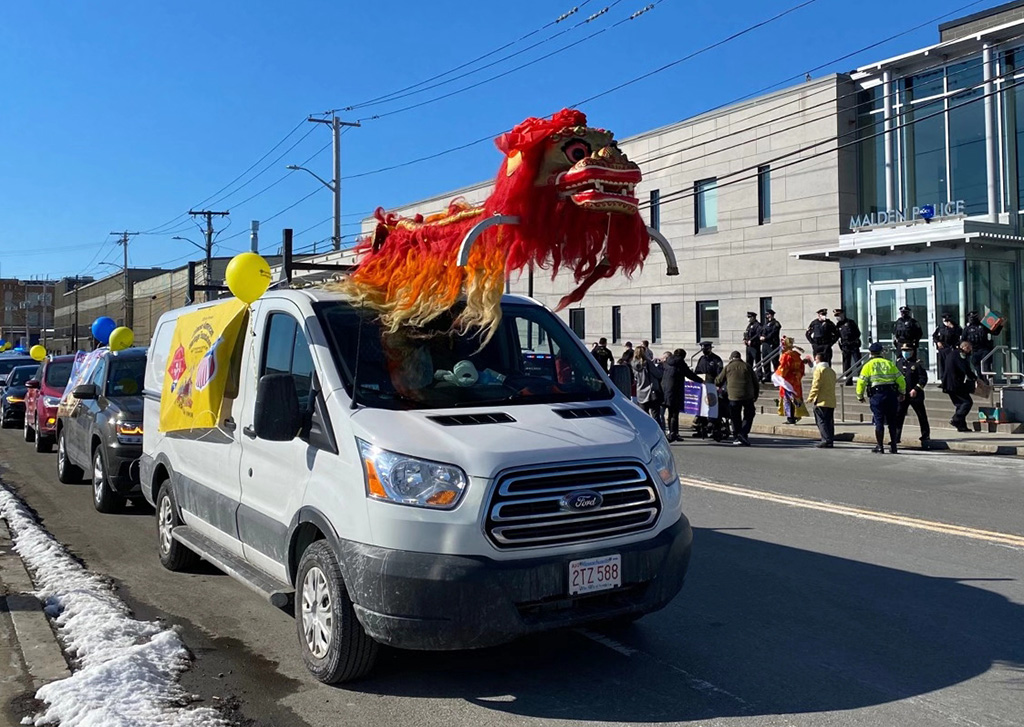 Though the Lunar New Year began Feb. 1, its celebration comes Sunday to Cambridge with a small Harvard Square street fair and a car parade from Boston that will stop at City Hall. Both are free, public events.

Instead, Sunday’s celebration is led by the Chinese American Association of Cambridge, which formed during the pandemic to organize against a surge of anti-Asian hate crime, and partners the Chinese American Heritage Foundation and the Chinese American Citizens Alliance Boston. The events are “to help the community better understand Asian culture, not just Chinese culture,” said Zhiqiang Fang, president of the the local group.

“This is not just a Chinese New Year celebration. We purposely use the term Lunar New Year because other Asian countries celebrate Lunar New Year – Vietnam, Malaysia, Korea and others,” said Wilson Lee, another event organizer. The holiday is celebrated by more 1.5 billion people under various names.

The Harvard Square street festival will include a lion dance, singing, dancing and demonstrations of kung fu, brush calligraphy and traditional Chinese painting, Fang said, followed by the lion dance team giving blessings to some businesses. He called the festivities a continuation of the group’s work to “spread an appreciation of Asian culture to the community,” which has included donating money, books and ceremonial red lanterns to schools such as the Peabody and MLK, he said.

Immediately before the street festival comes the 2nd Annual Greater Boston Chinese/Lunar New Year Rolling Car Parade – an innovation from 2021, when the Lunar New Year lion dance that takes in Chinatown was canceled.

“Everyone was depressed, because we were in the middle of the pandemic. We couldn’t go out. We wanted to celebrate in a festive way, but also be safe,” said Wilson Lee, a car parade organizer who’s been involved in community service in the Chinese-American community for almost 50 years, including as chair of the August Moon Festival and president of the Chinese Consolidated Benevolent Association, manager of Chinatown’s new year’s lion dance. “We got a lot of positive feedback, and some of the communities that we didn’t have a chance to go to asked us, ’Are you guys going to do this next year? Can you make this a tradition?’”

Sunday’s parade starts at 1 p.m. from the Chinatown Gate in Boston and goes through a dozen Greater Boston communities – five more than last year – including Cambridge, Somerville and Arlington as well as Belmont, Winchester, Lexington, Malden, Waltham, Newton, Brookline, Dorchester and Quincy. (There is a March 6 rain or snow date.) It’s expected to arrive at Cambridge City Hall at around 1:30 to 1:45 p.m. and be greeted by Mayor Sumbul Siddiqui. A table will be set up to give out fortune cookies, lucky candies and oranges to spread the holiday spirit, and there will be a lion dance performance, organizers said.

Lauren Yang, Miss Chinatown USA as of 2020 – a senior at Harvard whose reign was extended by the 2021 pageant being canceled – is expected to participate, but the parade marshal is Enoch “Woody” Woodhouse II, a Hudson resident who is a Congressional Gold Medal recipient as one of the surviving Tuskegee Airmen of World War II, Lee said.

“Feb. 1 was the official start of our lunar new year. It’s also the start of Black History Month,” Lee said. “You see all this Asian hate and hear how Asians are not part of the American mainstream. What better way to show our patriotism and our love for this country?” (The parade marshal last year was Seaman 1st Class Tony Moy, another World War II veteran and Congressional Gold Medal recipient.)

The route Woodhouse, Guo and the rest of the parade travels is no accident, Lee said, but imbued with just as much symbolism.

Early Chinese immigrants settled in Chinatown because of immigration restrictions such as the Chinese Exclusion Act of 1882 and Alien Land Laws, which prevented them from owning property. The laws were repealed in 1943 when China became a war ally, and that allowed an expansion of Asian-Americans to the suburbs. “If you look at the parade route, this is kind of like a history of our community, expanding outward. That’s why we go from Chinatown to Malden to the western suburbs and then Quincy,” Lee said. “We hope to grow it each year.”

As the car parade moves on from Cambridge City Hall, the Harvard Square celebration on Brattle Plaza is expected to get going at around 2 p.m., Fang said.

The Harvard Square Business Association highlighted various other ways to celebrate the Lunar New Year, including highlighting area Asian restaurants to eat at. The newest, Wusong Road, features a roasted duck that must be ordered a day in advance and is limited to 50 a week.

The association’s website quoted Paul Lee, of the Hong Kong Restaurant, as saying he hoped to bring back the restaurant’s Chinese New Year festivities in 2023 – though Fang said his own conversations with Paul Lee raised the possibility that the Hong Kong could yet celebrate this year.

This post was updated Feb. 25, 2022, with news of the participation of Lauren Yang.