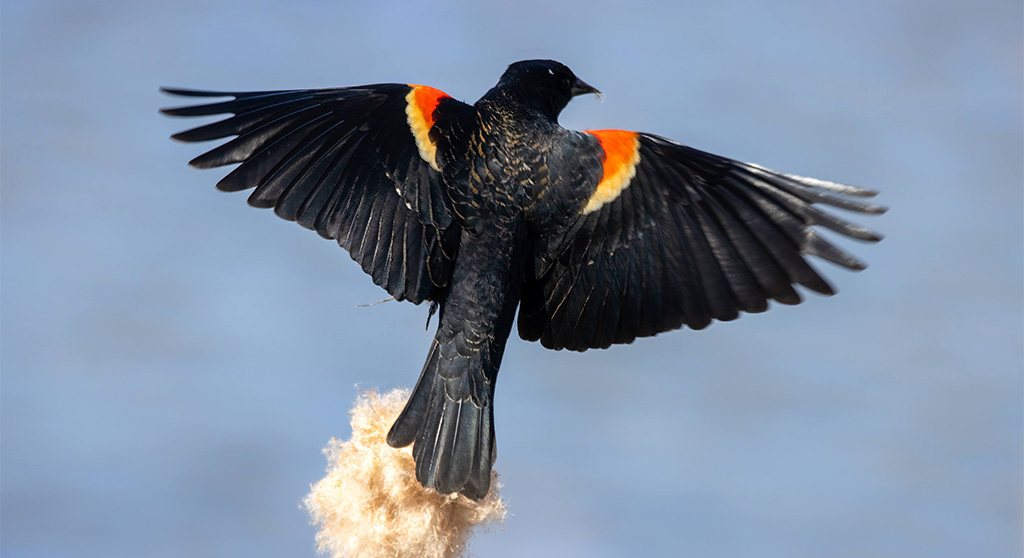 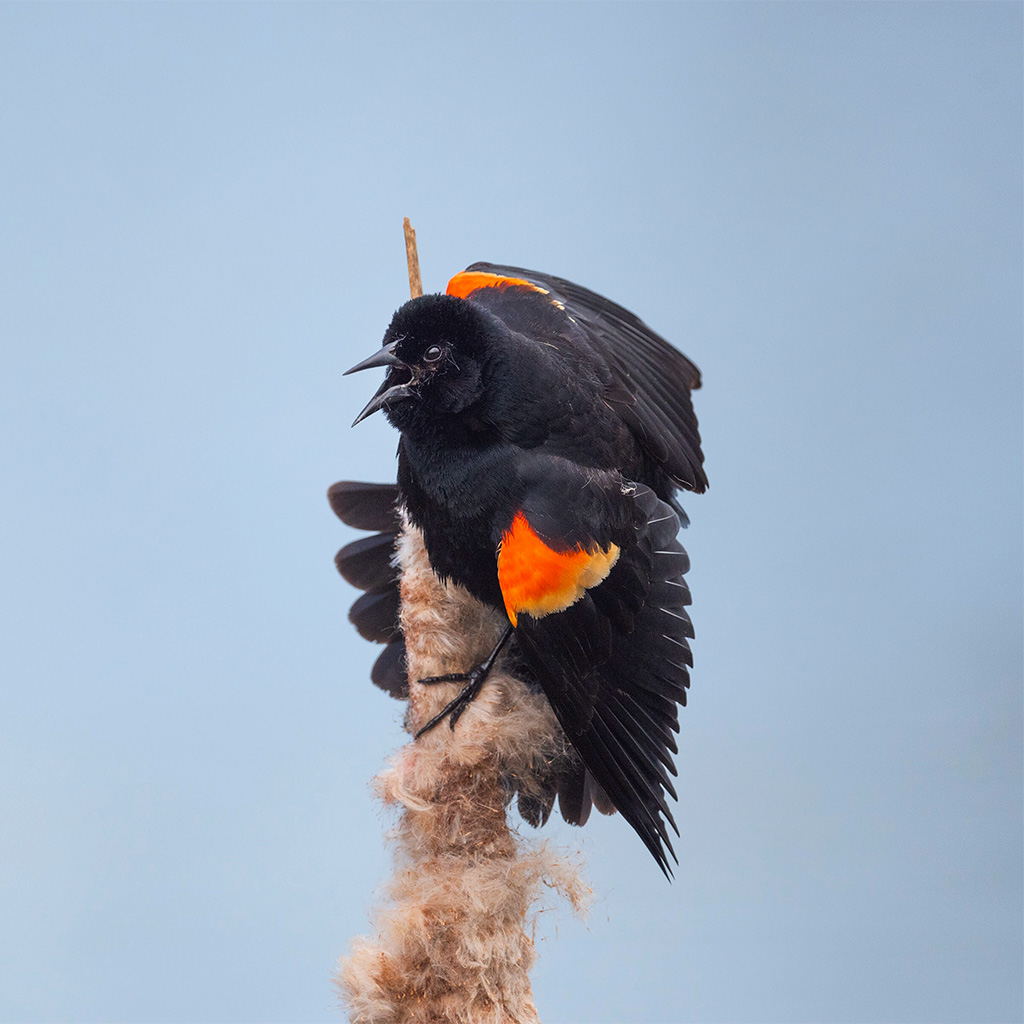 A red-winged blackbird at Fresh Pond shrieks from atop a cattail. Males are all black with a red shoulder and yellow wing bar. (Photo: Kim Starbucks, Fresh Pond Feathers)

Blackbirds are one of the most common birds in North America, and red-winged blackbirds (Agelaius phoeniceus) are perhaps the most distinctive. They are omnivores, eating insects, fruit, corn and farmer’s grain, among other things, so it is not too surprising that they have acquired enemies. In 1865, Henry David Thoreau wrote:

“In 1667 the town [of Eastham] voted that every housekeeper should kill twelve blackbirds or three crows, which did great damage to the corn; and this vote was repeated for many years.” In 1695 an additional order was passed … that “every unmarried man in the township shall kill six blackbirds, or three crows, while he remains single.”

Thoreau goes on to write that single men in Eastham would not be allowed to marry until they had fulfilled this order. Needless to say, this law did not have much effect on the blackbird population, as there likely were many more birds in the region than there were single men or housekeepers in Eastham. 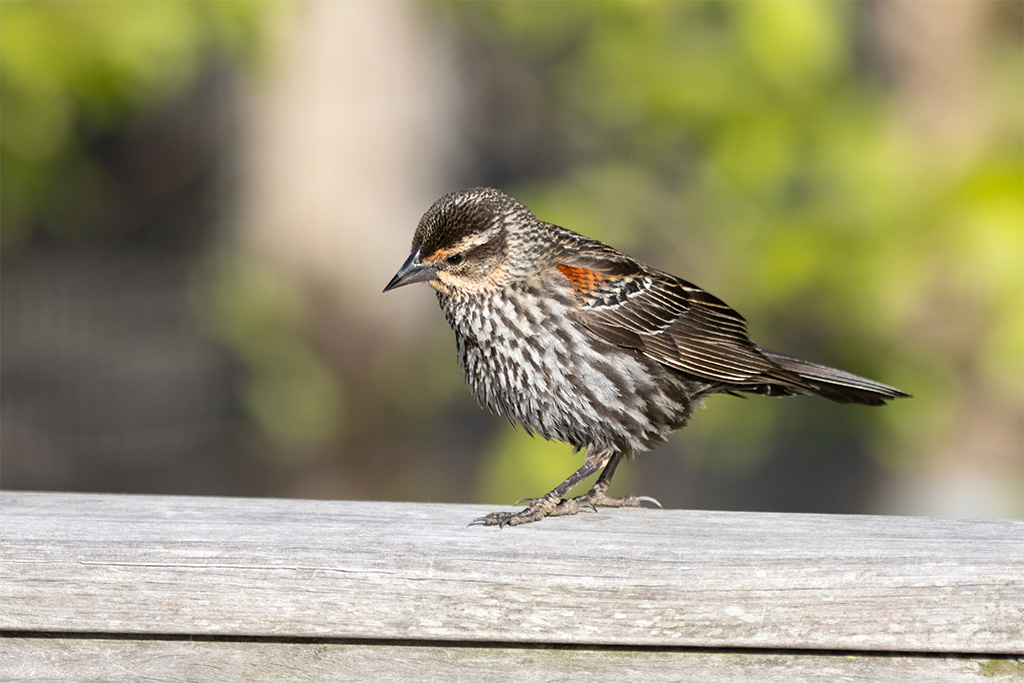 The female blackbird is dark brown and white with lighter patches on the head and wings. Both sexes have sharply pointed bills. (Photo: Richard George)

Ornithologist Arthur Cleveland Bent wrote in 1958 that more red-winged blackbirds “have been killed by man than by any other one agency, for when they swoop down in clouds on the corn fields … they have been slaughtered in multitudes to protect the crops.” One method of killing these birds was to set fire to the reeds in which they roosted. Once enveloped in flames, “the uproar among the Blackbirds becomes universal; and, by the light of the conflagration, they are shot down in vast numbers, while hovering and screaming over the place.” Hunters then sold the massacred birds in markets.

Red-winged blackbirds are so named because the males are black with red shoulder patches that are bordered underneath by a yellow line. The females are smaller and brownish, resembling large sparrows, but with orangish faces. During breeding season, the territorial males perch up high, ready to mob any intruder, no matter the size; the females lay low, inconspicuously building nests, laying eggs and feeding the young. 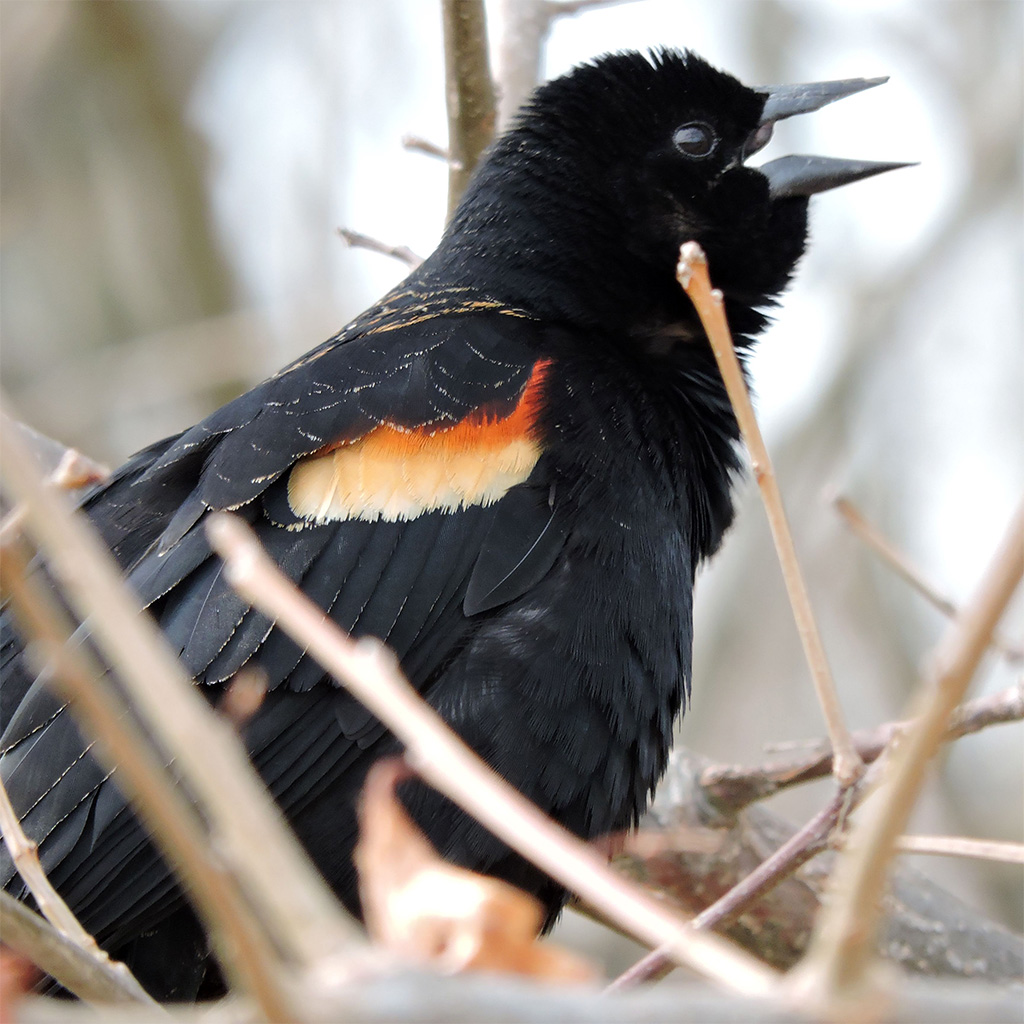 Bent writes about a photographer friend who encountered a sentry blackbird that “would hover directly over my head, where I could not see him, and from that advantageous position would strike the top of my head, pecking so hard through a thin summer cap that the blows were quite stinging. After he had struck repeatedly, I hoisted a bamboo staff that I was carrying, directly under him, thus forcing him upward; but he alighted on top of the staff and sat there, temporarily, looking down at me. Three days later, when I had stooped over, near his nest, he struck me on the back and on the arm, and even alighted for an instant on my back.”

I, too, was once besieged by a red-winged blackbird: Walking one spring in Sylvester Baxter Park, I heard a loud shriek behind me as a red-winged blackbird dive bombed my head. My pulse intensified and I quickened my step to get out of the way. The bird did not actually touch my head, but the shriek was so startling that I had no desire to look around or dilly-dally until I was well out of the way. 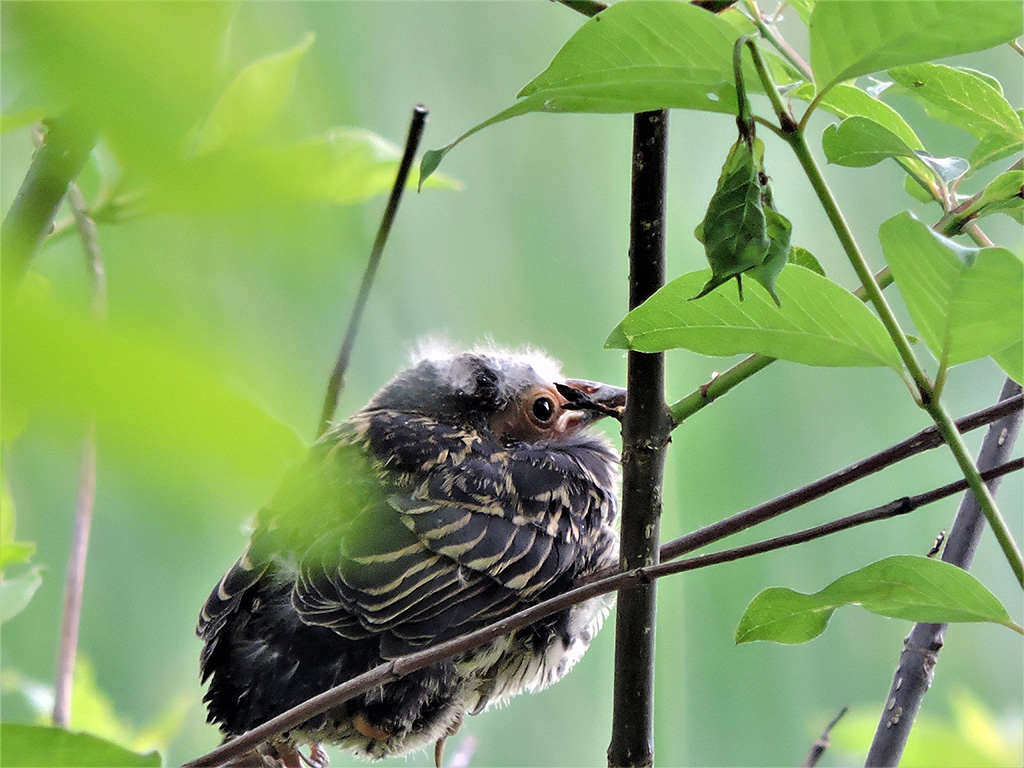 A fledgling red-winged blackbird. Juvenile plumage is similar to that of the female. (Photo: Ann Schlesinger)

Red-winged blackbirds are marsh birds. In good conditions, many birds nest closely together. In fact, the males mate with and share territory with up to 15 females. Because of this, egg clutches can have mixed paternity. Breeding season begins in February and runs through August, peaking in the warm weather of May, June and July. Red-winged blackbirds nest close to the ground, where predation is easy. This is probably why the females are camouflaged so well and the males are so vigilant in chasing away intruders. Some say breeding red-winged blackbirds makes a conk-la-reee sound. Their call does not sound like this to me, but it is a distinctive if indescribable sound. 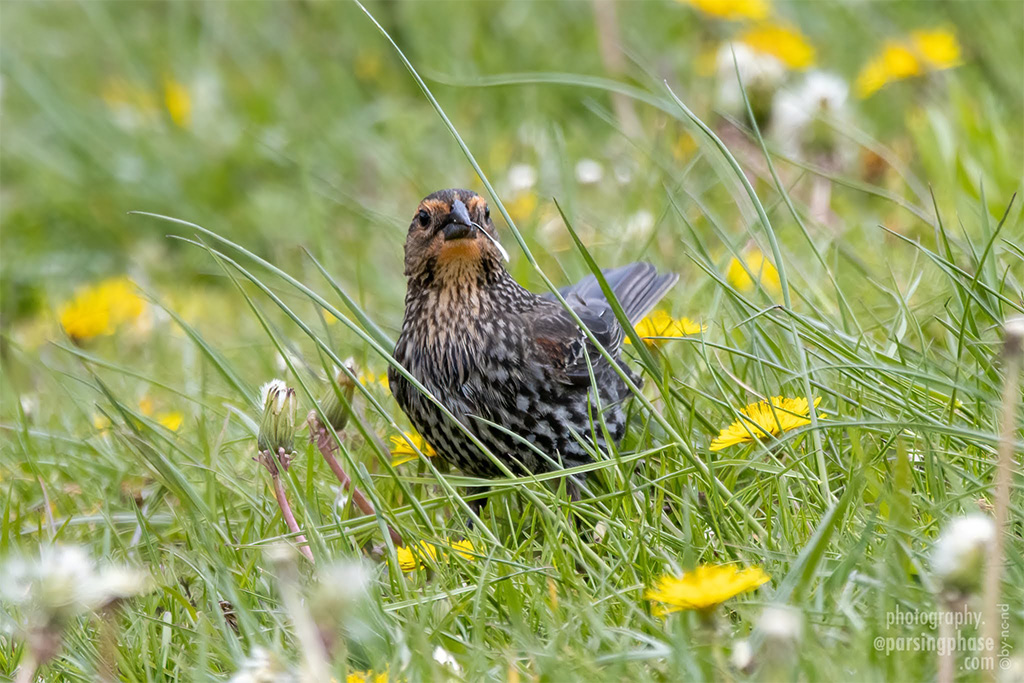 Studies have confirmed that fledgling success rates were significantly higher for females that mated not just with their partner but with males in adjacent territories. These fledglings starved less frequently and were preyed upon less. The higher survival rate most likely occurs because after mating the neighboring male allows the female to feed in his territory, and is more aggressive toward predators of the female he has mated with.

Most red-winged blackbirds do not stay through our Massachusetts winters, but a few may stay if the winter is mild. These birds breed in wetlands, but in the fall they forage on farmlands before migrating south in September or October. Because of this, the birds have been a bane to farmers for as long as there have been farmers in North America. 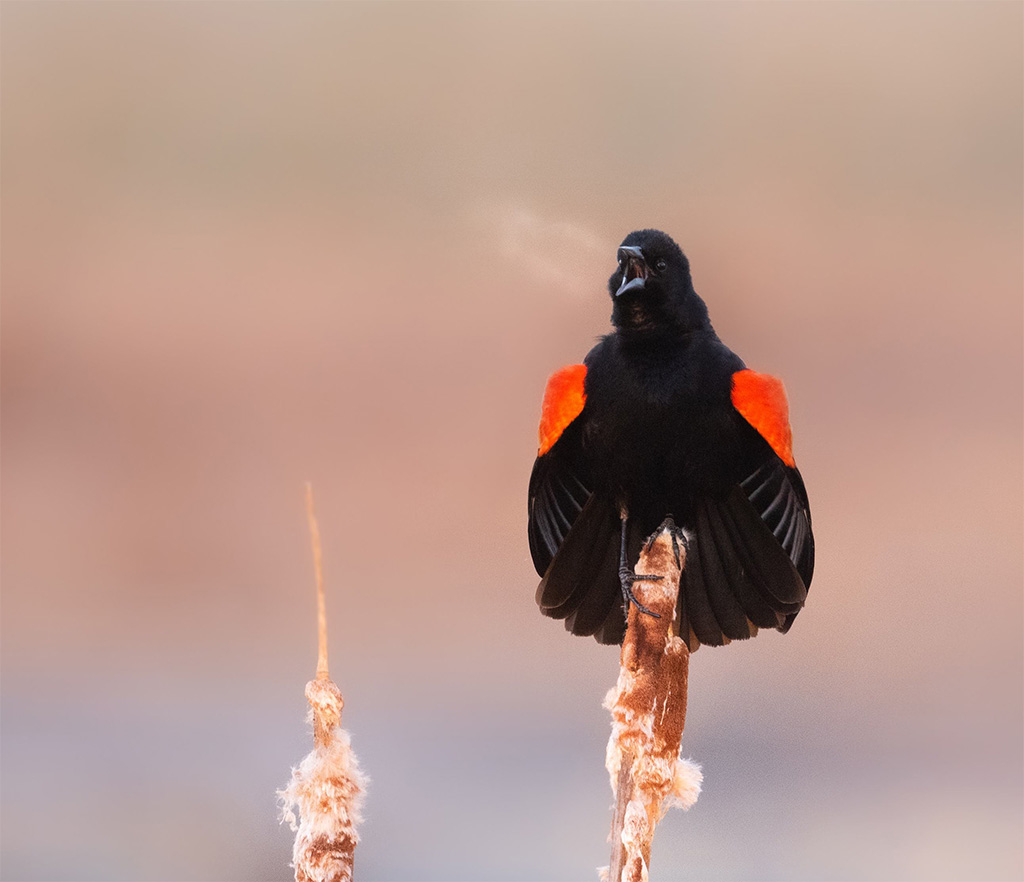 In 2019, researchers from the Cornell Lab of Ornithology found that North American bird populations have declined by 29 percent since 1970. The study showed that 90 percent of the bird loss occurred in only a dozen bird families, one of which is the red-winged blackbird family. The red-winged blackbird population has declined by 92 million birds in the past 50 years. This is perhaps not too surprising; these birds have been poisoned, trapped and shot for decades. In addition, habitat loss due to development and agriculture have hurt bird populations, and having fewer insects to feed on also likely plays a role. Declines in common bird species can have a great impact on a well-balanced ecosystem. Birds help with pollination and seed dispersal, they help keep insects in check and they dispose of rotting carcasses. Because bird declines are gradual, it is difficult for us to notice fewer birds each year, but the declines are happening all around us. 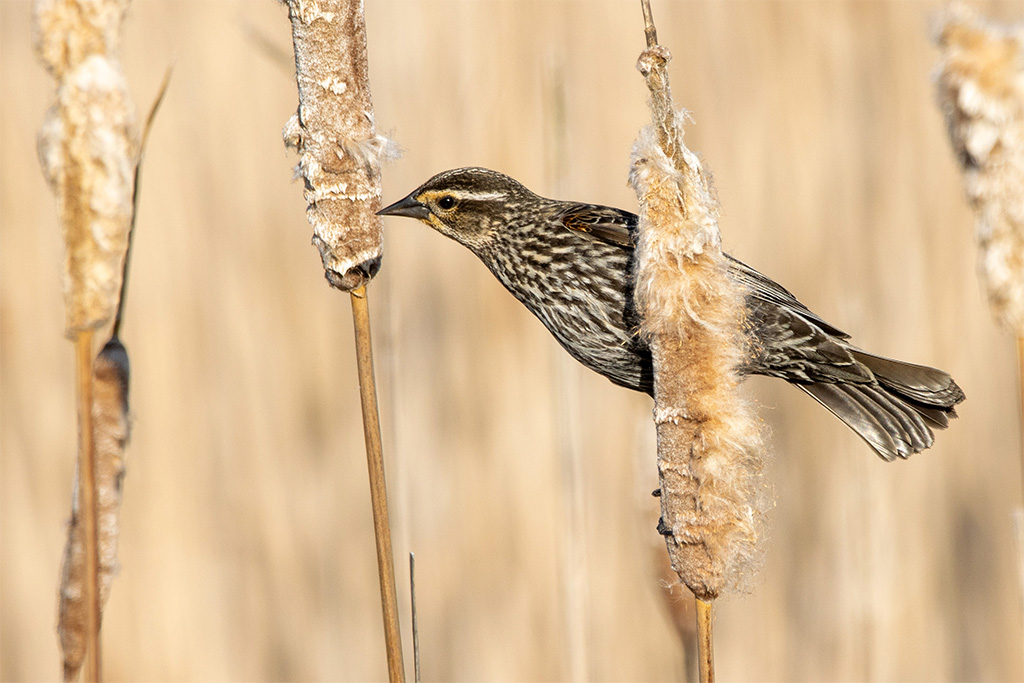 A female red-winged blackbird forages on a cattail in North Cambridge. Seeds and insects make up most of its diet. (Photo: Richard George)

In a letter to a friend, Benjamin Franklin wrote:

In New England they once thought Black-birds useless and mischievous to their corn, they made Laws to destroy them, the consequence was, the Black-birds were diminished but a kind of Worms which devoured their Grass, and which the Black-birds had been used to feed on encreased prodigiously; Then finding their Loss in Grass much greater than their saving in corn they wished again for their Black-birds.

Let’s hope that something similar does not happen to us today. Our planet would be greatly diminished if red-winged blackbird populations continue to decline. 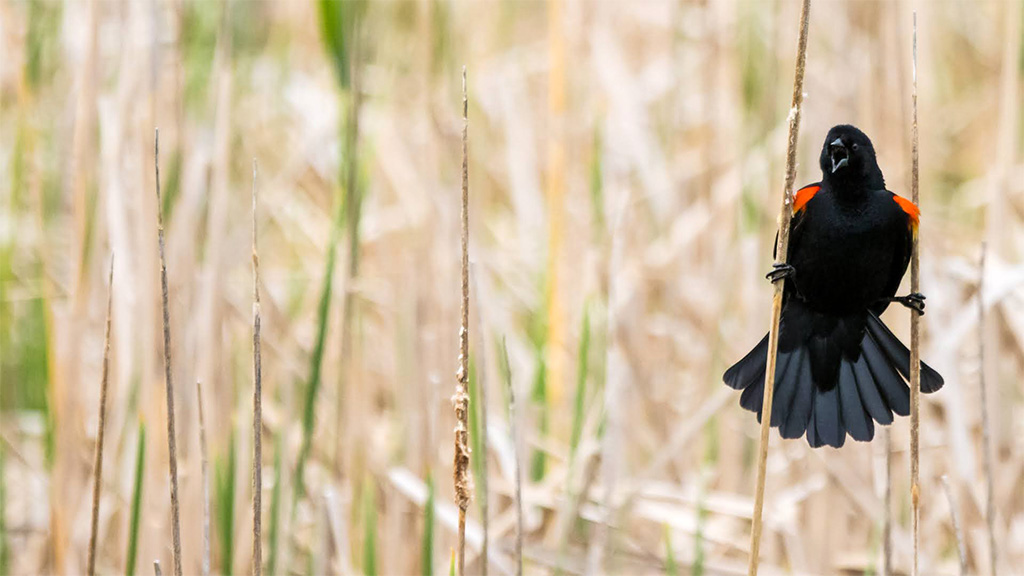 Feature image is by Richard George