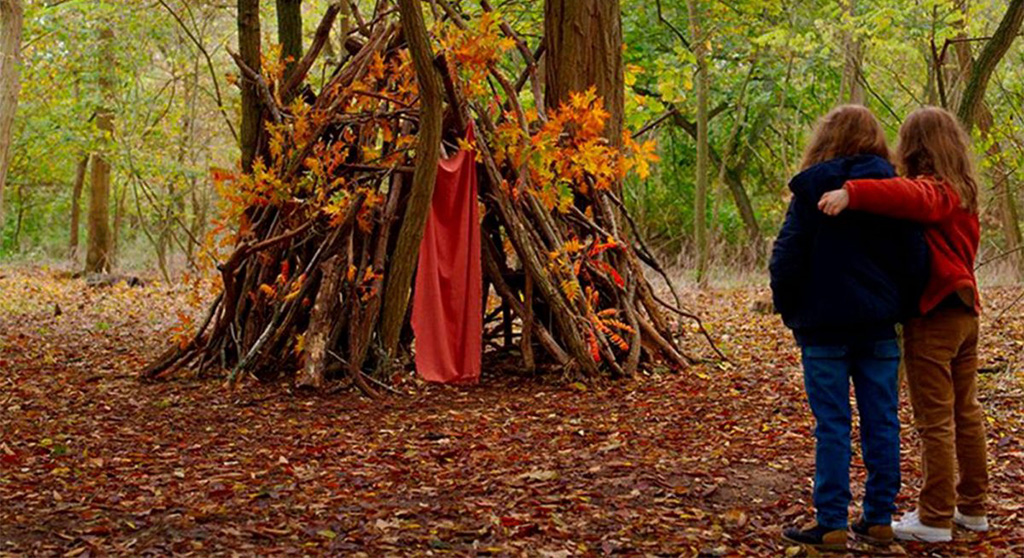 César award winner Céline Sciamma’s latest follows the travails of a little girl visiting her grandmother’s home with her parents. While playing in the woods, Nelly (Joséphine Sanz) notices a similar girl who lives in an identical home. Did Nelly wander into a Stepford suburban hell? No, it’s a form of time travel, though Sciamma is more concerned with exploring the connection among three generations of women than the logistics of how her protagonist can go back in time.

While not as arresting as “Portrait of a Lady on Fire” (2019), this film also relies on the intensity of female relationships. Instead of lovers, Sciamma switches her focus to early family and friend dynamics. Despite their closeness, there is a chasm between the mother and daughter. Adult Marion is working through grief that is exacerbating her already fragile mental health; Nelly’s insecurity grows with the increasing impermanence of the women in her family – her grandmother because of death and her mother because of depression. Only exceptional happenstance bridges the gap.

Sciamma embraces time travel without the sci-fi world-building and creates a ghost story using the living. By taking fear out of these genres and turning them into quotidian and poignant experiences, Sciamma erases fear from death and loss. Depicting scenarios in which fear is a reasonable response and showing a better alternative repurposes the genre into a life-giving drama. For example, a living, younger version of Nelly’s grandmother is lying in bed. Nelly reacts as if she sees her grandmother’s specter, but later contemplates this sensational development by occupying the same bed in the present – a shared, intimate communion of space between the living and dead. Once Nelly confirms that time travel has no negative consequences, it becomes playful. Going back in time to engage with your loved ones is preferable to being alone in the present. Relationships are elevated to the status of more common movie tropes of going back in time to save the world or stop a horrendous cataclysm. All of Nelly’s unspoken wishes come true. Her curiosity about her mom’s childhood is satisfied, and she gets more time with her grandmother.

Like Julia Ducournau with “Titane” (2021), Sciamma explores the effect of parental psychological distance on a child. Nelly yearns for closeness even before time opens itself up to her. The little-girl protagonists of both films reach out to their parents while driving, but the roles of parent and child are reversed in Sciamma’s film. Instead of becoming anti-social, Nelly assumes the role of a parental figure who nurtures her mother in the past and present so her mother can become a better parent. The narrative is structured like an ouroboros reminiscent of “La Jetée” (1962), the black-and-white short that inspired “12 Monkeys”(1995). Befriending Marion as a child creates space for Nelly to express the harmful impact of adult Marion’s emotional distance. Her friend’s awareness changes adult Marion and makes her willing to stay with her daughter, which seals the rift in time. Nelly does not need to be with her friend once her mother returns to her. Time travel is unnecessary once the present family is functional.

Sciamma does not seem to consider the long-term damage that Nelly’s parentification can inflict. Nelly’s eagerness to fill the void as her mother’s husband and friend is the death of her childhood.