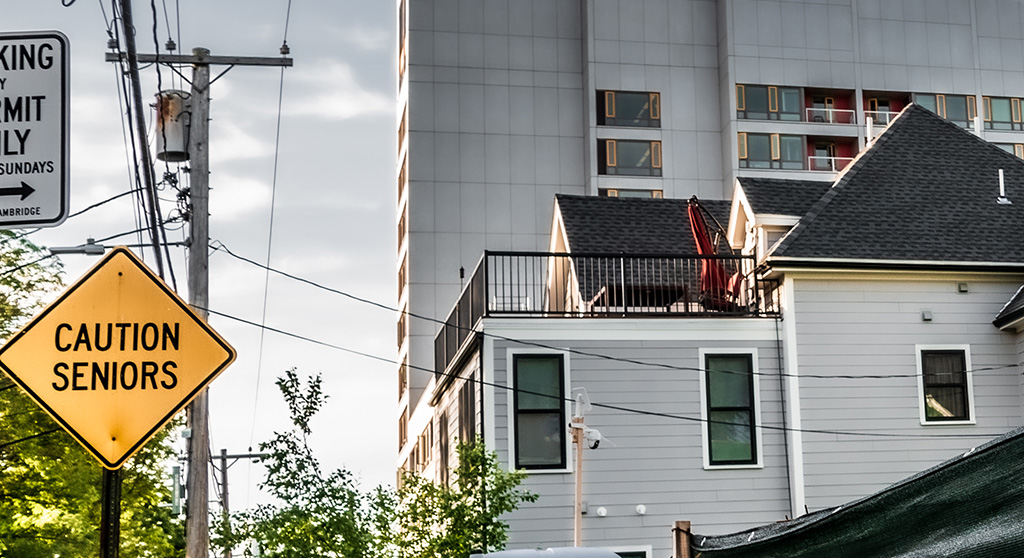 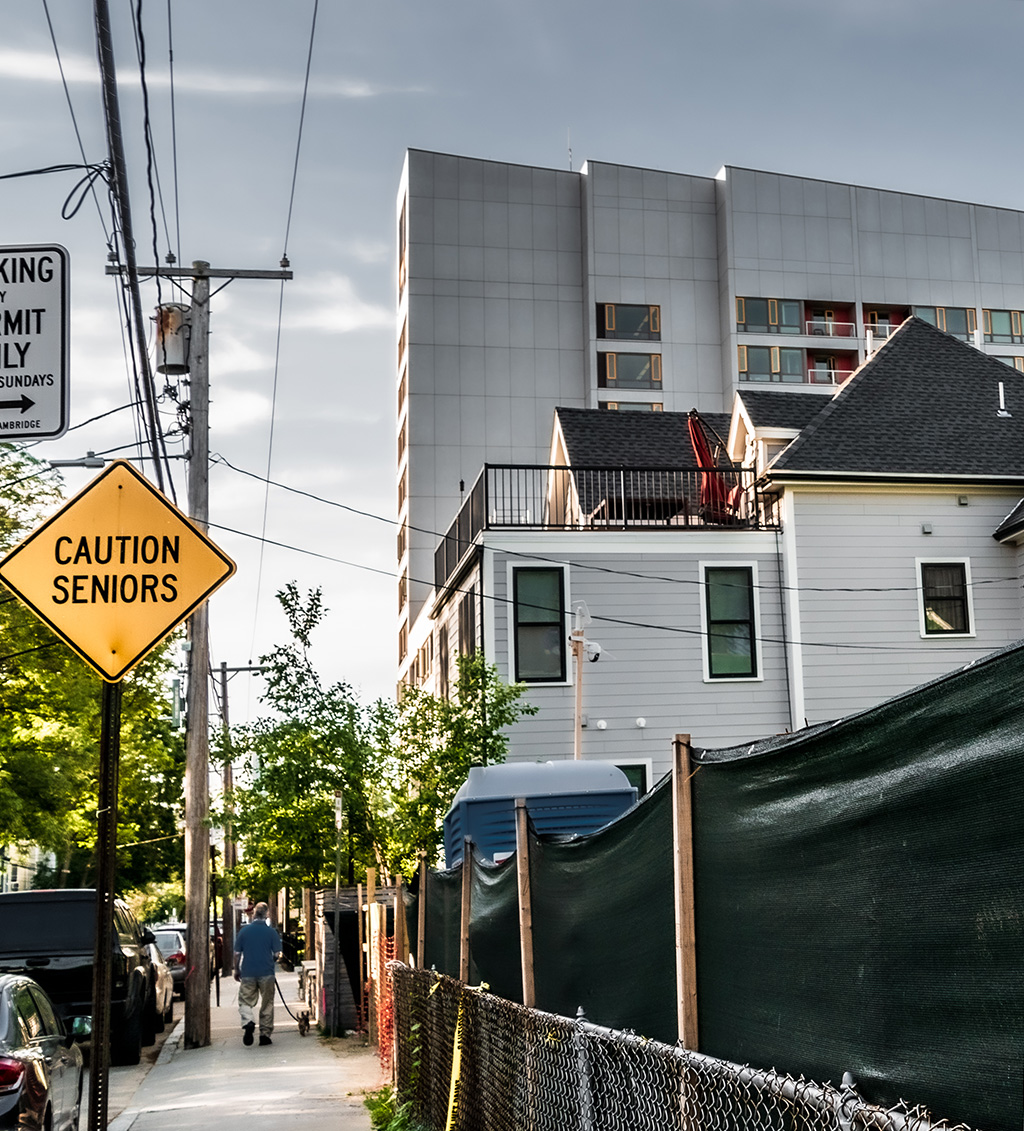 Drivers are warned to be cautious around the LBJ Apartments in Cambridgeport. (Photo: Tyler Motes)

Lawyers for Ashley Monturio, who is on trial for allegedly leaving the scene after running over an 80-year-old woman in a Cambridgeport parking lot, created their own video to counter the prosecution’s surveillance recording showing the Sept. 6, 2018, incident. The defense presented a simulation in Cambridge District Court on Tuesday to support its contention that Monturio wouldn’t have seen Romelia Gallardo as she bent over in front of Monturio’s SUV.

The simulation used a camera hung from the roof inside Monturio’s Infiniti to reproduce what she purportedly would have seen while stopped at the opening to the parking lot at 150 Erie St., just before running over Gallardo. The video presentation showed no sign of Gallardo. A defense witness who helped create the presentation said an outline on the passenger side of the vehicle well below the windshield represented Gallardo, who was less than 5 feet tall and weighed 98 pounds.

The defense team also sought to bolster Monturio’s claim that she didn’t know she had hit Gallardo as she left the parking lot at the LBJ Apartments public housing project, where Gallardo lived. A defense witness described filling burlap bags with sand to replicate Gallardo’s body, then driving the SUV over the bags while the vehicle was equipped with a camera and accelerometer to measure any bump.

On the day of the accident, Monturio, of Pembroke, was on her way to a job interview in the neighborhood and mistakenly drove into the LBJ Apartments parking lot. She turned around to leave, stopping at the entrance and exit.

Gallardo, wheeling a walker, had left via a side door to the building and was walking through the parking lot toward Erie Street. She walked beside the passenger side of Monturio’s Infiniti SUV, then turned in front of the vehicle and bent down. Monturio then drove over her onto Erie Street.

Monturio stopped and called 911, telling the dispatcher that someone was on the ground and she didn’t know what had happened. The dispatcher asked her to remain until emergency workers arrived, but Monturio said others were at the scene and she needed to go to a job interview. She left.

Another surveillance video presented Tuesday disclosed that Monturio actually entered a second LBJ parking lot on the other side of the building after talking to the 911 dispatcher. She turned around and left that parking lot before finding the correct location for her interview less than a block away.

Testimony in the trial has focused on what Gallardo and Monturio did and what Monturio could have seen and felt. Still, the decision may hinge on legal issues.

Cambridge District Court judge David Frank denied two motions on Tuesday from Thomas Hoopes, Monturio’s lead attorney, to dismiss the case. In the first motion, Hoopes said the prosecution couldn’t show that the accident occurred on a “public way,” as the law prohibiting a motorist from leaving the scene of a personal injury requires; the defense has presented testimony identifying the LBJ parking lot as private property not accessible to the public. Middlesex County Assistant District Attorney Ashlee Mastrangelo has countered with testimony that nonresidents of the building could park there under certain conditions.

Hoopes’ second challenge, which could be more persuasive, argued that Monturio did not cause the collision. This contention is backed by the State Police Collision and Accident Investigation unit, which found that the crash occurred because Gallardo should have made sure that Monturio could see her before Gallardo crossed in front of the SUV.

Responding to Hoopes, Mastrangelo contended that the investigation found “fault” and not “cause” and wasn’t relevant to deciding whether Monturio left the scene of a personal injury. Monturio “did collide with Ms. Gallardo,” Mastrangelo said. She argued against dismissing the charges on Tuesday, saying “there is sufficient evidence that this could go to a fact-finder,” namely the judge on the case.

Frank, the judge, agreed but warned Mastrangelo that “the government has to establish that the defendant caused the injury” in some way. “There is a causation issue,” he said.

The judge and both sides mentioned a 2015 appeals court decision on the issue. In that case, Norfolk County prosecutors charged Daniel Conroy with leaving the scene in Walpole after he hit a driver going the wrong way on a cross street when she suddenly entered the intersection with his car. The woman suffered serious injuries; Conroy left and was found elsewhere.

The state appeals court upheld a lower court decision dismissing the charge. The appeals court said prosecutors had failed to show that “the manner in which the defendant operated his motor vehicle was a contributing factor to the accident.” In the Conroy case, the state police Collision and Accident Reconstruction unit had found that Conroy didn’t cause the accident in any way.

The Conroy ruling did not create a precedent, though. A note with the ruling said it was a “summary decision” directed mainly to the parties in the case and, as such, could not be considered a binding precedent. The case also was decided on a narrow ground. The judge in the Conroy trial had issued an instruction to the jury saying the prosecution had to prove that Conroy “was in some way an actor or partial cause of the accident” and prosecutors didn’t object to the instruction. Therefore, “it became the law of the case,” the Appeals Court panel said. At the same time, the judge’s instruction was in line with rulings going back to 1932, a footnote in the ruling said.

Conroy was also charged with causing serious injury while driving under the influence of alcohol, but a jury acquitted him.`