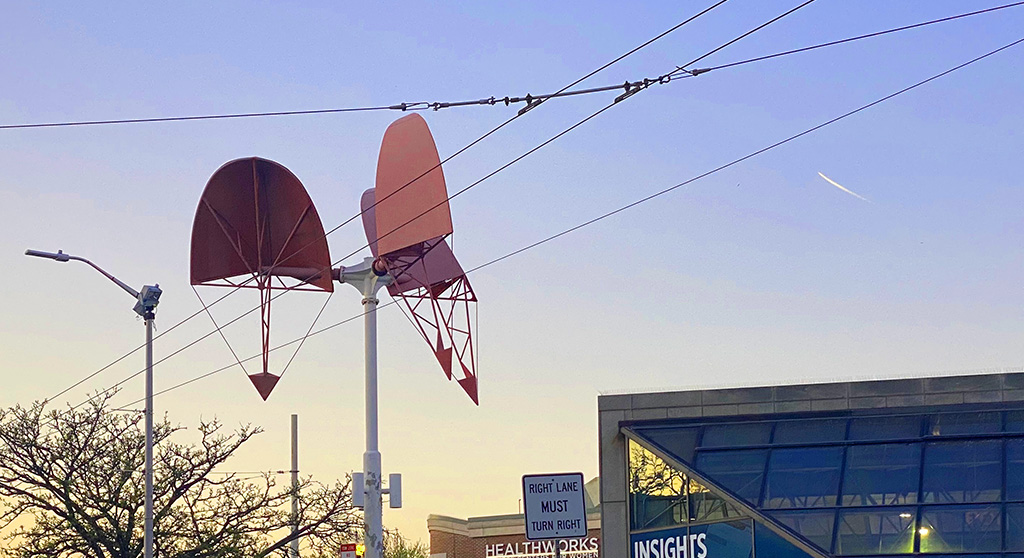 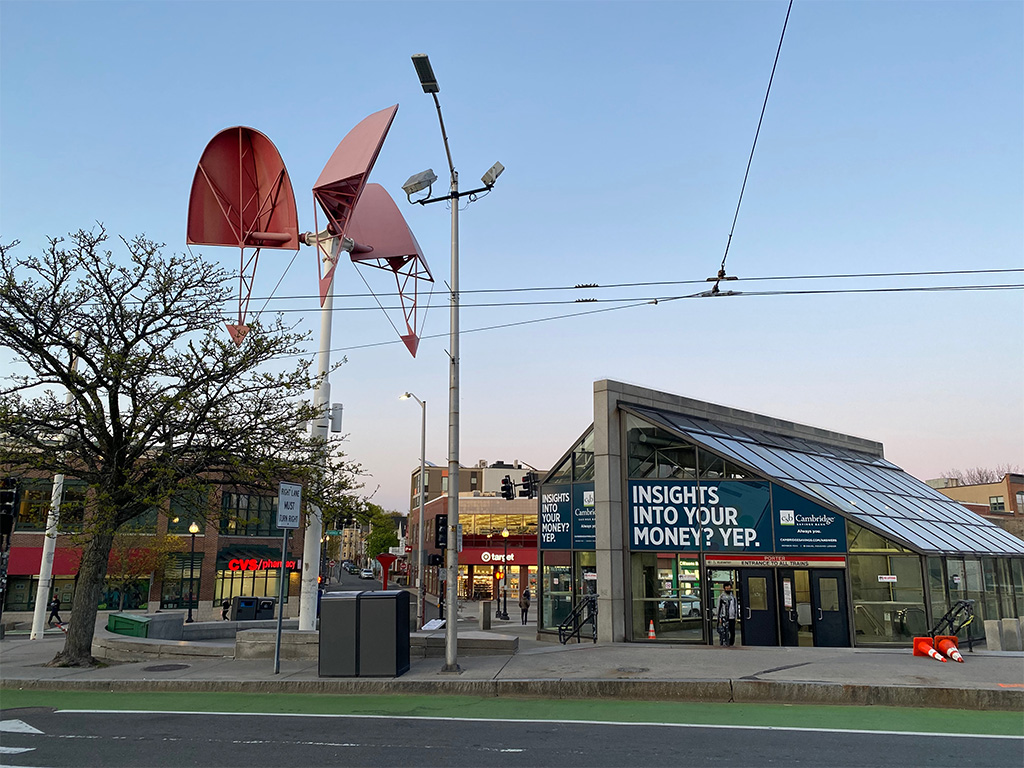 The trolley wires in Porter Square are uncharged, unused and an impediment to traffic planning. (Photo: Marc Levy)

“The MBTA is committing to a July removal … and will continue to work with us on the other sections for removal,” Siddiqui said. “It’s good news indeed.”

As long as the overhead catenary wires are up – though the Massachusetts Bay Transportation Authority stopped using them to power its buses months ago – transportation officials are constrained in how they redesign streets to accommodate new protected bike lanes.

Keeping the now-useless wires up would have meant losing significant amounts of parking in the square, and they still must be dealt with to avoid being an impediment to parking along stretches of Massachusetts Avenue. Until recently, the wires and whether a concrete median strip was kept were the difference between losing nearly all parking or only about half; businesses said losing all parking spaces on the avenue except for loading zones and spots for people with disabilities would have been catastrophic. (The median is expected to be mostly removed as well.)

The council voted April 25 to reject delays on construction until the MBTA had taken away the wires, despite questions about when that would happen. A letter sent by Siddiqui to the agency April 21 asked for urgency.

On Monday, general manager Steve Poftak responded, saying that although the MBTA’s Power System Maintenance group was “working at capacity” on the green line extension and other projects, he would “make our power department available to remove those wires in July.”

The July timeline is only for the 1,450-foot segment of catenary wires in Porter Square, though “over the next few months, we will complete our plan for removal of all infrastructure in Cambridge, Belmont and Watertown associated with the former trolleybus operation,” deciding whether the work is best done in-house or through a contractor, Poftak said. “The MBTA will continue to coordinate with city staff on the timeline for this overall effort” and look for ways to move faster where there’s “synergy with other active construction projects.”

Transportation planners’ newer work assumes the wires come down, staff said at an April 26 community meeting about Porter Square – and showed a design relying on it. Until the wires were gone, there can be only 30-minute loading zones under them, said Brooke McKenna, assistant director for street management. That way, drivers will be nearby to move their cars if there’s a fire or other emergency.

In the situation presented April 25, the square had 34 street spaces available to the public and there were hopes of saving 17; by the community meeting the next day, things were improved. Though staff now said there were currently 31 spaces, plans suggested a net loss of only seven “when you include all types of parking that are available for non-residents,” project manager Andreas Wolfe said. (That’s still a loss of more than 20 metered parking spaces, a resident noted.)

Siddiqui’s news was greeted with cheers Monday. “Can we say a big hallelujah for the announcement?” councillor Patty Nolan said.