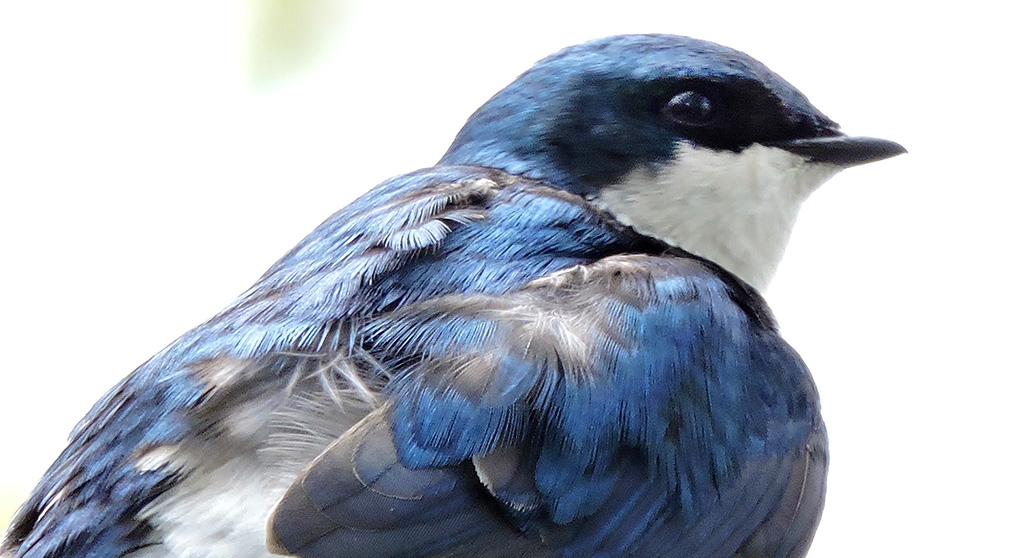 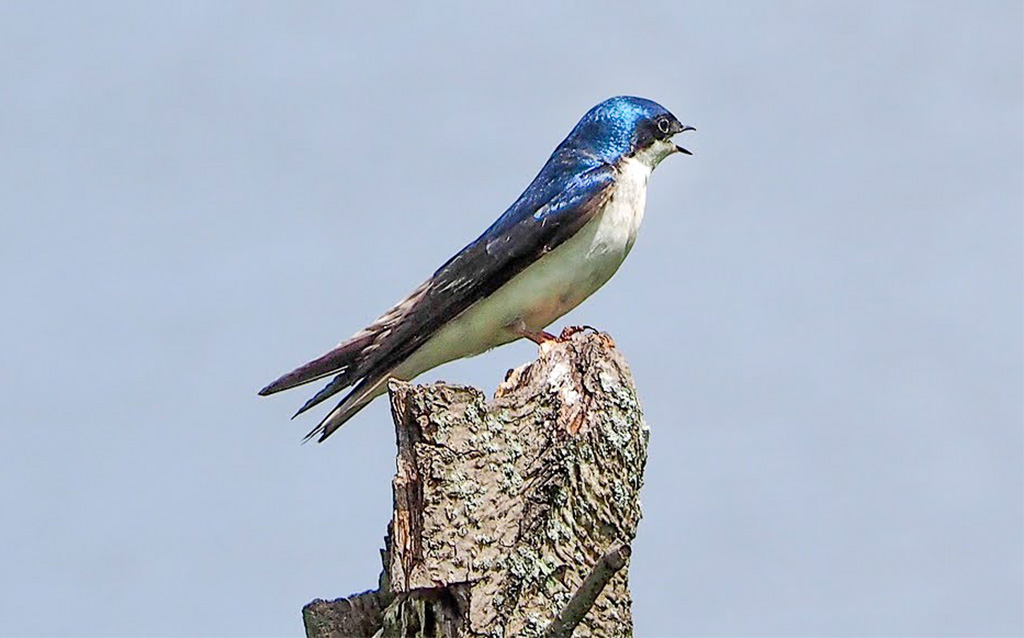 Tree swallows are about 5 inches long and weigh less than an ounce. (Photo: Jeanine Farley)

Tree swallows are the first swallows to arrive each spring, journeying north into Massachusetts from late March to April. They don’t stay too long, as they migrate south to Florida and Central America by late summer.

During cool, rainy periods in spring, tree swallows fly low over rivers and lakes, hunting for insects near the water’s surface. You might notice tree swallows sweeping and swiveling through the air as they snatch insects, especially flies – their favorite food – but they also devour spiders and fruit when available. 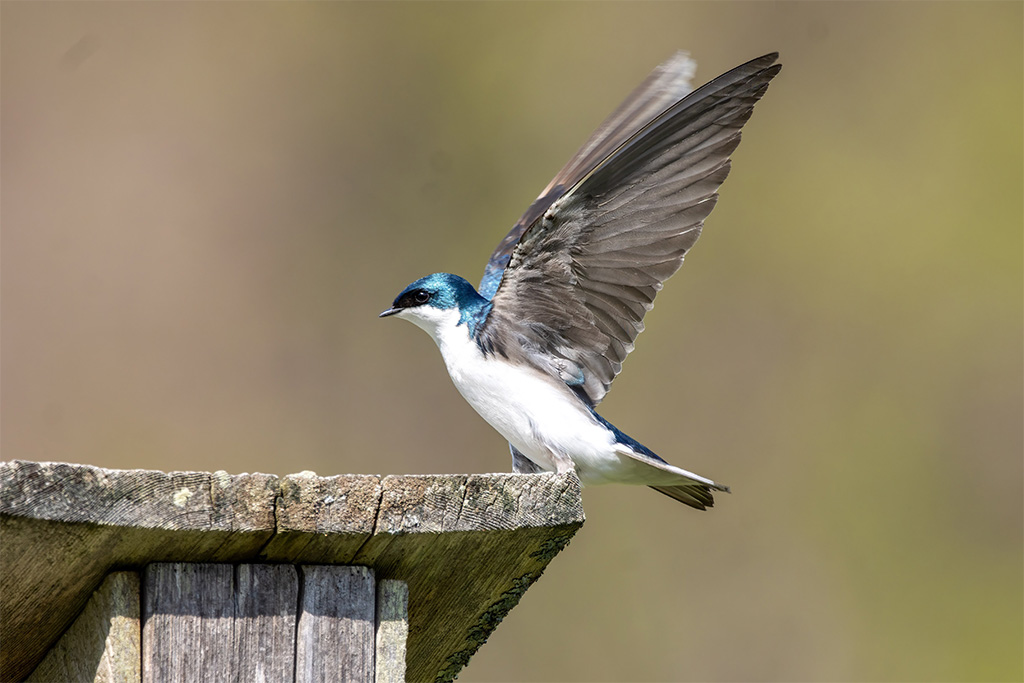 Tree swallows have iridescent blue heads and wings, are white underneath with black feathers around the eyes and are brownish on the underside of the wings. (Photo: Richard George)

Tree swallows breed near water in early May (or sometimes even earlier, as a result of climate change). Though they usually roost on reeds over water, during breeding season they nest in holes in trees or nest boxes. Swallows return to the same nest area each year if they have raised a chick there successfully in the past. If not, about 28 percent will find a new location.

If there are too few nesting sites, males may bicker over the best. Swallows defend an area about 15 feet out from their nests. After a male tree swallow finds a spot, he perches near it and calls. 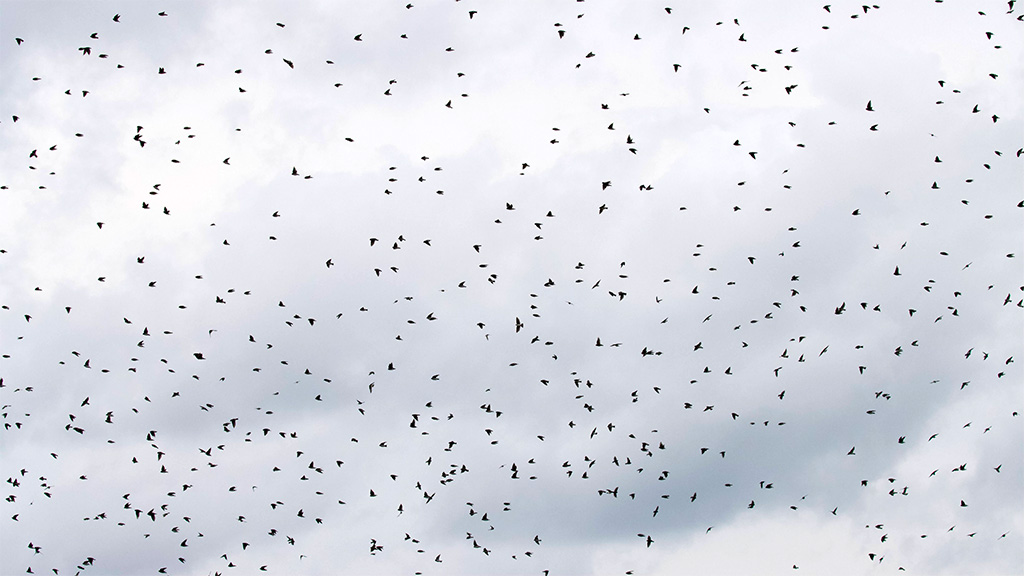 Migrating tree swallows gather in huge flocks about an hour before sunset and form a swirling cloud above a roosting site. (Photo: Brian Rusnica) 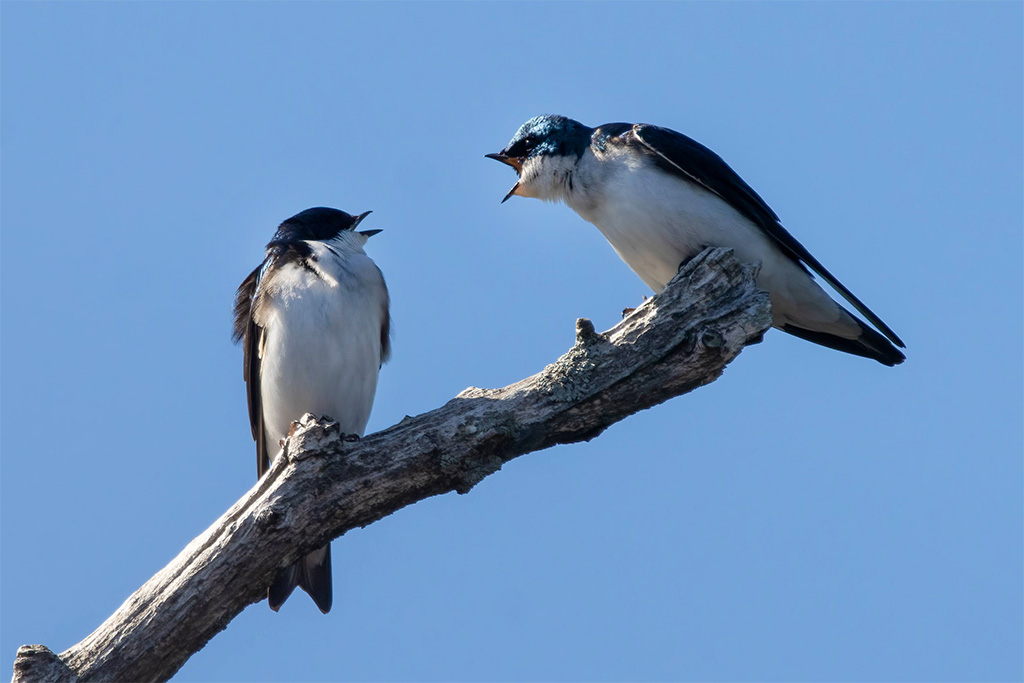 A pair of tree swallows carries on an animated conversation. (Photo: Richard George)

After a courtship display and pairing, the males flies to his nest site followed by the female, who inspects. If the site is acceptable, the female swallow builds a nest from grass, pine needles, and aquatic plants. She lines it with feathers, some of which the male may collect from clashes with other males. The feathers insulate the nest and keep the chicks warm.

From 40 percent to 70 percent of tree swallows have extra-pair paternity, which means females breed with more than one male, usually a floater, or unpaired, often young, bird. It’s the male and female mated pair that work together to raise and feed the hatched chicks, though. In early May to mid-June, the female lays four to seven eggs, one per day, which she incubates for two weeks. The chicks do not all hatch at the same time, and the female begins feeding the first chicks; if food is scarce, she may ignore the later-born birds. Chicks close to the entrance hole also tend to be fed more, as well as those who beg first or most. 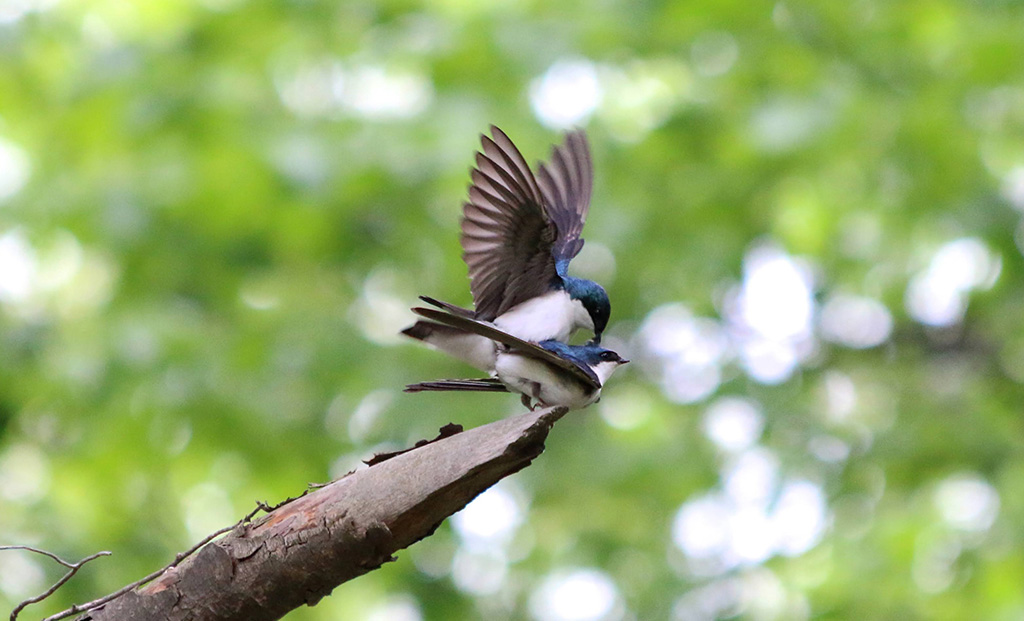 A pair of tree swallows mate at Fresh Pond in May. (Photo: Brian Rusnica)

In addition to insects, tree swallows feed their chicks calcium, which comes from fish bones, clam shells, or egg shells. You might spot a tree swallow searching through your backyard compost bin for bits of eggshell for their young.

Still, chicks grow faster when there are plenty of insects on hand. During cold, wet springs, many eggs and nestlings do not survive. In June or July, when the chicks are about 3 weeks old, they leave the nest. These youngsters sport brownish feathers. They molt in the fall, and their new winter plumage is similar to that of an adult. 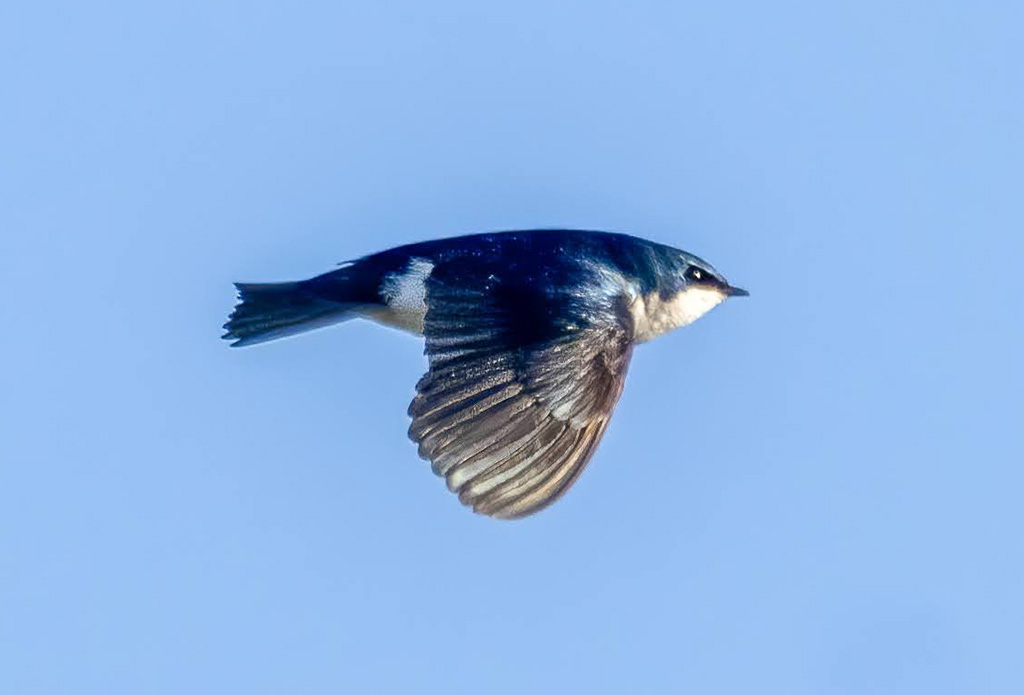 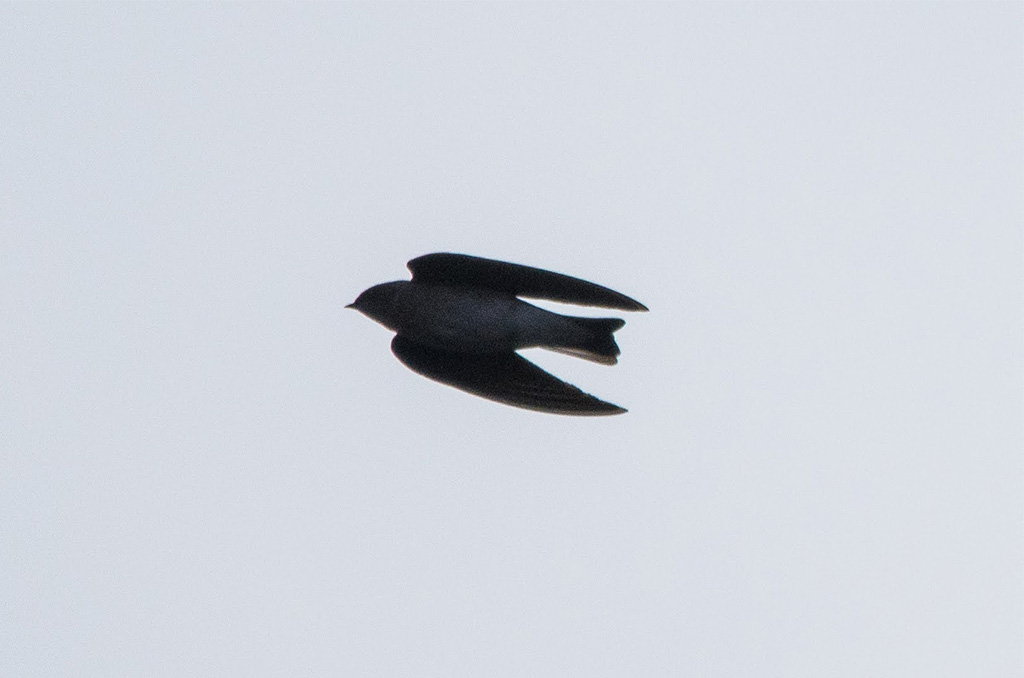 … and make a distinctive silhouette when they fly. (Photo: Richard George)

Only about 20 percent of tree swallows survive the first year, but even for birds older than one year, the mortality rate is still high – about 50 percent per year. Cold weather causes the most bird deaths; if a sudden spring snowstorm strikes, many tree swallows do not survive, while simple a simple chill leads to starvation from lack of insects to eat. Tree swallows also have many predators. Tree swallows work together to mob predators near a nest. The birds may dive at a predator, without actually striking it, while making tick-tick sounds. They especially dive bomb chipmunks, yet are less aggressive with animals that are more dangerous, such as snakes. 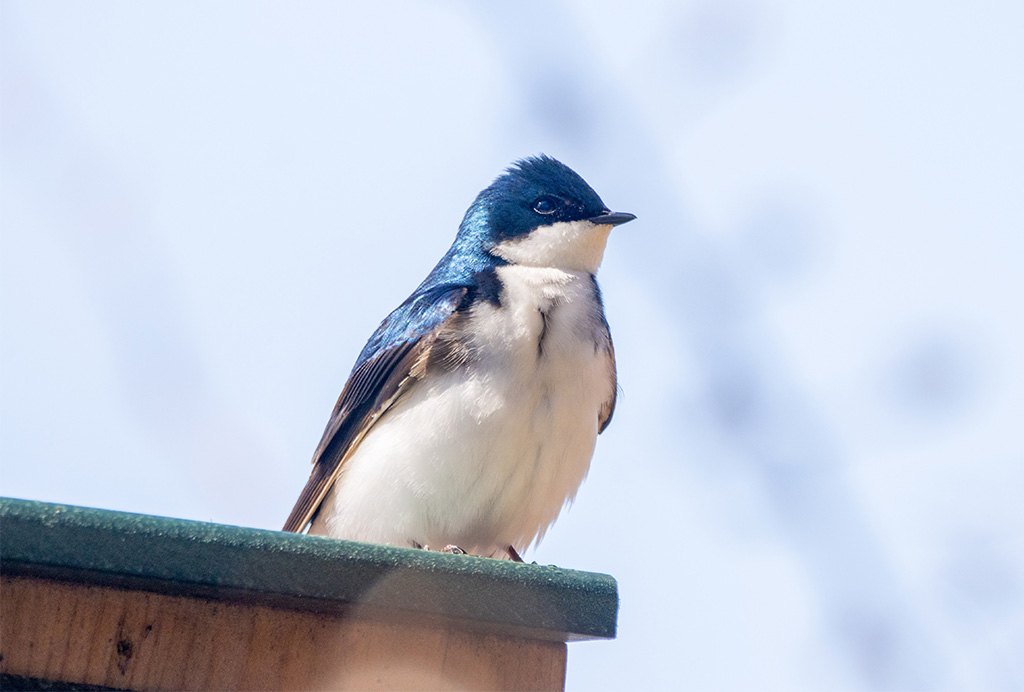 During July and August, tree swallows start flocking along the coast, where they line up on telephone wires near the shore in preparation for their migration south. In good years, some flocks may comprise tens or even hundreds of thousands of birds. The birds journey south in late August and September. Tree swallows are one of the best-studied bird species in North America, but even so, scientists do not know much about their lives during migration or during the winter. 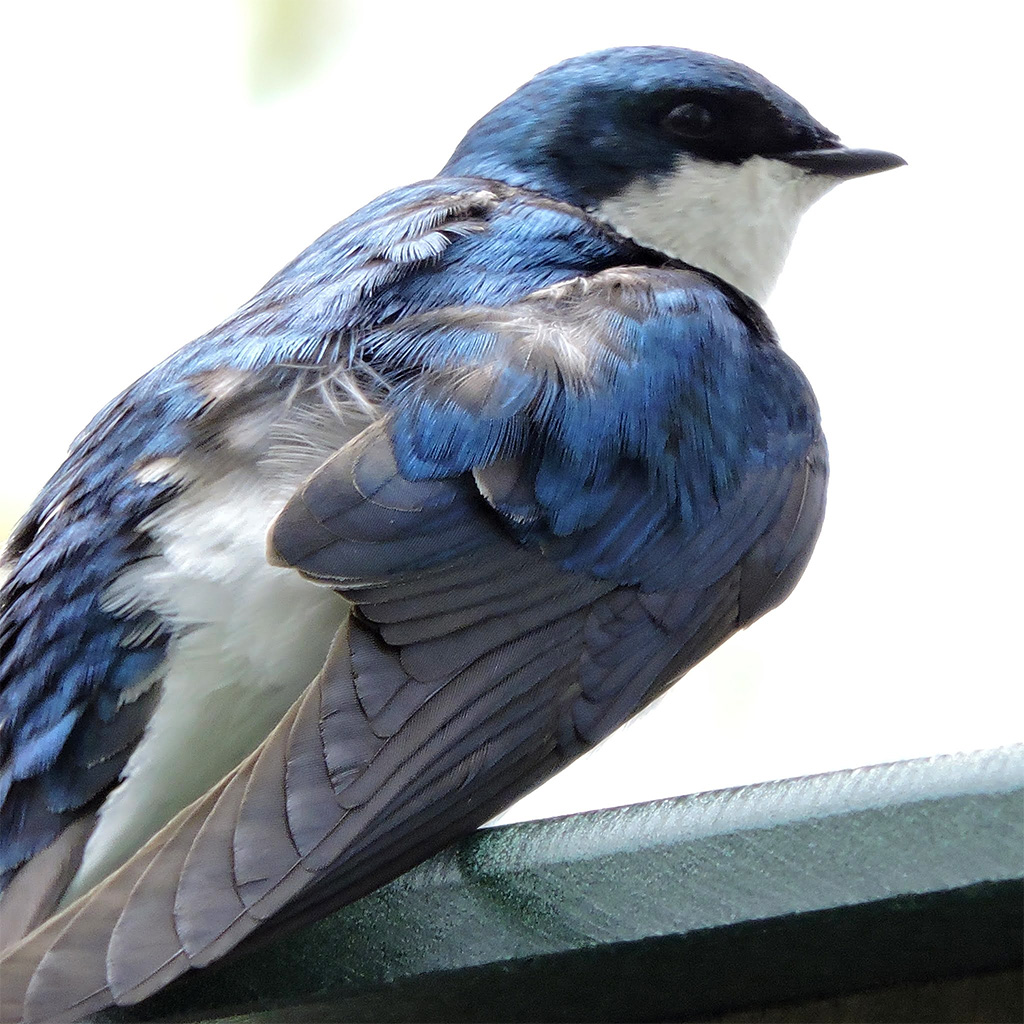