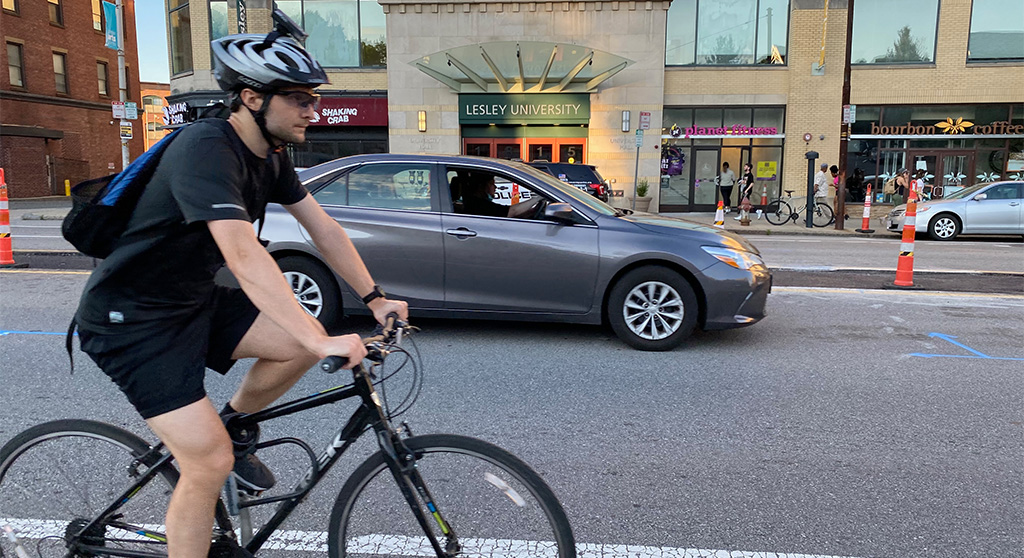 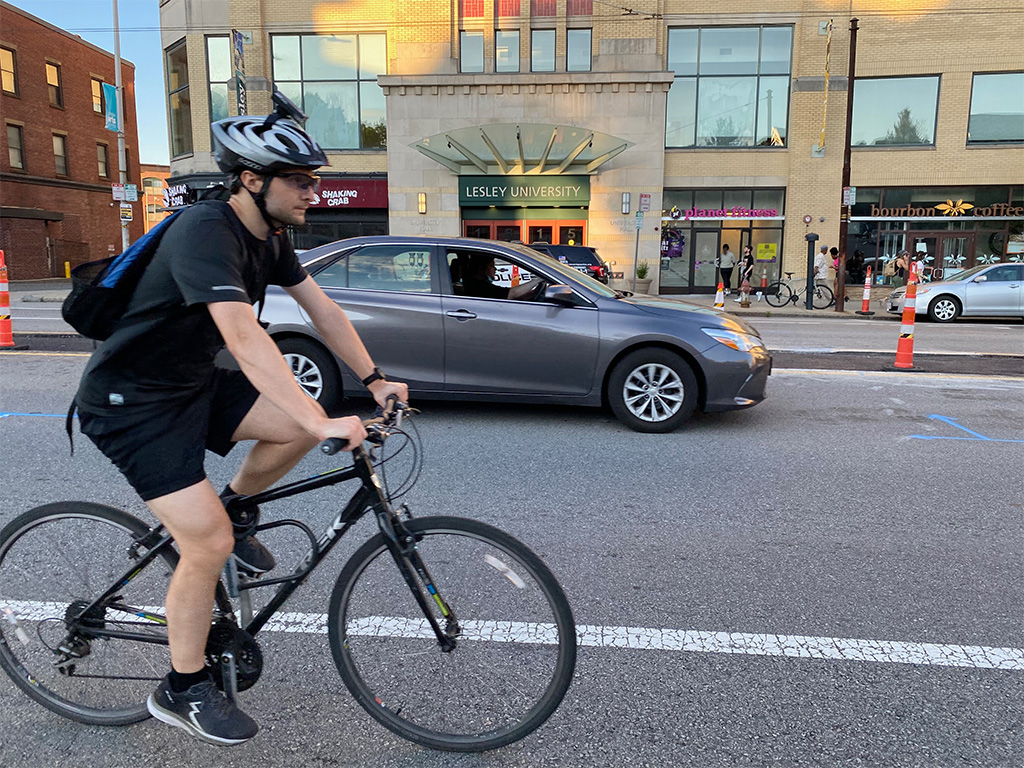 Commuters speed down Massachusetts Avenue on Tuesday south of Porter Square where a concrete median has been removed ahead of bike lane installations. (Photo: Marc Levy)

A lawsuit against the city over bike lane installations that cost parking spaces is based on flawed reasoning, and more bicyclists will be hurt or die if a judge grants an injunction to stop more lanes from being added and remove existing ones, according to a brief filed Wednesday by the Cambridge Bicycle Safety group.

The businesses, dental and medical offices and owners fail to show harm that would be solved by an injunction to stop bike lane installation, though an injunction would harm bikers and the city, according to the brief. And the lawsuit is based on a flawed reading of the law that’s unlikely to succeed in court, as well as wrong in saying the Cycling Safety Ordinance amendment was sneaked through during the pandemic, according to the text.

“Where plaintiffs have repeatedly failed to achieve their aims at the ballot box and before the City Council, they now attempt a spurious end run to subvert the will of the City of Cambridge’s voters and elected officials,” the filing says.

The suit was filed Friday by a group of business owners and residents called Cambridge Streets for All; the city has not commented on its merits, but its spokesperson said the Law Department would “diligently represent the city’s interests in this matter.” The bike safety group’s filing is an amicus brief by a third party, which outlines for a judge some arguments against the lawsuit and request for injunction that the city might also cite.

Some of the arguments in the brief are familiar, because they reflect debate that’s been going on for months.

While businesses owners say their revenue has dropped as parking has disappeared and customers and workers are stymied in finding easy access, for instance, the Cambridge Bicycle Safety group responds that the Covid pandemic is the more likely culprit, since there are reports of businesses suffering even where there are no bike lanes. In addition, they cite studies from within Cambridge showing that most customers don’t arrive by car, and national ones showing that bike lanes ultimately help businesses, not hurt them.

“Plaintiffs make no showing of a causal relationship between reduction in business revenue and the installation of separated bicycle lanes,” the brief says.

There’s also a “minimal scale of parking loss,” such as a total of seven on-street spaces lost from Porter Square, the filing says. The brief does not answer the lawsuit’s resistance to using side-street spaces to make up for the loss of spaces on Massachusetts Avenue; a press release Friday warned that under city plans, “quiet side street neighborhoods will become de facto parking areas and loading docks.”

When the lawsuit prepared by Boston’s Lawson & Weitzen firm says the city’s changes need approval from the state and neighboring communities, or that the council lacks the authority to pass the Cycling Safety Ordinance in the first place, “plaintiffs’ contention is wrong on the facts and statutorily unsupported,” the filing says. “Close review of the cited statutes reveals no basis for the plaintiffs’ claim.”

Meanwhile, “riding a bicycle in Cambridge is not safe, as crashes with motor vehicles lead to cyclist injuries and deaths,” the brief says, citing police data for crashes since 2015, and “stopping the installation of separated bicycle lanes, as well as removing existing ones, would therefore result in more injuries to bicycle riders.”

The filing also describes the process of getting the ordinance passed, beginning with a 2015 Bicycle Plan and an amendment process setting timelines for installation, which began March 16, 2020, and wasn’t enacted until Oct. 5, 2020. There were three council candidate pledges over the course of those years, group members note, making the lanes an issue in three elections in which a supermajority of candidates signed, or seven out of nine councillors who wound up voting on the law.

A publicist representing Cambridge Streets for All was contacted Wednesday to confirm the group had seen the brief and to get comment.

“CSA is declining to comment because it’s a legal matter,” said Shauna Hamilton, a publicist with Square Communications.