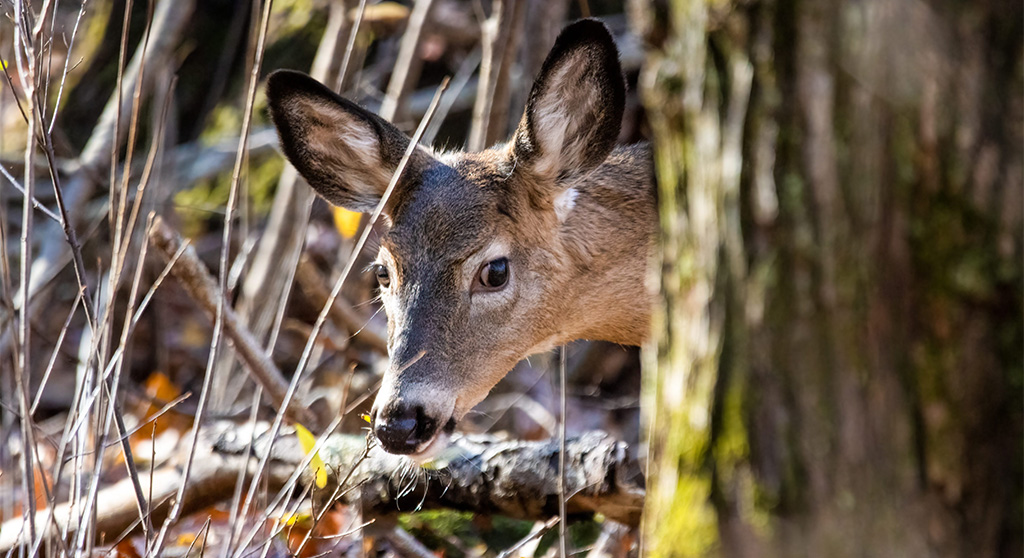 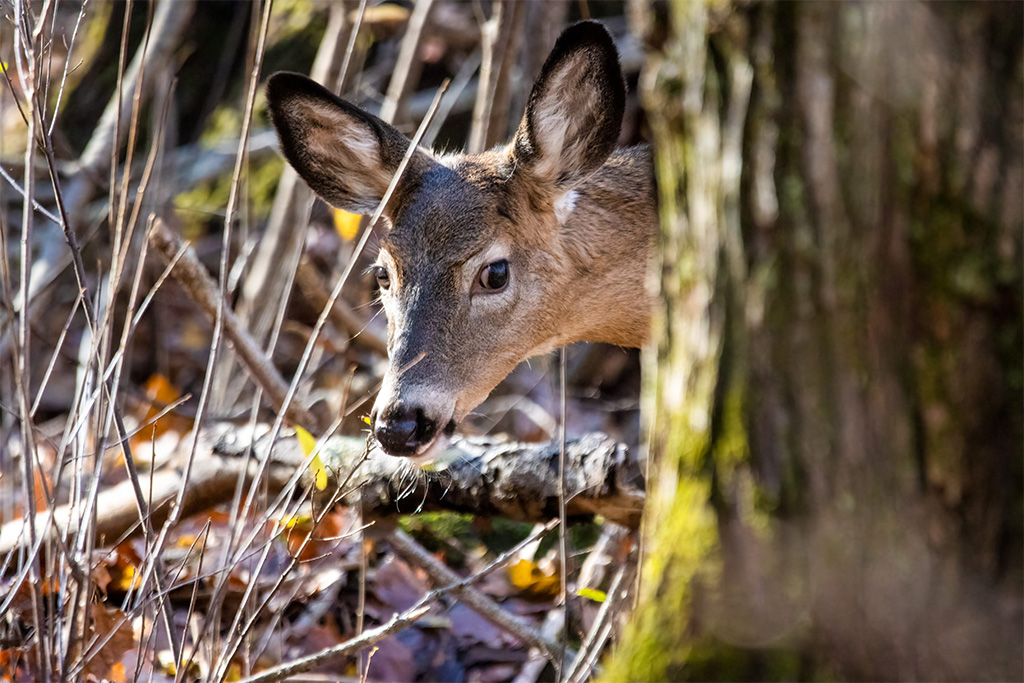 It’s hard to believe that a mammal as big as a deer is found in a city as urban as Cambridge, but the deer are here. In early colonial days, the animals were numerous, including on nearby islands. Deer Island in Boston Harbor was named “because of the Deare which often swimme thither from the Maine [the mainland], when they are chased by the woolves: some have killed sixteene Deere in a day upon this land.”

When European settlers arrived in North America, it is estimated that there were about 30 million deer. Settlers hunted them for food, for clothing and for market. Europeans greatly valued deerskin: They used the hides to make clothing and to cover books, boxes and trunks. This demand benefited the colonial economy, and the skins were used like currency. Merchants priced their goods by the number of bucks required to buy them. (This is the origin of the term “buck” as a synonym for dollar.) 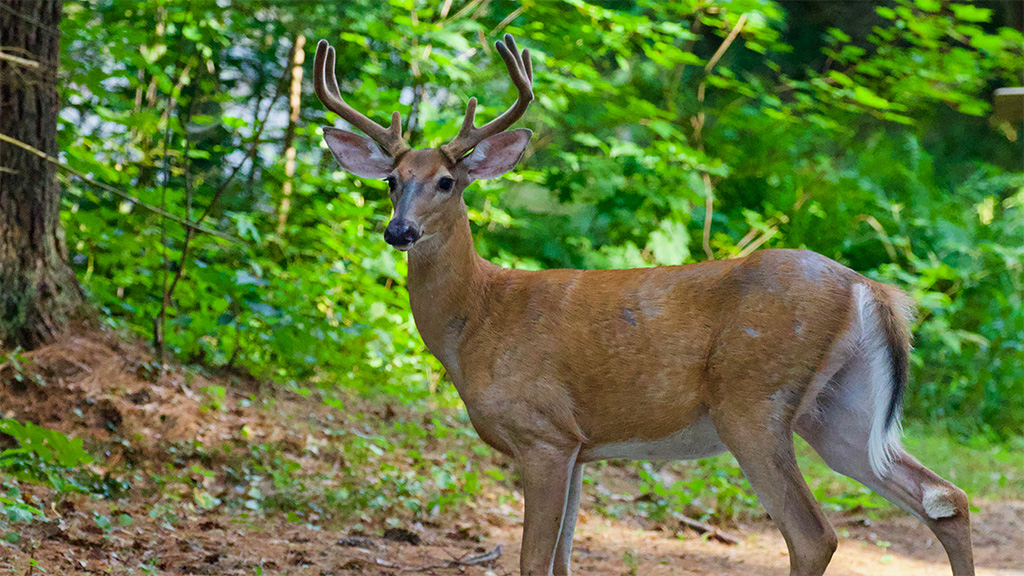 Male deer (bucks) grow antlers during the spring and summer and shed them in late winter after the breeding season. (Photo: Brian Rusnica)

Relentless hunting reduced the size and number of herds. Throughout the 1600s, the numbers of deer declined rapidly. Some colonies set limits on hunting. For example, Portsmouth, Rhode Island, in 1646 enacted this law: “There shall be noe shootinge of deere from the first of May till the first of November; and if any shall shoot a deere within that time he shall forfeit five pounds.” By 1720, most of the colonies had limits on hunting. By the mid-1700s, there were few deer near colonial settlements.

In the 1800s, the numbers continued to decline. Deer prefer to live at the edges of forests so they can graze in clear areas but vanish into the woods if danger arises. As settlers razed the forests for farmlands, fewer and fewer forest edges remained. By the end of the 1800s, there were fewer than a million deer left in North America. To save the species, the U.S. Biological Survey encouraged people to raise some in captivity. (One of the earliest deer parks in the United States was on the Lyman estate in Waltham.) Deer remained in only the most remote places. 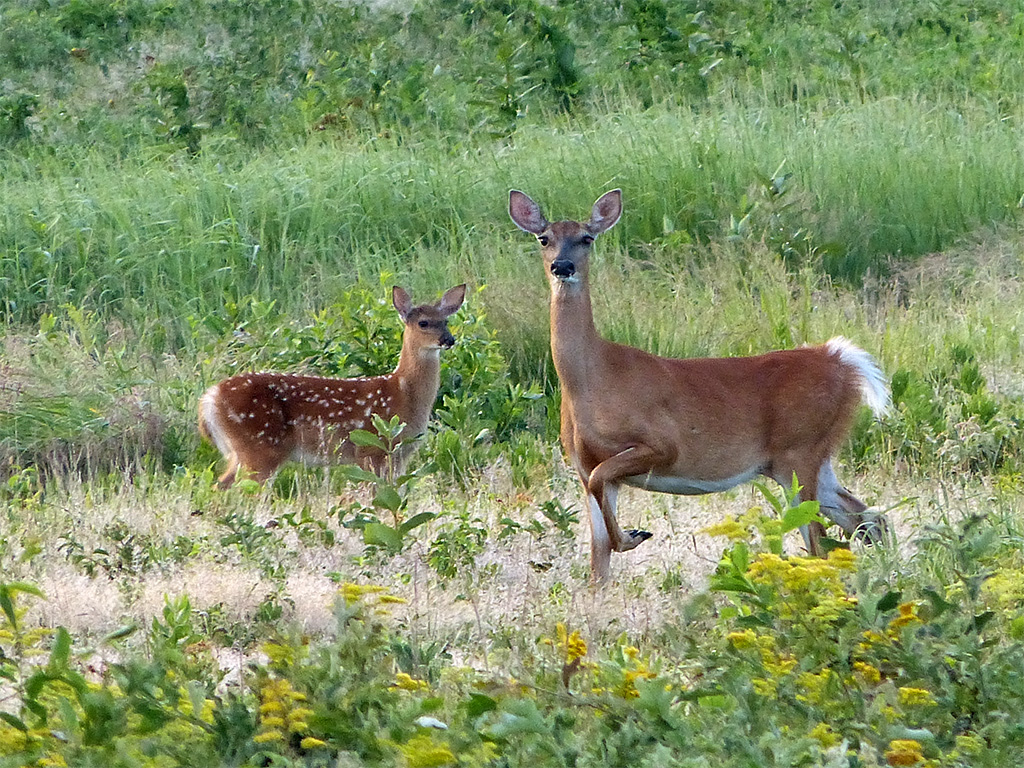 Fawns have white spots that help camouflage them from predators. The spots disappear after three or four months, when the deer molts. (Photo: Brian Rusnica)

Northern New England was one such place, for logging had created a new range. Deer spread into northern Maine, New Hampshire and Canada, where they had never lived. At about this time, a conservation movement began, and states tightened their game laws. In 1873, Maine set a bag limit on deer – the first of its kind – of three per hunter per season. In 1898, Massachusetts closed the entire state to deer hunting for five years. By this time, natural predators of deer (wolves, bobcats, mountain lions) were almost gone. The population began to rebound in response to these favorable conditions. 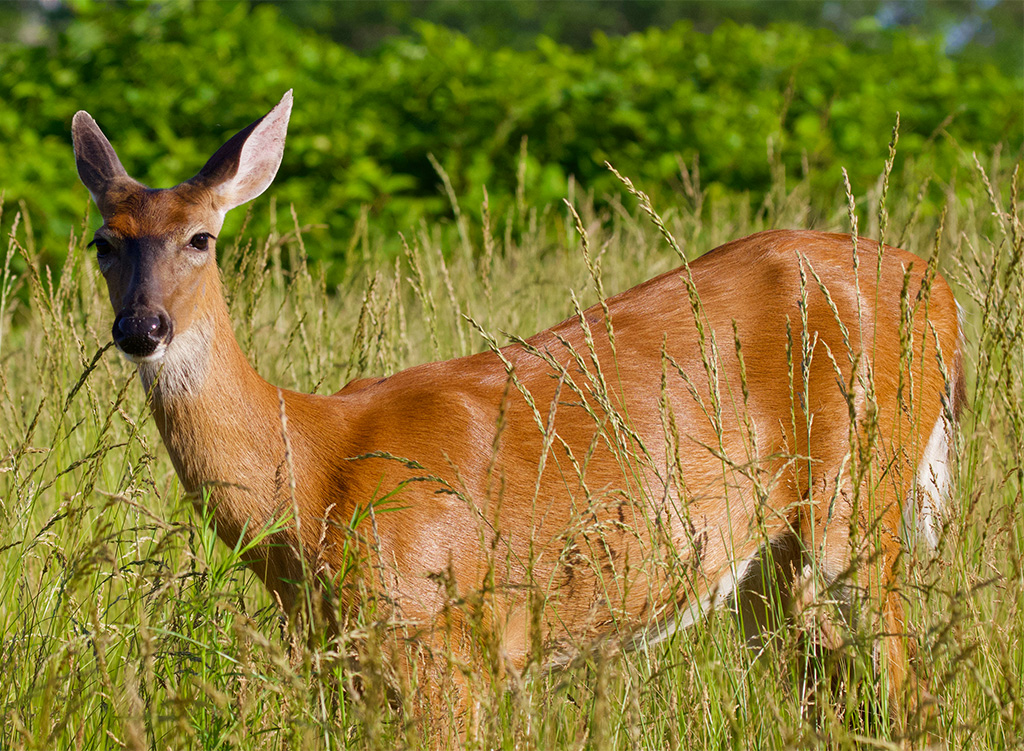 White-tailed deer prefer forest edges where they can graze on grass but escape quickly back into the forest if danger presents itself. (Photo: Brian Rusnica)

Today, suburban development creates the forest edge habitat that deer prefer. The deer population today totals 30 million – the same number here when the first Europeans arrived. Ninety-five thousand of these deer live in Massachusetts. Without predators to keep them in check, hunting is one way to manage deer populations, and in parts of Massachusetts with hunting access, populations are stable; in more suburban areas, not enough deer are removed to stabilize the population. 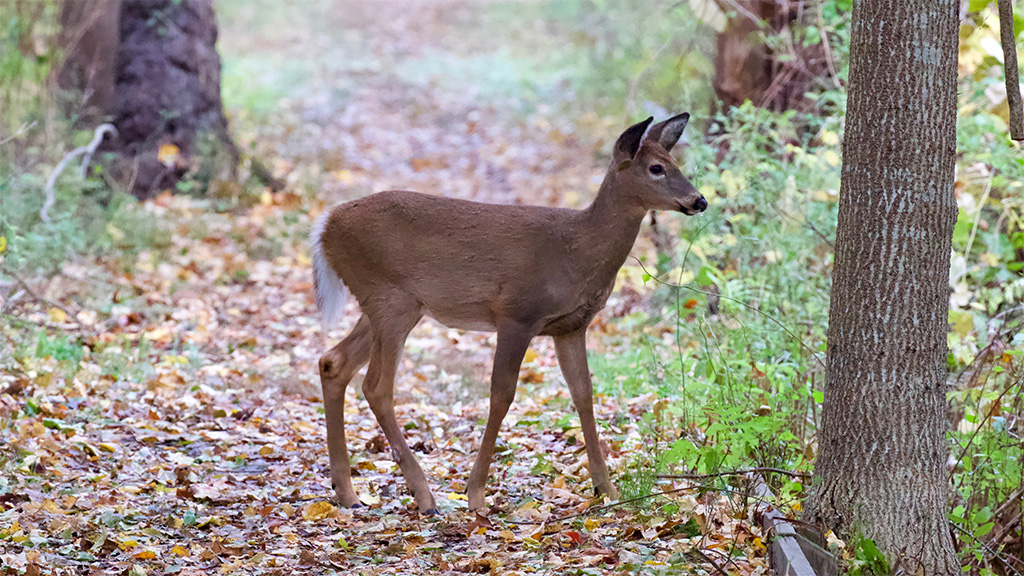 The white-tailed deer raises its tail when alarmed, displaying the white underside, which gives the deer its name. (Photo: Brian Rusnica)

Male and female white-tailed deer live in separate groups except during mating season. Mating in our area usually occurs from late October through early December. After mating, the females return to all-female groups. In May or June, the females typically give birth to twins. These fawns weigh about 6 pounds and have cream-colored spots on reddish brown fur; the spots camouflage them as they hide in the dappled sunlight of the forest floor. The mother leaves them to feed herself, returning to feed the fawns two or three times a day. Fawns have a unique scent that their mother can smell but predators can’t. Fawns also lie perfectly still, even when predators are nearby. Since most predators chase running prey, they do not notice what’s scentless and motionless. By the time they are 3 weeks old, young deer can outrun most predators.

Fawns stay with their mother until their second spring, when they are yearlings. When newer fawns are born, the yearlings go away and feed on their own, but return to their mother for the fall and winter. 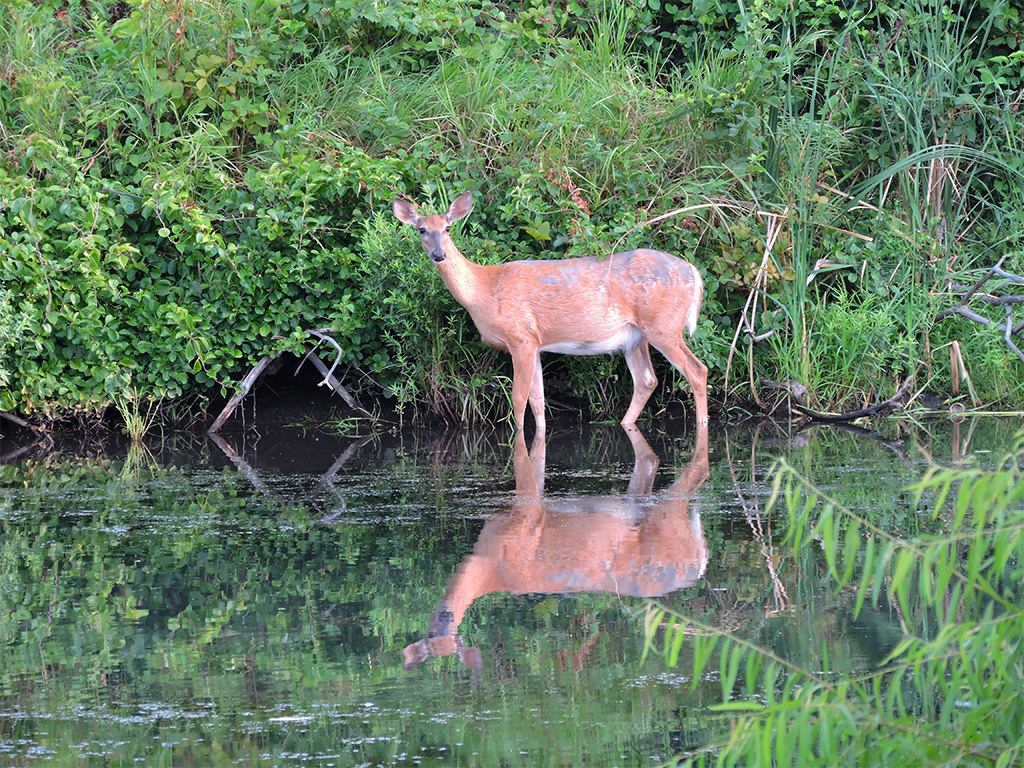 White tailed-deer are active at dawn and duck. They also tend to be more active at night than during the day. (Photo: Ann Schlesinger)

Deer eat plant material, including buds, leaves, shoots, berries, fruit, grain, nuts, bark and more – in other words, they are pretty indiscriminate and will eat many things. Like cows, deer are ruminates who chew their cuds (regurgitated, partially digested food). Their stomachs have four chambers, each with a different function: Food enters the first two chambers, where microbes partially digest it, and a deer finds a safe place to regurgitate and chew the food some more; the food is then swallowed a second time and enters the third and fourth chambers, where digestion finishes. This process allows deer to swallow large quantities of food quickly, then go somewhere safer to digest the food completely. 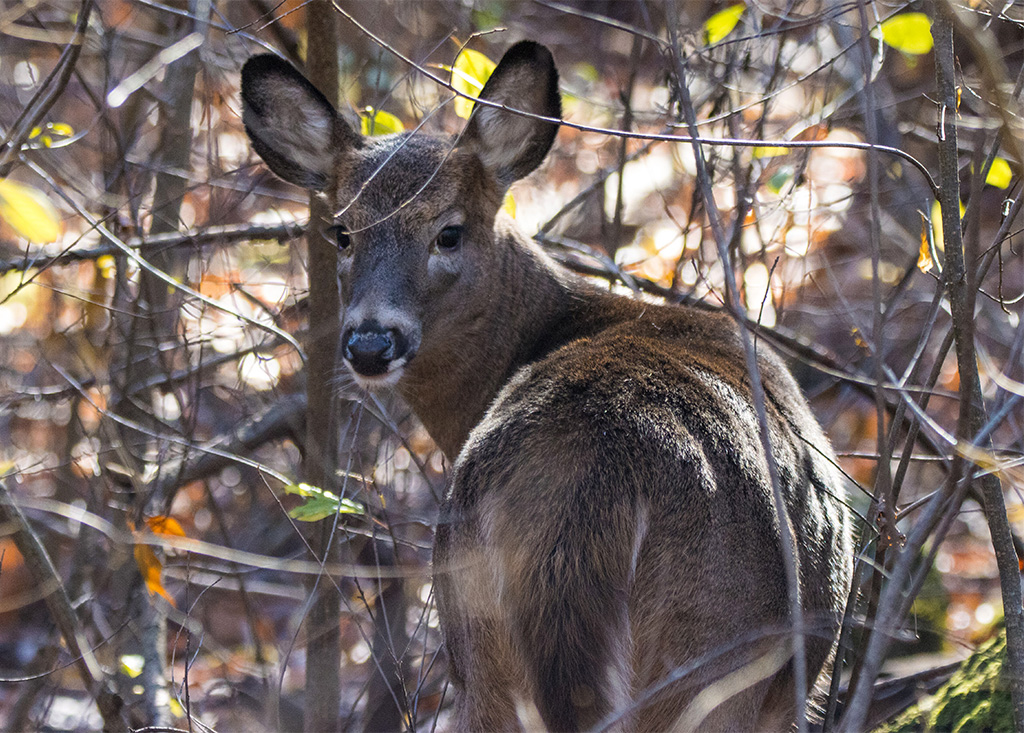 White-tailed deer belong to an order that includes other even-toed hoofed mammals such as pigs and cows, sheep and goats, giraffes and hippos. (Photo: Richard George)

Scientists consider white-tailed deer to be a keystone species, which means they have a direct impact on other plants and animals. White-tailed deer can increase biodiversity and encourage new plant growth. Researchers have found that deer waste adds nutrients to the soil, which encourages plant growth that increases the number of insects. These insects attract larger predators, such as salamanders, and salamanders attract still larger predators, such as snakes. In one study, scientists found three times as many red-backed salamanders in sites with deer than in those without. They also found five times as many snakes and 11 percent more snails. 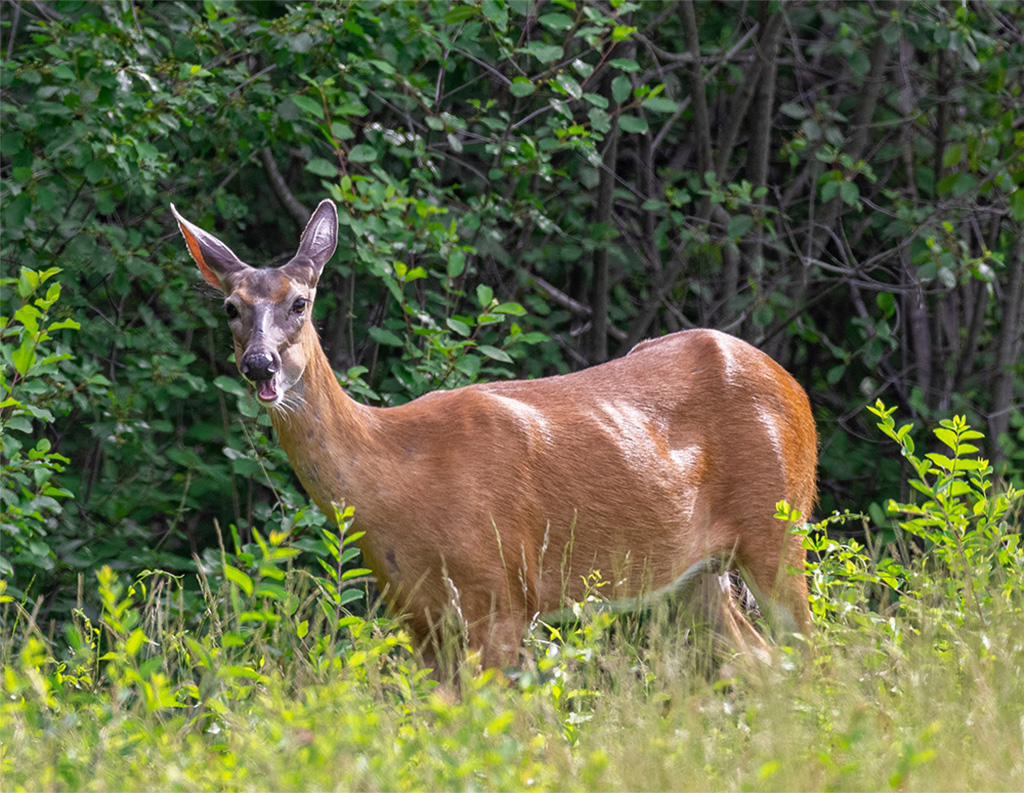 A white-tailed deer chomps away at a forest edge in Belmont. (Photo: Matt Sabourin/iNaturalist)

White-tailed deer are found throughout Massachusetts – even in forest edges of Cambridge and Boston. With a little bit of thoughtful management, we can live in harmony with them, which would be to everyone’s benefit. 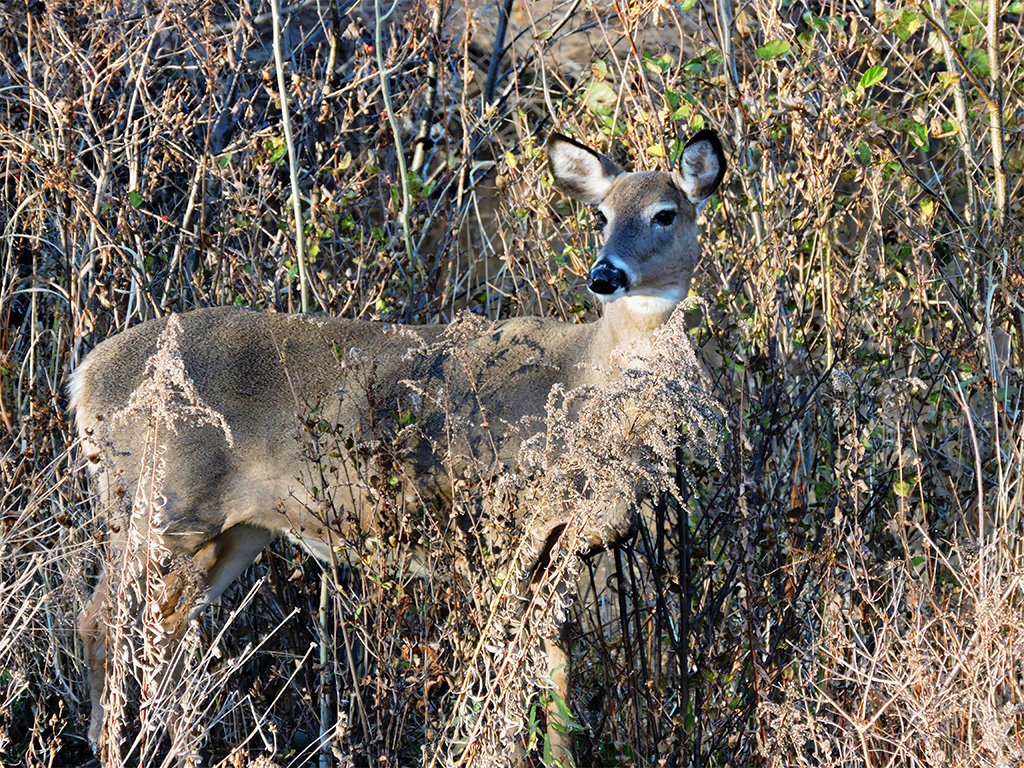 During the summer, white-tailed deer are reddish brown, but in the winter their coat becomes grayish brown. (Photo: Ann Schlesinger)