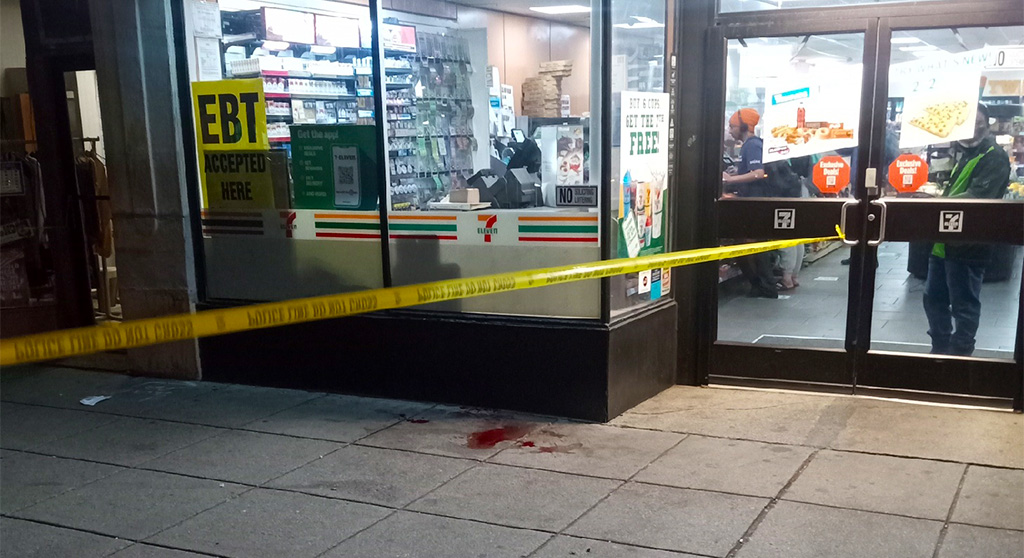 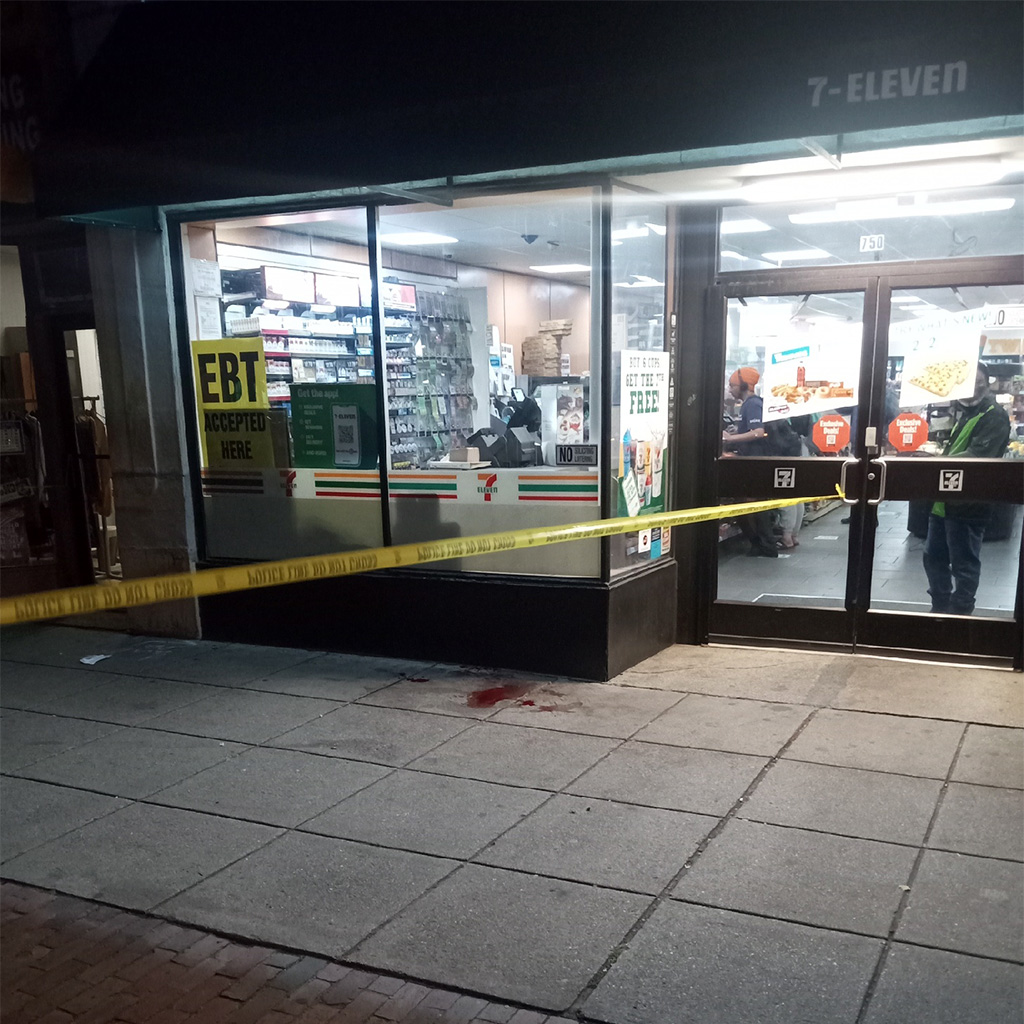 The aftermath of a stabbing victim being rushed to a hospital is seen late Sunday at a Central Square 7-Eleven.

Two Sunday stabbing victims remain in the hospital, police say, one now in stable condition and the other still in critical condition – maybe because that man was in two separate stabbing incidents within one day.

In the first case, police found the man at a Cambridge hospital with stab wounds at around 4:40 a.m. Sunday after he arrived at the emergency room. “He was not cooperative with us and did not tell us where it took place or when it took place. But he was obviously stabbed,” said Jeremy Warnick, director of communications and media relations for Cambridge police, in a Monday call.

The first time he was stabbed was after a 4 a.m. Sunday fight at Massachusetts Avenue and Pleasant Street in Central Square – near the 7-Eleven at 750 Massachusetts Ave. that’s across the  intersection from City Hall. The next time he was with a friend, but that didn’t keep him safe. He was stabbed the second time when they encountered two or three men at McElroy Park, at Western Avenue and Franklin Street, in Riverside just south of Central Square, and the friend was stabbed when he tried to prevent it.

After the 8 p.m. stabbing in the park, one of the victims made it all the way back to the 7-Eleven at 750 Massachusetts Ave., coincidentally the scene of the 4 a.m. stabbing. He first tried to get into the nearby Cantab Lounge, where he was turned away, said one person on the scene.  The other victim made it only a block north from the park, to 5 Western Ave., which houses the Community Learning Center, before being found and then taken to a hospital by first responders.

People who spoke with police said two or three possible suspects were seen running in the opposite direction toward River Street after the stabbings, police said. No arrests have been made as of Monday afternoon. An investigation remains ongoing, police said.

When police were seen at 8 a.m. Sunday in front of the Walgreens at 625 Massachusetts Ave., that was for cleanup from the violence that happened two blocks west a few hours earlier. “We did locate trails of blood – we believe he was stabbed in one location and ended up moving to a different location,” Warnick said. “It looks [the Department of Public Works] was probably trying to clean up the blood on the sidewalks.”

The stabbing victims are both in their 20s; whether they are homeless is “a little bit of a gray area,” as both have addresses where they stay but spend more time on the streets, Warnick said.

Each had multiple stab wounds. For the man stabbed a second time, it was “more severe” at 8 p.m. than when first stabbed at 4 a.m., Warnick said,

Though the man who was stabbed twice was able to walk away from the first incident quickly, “it’s going to be a little bit of a longer recovery this time around. But the prognosis is better than initially expected,” Warnick said. “We need a lot more cooperation from this person, because clearly they’ve been targeted by someone.”

Lastly, firefighters responded to handle a medical call at the Frank J. Manning public housing apartments at 237 Franklin St. late Sunday. A resident believed it was a stabbing in the building’s front plaza that left a man with a hand injury – part of ongoing issues with unhoused people who occupy it – but Warnick said it was not reported as a knife incident.