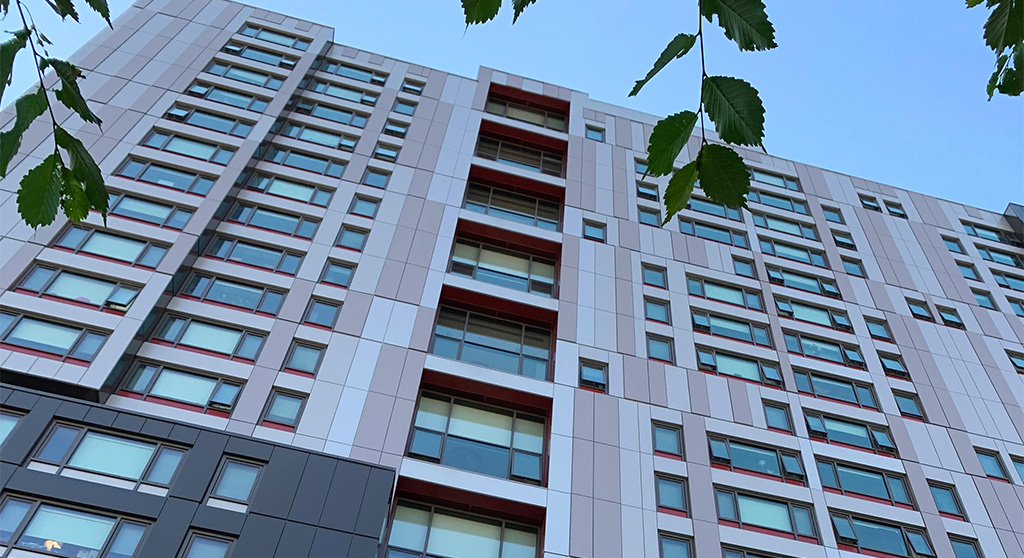 By Nicholas Miller and Marc Levy 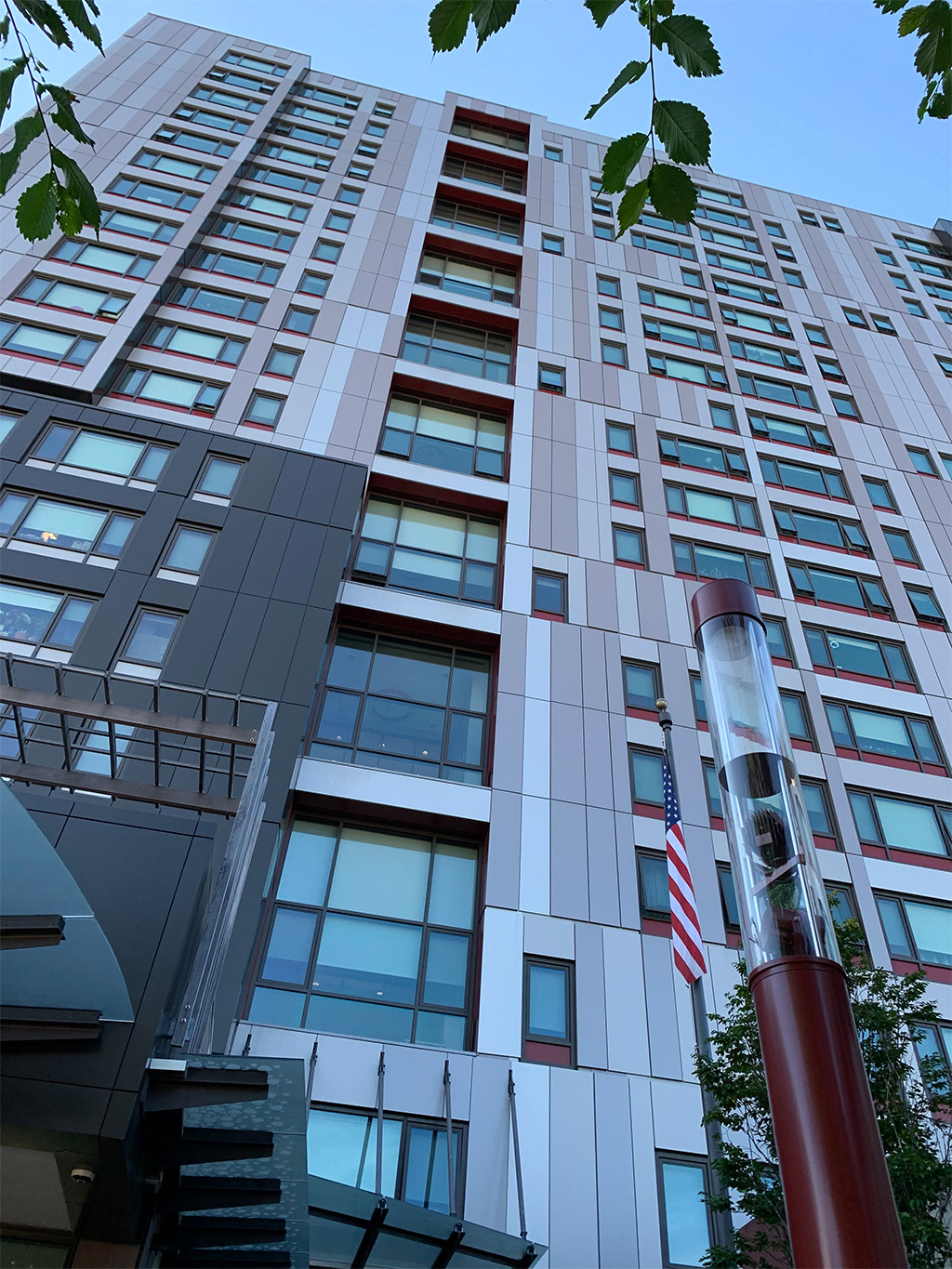 Some residents of Manning Apartments, a public housing complex near Central Square for seniors and people with disabilities, say they feel unsafe amid a spike in illegal activity in and around the building – and an official at the Cambridge Housing Authority said Friday that an attempt to address the problem better with private security has suffered a setback.

The activity has invaded the building as well, Motes said, with strangers – many with knives and once with a gun – coming in through frequently broken doors or following in residents. Building residents have encountered trash, blood and urine on floors in public areas inside from people who enter from the plaza. Sometimes they come in to sleep in a stairwell, sometimes to buy drugs from apartments within the building, as dealers who don’t live in Manning have nonetheless set up shop inside.

A resident who asked to be identified as Bernadette said she recently went to throw away her trash and found someone smoking crack in the trash room. 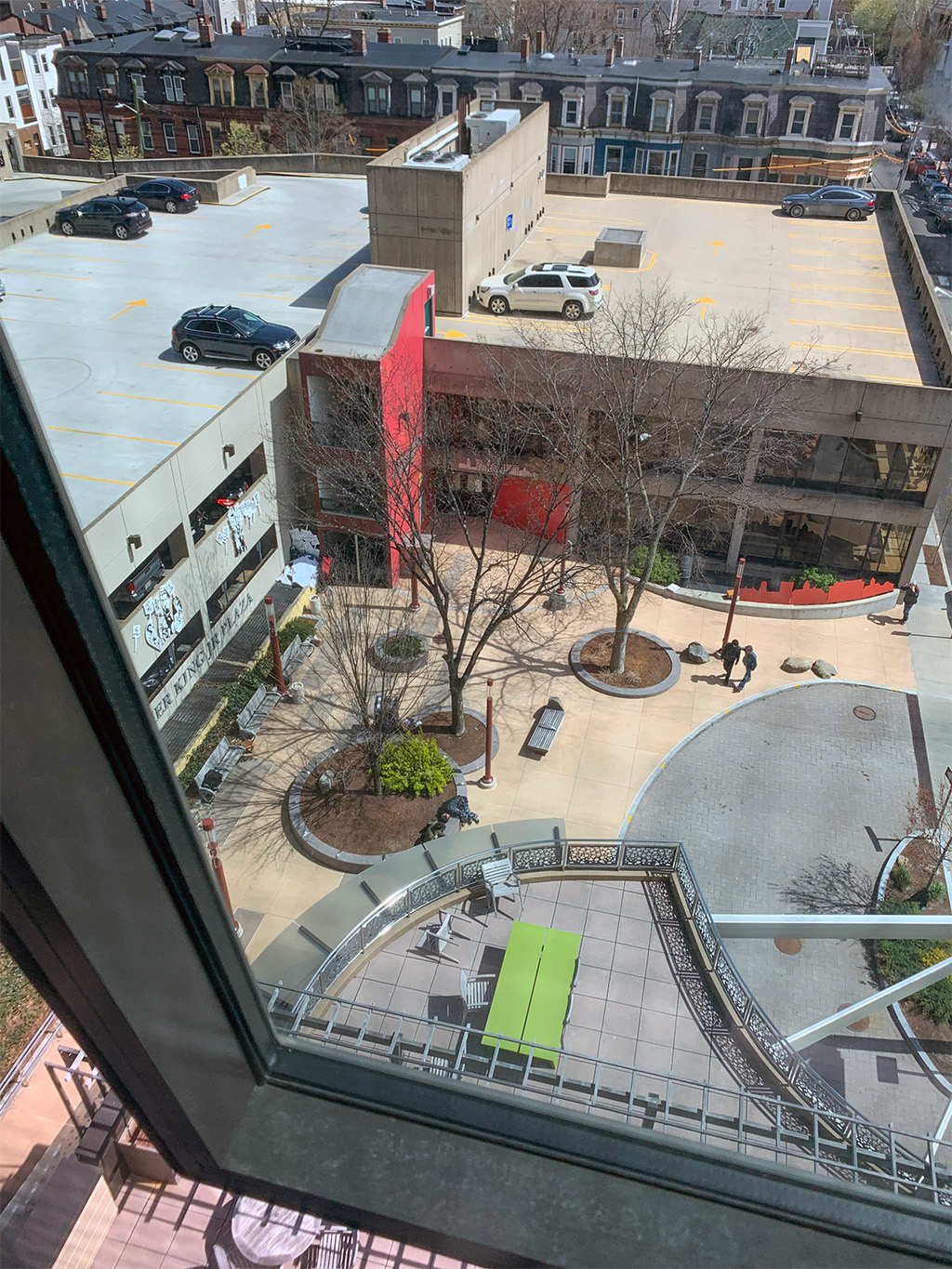 The Manning Apartments share Martin Luther King Jr. Plaza with a library branch. In this April 21 photo, a man is asleep or passed out on a planter. (Photo: Tyler Motes)

A fellow resident who asked to remain anonymous for fear of retribution said she has been the target of repeated verbal abuse, with someone telling her, “Give me a cigarette, you don’t have a choice,” and one person threatening that they would “go get his gun and come back.”

As recently as a year ago, the Cambridge Housing Authority’s 19-story Frank J. Manning Apartments tower – at 237 Franklin St., it is neighbors with the Central Square Branch of the Cambridge Public Library – felt safe enough for residents to sit out in the courtyard for long periods, Motes said. Now, people are too afraid.

“This is not good for my anxiety,” Bernadette said. 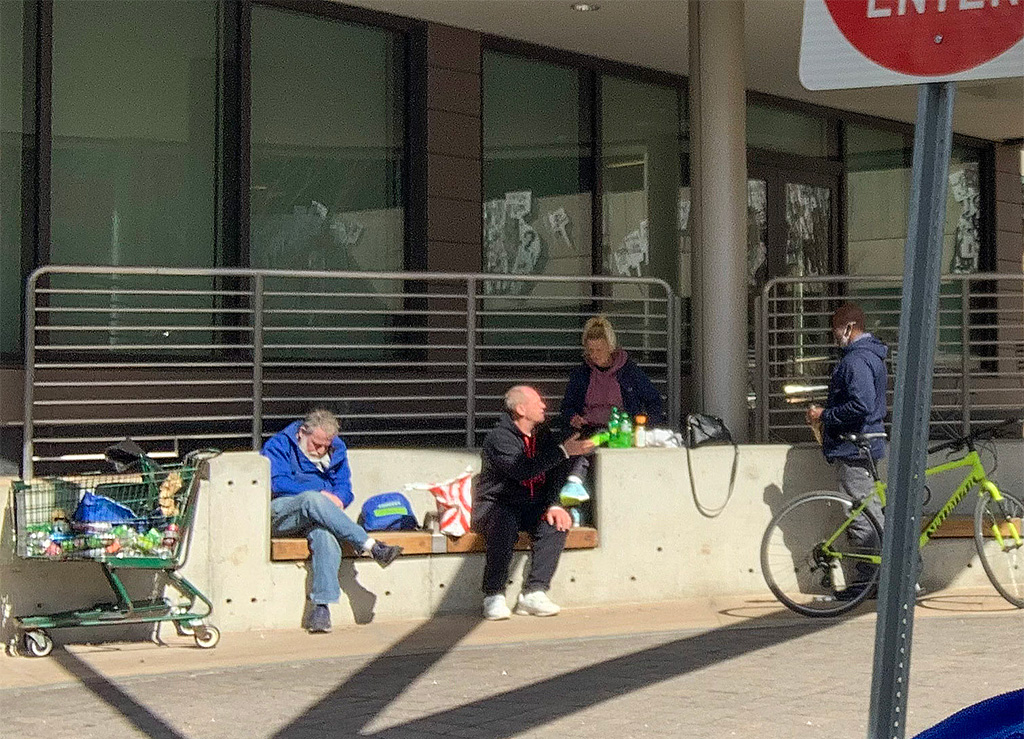 The Cambridge Housing Authority first hired a security company to help keep unwanted visitors from entering Manning in late 2019. (The Millers River and LBJ buildings in East Cambridge and Cambridgeport also have private security.) A cleanup of the plaza that was meant to make it more family-friendly instead attracted homeless people.

The situation worsened with last year’s closing of the “Mass and Cass” homeless encampment in Boston, also known as “Methadone Mile,” when many of its regulars came to Cambridge, Motes said. 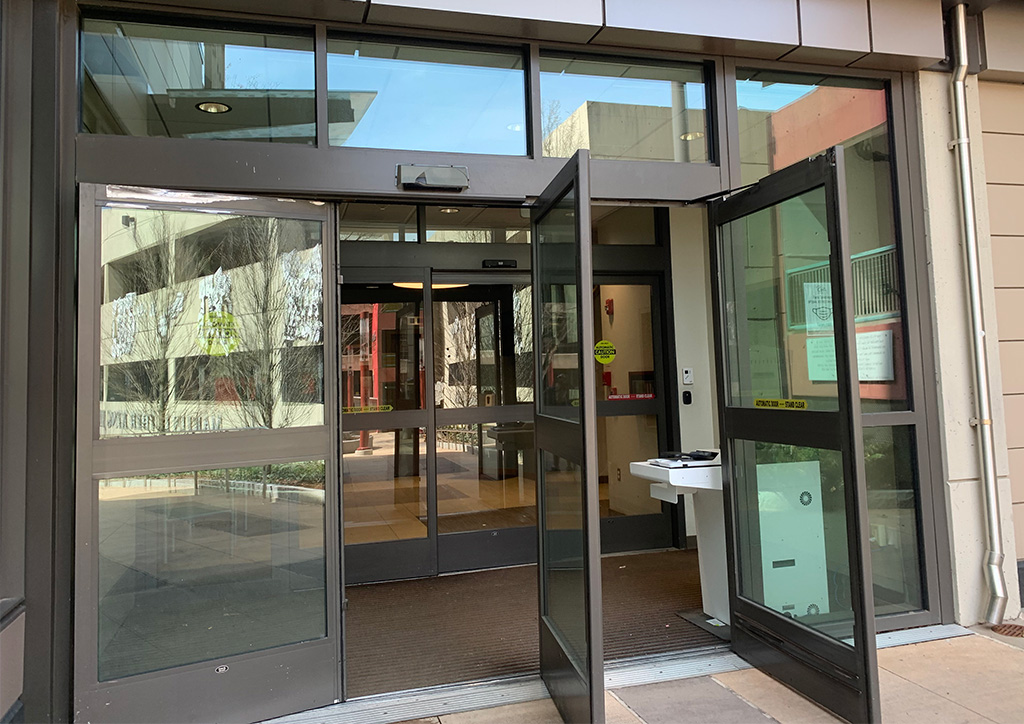 The doors between Manning and the plaza are often broken, allowing access to the homeless and others, residents say. (Photo: Tyler Motes)

While Michael Johnston, executive director of the Cambridge Housing Authority, said there’s “no denying” an increased homeless presence, he believes the growth began before the forced exodus from Boston, and for a more basic reason: “I’ve got 21,000 people on my waiting list. Many of them homeless, doubled up, couch-surfing, desperate just even to get [a single-room occupancy] unit, let alone an apartment. There’s just not enough affordable housing.”

People are also drawn by the extensive services provided by the city to unhoused people and drug users, particularly around Central Square, the anonymous Manning resident said. She said she’s not in favor of cutting the services, but that the city needs to ensure they don’t cause suffering among residents.

Not just the plaza 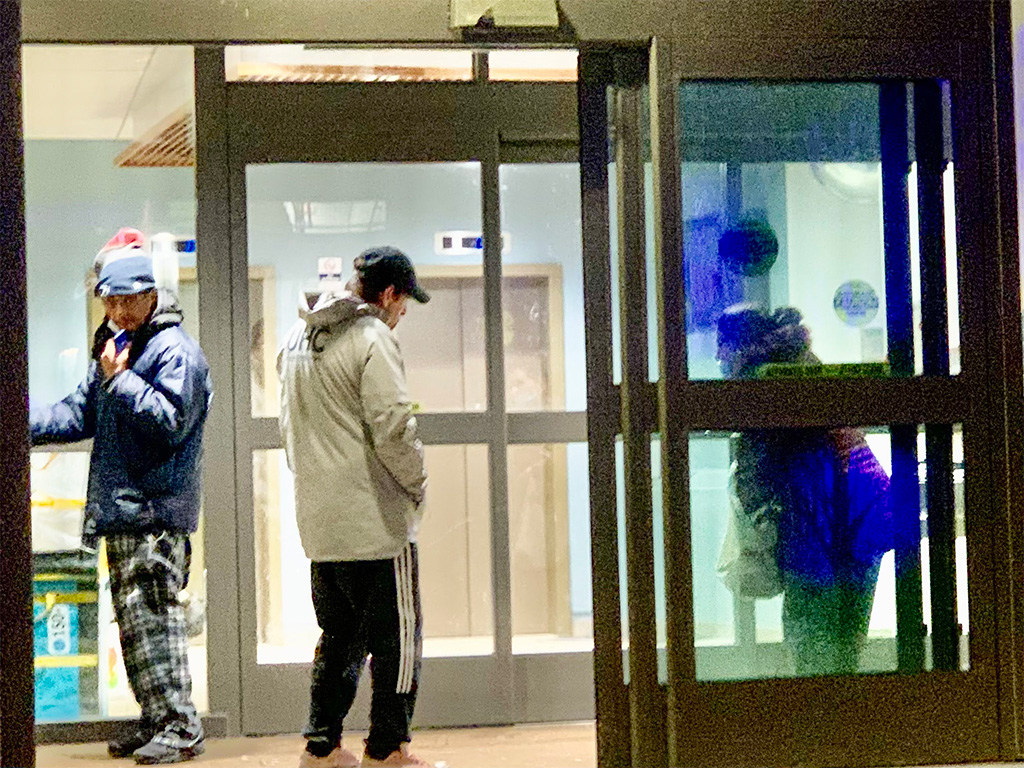 City councillor Marc McGovern, a social worker by training, called it “a chicken or the egg” problem in which “you want the services where people can access them, but by putting the services in a particular neighborhood, people who use those services are going to be in that neighborhood.”

He said he “respects that it can be scary for some folks,” but described the situation as complicated, given that people have the right to congregate in public areas such as the courtyard. Johnston agrees that police are doing what they can, given those limitations. “We can’t just go in and kick everybody out” of a public plaza, Johnston said.

But those unhoused people don’t stay out on the plaza; they come in. And amid a city and statewide move away from prosecuting drug use, Motes said police officers have told him that their instructions are not to rely on arrests of the drug users or trespassers. 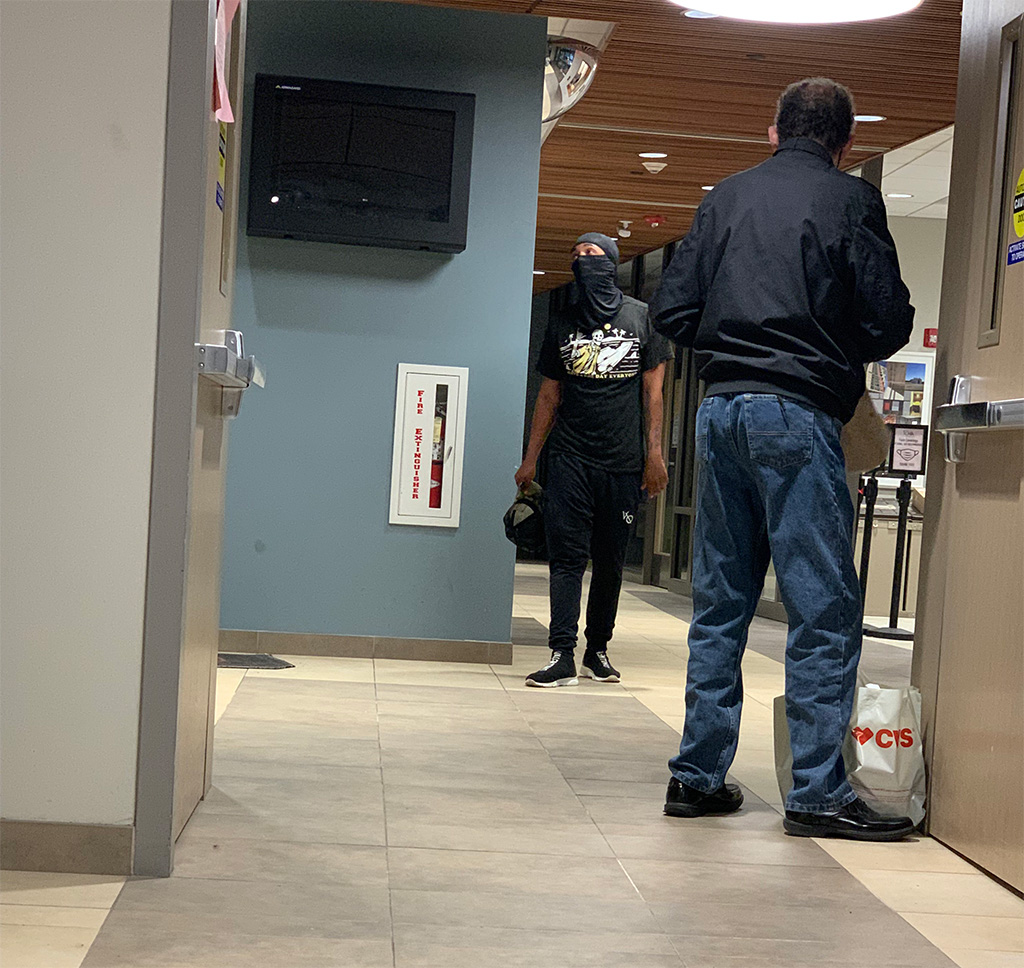 A nonresident inside Manning – whom residents say still manages to deal drugs from inside the building. (Photo: Tyler Motes)

Meanwhile, the building’s private security, provided by the housing authority, has been wholly insufficient, Motes said. Though 1st Armor Protection Services is contracted to watch the building, which has a security guard present daily from 7 p.m. to 3 a.m., Motes said the security guards have done little recently to remove people from the building or courtyard and have sometimes not required entrants to sign in – a building rule.

The anonymous resident said she is hoping the city will institute 24-hour security and issue IDs that must be shown to a guard before entrance to the building is allowed.

Yet on some nights, no security guard has shown up at all, Motes said.

Residents have taken to social media to alert officials to the problem and won a meeting in May about their complaints, but Motes said the response was focused on addressing the mental health issues of some of the trespassers rather than improving security.

Since that meeting, the police department has increased its “visibility” of the area, said Jeremy Warnick, director of communications for the Cambridge Police Department, in an email. Officers have been directed to the area in front of Manning Apartments “at specific points in the day and night with an emphasis on times in which there have been reports of concerning activity,” Warnick wrote.

Johnston responded too, calling a meeting with 1st Armor – a company brought in a year ago after MDS Protection Services guards hired by the CHA drew complaints of literally sleeping on the job. On Friday, he heard back with the answer from a May 16 meeting in which managers “had a frank conversation” and went through a list of complaints. “They told me that they will get back to me by the end of this week on things that they could do and things that they can’t,” Johnston said.

Instead, the CHA learned Friday that 1st Armor will withdraw from Cambridge public housing when its contract ends in July 2023, Johnston said. The authority will have to issue a new call for companies who can take over the job – and hopefully do better.

The 24-hour security that some residents ask for is impossible within the agency’s budget, Johnston said. And ID checks may be wanted by some, but not all.

On Friday, Motes arrived to find the doors to the plaza broken again, allowing access to people from the plaza, and firefighters who’d been called to the scene to deal with drug needles and syringes found between Manning and the library.

Additional help may come from a social worker placed recently at the library branch whom McGovern expects to get “more involved.”

“Hopefully we can provide an environment where people will be safe but also where people can congregate and not infringe on anybody’s rights,” McGovern said.