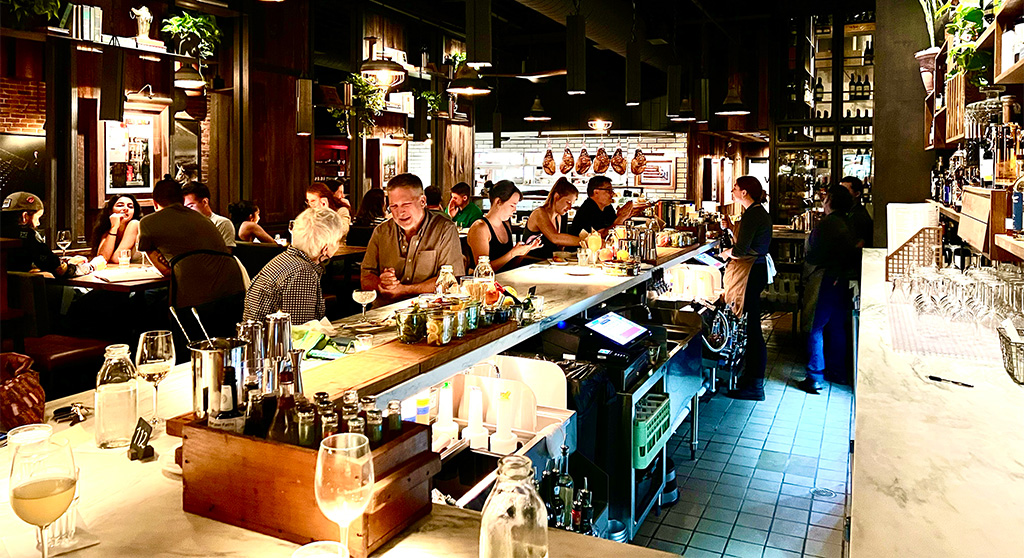 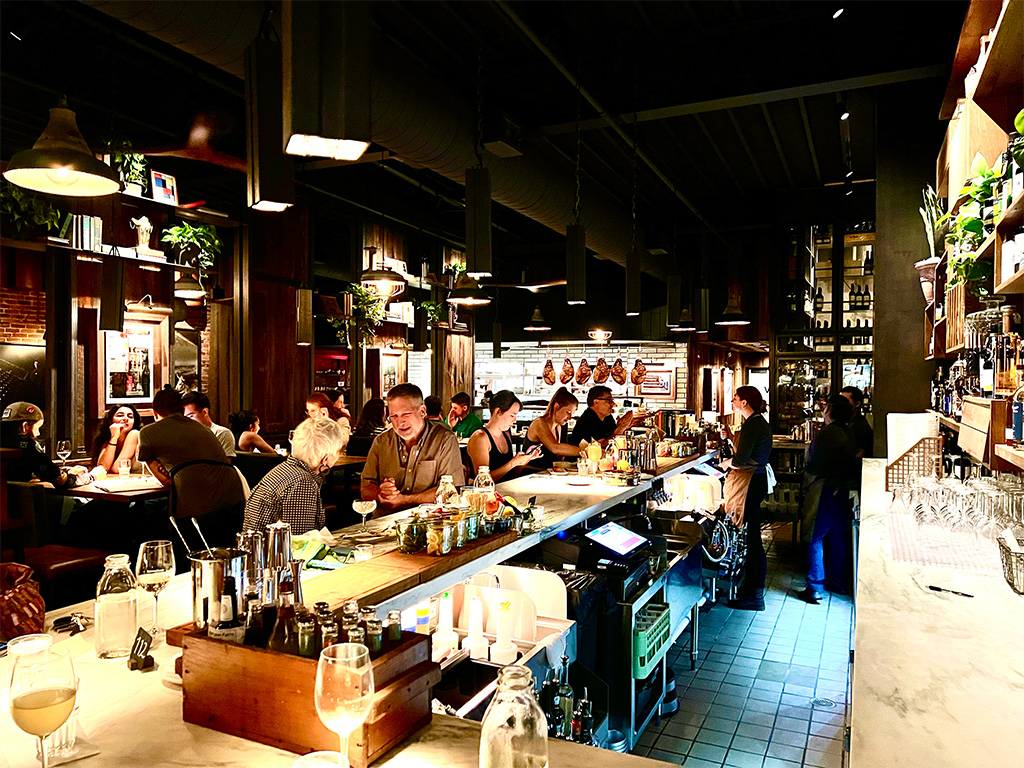 Who knew a chain entry could be a quaint neighborhood spot? Sounds unlikely, but it’s so with the opening of a Barcelona Wine Bar last week where Temple Bar was for nearly 20 years – and let’s not forget about Nick’s Beef and Beer House before that, where gruff service was a selling point and cheesy, plastic fire logs hung lit on the walls. Barcelona is a long way from Nick’s.

The chain began in Connecticut back in the 1990s and has 20 locations, mostly on the East Coast (the three in the Boston area include this spot, the South End and Brookline) but with one outpost in Denver. The Cambridge location is dark, warm and inviting, with an impressive marble bar top, that, despite my early skepticism, is a worthy replacement for the long, majestic metal one that came to define Temple Bar. Ham hocks hang above a slightly open kitchen window at the back of the restaurant.

As you can likely gather by the name, Barcelona’s thing is wine and tapas. A cool addition – and I do mean cool, as in perfect for these dog days of summer – is a gin and tonics section on the drinks menu, with a slight variation on the summertime classic that has perfectly carbonated tonic (never flat, never super fizzy) with subtle accents such as ginger garnishes that work perfectly with the lime to make the drink even more refreshing and light. The wine menu is vast, but there’s no need to feel overwhelmed; tell the folks behind the bar your preferences and they’ll give you a taste or two, most always nailing it. 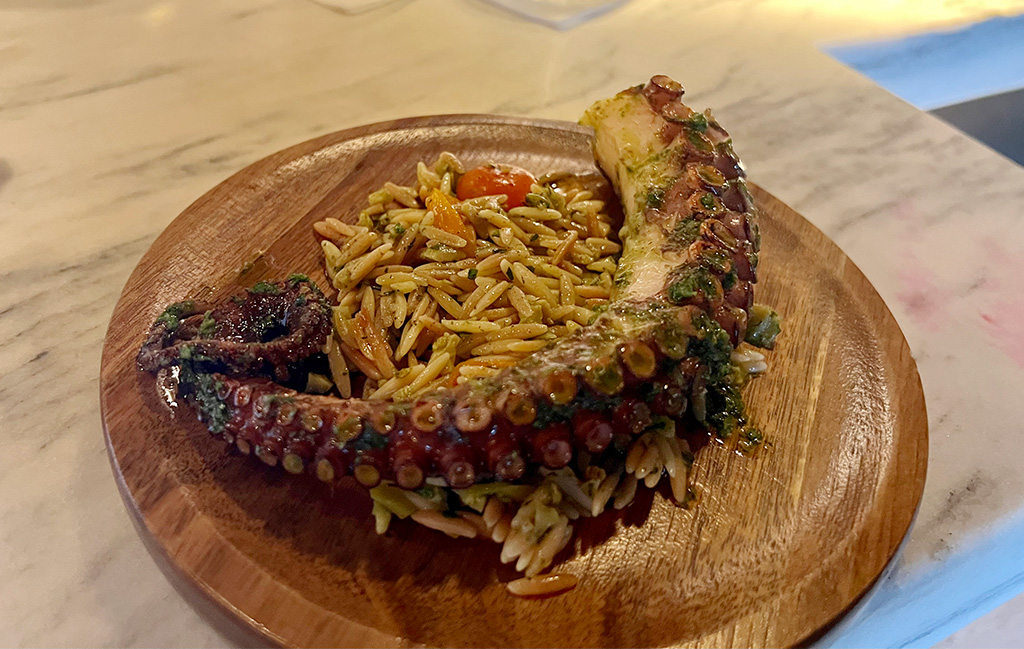 The food menu too feels almost too big to navigate, but it’s no boondoggle – more a boon, to be sure. The small plates start with a vast array of cheese and charcuterie you can mix and match. On the tapas slate, I cannot stress enough how satiating and wonderful the potato tortilla is. Sure, it’s just potato au gratin in a pie sliver form, and probably the most inexpensive thing on the menu, but if you love cheese and savory things, this is your new Eden. The Grilled Pulpo (octopus) is tender and perfectly cooked and comes atop a rich bed of dark orzo similar to a wild rice or rice pilaf. Try the fried okra that comes out as long dippables (like fried zucchini sticks, versus the usual nugget versions of okra) with a spicy Peruvian aji verde sauce. Other things on the menu that call for future sampling are the Truffled Bikini ham and cheese finger sandwiches, smoked bluefish pate and a burrata with peach mermalada (marmalade or jam) and Aleppo pepper.

There’s a big plates section with shareable paellas served in the pan they’re cooked in, with the rice crisped delightfully on the bottom like a Korean dolsot bibimbap. (I got a small veggie portion that looked pretty sizable to me, but there are two bigger sizes; the large could serve a party of four or more.) A whole grilled branzino is listed, and a carnivore’s delight of Parillada Barcelona (grilled steak, chicken and chorizo with paired sauces). The signature Chicken Pimentos is a spicy, deboned half-chicken with potato slices and crisp skin, making this stretch of Massachusetts Avenue the place to go for savory half-chicken preparation, considering equally pleasing spins by Colette and Gustazo. 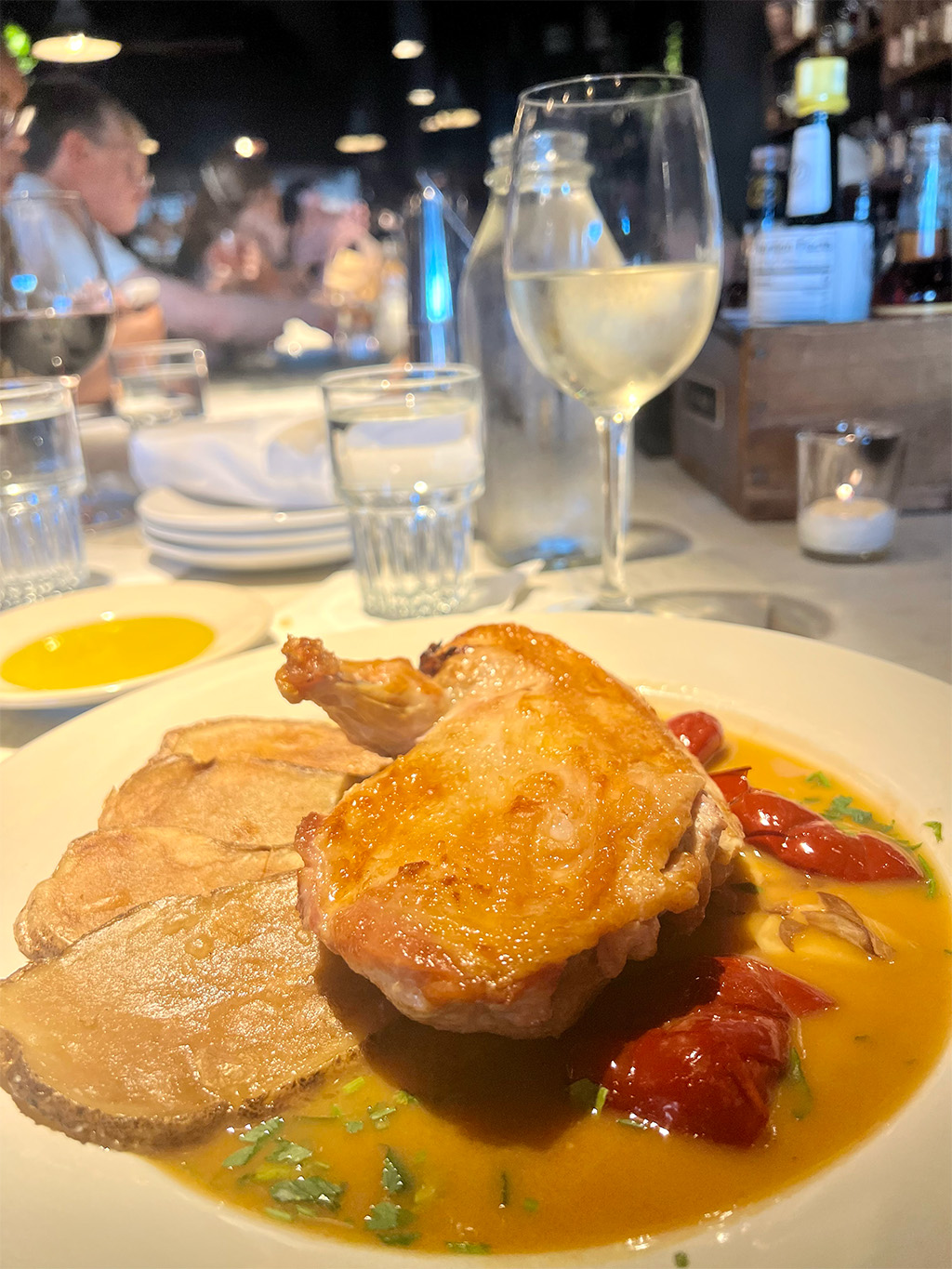 Service is attentive, but know that many of the friendly faces were brought in from other Barcelonas to help get the Cambridge locale up and off the ground soundly and seamlessly. They will depart soon, turning your culinary care over to their local counterparts. It’s a neat, smart way to boot up an eatery to help ensure success.

Like Moëca, another recent opening that’s just around the corner, Barcelona has both a destination and neighborhood vibe to it, as well as a menu that’s a bounty of unique flavors and textures that’ll have you coming back to sample. (The menu changes some; what was a halibut verde small plate one night is now swordfish.) The pandemic really hurt the dining experience on the avenue between Harvard and Porter squares; gone are Luce, the Newtowne Grill, Mix-it and Temple Bar, and Christopher’s has yet to reopen. But the additions of Dear Annie, Moëca and Barcelona, with Season to Taste coming, help ease the bitter with savory mouthfuls and renewed neighborhood vibrance.