Scares from ‘Scream’ to the creepy new ‘Smile,’ but also the romance of ‘Bros’ and ‘I’ll Find You’ 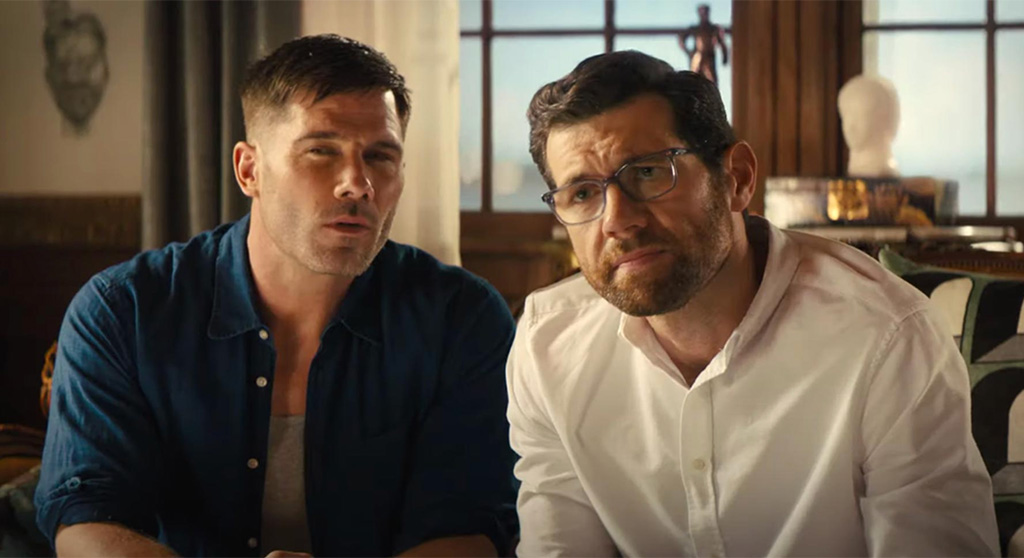 Scares from ‘Scream’ to the creepy new ‘Smile,’ but also the romance of ‘Bros’ and ‘I’ll Find You’

The Brattle Theatre’s Halloween-inspired “Vampires in the Arthouse” program continues this week with a Wednesday screening of Bill Gunn’s 1973 cult classic, “Ganja & Hess,” starring Duane Jones (“Night of the Living Dead”) as an anthropologist made immortal and imbued with a blood thirst after being stabbed with a relic. There are also screenings of Tomas Alfredson’s chilling “Let the Right One In” (2008) on Tuesday and its Persian spin, Ana Lily Amirpour’s “A Girl Walks Home Alone at Night” (2014), on Thursday, and the Brattle has the area premiere of Amirpour’s chilling but non-vampiric “Mona Lisa and the Blood Moon” (2021) starring Craig Robinson of “Friday” and Kate Hudson of “Almost Famous” in a run starting Friday.

The Brattle moves on to celebrate actor Ruby Dee at 100. Dee is most known for her part in the race-barrier-challenging “A Raisin in the Sun” (1961) and Spike Lee’s explosive “Do the Right Thing” (1989). This week’s centennial birthday slate adds “Uptight” (1968), based on the 1935 classic “The Informer” and directed by Jules Dassin (of the great safe heist, “Rififi”), which follows Black revolutionaries betrayed by one of their own. Dassin and Dee share script credits. The film plays Friday and Sunday; the Friday screening is packaged with the little-seen “The Incident” (1967), co-starring Beau Bridges, Brock Peters (“To Kill a Mockingbird”) and Martin Sheen as subway riders trapped and terrorized by hoodlums who divide them by race and other segregations. On Saturday and Sunday it’s “St Louis Blues” (1958) with Dee opposite jazz giants Cab Calloway, Eartha Kitt, Ella Fitzgerald and Nat King Cole. Saturday also packs in “Raisin,” the Lorraine Hansberry play co-starring a young Sidney Poitier, and the western “Buck and the Preacher” (1972, Poitier’s directorial debut) with Harry Belafonte. Dee, who died in 2014, wasn’t nominated for an Academy Award until 2007 when she played Denzel Washington and Chiwetel Ejiofor’s mother in “American Gangster,” helmed by veteran Ridley Scott. “Gangster” plays Sunday. (Tom Meek)

The Harvard Film Archive series “The Face of Time … The Recent Films of Tsai Ming-liang” continues with screenings of the director’s “Walker” series shorts “Walker” (2012) and “No No Sleep” (2015) on Monday and his 2018 feature “Your Face,” about 13 subjects changed by time and events, on Oct. 9, preceded by the 2019 short, “Light.” Also this week the HFA launches its “The Return of João Pedro Rodrigues and João Rui Guerra da Mata” program celebrating the two Portuguese filmmakers with Rodrigues’ “Will-o’-the-Wisp” (2022), a musical about the romance between two firefighters on Friday and “Where Is This Street? or, With No Before and After” (2022) directed by Mata and Rodrigues on Saturday. The film is paired with Paulo Rocha’s influential and newly restored classic “The Green Years” (1963). Mata and Rodrigues will be on hand to discuss their collaboration. (Tom Meek)

Cool fall air means ghosts and goblins and all things Halloween-ie are nigh. To get you in the mood, repertory programming at the Somerville Theater leans its lens toward the ghoulish and scary, beginning with Wes Craven’s devilish and witty “Scream” (1996), a deconstructive reimagining of the classic slasher flick chock full of nubile bodies and gotcha red herrings. It screens Saturday. The film’s success spurred a franchise with diminishing returns; in case you were sleeping, there was a 2022 “Scream” reboot that brought back Neve Campbell, Skeet Ulrich, Courteney Cox and David Arquette to pass on the baton. (Tom Meek)

Keeping with seasonal spooks and chills, the Retro Replay series at the Landmark Kendall Square Cinema kicks in to Halloween mode for October with an “’80s Frights” series. Up Tuesday is a 35th-year celebration of Joel Schumacher’s “The Lost Boys” (1987), in which vampirism, spiked hair and a pair of Coreys rule the night. Others on the program include David Bowie and Catherine Deneuve in “The Hunger” (1983), James Woods and Debrah Harry in David Cronenberg’s snuff-horror film “Videodrome” (also 1983) and Stanley Kubrick’s “The Shinning” (1980). (Tom Meek)

The heyday of gay rom-coms seemed to be the late 1990s with the likes of “Jeffrey” (1995) and “The Broken Hearts Club: A Romantic Comedy” (2000), but with “Fire Island” and this shaggy-dog, Mutt-and-Jeff love story set in Manhattan and P-town, it seems to be back. More to the point, the gay parts are mostly performed by gay actors, and part of the witty skewering by writer-actor Billy Eichner (an “Angry Birds” voice actor who gets to use that talent before the lens) is of A-lister straights playing gay cowboys in “Brokeback Mountain” (2005) and “The Power of the Dog” (2021). Eichner’s Bobby is a New York nebbish to the nth degree (think Woody Allen), while Aaron (Luke Macfarlane) is a ripped, shirtless-in-the-clubs Adonis. In the age of Grindr, opposites attract, especially when they’re commitment shy, sexually open and like to play the field, and Bobby and Aaron keep gravitating back into each other’s orbit. For a third or fourth date, they go to a “gender reveal orgy.” The film’s got some of the teeth of Gregg Araki (“Mysterious Skin,” “The Living End”), and more bite is added by asides about opening an LGBTQ museum, Hallmark TV knockoffs of polyamorous and bi holiday specials and the notion that Lincoln was perhaps bi. There are also cheeky cameos by Amy Schumer, Ben Stiller and Debra Messing as her gay-icon self. (Tom Meek) At Apple Cinemas Cambridge, 168 Alewife Brook Parkway, Cambridge Highlands near Alewife and Fresh Pond; Somerville Theatre, 55 Davis Square; and AMC Assembly Row 12, 395 Artisan Way, Assembly Square, Somerville.

Dr. Rose Cotter (Sosie Bacon) starts to fall apart after she witnesses a violent and unsettling suicide. In the discontented aftermath we begin to wonder if she’s suffering from trauma-induced psychosis, or if perhaps there’s something more malevolent targeting her. Parker Finn’s feature debut is an expansion of his 2020 short “Laura Hasn’t Slept.” Finn’s take is that true horror is rooted in real life and examines how trauma makes people vulnerable. While some may say the concept is too similar to “It Follows” (2014) or “The Ring” (2002), “Smile” works on its own terms immersed with Cotter, wound too tight and with people closest to her turning superficial and nonreciprocating; the care and support she shows them and others is unavailable to her. Bacon’s performance is career-turn-worthy, and watching Cotter unravel frame by frame is heartbreaking. For additional effect, Finn uses the camera like a random, curious unseen character. Reminiscent of the opening of “Devil” (2010) or Killmonger entering the throne room in “Black Panther” (2018), the POV becomes offsetting, counterintuitive and upside-down to reflect Cotter’s state of mind. It may not be fresh, but “Smile” is a valid refresher. (Sarah Vincent) At Apple Cinemas Cambridge, 168 Alewife Brook Parkway, Cambridge Highlands near Alewife and Fresh Pond, and AMC Assembly Row 12, 395 Artisan Way, Assembly Square, Somerville.

It’s been a while since we’ve seen work from groundbreaking director Martha Coolidge (“Introducing Dorothy Dandridge,” “Valley Girl,” “Rambling Rose”) up on the big screen. Her latest is a romantic, musical odyssey set against World War II and the Holocaust. A big canvas to be sure, and one lushly and intricately rendered. At the core are violinists Rachel Rubin (Adelaide Clemens, “The Great Gatsby”) and Robert Pulaski (Leo Suter), who meet as children attending a prestigious music school in Poland and over the years form a bond and romantic feelings. But as a young woman Rachel is betrothed to another – and she’s Jewish and Robert’s Catholic. Neither barrier is too much for Robert. He doesn’t give up even after Hitler invades (the film’s a saga akin to “Dr. Zhivago,” so there are hops to opera houses in Italy and elsewhere) and Rachel is taken to a concentration camp. He uses his talents and connections to perform before Nazi officers to try to gain favor and information on Rachel and hopefully free her. Clemens and Suter forge their lovers’ timeless bond well, and the supporting cast of Connie Nielsen and Stellan Skarsgård as musical mentors puts a neat bow on the project. Given the film’s polished presentation, it curious that it’s sat on the shelf this long. (Tom Meek) On Hoopla and available for rent and purchase online.