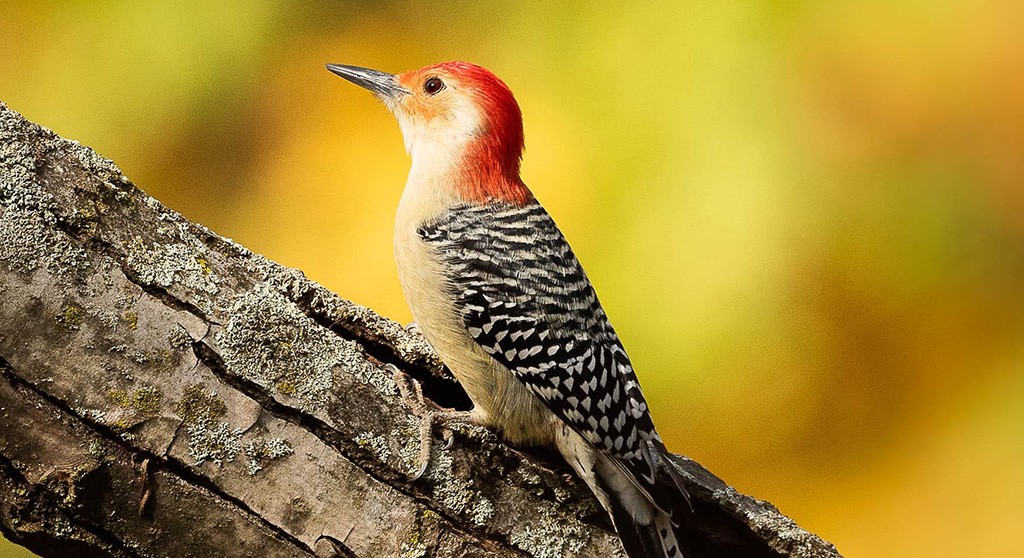 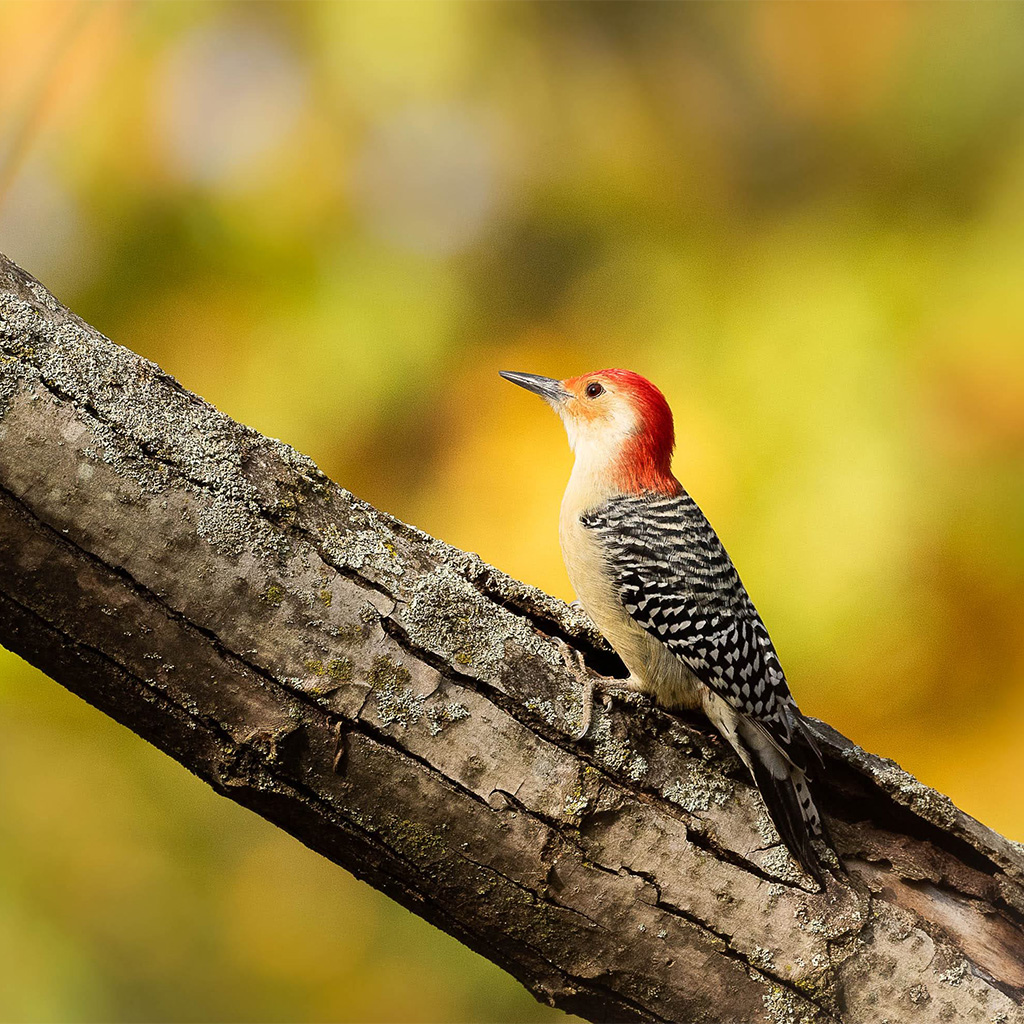 Male red-bellied woodpeckers have red from the top of their head to the back of the neck. (Photo: Kim Starbuck/Fresh Pond Feathers)

Despite its name, the red-bellied woodpecker (Melanerpes carolinus) has only a tinge of red on its belly. Males do have, however, a red head and neck. Females have a patch of red on the back of the neck and above the bill. It’s a fairly large bird, about 9 inches in length, and it is becoming more and more common in Massachusetts as the bird expands its range northward. Red-bellied woodpeckers moved into New York in the 1960s and made their way north into Connecticut by 1971. Observers recorded the first breeding pair in Massachusetts in 1977. These birds visit bird feeders in the winter, so that is a common place to see them this time of year, but you can also spot them at Fresh Pond and in other local habitats.

Male red-bellied woodpeckers stay year-round near their nesting territory, but the females set up a separate winter territory. This is a noisy bird that makes quite a few sounds, including a cherr-cherr-cherr. The birds also drum on trees to communicate. 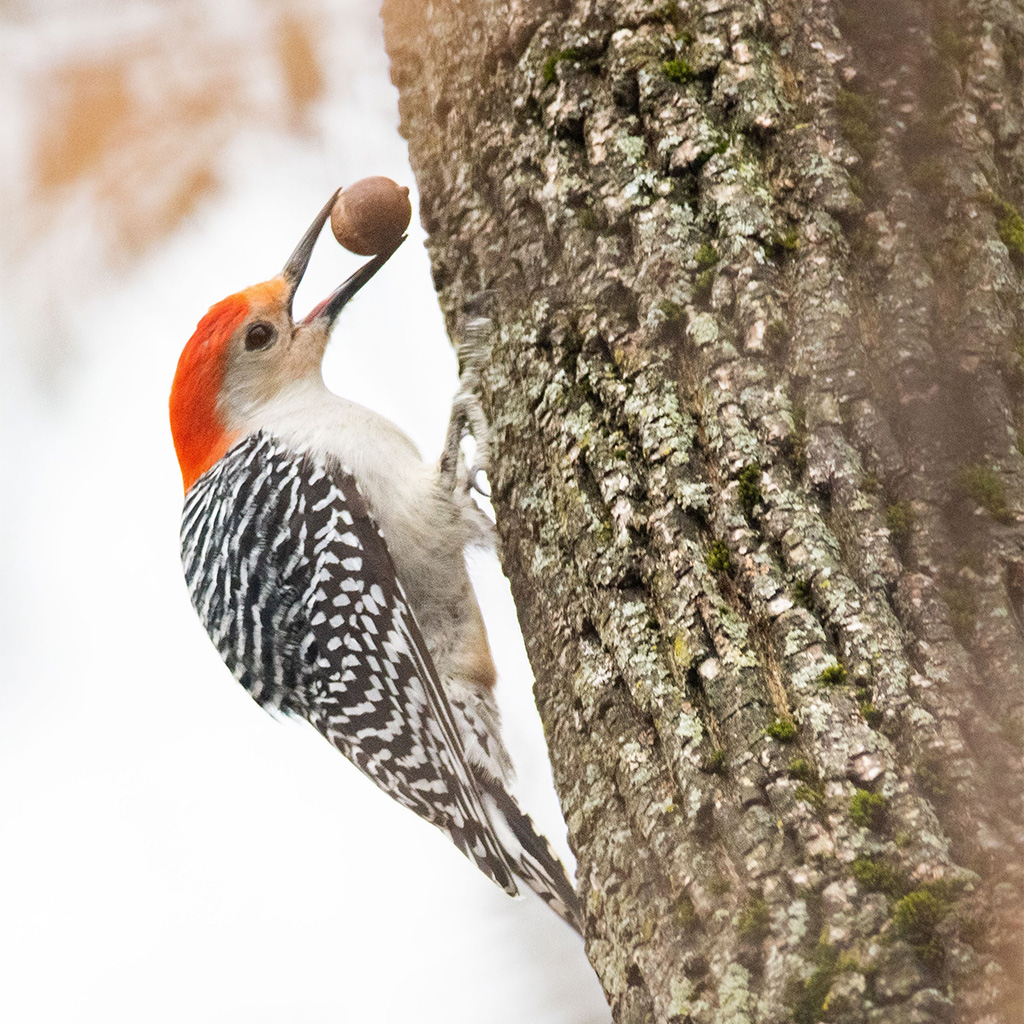 Woodpeckers depend on dead and dying wood for nesting sites. These birds begin nesting in April or May. The male woodpecker finds a nest hole. He then seeks approval from the female by tapping. The female woodpecker taps back to accept the nesting site. They engage in mutual tapping that helps establish and maintain the pair bond as they excavate the nest cavity – most often in a tree trunk, but they have been known to nest in fence posts or even telephone poles! It takes a week to 10 days for the pair to excavate a nesting cavity, which is about 10 inches deep and 2 inches in diameter. You would think all this pounding on wood could harm the brain, but the woodpecker’s shock-absorbing skull serves as a cushion. Inside the cavity, the birds don’t actually build a nest, but rather place wood chips on which the female lays eggs. Starlings often compete with these birds for nesting cavities, and can evict red-bellied woodpeckers from their homes. 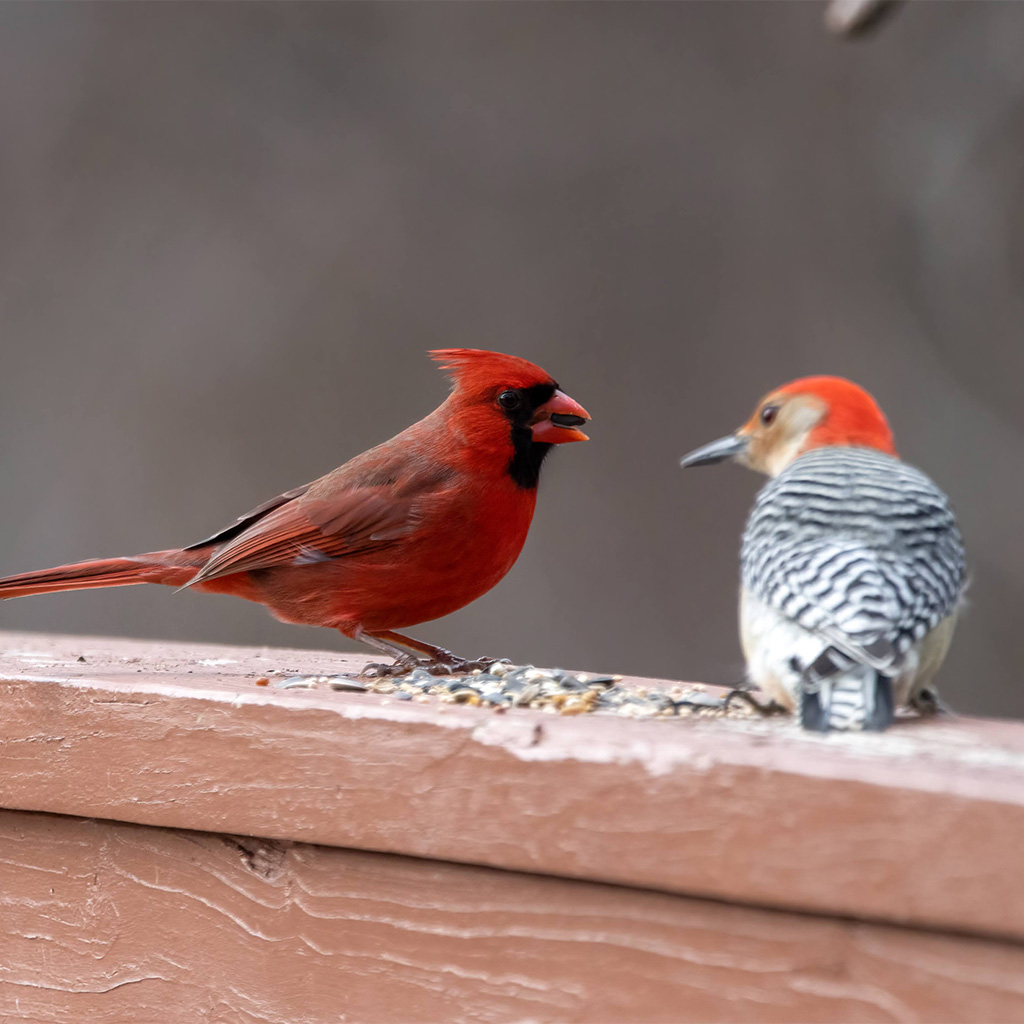 A cardinal and a red-bellied woodpecker collect seeds in December. (Photo: Richard George)

The female lays about four eggs. She incubates them during the day, while the male incubates the eggs at night. In about 12 days the eggs hatch. After about 25 days, the once-naked birds have grown feathers and fledge. They stay close to the nesting site for a few days, then begin following their parents to sources of food. These juvenile birds remain on their parent’s territory for about six months after fledging. At the end of the summer, the birds molt their feathers completely. 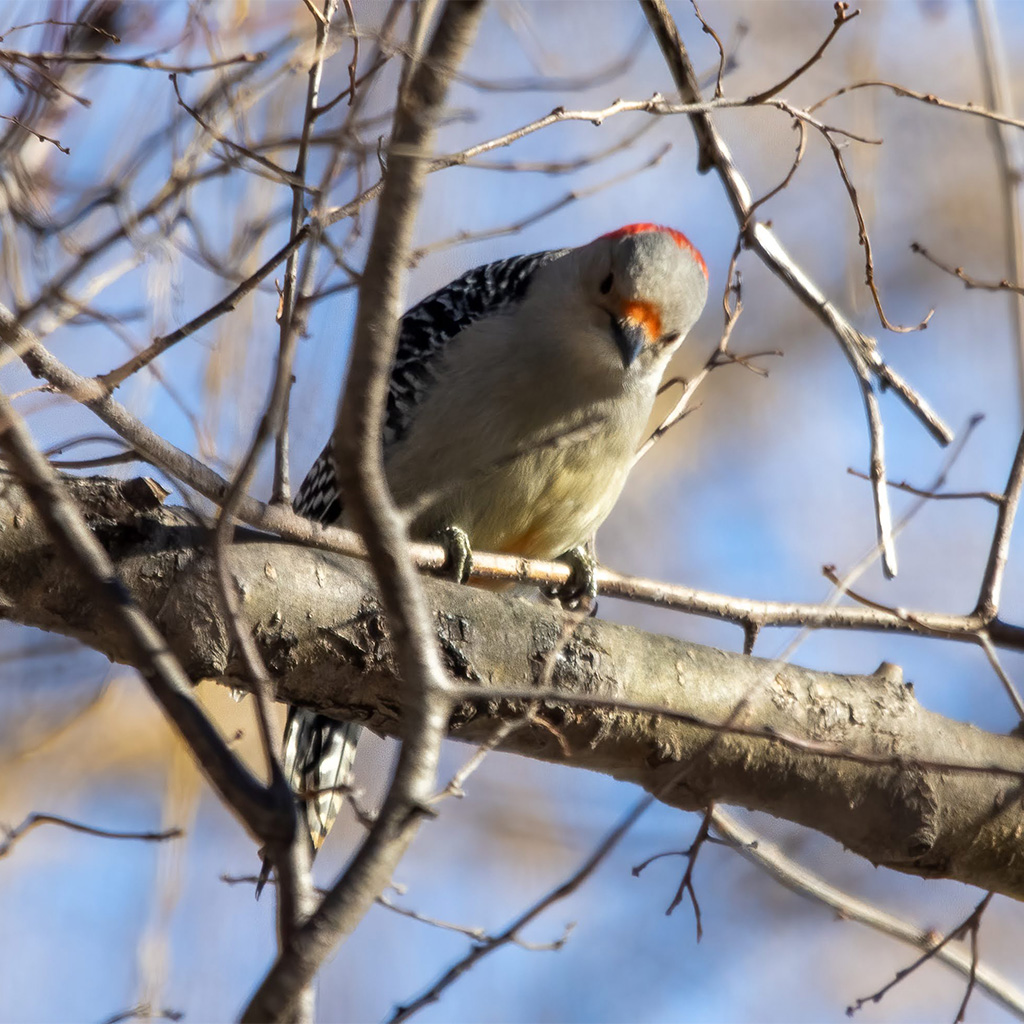 Female red-bellied woodpeckers have patches of red on the back of the neck and above the bill. (Photo: Richard George)

Depending on the season, about one-fourth to one-half of the woodpecker’s diet is insects; the rest is seeds, berries, nuts, and other fruit. Red-bellied woodpeckers store seeds and nuts by wedging them into cracks in tree bark. At bird feeders, these birds like suet, cracked corn and black sunflower seeds. Like other woodpeckers, the red-bellied woodpecker has a long, bristly barbed tongue, which sticks out a couple of inches past the end of its beak. The tongue spears and extracts insects that have bored into trees. The bristles are good for licking sap, and the tongue’s sticky saliva helps them devour ants or catch insects in tree crevices. Males have a longer and wider tongue than females, which allows males and females to forage in different places to collect the greatest variety of food for their chicks. 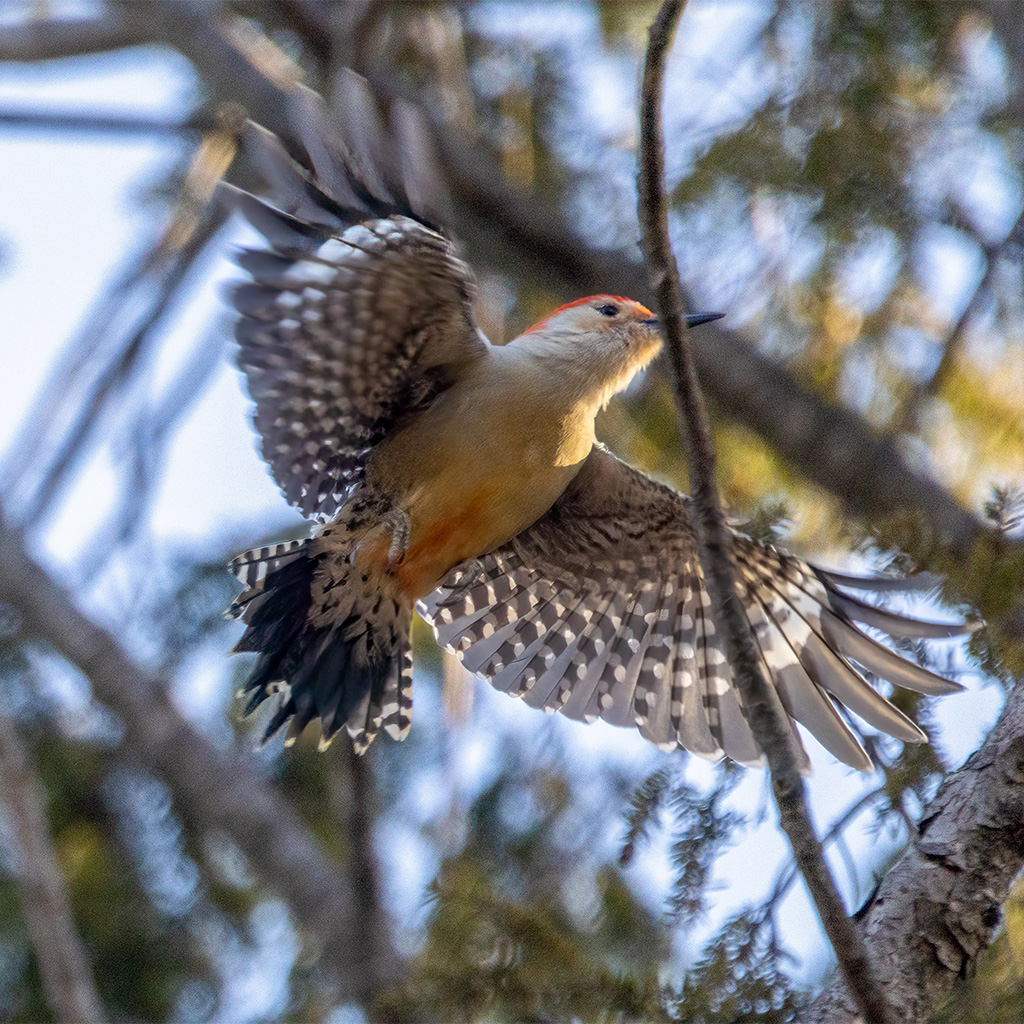 This red-bellied woodpecker in Cambridge has tinges of red on its belly. (Photo: Richard George)

This woodpecker uses its bill to peck and pull away bark as it searches for insects, to excavate nesting cavities and to communicate by drumming. Males drum (with six rapid taps) on hollow trees, aluminum roofs, metal gutters and even transformer boxes to attract females, and during boundary disputes with other males. 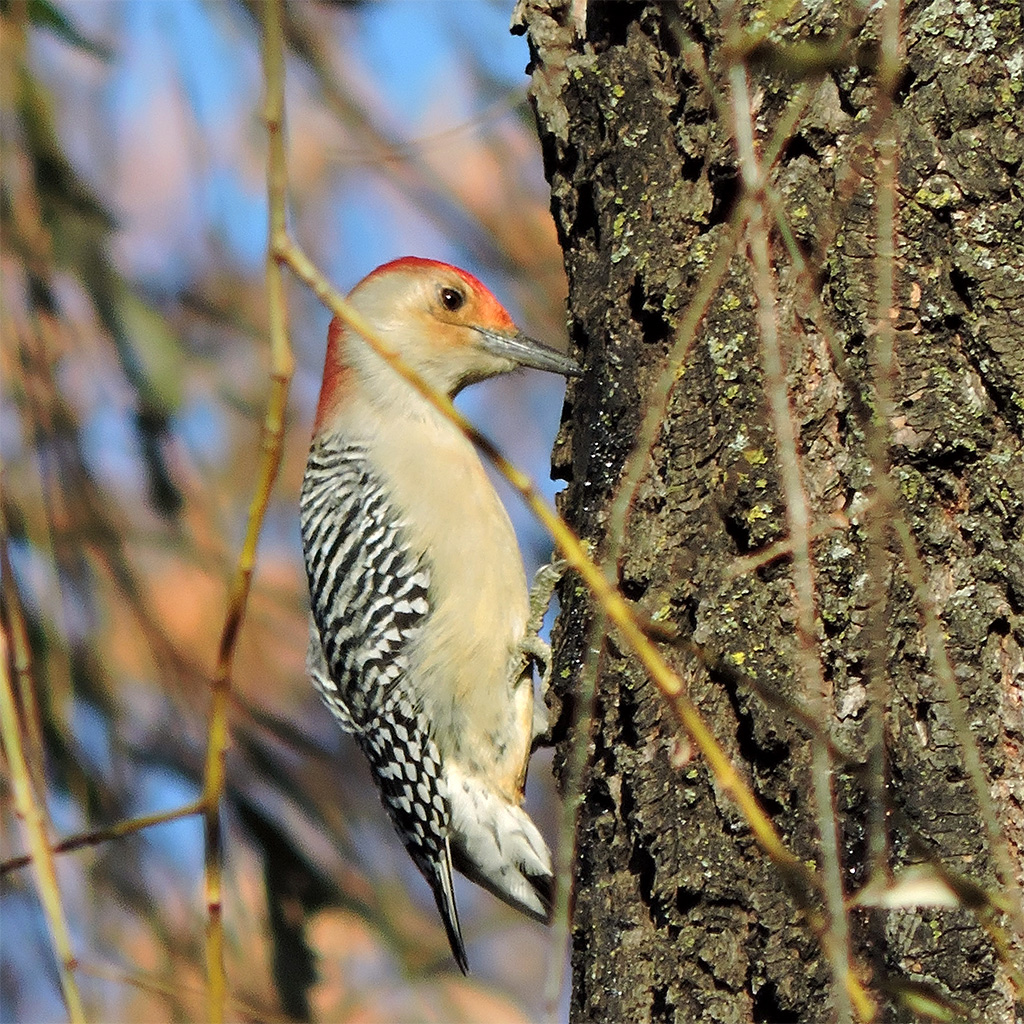 Often the red tinge on the belly is difficult to see. (Photo: Ann Schlesinger)

Red-bellied woodpeckers are around all winter. Stroll through Fresh Pond when the weather is nice and see if you can spy them.