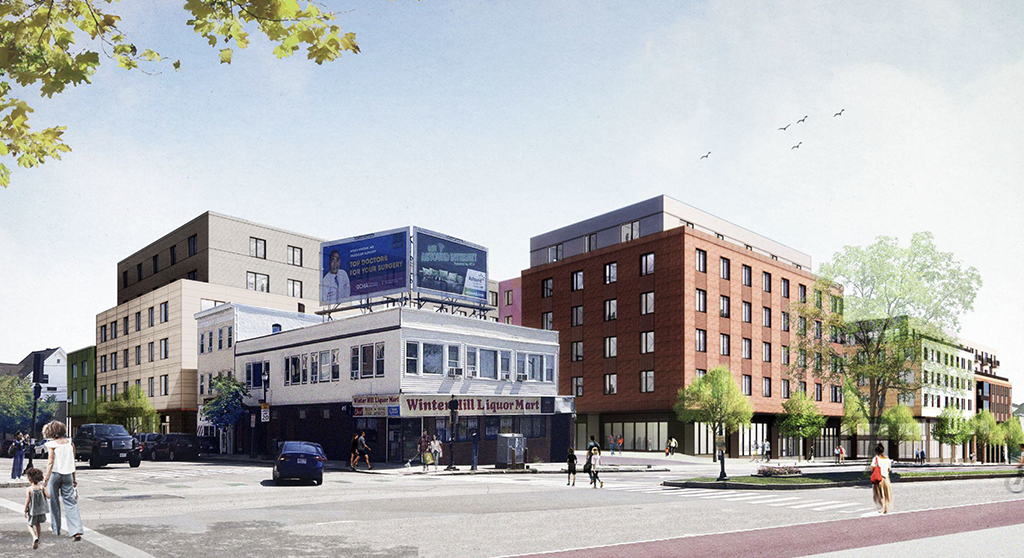 A rendering of buildings at 299 Broadway, Somerville, show them wrapping around the existing Winter Hill Liquor Mart at Temple Street. (Image via Somerville Zoning Board of Appeals)

The planned redevelopment at the site of a long-closed Star Market appeared to have broad public support Wednesday in the second of a series of public hearings held by the Somerville Zoning Board of Appeals. The board plans to vote Feb. 1 on whether to grant a comprehensive permit for the project, which would approve all requested waivers for the project rather than voting on each one individually.

The proposal for 299 Broadway, Winter Hill, contains two six-story buildings with 288 residential units, ground-floor retail and civic spaces that include a plaza, park and multiuse room meant for use by the general Somerville community. Its number of affordable homes has grown to 46 percent of the total units from 20 percent – one of the significant changes over the past two years as a result of community feedback from seven neighborhood meetings. Other adjustments include building design changes and the removal of underground parking due to asbestos concerns.

“We have brought the public along for that whole ride,” said Adam Dash, the permit applicants’ attorney.

The project would replace a grocery store that has been empty since closing in 2007.

With the exception of a few comments regarding a planned lack of parking, the hearing demonstrated overwhelming support for the redevelopment.

Somerville resident Seth Hurwitz expressed appreciation for the project’s emphasis on affordable housing and sustainability, saying developers had done “excellent” outreach, taking the time “to meet with folks individually to talk about their concerns,” Hurwitz said. “I trust that the vision they have for the site is going to be a tremendous benefit for the community. It will be truly devastating if the request for these waivers is denied.” 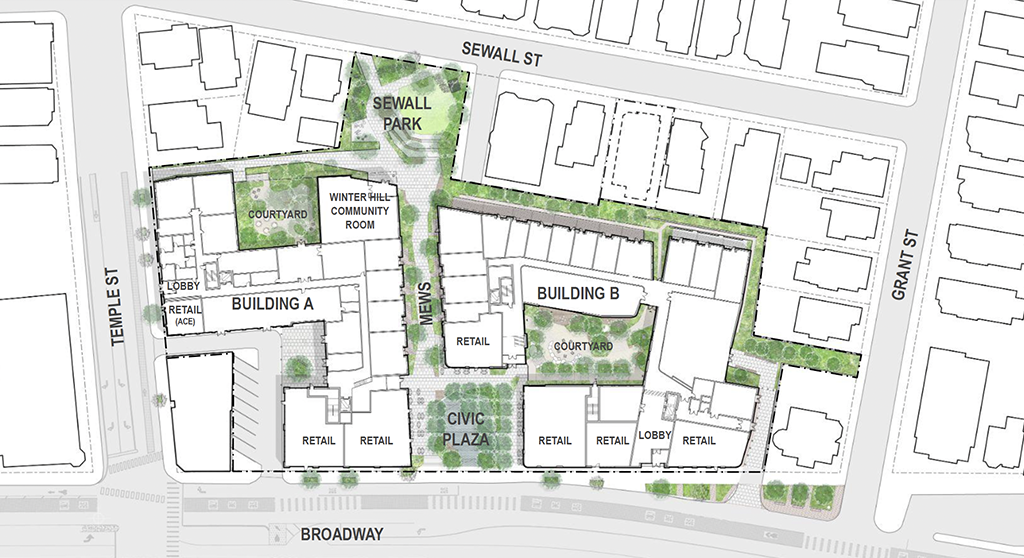 A site plan of the 299 Broadway proposal. (Image via via Somerville Zoning Board of Appeals)

Waivers are needed because of the unusual challenges of the site, said Tim Love, the founding principal of Boston-based architecture film Utile. In particular, there’s an incline along Broadway and Temple Street, requiring adjustments in floor-to-floor heights in the ground level of the building as well as increased spacing between entrances.

“The existing development parcel has no right angles, a strange configuration that includes a little neck that runs out to Grand Street and other idiosyncrasies,” Love said. “That whole list of waivers is just the site that we’re dealt. The existing site presented 90 percent of the rationale for the ask.”

The companies collaborating on the design – Mark Development, Beacon Communities Services and RISE Together – unveiled the latest project details Wednesday on building design, an affordable-housing component, transportation access and sustainability.

The redevelopment will consist of two buildings configured to appear as if they are actually several different structures, due partially to maximum facade lengths mandated by the zoning code, but also to an urban design strategy. “The buildings’ primary job in terms of urban design is actually to shape the spaces around them,” Love said. “You can see the way they dodge and weave to create other very interesting spaces.”

Nearly half of the site’s homes, or 132 of the 288, would be designated for low-income residents. A tiered income system would insure affordability for various residents: a set number of units would be set aside for residents earning at or below 30 percent, 60 percent or 80 percent of the annual median income in Somerville, according to Josh Cohen, president of real estate firm Beacon Communities. The units would come in a variety of sizes.

“Across the site, we’re going to be serving this very, very wide range of incomes, from folks at market levels to folks at extremely low income levels,” Cohen said.

Due to separate sources of funding for the affordable and market-rate housing units, the majority of the affordable units, or 115, would be concentrated in one building. That worried board member Brian Cook. “Has there been any further thought about the psychological impact of the concentration of the lower-income levels?” Cook asked.

A unified design that obscures boundaries between the two buildings and access to amenities from both means it won’t be seen as “that building and this building,” Cohen said.

“The ground-floor retail that will be part of both buildings will create a neighborhood and make it clear that it’s all one,” Cohen said. “When we look at the school, the park and the civic plaza, it’s easy to imagine that this will be a community – both buildings together, knitted in with the rest of Broadway.” The park and plaza are connected by a passageway called The Mews. 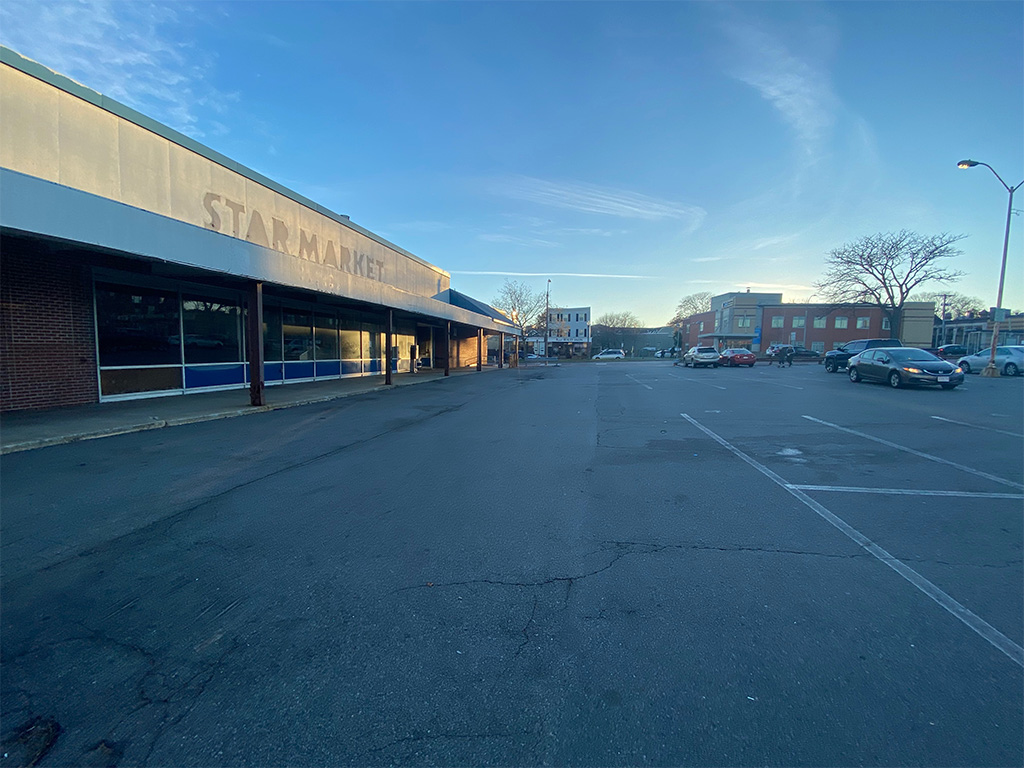 The Star Market in Somerville’s Winter Hill has been empty since 2007. (Photo: Marc Levy)

The Mark Development team collaborated with Graffito, a real estate and urban design firm, to design a retail space drawing inspiration from what’s already in Somerville.

“Graffito’s vision is community-focused retail carefully curated to dovetail into the existing retail and the neighborhood fabric, and to be a resource for the entire neighborhood,” Love said.

For many residents, transportation was the most controversial aspect of the plan. No spaces for cars are proposed, despite it replacing a parking lot. Developers ask that half the market-rate homes, or 78 units, be eligible to apply for resident on-street parking permits.

Civil engineering company VHB, which served as transportation consultants on the project, performed an assessment and determined that under normal conditions there were significant vacancies in parking spaces within a 10-minute walk of the site, presenters said.

Randy Hart, VHB’s director of transportation, planning and engineering, offered solutions including a cap on the number of on-street parking permits granted to market-rate housing residents, a city-owned bike share station and giving new residents public-transit Charlie Cards with $90 of stored value and a month of Bluebikes membership.

To work toward the city’s goal to become carbon neutral by 2050, the project was designed to align with the Passive House standard, a set of principles centered around energy efficiency. “This standard drives building heating and cooling loads down, minimizes carbon emissions and maximizes benefits for health as well as environmental quality,” said Jeff Geisinger, director of sustainable design at Utile. “We’re taking a comprehensive approach to sustainability. We’re looking at everything from water systems to healthy materials, as well as a low-impact site.”