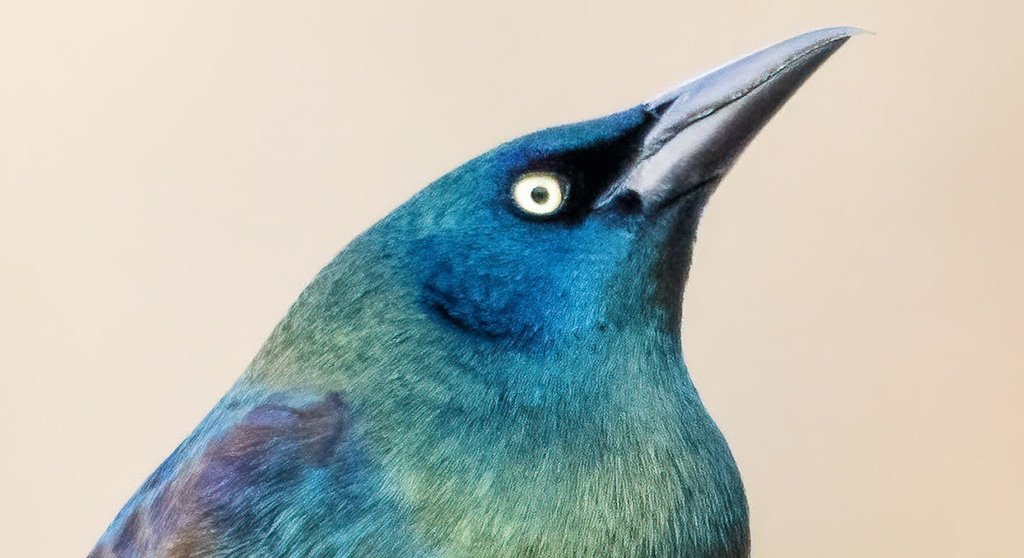 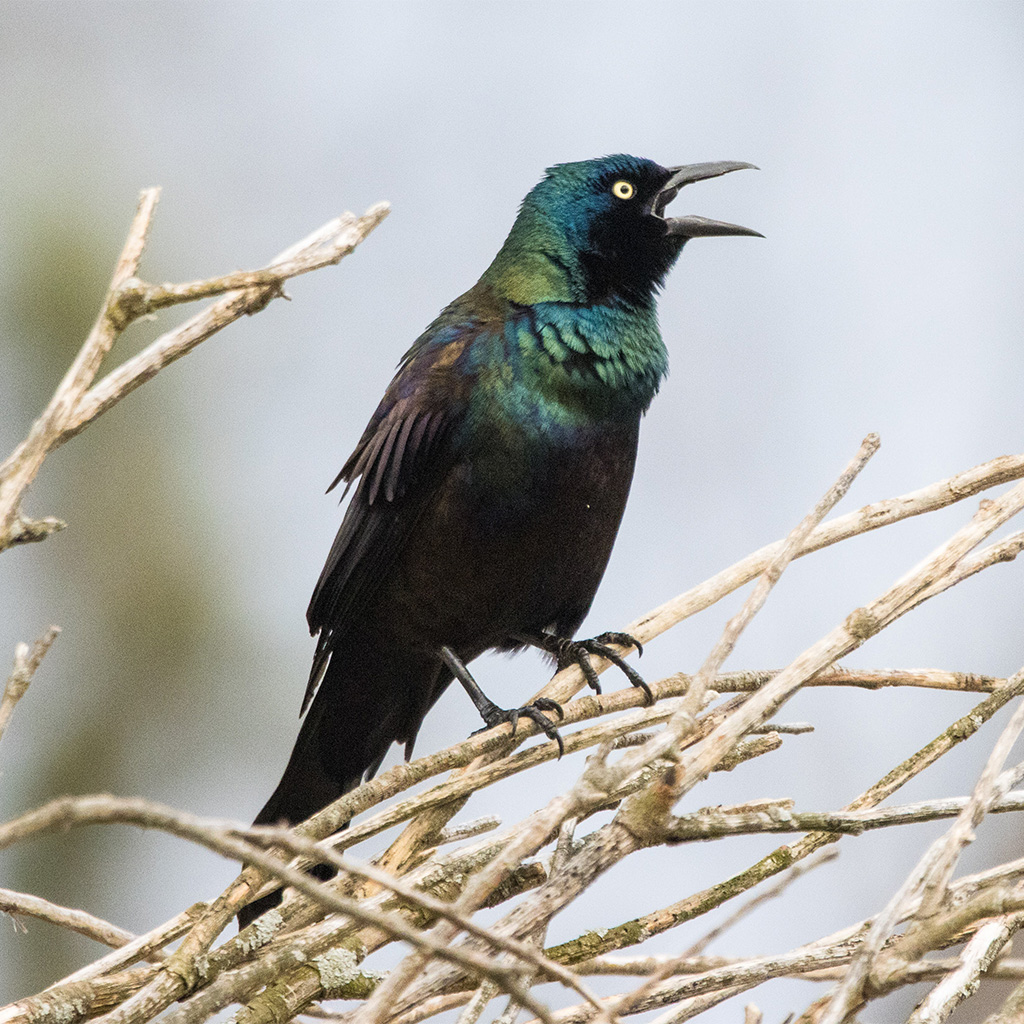 The common grackle (Quiscalus quiscula), native to North America, is a member of the blackbird family and, as the name implies, is quite common and abundant. You can spot grackles in Massachusetts all year long.

Many migrate south about 200 miles in mixed-species flocks with red-winged blackbirds and starlings, but others stay, especially if the winter is mild. In the winter, these birds eat mostly seeds – and as long as snow does not cover the ground, they can find food. When it snows, they may feed at bird feeders or dumpsters. The grackles that migrate return to our area in February or March, earlier than most other species of birds. 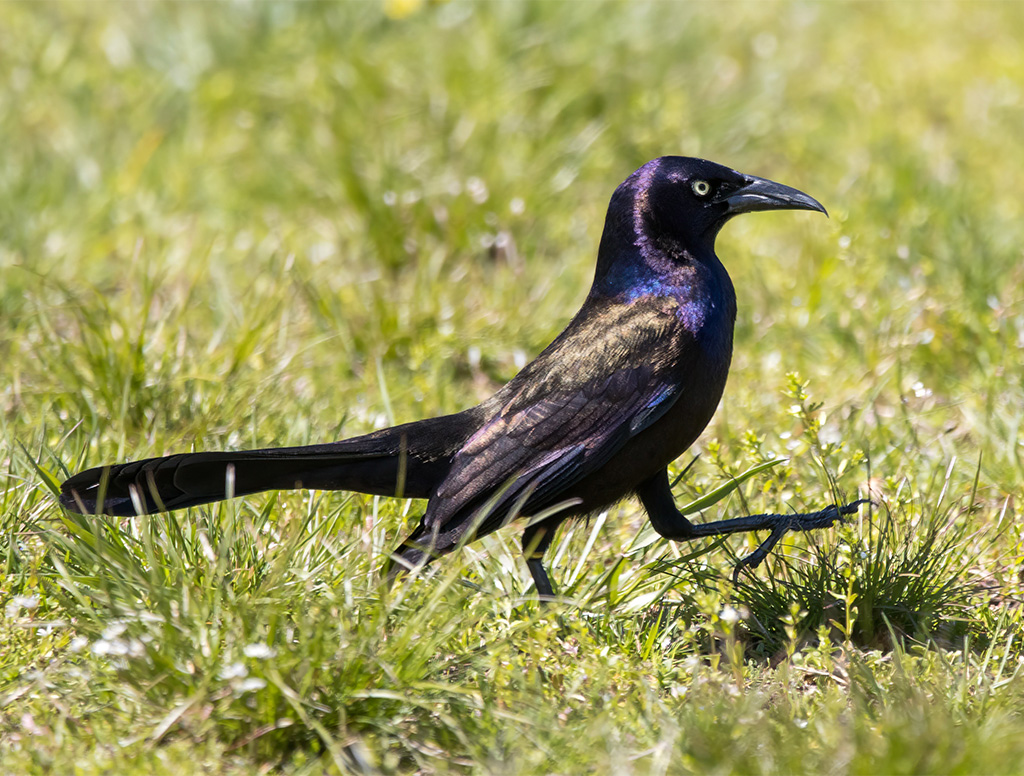 A grackle in Huron Village in May 2021. (Photo: Richard George)

Grackles have pale yellow eyes that stand out against their iridescent black feathers, which can look purple or green in the sunlight. They have long, slightly downturned bills that give them a profile similar to that of Gru from “Despicable Me.” Grackles are large birds – more than a foot in length – and their wedge-shaped tails make them distinctive in flight.

William Brewster, an ornithologist and Cambridge native, said this about the common grackle in 1906: “By far the largest colony which has existed anywhere in the Cambridge Region within my recollection was established in the Fresh Pond Swamps in the spring of 1889. There were only a few birds at first, but they continued to spread and increase until by 1898 there must have been upwards of two hundred of them.” 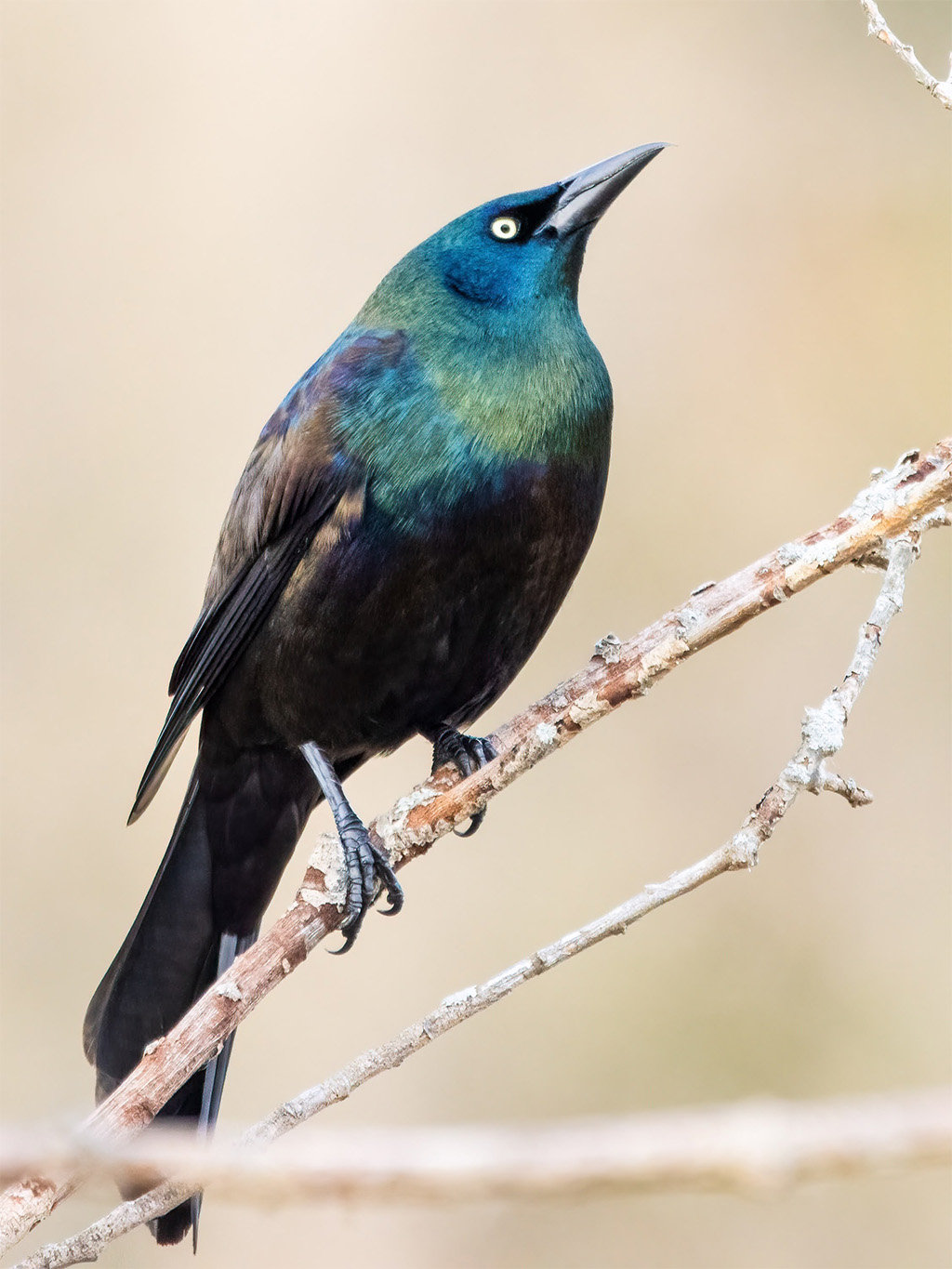 There is another William Brewster, who arrived in Plymouth in 1620 on the Mayflower with two indentured servants, children really, aged 6 and 7. (In England, Samuel More believed his four children, ages 4 to 8, were not his because they resembled another man. Therefore, he had the children shipped off as indentured servants on the Mayflower. Only one of the four, Richard More, survived the first winter. Richard became a well-known sea captain, based in Salem.) But neither William Brewster nor Richard More wrote about grackles, so we will end their tale here. 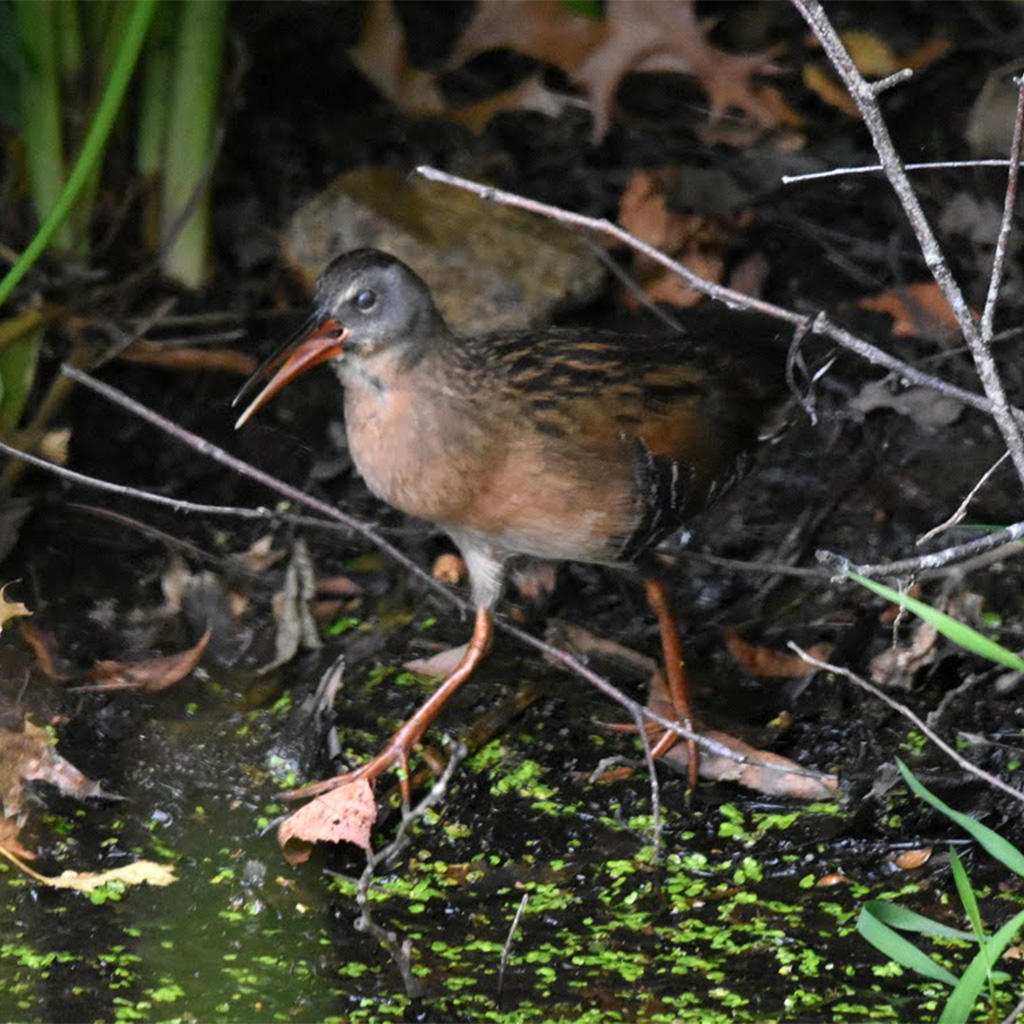 Virginia rails were nearly exterminated from Fresh Pond in the late 1800s, but today some have returned. (Photo: Brian Vigorito)

The ornithologist William Brewster also noted that cutting down vegetation to make a path around Fresh Pond in 1884 eliminated rails, a type of secretive, marsh-loving, ground-dwelling bird. Today, some rails have returned to marshy areas near Fresh Pond and in recent years people have even spotted Virginia rails overwintering on Cape Cod and the Islands. Because Fresh Pond at the time was also a municipal water supply, the city required police officers to shoot their guns to scare off ducks that might pollute the water.

Grackles are social and loud birds. Common grackles can breed in almost any habitat except old-growth forests, which means they flourished in North America once Europeans arrived and cleared forests for farmland. Their love of corn and other seeds made them an agricultural pest, though, and they ate eggs of birds that hunters wanted to proliferate. People persecuted grackles for many years as a result. 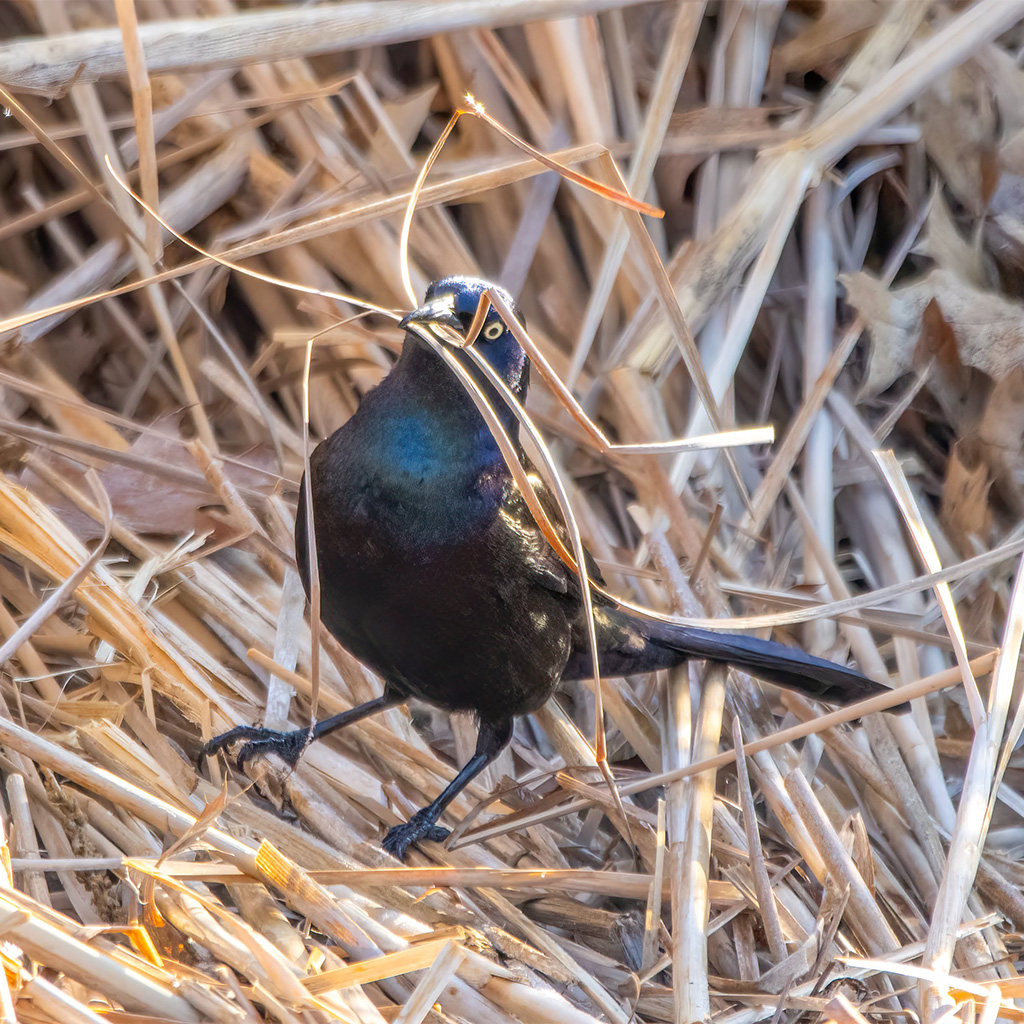 A grackle preparing a nest in March. (Photo: Richard George)

Although intensely hunted in the 1800s, grackles apparently did not taste good. According to John James Audubon in Birds of America (1830):

The flesh of the Purple Grakle is little better than that of the Crow, being dry and ill-flavoured, notwithstanding which it is frequently used, with the addition of one or two Golden-winged Woodpeckers or Redwings, to make what is here called pot pie, even amidst a profusion of so many better things. The eggs, on the contrary, are very delicate, and I am astonished that those who are so anxious for the destruction of these birds do not gratify their wishes by eating them while yet in embryo in the egg.

Overall, grackle populations remained relatively stable for many decades. Today, although the birds are still widespread, there are signs of declining abundance – 2 percent per year since 1966, for a cumulative decline of more than 50 percent. 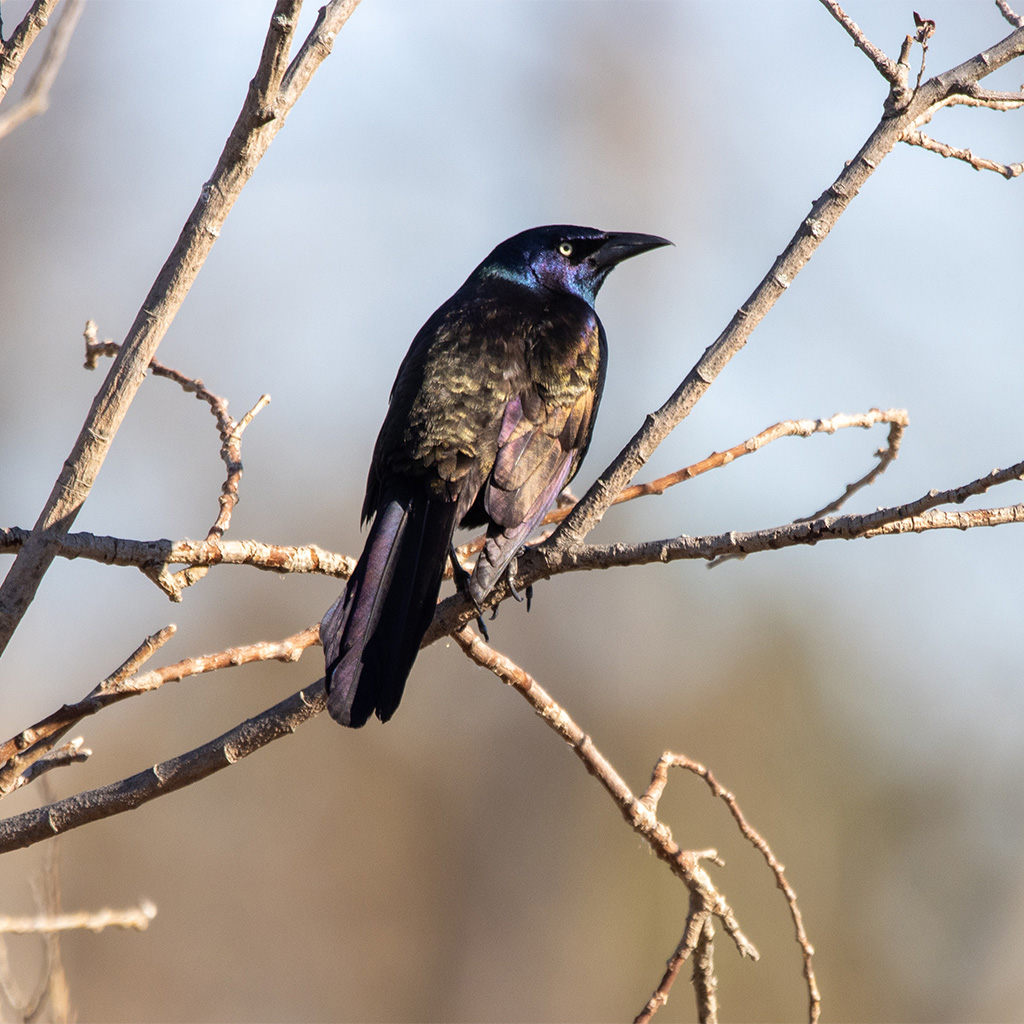 A grackle rests in the sunlight. (Photo: Richard George)

Grackles form breeding pairs in the spring. During breeding season, it is easy to identify male grackles because they fly with the tail spread out in a V-shape. The female chooses a nest site and spends about five days building a large, bulky nest in an evergreen tree. The female lays five to six light blue eggs. About half the males leave the females at this point, and these females rear the chicks alone. The chicks leave the nest about two weeks after they hatch. Parents feed chicks for several weeks after they leave the nest. 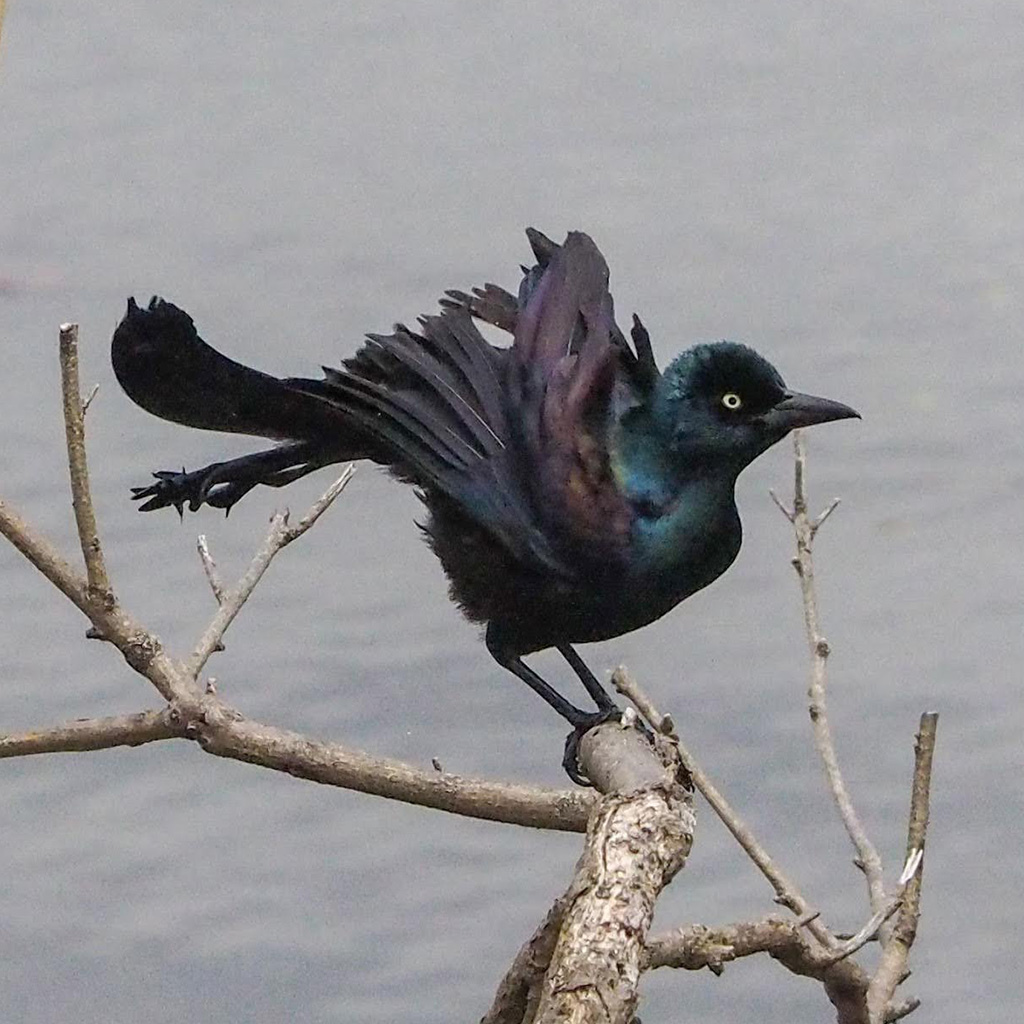 A grackle in Somerville stretches and fluffs its feathers. (Photo: Jeanine Farley)

Although grackles have never been observed drinking water (they seem to get all the water they need from food), they do drop the waste of their chicks into water, often rivers or streams. Disposing of the waste in water makes it difficult for predators to find the nest, since the nest does not smell. In areas of the country where backyard pools are common, however, this behavior makes the grackle an annoying pest.

Grackles, like pigeons and sparrows, have a deposit of the mineral magnetite inside their skulls, making the birds sensitive to magnetic fields, which can perhaps help them navigate when flying long distances. But the truth is that no one really knows (yet) the purpose of the magnetite. 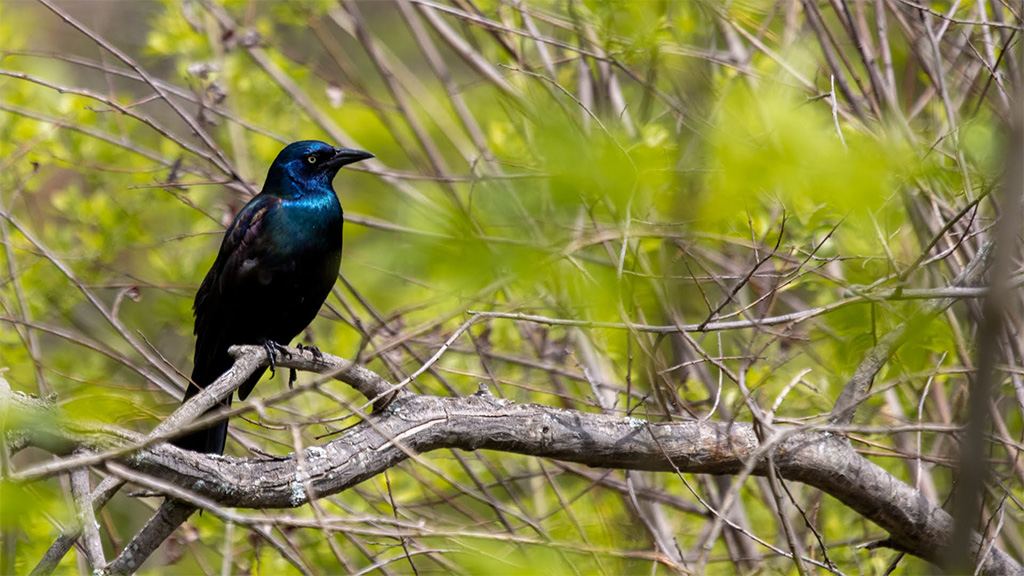 A grackle shimmers in the sunlight. (Photo: Richard George)