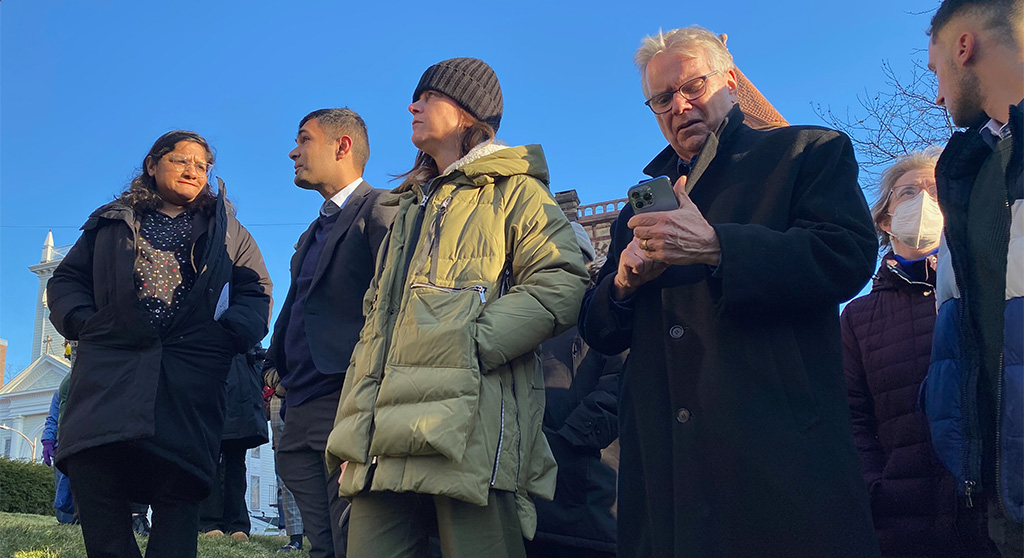 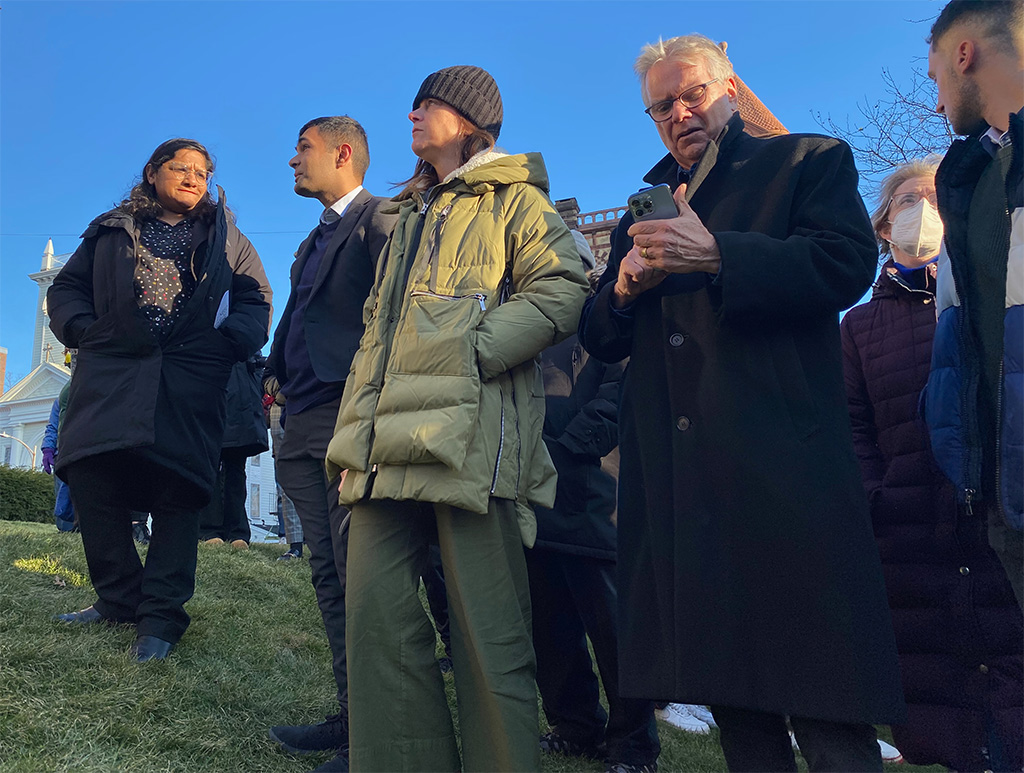 Mayor Sumbul Siddiqui, left, and city councillors outside Cambridge City Hall on Monday during a protest over the killing of a Cambridgeport resident. (Photo: Marc Levy)

In the aftermath of a police shooting that left a 20-year-old Bengali immigrant dead Wednesday, one of the loudest and angriest refrains from his community and allies has been shock and dismay at the lack of police body cameras that could show definitively what happened.

Police leadership and unions, city councillors and staff want the cameras too, and have for years.

It may be the Cambridgeport killing of Sayed Faisal that finally sparks action. Change looked less certain around comprehensive funding for an organization that would replace the police in providing an unarmed response to mental health crises and other community needs.

Mayor Sumbul Siddiqui hoped the public would get answers on “this body cam” question and other issues concerning the killing, including whether an outside investigator would be brought in to look at the circumstances, at a meeting from 6 to 8 p.m. Thursday at the Dr. Martin Luther King Jr. School, 102 Putnam Ave., Riverside. Police commissioner Christine Elow, City Manager Yi-An Huang and Middlesex County district attorney Marian Ryan are expected to take questions.

“Internally we’ve had some of the similar discussions about body cameras” over the past few days, Huang said. “There has been strong support across essentially all of our stakeholders. But the work hasn’t been done yet.”

“This is certainly a moment for us to have that discussion and recommit to it,” Huang said. 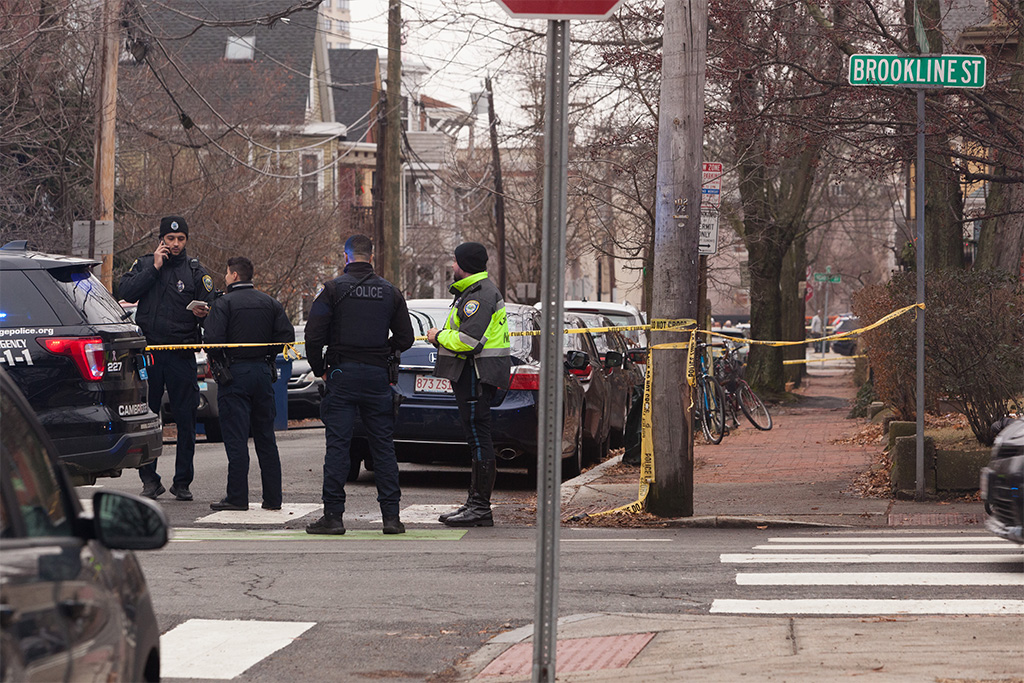 Police in Cambridgeport on Wednesday after the shooting of Sayed Faisal. (Photo: Brandon Constant)

Faisal was killed by police gunfire after he was seen self-harming with shards of glass and a large knife, which he kept with him as he ran around the neighborhood, police said. He still had it when he ignored a nonlethal “sponge round” fired at him and moved toward officers, police said. The death took place in a backyard.No onlookers have been identified.

Protesters have spoken of the death at the hands of police as an injustice like those of Tamir Rice, Breonna Taylor, George Floyd and other people of color. Faisal needed “help, not a bullet,” they said, and public comment at Monday’s meeting included testimony about people who survived mental health crises and confrontations with police – if they were white.

An extensive conversation about body cameras, nonlethal weapons and unarmed response was held in Cambridge in the summer of 2020, after the murder of Floyd by a Minneapolis police officer led to a resurgent Black Lives Matter movement and calls to fund police less and social work more.

The ensuing conversation led to dual proposals for the independent Holistic Emergency Alternative Response Team and a new city agency called the Community Safety Department; a majority of the City Council supported the agency, which has a budget but won’t operate until next month or March, emergency services director Christina Giaccobe told members of the council’s Public Safety Committee in December.

As for body cameras, they weren’t in the police budget in May despite widespread support. “It got put on a to-do list and it never got done,” councillor Marc McGovern said Monday.

It was McGovern who asked during the last budget process – the final one for outgoing city manager Louis A. DePasquale and the first for Elow as commissioner – where the cameras had gone.

“I am such a fan of body cameras. When I think about the transparency and accountability, that would be such a benefit for us,” Elow said in May. “I absolutely am passionate about engaging in that conversation with the council when the time is appropriate … it really is up to the City Council to engage us.”

McGovern noted Monday that there was another budget season underway, and said he expected to see funding for body cameras in what was presented to the council for approval.

Two members of the task force that came up with the Community Safety Department proposal, Samuel Gebru and Loren Crowe, wrote an open letter Monday to the council and city manager requesting “immediate funding for body cameras … a policy for their use in the field and storage, and procedures for Cambridge residents and others to be able to access body camera footage as a public resource,” they wrote. “From our understanding, this issue has had widespread support in Cambridge for several years, including from law enforcement, but no clear implementation plan.”

A plan would mean union negotiations and a process to decide how to protect the privacy of citizens who are photographed and ensure that officers turn on the cameras and audio, among other things, former police commissioner Branville G. Bard Jr. told councillors at a meeting in August 2020. The city might also need permission for cameras from the state Legislature through a home rule petition, city solicitor Nancy Glowa said.

The city passed an anti-surveillance law in December 2018 that would require council approval for cameras on police officers or in police cruisers, and councillors have approached them with caution. “Body-worn cameras on police officers can be used to hold police accountable for their actions, or as intrusive devices that vastly expand police power and expose ordinary people to government surveillance of their most intimate, challenging moments,” the local American Civil Liberties Union warned.

“I’m glad that we passed a really strong surveillance ordinance, because there are concerns,” vice mayor Alanna Mallon said in August 2020. “We know that facial recognition is notoriously bad for misidentifying black and brown individuals, which would hurt the community.” Mallon does support police wearing body cameras, she clarified this week. 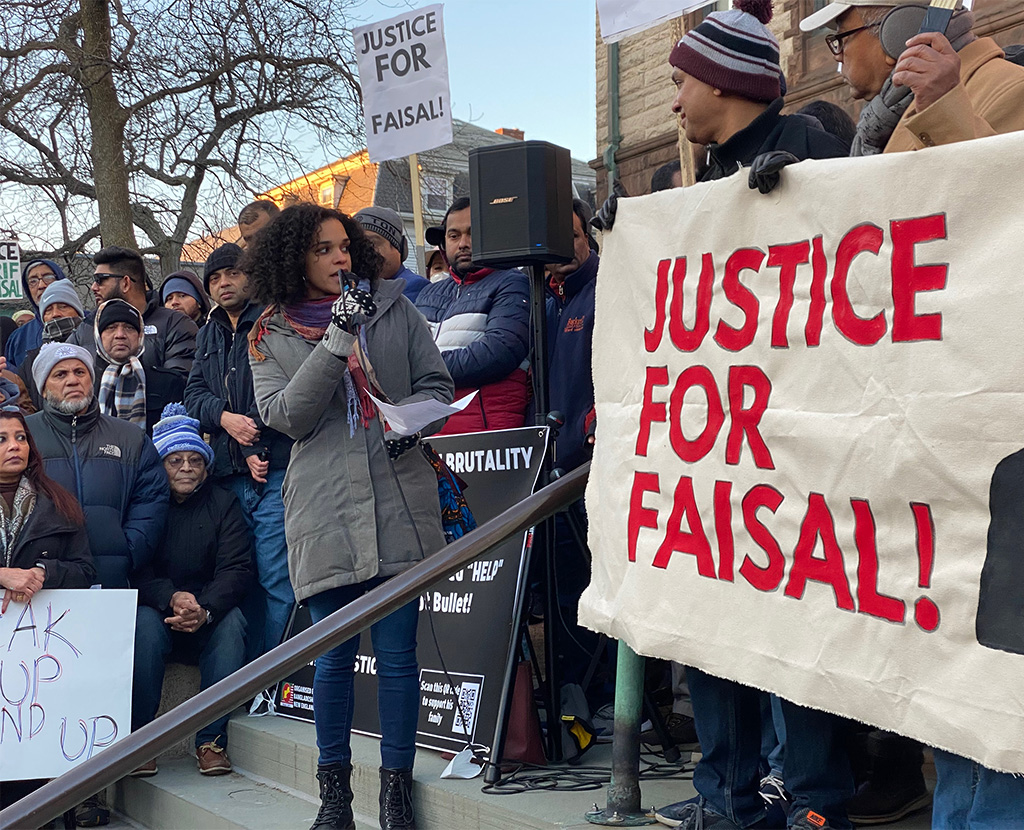 Councillor Quinton Zondervan, who said the time since Faisal’s death had “easily been the most difficult week in my five years on the council,” used Monday’s meeting to repeat calls to back the Heart program – echoing calls during public comment that the program was ready to serve with $1 million in city funding.

It could have helped keep Faisal from entering the moment of crisis that led to the confrontation with police, Zondervan said.

“Despite the lack of funding from the city so far, Heart has done yeoman’s work to get off the ground. They have hired a full staff, including seven fully trained responders who are deeply connected to the community in a way that the police or other city staff frankly can never be. They are ready to begin taking calls,” Zondervan said. “All they need is funding and cooperation.”

Aside from councillor Patty Nolan saying it was “time to accelerate” plans for alternative responses, there was no response to Zondervan’s call.

Sue Reinert contributed to this report