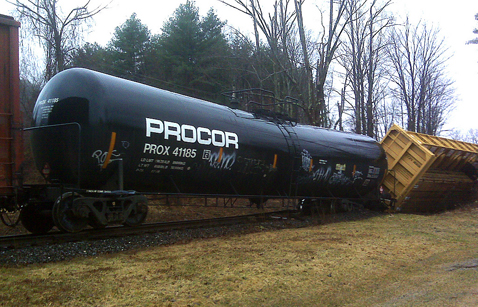 With Monday’s attacks on the Boston Marathon fresh in mind, citizens had even more reason to fear the coming of mile-long trains filled with ethanol snaking their way through Cambridge and Somerville twice a week.

So far the plan – put in place at the federal level to the benefit of Waltham-based Global Partners – looks unstoppable, being just the local version of the shipping of hazardous materials by rail that happens all over the country. But state Sen. Sal DiDomenico and state Reps. Marjorie Decker, Jonathan Hecht and Tim Toomey were in Cambridge on Tuesday brainstorming with residents about how to stop the dangerous chemical from coming through two of the most densely populated cities in the country.

“We have a strategy we are working on. We need to pull that together and have one unified way of approaching this,” said Toomey, like Decker a Cambridge city councillor in addition to being a state representative.

Notification of a next meeting would come in the next two weeks, he said, with members of the state’s Congressional delegation, staffers for U.S. Sen. Elizabeth Warren and officials from the state Department of Transportation and the governor’ staff on hand. (Transportation officials were to have presented their study at the meeting, but were stretched thin by helping in the aftermath of the Marathon attack, DiDomenico said.)

Also attending the Tuesday meeting was councillor Minka vanBeuzekom, who was a member of the Massachusetts DOT Task Force on the Safety of Ethanol Transport.

Search for a legal argument

The key to a fight was finding an argument that made Cambridge, Somerville and the other cities affected by the plan – Allston, Brighton, Chelsea, East Boston, Everett and Revere, for a total 191,992 people within a half-mile of four stretches of train tracks – legally different from everywhere else in the country where ethanol transport by train has gone into effect, including the 21 places where there have been spills of ethanol in the past five years. (In the same period, according to the state study, there were 68 rail accidents in Massachusetts, including five collisions and 39 derailments.) While the ethanol is now taken to Boston by barge from Providence, R.I., it actually already travels by rail through Massachusetts, through Springfield and Worcester on its way to Rhode Island.

The federal nature of the plan means the ethanol trains can use whatever tracks they want, although because freight takes a backseat to public transit, the trains will have to roll at night. And because there are limits to how long intersections can be blocked to traffic and a 30 mile per hour speed limit on the tracks, the trains will be limited to 60 cars, vanBeuzekom said. That’s still 1.8 million gallons of ethanol coming through twice a week and 187 million gallons every year.

“There hasn’t been a strong will in the state to fight this,” Decker said. “And the precedent is that when they have gone to court, they’ve lost. At the moment, the law is not on our side.”

There was some thought among residents that it was time to call in the chit implied by Cambridge and Somerville’s strong campaign efforts for President Barack Obama, and Toomey thought Gov. Deval Patrick might leverage his friendship with Obama to put pressure on the Federal Railroad Administration.

Terrorism and a nuclear power plant

The ranks of state officials at a Tuesday meeting about ethanol were thinned by response to terrorist violence Monday in Boston. (Photo: Marc Levy)

But for most of the dozens of people gathered in the King Open School auditorium Tuesday, the Marathon attack provided an abundance of reasons why ethanol trains couldn’t be trusted to rattle safely through town:

Not only do tracks pass within several feet of Cambridge homes – and some residents were panicked at the thought of what ethanol passing twice a week would do to their property values – but right by Everett’s giant Liquefied Natural Gas storage facility; power substations at the Walden Street bridge in Cambridge and in Union Square in Somerville; through a short tunnel at a Massachusetts Institute of Technology building; and directly by the institute’s nuclear reactor.

Only a day after two crude, homemade bombs killed three and seriously injured 176, residents were in no mood to take risks.

“You can buy a rocket-propelled grenade for $50,” resident Brad Bellows said, and another resident worried catastrophic damage could result from just a thoughtless teen with a crowbar.

“One way to attack the federal statute is to show ways in which two federal statutes conflict with each other. On the Grand Junction line we’ve got MIT’s nuclear reactor 60 feet from the tracks. The safety permitting for that building did not include millions of gallons of ethanol traveling 60 feet from the building. That’s the Nuclear Regulatory Commission,” Bellows said. “They either need to redo the whole safety analysis for the MIT reactor or shut it down. Or stop the shipments.”

Bellows, an architect who showed up with a raft of ethanol research, thought he saw a way to go after the plan legislatively as well: Make Global Partners bear the cost of insurance, and the full financial risk of an accident, for the shipments.

“That’s a winning argument, because how could they justify not doing that? And you can figure out what is the liability insurance they would have to carry to cover the risk of wiping out Kendall Square for $10 billion in property value in one of the premier biotech centers on the planet,” Bellows said. “They’re not going to get that insurance. Nobody would write that coverage. That could be the end of the whole thing right there – why should they be making a profit by transferring liability to other people?”

A region on its own

But so far that is exactly how ethanol shipments work. Toomey noted that not only do communities have to pay on their own for the alcohol-resistant foam that is the only means to fight an ethanol fire, as well as for safety drills and evacuation plans; but that the state is on the hook to pay for the track and railroad crossing upgrades needed to prepare for ethanol trains coming through.

Since the Legislature controls state funds, theoretically state lawmakers could refuse to allocate money for those improvements, blocking the trains indefinitely. But the political will isn’t there,  DiDomenico said after the meeting.

“We can vote against it, the legislators in our communities,” DiDomenico said. “But if the overarching majority votes for it – you know how this works; they’ll tack on [an amendment] that’ll be enticing for a lot of people in different parts of the state. There’s really 16 reps affected and maybe six or seven senators, compared with 200.”

Over the next weeks, the officials and residents agreed there had to be bigger push to send e-mails opposing the plans at the federal level; organization through social media; an online petition; and better connections with the other communities facing the same risks.