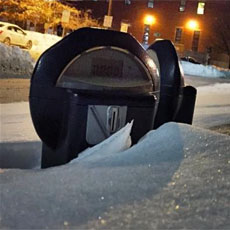 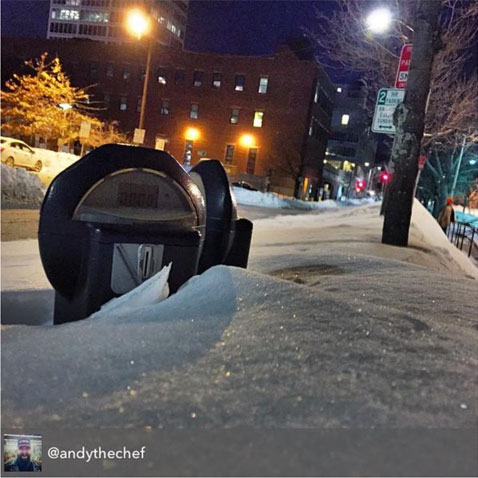 Here we go again. With a winter storm warning in place until 1 a.m. Tuesday and an estimated 17 inches of snow on the way, the city has brought back its Snow Emergency Parking Ban rules as of 4 p.m. today and canceled public schools and all public meetings, including the City Council meeting, planned for Monday.

While only four inches of now is expected over the remaining weekend (and 11 inches Monday), the city will begin immediately towing cars it finds parked on streets with “No Parking During Snow Emergency” signs, city officials said.

A free off-street parking program for Cambridge residents with city-issued parking permits kicks in at the same time, though, letting drivers moved their cars into spots at the Galleria Mall and First Street Garage in East Cambridge; Green Street Garage in Central Square; 52 Oxford Garage near Harvard Square; 65 Waverly St., in the Area II/MIT area by Cambridgeport; and the One Kendall Square Garage.

The National Weather Service warns of heavy snow in a “long-durations snow event” with accumulation of 10 to 18 inches and “heavy accumulations expected especially near the Interstate 95 corridor” – and, in cause for concern in Cambridge and Somerville, a potential “localized heavier band of 18 to 24 inches” from near Boston and into Northeast Massachusetts.

The area is still dealing with large piles of snow from what weather experts have called its snowiest week in history.

For those keeping track, the council missed two regular meetings in January for a planning roundtable and the Dr. Martin Luther King Jr. holiday, leading to a marathon session – itself bumped to Jan. 29 for a rare Thursday meeting from the regularly scheduled Jan. 26, again because of snow – of some six hours and 15 minutes. The council finished at midnight, barely getting through the city manager’s 24 items and adopting communications and resolutions. That left 27 councillors’ policy orders and another four “charter righted” matters.

The current council agenda shows 45 policy orders, one charter right and nine items from the city manager, and the council has canceled meetings of its Housing Committee on Tuesday (to talk about incentive zoning, which helps build affordable housing through a so-called “linkage” fee to developers) and its Ordinance Committee on Wednesday (to talk about a plastic bag reduction law, an issue the council has been debating for eight years).

Late last week city officials reported the death of Brian Murphy, assistant city manager for community development and a former city councillor. He oversaw a department of more than 44 people and led initiatives in community planning, economic development, environmental and transportation planning and housing, leaving a significant gap in municipal expertise. Murphy also had roots in  city government going back to at least his first council term in 2002, and his death leaves longtime colleagues on the council and city staff shocked and mourning.