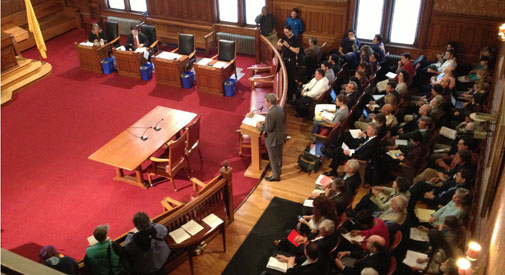 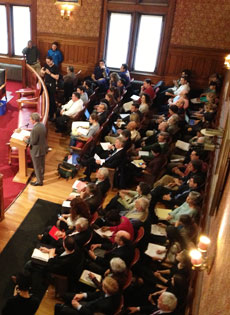 That 4.5-hour meeting held April 1 about a proposed residential tower for Central Square was absolute misery. But we all know the drill by now, starting with the usual suspects saying the predictable things during seemingly interminable public comment periods, delighting allies and inflaming foes, dividing the community one three-minute slog at a time.

But it’s not the fault of developers or the whole of the City Council – and certainly of no resident – that every big project becomes an extended crisis and battle in an ongoing and growing civil war. The fault lies with city managers, the Community Development Department and certain city councillors (current and past) who made it so.

It’s terrific that there is movement to finally resolve these issues. City planners and managers have a memo to present tonight showing progress on a development master plan, responding to a request by councillor Marc McGovern, and Central Square planning returned to the council’s Ordinance Committee on April 15 at councillors’ insistence – and with councillors Leland Cheung, Dennis Benzan and E. Denise Simmons calling for clear timelines there as well.

The city needs to be pushed.

It was only a year ago that officials gave up on the fiction that Cambridge already had an adequate master plan; and even after that, their chosen authors of a July interim report on the process questioned whether the work was about development or would actually happen. It’s notable that the master plan memo shows such an emphasis on Alewife, flooding and climate change, topics residents have been pushing for years.

It was also only recently that the city admitted that it had purposely diverted the K2C2 process of rethinking Kendall and Central squares, having decided – apparently on its own – to let zoning be decided parcel by parcel, project by project. This was shocking, considering that these processes go back to June 2010 and the launch of the Mayor’s Red Ribbon Commission on the Delights and Concerns of Central Square, which led into C2. It included the work of dozens of citizens in addition to a $350,000 consultant ordered by the City Council and chosen by the city to come up with, essentially, mini-master plans that will now become considered as part of a master plan.

Inevitably, this makes it look like a public process has been turned into a developer-led process.

Iram Farooq, the acting head of the city’s planning department, has taken back the words of her predecessor, Brian Murphy, claiming the CDD policy was “misinterpreted at some point … We certainly did not intend for that to be a piecemeal process” and that Murphy’s comments were “referring to the Kendall Square PUDs” – little comfort to people who participated in K2 on the promise it would get a full city process, not via one Planned Unit Development after another.

Central Square residents have little reason to believe it. Added to the lack of action on C2, they’ll likely remember Murphy recommending Forest City zoning in January 2013 because “the proposed rezoning is consistent with the recommendations of the yearlong Central Square Planning Study.” When asked in December what happened to C2, he included the Normandy/Twining Mass+Main project asking for its own zoning under the rubric of “Central Square: Zoning.”

Councillors recognized it too. Here’s Leland Cheung, Marc McGovern and vice mayor Dennis Benzan referring to how “The City Council has not yet considered any [K2C2] zoning or ordinance amendments, except within the scope of a proposed project.”

It’s probably why Murphy, who had two months to correct the record before his sudden death in February, never made a peep about being “misinterpreted” despite being sent a link to a story based on his comments immediately after publication with a direct request that “If there are any issues of fact, quote, clarity or context you want me to look at, let me know.” 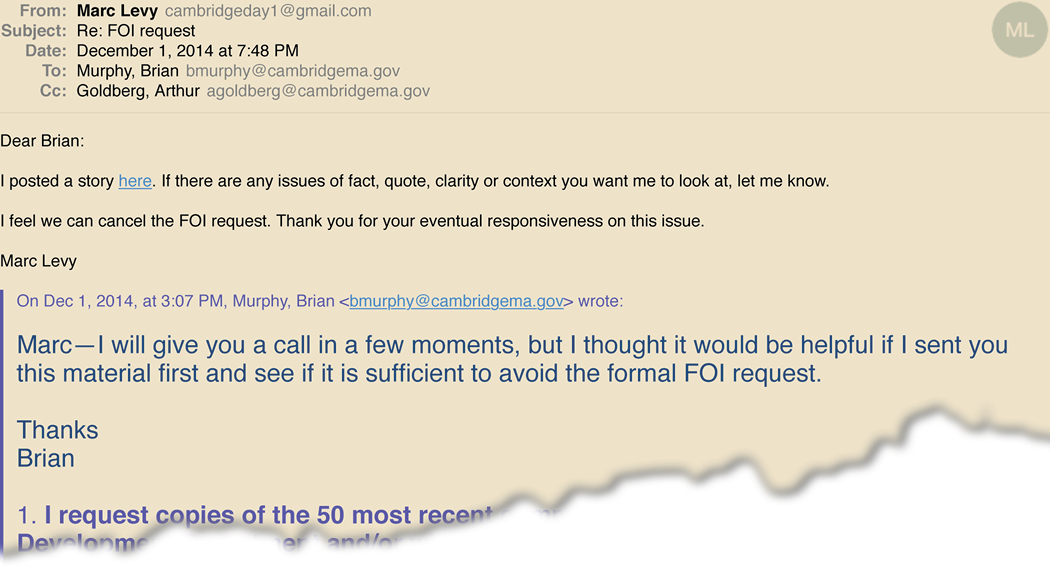 If Murphy felt misinterpreted on such a serious issue, it is odd that he let the wider community go on misinterpreting him. And now it is Farooq who has declined to respond to a Wednesday email to present evidence that Murphy was misunderstood.

Every Kendall and Central development that’s come along since has invoked K2C2 one way or another, but it doesn’t matter whether the developments follow the principles invoked in those studies, because those plans have never been adopted.

The chaos is clear in discussion of Mass+Main from April 1, as proponents say it follows C2 principles on retail and housing while opponents say it ignores the principles by planting semi-eternal parking lots in Central Square. Again, none of this matters, because C2 isn’t the law. Similarly, the transformation of 14 acres of federal land in the heart of Kendall Square, an elaborate plan for open space there and talk of a 1,000-foot tower are being debated without K2 actually being in place.

Stuart Dash, the city’s director of Community Planning, noted April 15 that hopes for a higher tower and more housing being built on Ames Street by Boston Properties were frustrated because K2 zoning wasn’t in place. Sarah Kennedy, director of government affairs for the city’s Chamber of Commerce, said much the same about Central Square, echoing Simmons on the need for “predictability for building owners and potential developers. The challenge for many of them is that these guideposts are moved often and/or are stalled.” When a project following current zoning was proposed at Ten Essex in Central Square, resident Saul Tannenbaum complained that “those policies … are out of date [and] failing to respond quickly enough to the changes happening in our world and our community.”

He’s right. These things should have been acted on long ago, but city government resisted, preferring to see residents battle each other and developers project by project.

What it means to want a vote

Yet supporters of recently proposed projects have taken to criticizing the call for K2C2 to be voted and for a master plan to be in place as context for the work. Sometimes it’s derided as a delaying tactic and sometimes as outright hypocrisy, since many in that crowd were dissatisfied with K2C2’s process and suggestions.

But calling for a vote doesn’t mean you suddenly support one side or another. It means you want a vote – and for the issues to be settled. Holistically.

Cambridge Day has been caught up in this as well: Being accused of “sandbagging” the C2 process while it was under way and now thinking it is “terrific.” Neither is true. This site has asked repeatedly what happened to K2C2 because that public process should be brought to the voted conclusion of a comprehensive vision on which it was sold.

A real master plan is also necessary because the lack of one – like, at this point, the lack of K2C2 – is tearing the city apart, one project after another.

Again, that is not the fault of the residents. It is the fault of the city managers, Community Development Department and some councillors and their haphazard, irresponsible obfuscations and delay tactics. When they decry the lack of civility in public hearings and at the venom directed at Planning Board members, they should remember that it is city policies that have fed and cultivated this environment.