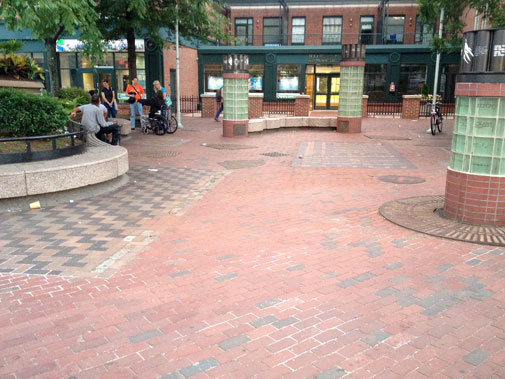 The mass of initiatives and programs fighting an epidemic of hard-drug addiction, abuse and overdose is failing, officials said Monday at a roundtable held by the City Council, leading some to consider giving Central Square relief from the social services that seem to concentrate the problem there.

“We can’t continue to put all these uses in Central Square,” councillor Craig Kelley said. “If we want to expand access to [drug treatment], zoning has to be linked to a support network … we need to put services in places there’s support, and I think that’s where the council’s conversation will go.”

Councillors Marc McGovern and Dennis Benzan noted the unfortunate placement of a school bus stop right by the square’s drug needle exchange – something called out as long ago as 2012 by council candidate Gary Mello – amid a general decay of filth, garbage and public presence of drug abuse that had families afraid to walk through the square. Benzan said he’d seen people leave the needle exchange and shoot up drugs immediately outside, while Mello has complained of persistent use by drug users of restrooms at the square’s public library branch.

Having raised the issue in strong terms at the council’s summer meeting, Benzan told gathered city officials that included Police Commissioner Richard C. Haas that “I am not seeing deployment of folks on streets.”

“This is the worst I’ve ever seen this crisis in the city,” said Benzan, who recalled being aware of the use of crack, cocaine and heroin during the years he was growing up in Cambridge. “People need to feel safe.”

Last month, police department director of communications and media relations Jeremy Warnick pointed to the year’s 17 drug-related incidents in the Central Square neighborhoods Cambridgeport and Mid-Cambridge, on a downward trend from the 32 last year and 26 in 2013. “Also, our Special Investigations Unit is doing a great identifying and arresting some of the key drug players in Central Square,” Warnick said, noting that during the week of Sept. 16 police arrested four men suspected of dealing and seized from them 20 bags of heroin, six bags of cocaine and $1,775 in cash.

Police data show 11 overdose deaths in Cambridge last year, with eight of those determined to be from heroin, Warnick said. (“The fact that the numbers of deaths among Cambridge residents is relatively low doesn’t take into account nonfatal overdoses,” said Susan Feinberg, spokeswoman for the Cambridge Public Health Department.)

At the council’s Aug. 10 meeting, Benzan and McGovern’s order for action on opioid abuse drew impassioned testimony from officials and members of the public, including from Pat Medeiros, a lifelong Cantabrigian with three children afflicted with heroin addiction – one dead, another in prison and another “who tried to kill me in July because of his addiction.”

“I truly hope the city will wake up and realize we have a serious problem here,” said Medeiros, whose Nan-Anon group from 7 to 9 p.m. Wednesdays at the Salvation Army trains family members of addicts in the use of Narcan, which can be injected to counteract opioid overdoses.

But the problem is about prescription drug abuse as much as it is about illegal drugs, according to the health officials gathered Monday. With the popularity of legal opioids such as fentanyl, used to treat chronic pain, fighting opioid abuse wasn’t just about arresting heroin dealers, but about keeping an eye on leftover medications in bathroom cabinets, the prescriptions of the city’s many elderly and such tricks as injured students who get medicine from a doctor at school and double the dose by seeing a doctor at home. (Fentanyl is also sometimes mixed with heroin – and, at 10 to 30 times the potency, has led to a spike in heroin-related deaths.)

The problem is also not just in Central Square – or even just there and in North Cambridge, where a North Charles drug-counseling clinic on Washburn Avenue is upsetting neighbors and drawing accusations of improper operation.

There are three bills focused on drug abuse coming before the state Legislature – limiting prescriptions from emergency rooms or walk-in clinics, adding a substance called NBOMe to the list of controlled substances and giving district attorneys more flexibility in charging someone whose activities led to an fatal overdose – and even more nationally. Congresswoman Katherine Clark announced last month that her Protecting Our Infants Act of 2015 passed the House after it was found that the number of babies suffering from withdrawal had grown nearly fivefold from 2000 to 2012.

“Going in the wrong direction”

There’s been a dramatic increase in use among those ages 15 to 24 and among women too, said Meghan Hynes, program manager of the AIDS Action Committee’s needle exchange program, and the officials said that as of Monday there had been 147 deaths in Middlesex County responded to by state police detectives, with 75 percent of those attributed to heroin. That’s more than in all of 2014, when there were 145 in total and 71 percent were attributed to heroin.

The state has seen a 57 increase in opioid-related deaths statewide since 2010, said state Secretary of Health and Human Services Marylou Sudders, with more people now dying from opioids in Massachusetts than from car accidents.

“This epidemic has been long in the making, and it’s going to take us a long time to bend the trend,” Sudders said.

Middlesex District Attorney Marian Ryan, who sponsored training last year for police officers and firefighters across the county in how to use the drug Narcan, agreed that despite the time, money and commitment she had seen applied to the problem, “We are not seeing the growth we should be seeing. The numbers are going in the wrong direction.”

At this point, even stopping the flow of heroin and other opioids wouldn’t solve the problem, because the next difficult step is ending the addiction, she said. There had been five overdoses in the county just over the weekend. 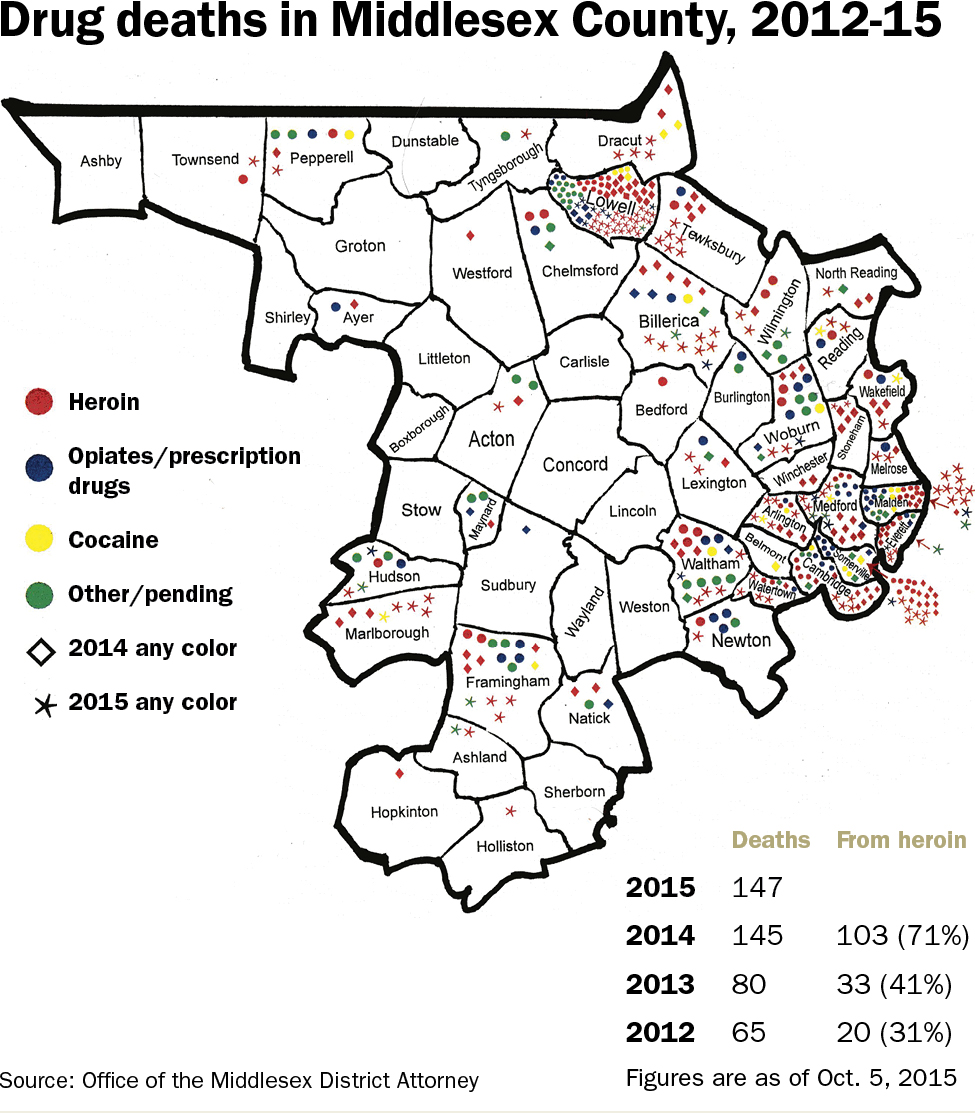 Spotty and slow data have been a problem, which is why a priority of those committed to taking on opioid abuse is faster reporting. A system due to go online early next year will provide monthly data on drug overdoses – a vast improvement over current reporting, for which the latest set of full data is from 2012. While Massachusetts was the first state with a prescription monitoring program, after 15 years it needs an anticipated revamp that will let it interact with similar programs in other states. The current program “is clunky,” Sudders said. “That’s my kindest word for it.” Other immediate improvements sought by Hynes and others is for Cambridge police to carry Narcan and to allow more needle exchanges to keep hepatitis C and HIV infection trends going the right direction. Haas said a law enforcement meeting in July resulted in improved outreach methods that started on the path prescribed by Hynes: to treat the person in addition to the problem.

Still, there remains a funding problem, said Mark McGovern, director at Cambridge/Somerville HealthCare for the Homeless: “We used to have a place to send people for treatment, but those are long gone.”

First Justice Roann Sragow of Cambridge District Court, meanwhile, said the three-year-old Drug Court program she oversaw was finding success by providing support for users who wanted to turn their lives around, but “we could do better if we had greater funds. We turn people away.”

While councillors Nadeem Mazen and Dennis Carlone took a more holistic approach Monday and asked officials to at least provide funding requests to add to a sense of the drug problem’s scope, Benzan has expressed a greater sense of urgency focused more on the upkeep and safety of Central Square.  “I don’t see the resources on the streets,” he said, underlining his request for more attention from police – including possibly a satellite police station in the square – and the Department of Public Works. “I want to leave these chambers knowing we have a [plan] in the short term and in the long term. I want to know we’re going to devote resources to combat problems in Central Square today, that we have resources on the ground today.”

Hearing concerns about the presence of the needle exchange and its desperate clients in Central, though, Hynes had a defense of its work that was both brutal and shocking in its perspective on the problem.

“I don’t have a solution,” she said, but keeping the needle exchange means keeping the problem – and the ugly overdoses – in public where people can be saved. Without it, the problem will “just run more out of control. It will be happening behind closed doors.”