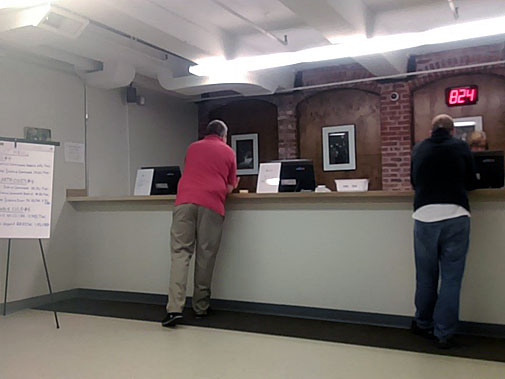 Before Sage Cannabis can sell medical marijuana in a below-ground retail space between Harvard and Central squares, it has to sell city officials and residents on why it’s a good idea.

According to rules adopted by the city in 2013, dispensaries are supposed to be limited to two “medical marijuana overlay districts” in the Alewife and NorthPoint neighborhoods. Those zones have never been used, despite 79 percent of city voters saying a year earlier that they wanted a medical marijuana dispensary in Cambridge.

In seeking new zoning that would allow a dispensary at 1001 Massachusetts Ave. in the Mid-Cambridge neighborhood, Michael Dundas, chief executive of Sage, is arguing that a radical rethinking of pot rules at the state level makes Cambridge’s medical marijuana overlay districts outmoded.

“At the time, what became the [medical marijuana] zones seemed to be a good fit,” Dundas said. “But the [state] process has changed.”

Medical marijuana was legalized statewide in November 2012, but the structure put in place by the Department of Public Health to approve a few dispensaries in each county resulted instead in  knocking almost all applicants out of the process. “What it was doing was weeding people out,” said Nichole Snow, executive director at the pro-medical marijuana Massachusetts Patient Advocacy Alliance, a nonprofit based in Salem. The number of applicants plummeted to 20 from more than 180, she said, “and only nine came out the other side. It was not fair to patients.”

Snow credits the administration of Gov. Charlie Baker with driving change, so that now more dispensaries are able to open – including a facility already being built by Sage to grow and sell medical marijuana in Milford in Central Massachusetts. (Sage used to be called Milford Medicinals).

Scott Zoback, a spokesman for the state agency, gives more credit to a willingness to listen to criticism from outside government. “One of the things we heard is that there was need for a process that was more transparent, where the steps were easier to follow, that was based more on judging applicants on the same standards and occurs more on a rolling basis, so we would examine applications as they come in rather than as one big group,” Zoback said. “It’s important to remember that this is still a very new process. [Baker predecessor Gov. Deval Patrick] all along said he thought the medical marijuana program needed to be reviewed.”

Cambridge’s zoning reflected the rules promulgated at the state level, including the belief that each of up to 35 dispensaries would serve a region, not just a city, and should be accessible by highways and other major transportation routes. Now the number of dispensaries that can open is unlimited and the state mainly wants to see that a community isn’t opposed to a applicant, Snow said. Originally there was a belief all dispensaries would grow marijuana onsite and be “seed to sale”; Sage is among those that get product delivered from another site.

Dundas came before the City Council in November and found some support among officials for applying the principles of the Alewife and NorthPoint zoning – such as being more than 500 feet from a school or other place children gather – anywhere in the city.

But even councillors expressing interest in the dispensary and concern that the overlay districts weren’t working, such as vice mayor Marc McGovern, hesitated over Dundas’ request for an exemption from the zoning for only 1001 Massachusetts Ave.

“I would like to get a legal opinion on the ‘spot zoning’ aspect of this,” McGovern said. 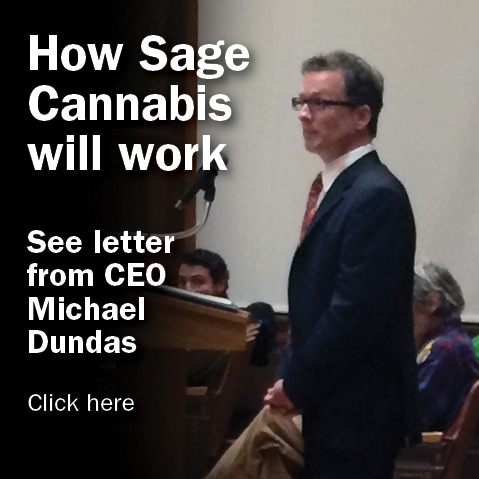 New zoning Dundas has prepared with attorney Sean Hope for Monday’s meeting of the council eliminates that problem by making the existing business zoning between Harvard and Central squares – which includes 1001 Massachusetts Ave. – into a Medical Marijuana Overlay District where the rules of the Alewife and NorthPoint areas can apply.

The zoning was written with the consultation of the city’s Community Development Department, and Dundas and Hope described themselves as “in the middle of our outreach” to councillors and neighborhood groups.

“The zoning needs to be based on some kind of rational criteria,” Hope said. “It’s fortuitous that this section of Mass. Ave. actually has the business zoning, and it’s a district that allows a host of commercial retail uses as of right. It also is very limited in the impact it could have.”

“This has the benefit of being more localized and not within the Harvard or Central Square zoning districts,” Hope said.

Beyond knowing that an applicant is in compliance with local laws and has either acceptance from a community or isn’t opposed by it, the state has no role in siting a dispensary, said Zoback, calling zoning that changes to match how the state has changed its approach a “community-by-community decision.”

But Snow said Dundas’ zoning proposal was sound from a patient perspective. “Patients need access, so they’ll be looking for locations that are central and accessible to public transportation,” she said. “We want lots of dispensaries and need them, because we only have four [statewide]. The calls I get are about patients traveling for miles, for hours and hours, so I’m really grateful for anyone who tries to open one in Cambridge.”

Mike Crawford, a WEMF radio host and marijuana advocate known as Mike Cann, agreed that the Mid-Cambridge location was a great one for people like himself who need access to cannabis to treat painful, stubborn medical conditions – and who, despite being granted the legal right to have it, simply can’t get to it.

“We need a location that’s open to help patients who are still, after all this time, looking on the black market. I’m still not getting my medicine from a licensed dispensary,” he said. “We want to see it T accessible so everyone can get to it. There are a lot of people who want access and nothing close, even with a few opening [around the state]. That’s why I think it’s a great location.”