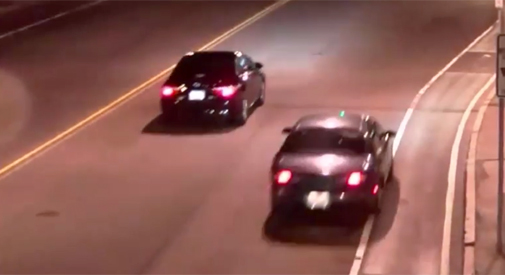 Police have found a suspect in a Sunday hit-and-run of a Cambridge woman in a wheelchair. The driver suspected in the crime is a Somerville resident, Middlesex District Attorney Marian Ryan and Cambridge Police Commissioner Robert Haas said in a press release Thursday.

The 77-year-old woman was struck at about 4:40 a.m. Sunday in her wheelchair on the southbound lane of Columbia Street near Lincoln Street. She sustained serious injuries and was taken to a local hospital, where she remained in critical condition as of Wednesday afternoon, said Jeremy Warnick, director of communications and media relations for Cambridge police.

The driver fled northbound after the crash, heading toward Somerville via Webster Avenue and Prospect Street in a green or blue Ford Taurus, leading police to start a search for a vehicle with damage to its front bumper, headlight and possibly hood, Warnick said. (Video of the car, released by police, is above.) Police believed the driver to be the only person in the car at the time.

“This remains an open and active investigation and no charges have yet been filed,” Ryan and Haas said upon announcing the suspect had been found.