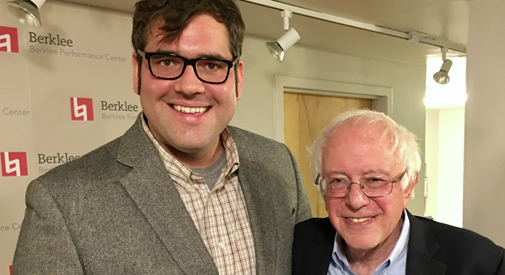 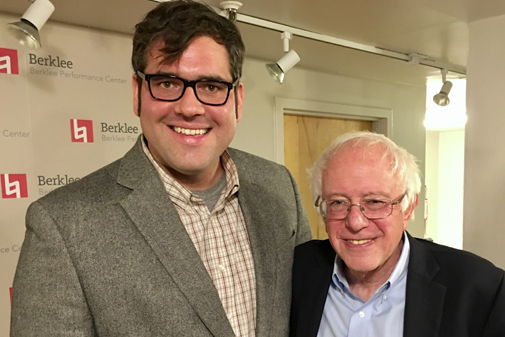 Mike Connolly, who will be inaugurated Tuesday as a state representative, with inspiration U.S. senator and former presidential candidate Bernie Sanders.

The inaugural ceremonies at the State House this Tuesday include the culmination of a political shocker: attorney and community organizer Mike Connolly becoming state representative for the 26th Middlesex District, including parts of East Cambridge and East Somerville – getting there by unseating Tim Toomey after two dozen years on Beacon Hill. According to Connolly’s campaign, adding up all of Toomey’s political wins for School Committee, City Council and state primaries and general elections, Toomey won 38 elections in a row before coming up against Connolly. (He is still on the council.)

Yet despite decades of experience, political experience and constituent service, Toomey fell to Connolly in a September primary, losing with 45.5 percent of combined primary votes to the challenger’s 54.5 percent. Connolly went on to win 15,872 votes in the uncontested general election, believed to be the most ever for a House candidate in the district.

This doesn’t look like simple anti-incumbent fervor, but like a sign of a progressive spirit in two cities densely populated by the young and other liberals fired up by Bernie Sanders’ approach to running for president. Connolly was endorsed by the Sanders-inspired Our Revolution group (it was a Toomey campaign talking point), and has even been mentioned by Sanders himself in an interview with The Nation.

And Connolly is serious about his role in the revolution, not only citing a recognition of mainstream Democratic shortcomings as his motivation, but calling the results of voting nationwide Nov. 8 a full-on repudiation of the Clintonian approach to politics.

Locally, there’s a more important lesson to take from Connolly’s historic election, because Cambridge isn’t always very good about acknowledging the value and seriousness of its activists. Citizens’ questions go unaddressed (recently elected city councillors have actually been good about getting these questions answered), suggestions made during public comment are ignored and the talents of residents go unused. For instance: In appointing members to the city’s most recently formed volunteer body, its Commission on Immigrant Rights and Citizenship, the city skipped over applicants with vast experience, extensive networks and proven effectiveness. It raises questions about what metrics were used to fill the panel’s 10 slots.

Connolly got his share of establishment scorn as a citizen activist – and even during his year as aide to city councillor Dennis Carlone – while fighting to make Cambridge buildings “net zero” on greenhouse gas emissions or for MIT to build housing for its students, instead of continuing to leave them loose to raise private market rents for the rest of us; he was right on both issues, as he was in pointing out how the council had irresponsibly left $3.9 million in “linkage” funds for affordable housing on the table and that Cambridge had already built or permitted more than the amount of housing deemed part of a regional solution to real estate prices, without discernible effect.

Cambridge is filled with smart, accomplished people. Officials have to be better about identifying which should be discounted as crackpots (few, if any) and which should be heard with an open mind. Some could soon be a state representative like Connolly, after all, who enters office armed with the same ideas he had as a citizen. Now, buoyed by thousands of votes, he simply has a bigger voice to make them happen.