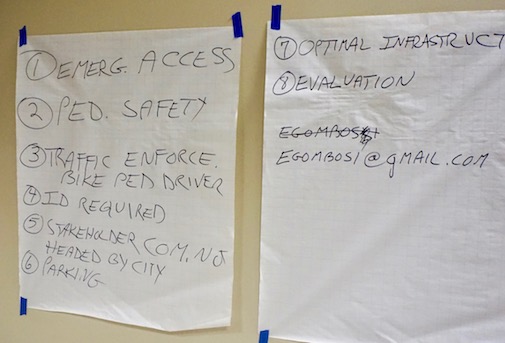 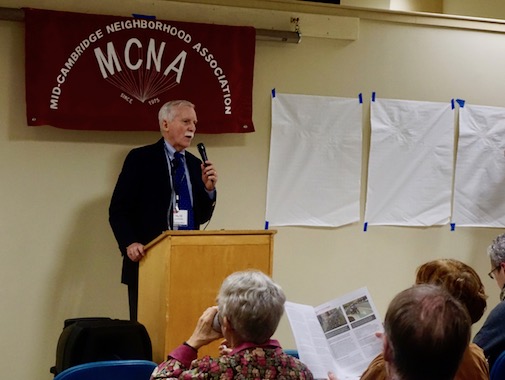 A neighborhood group gathered and voted Wednesday seemingly to form a committee urging city officials to reevaluate and fix recently installed bike lanes it felt weren’t addressing traffic-safety goals. It was similar to the conclusion of a Monday meeting held by a different group.

There was overlap in attendance between the Monday “Safe Streets for All” meeting in East Cambridge and the Mid-Cambridge Neighborhood Association meeting held Wednesday, but Fritz Donovan, the neighborhood group’s presiding officer, said this was “a neighborhood initiative that had been set up before.” More than 60 people attended the earlier meeting; nearly 100 gathered Wednesday at a Spaulding Hospital meeting room, including association members, bicyclists and other concerned citizens.

After many speakers and a near-unanimous association vote to set up a committee, there was little time to discuss how the two groups might collaborate or cooperate in getting more bicyclist traffic enforcement, “revisiting” the installed bike lanes on Brattle and Cambridge streets and playing a bigger role in future installations.

Later, Donovan said that the “MCNA has not determined whether yet another committee is the most practical route to improvement,” and that the committee he’d referred to was the group’s coordinating committee, or board, who will draft recommendations for the city on Dec. 6.

The board, he said, has now been directed to communicate to the City Council and city manager that they must “determine how well [the city’s current program to promote public safety] is achieving the most essential goals of traffic safety; and set in motion remedial changes to serve these goals more effectively.”

If the group decides to form a committee, “we will include that in the letter we draft.”

The “Safe Streets for All” meeting set similar goals of redesigning bike lanes, and both groups wanted the return of parking spaces considered vital for customer access to local businesses.

“Safe Streets for All” wanted a public education campaign “directed at all users of the road to include familiarizing cyclists with use of safety gear such as lighting”; MCNA speakers wanted cyclists to be required to carry identification to show after an accident or if stopped by a police officer, and said reducing speed limits would help make the roads more shareable and safe for all.

Most MCNA themes were familiar from recent City Council meetings as well, including that there hadn’t been enough outreach for differing views before the lanes were installed. Robert Skenderian, proprietor of Skenderian Apothecary on Cambridge Street, said he was not aware of an April 25 public meeting to discuss the bike lane implementation plan until two days before, when a member of the city’s Traffic, Parking & Transportation Department contacted him. Now Cambridge Street has lost more than 100 parking spaces, he said, and elderly and handicapped clients have difficulty getting to his store.

Skenderian and neighboring Darwins Ltd. sandwich shop owner Steve Darwin said their businesses were hurt by the changes, though they did not have numbers to present.

Several people also worried about restricted emergency vehicle access, though police and fire reports and officials haven’t raised the concerns, and bike advocates noted that police and fire officials approve major infrastructure changes to main thoroughfares. Snow removal was a universal concern, and the city in an email admitted it was going to be a “learning process” but was committed to having parking, vehicle and bike lanes cleared throughout the winter.

The “bikelash” is also raising sharpened questions and complaints about whether the deaths of bicyclists Amanda Phillips and Joseph Lavins last year were politicized by bike activist groups to put pressure on the city to more aggressively pursue Vision Zero goals and the Cambridge Bike Plan. Robert Winters, an MCNA member who bicycles, said he “resents the death of individuals used to promote an agenda.” Others called Phillips responsible for her Inman Square fatality, because she was cycling on the sidewalk, then hopped into traffic.

Winters reminded the meeting repeatedly that complaints were about “demonstration” bike lanes on a six-month trial, at the end of which there would be a review of how well they worked.

John Pitkin, former head of the MCNA, recalled during discussion over forming a committee that the city had a Traffic and Parking Committee that, before being disbanded in the mid-1990s, operated on its own authority and had real decision-making power.

This post was updated Nov. 19, 2017, to lower the estimate of attendees at the meeting and correct that business owners may have gathered sales figures, but did not present them.