Kendall Square will get own grocery store, 19,000-square-foot Brothers Marketplace 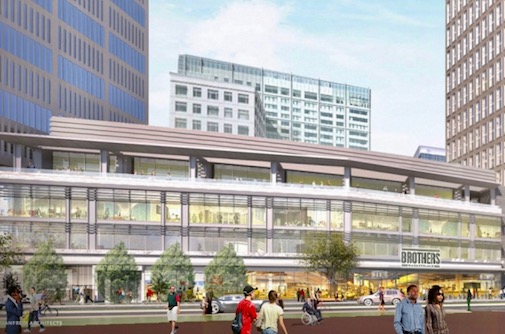 Kendall Square will get own grocery store, 19,000-square-foot Brothers Marketplace

Kendall Square will finally get its grocery store – a 19,000-square-foot Brothers Marketplace that will open in the summer of 2019 at One Broadway as part of a larger construction project by the Massachusetts Institute of Technology.

The institute said it has a fully executed lease with Roche Bros. Supermarkets to create the upscale store. The Wellesley chain, founded in 1952 in Roslindale, has 20 sites already in operation, including its Sudbury Farms concept; there are two other Brothers Marketplaces, in the tony towns of Weston and Medfield.

“The community’s desire for a grocery store was raised in every conversation that we had with stakeholders during our zoning process,” said Steve Marsh, head of real estate for the MIT Investment Management Co., in a Thursday press release from the MIT News Office. He called it “the most requested retail use” of residents, workers and students in the area.

“It is so important to those who live and work in Kendall that we worked to incorporate it in the earliest possible phase of our development,” Marsh said. “We believe that the market will also serve as an anchor for other retail that contributes to a vibrant neighborhood and greater sense of place in the square.”

Residents and workers in the developing square have been calling for a place to get groceries and other household needs since at least 2010, directing their pleas first to the developer Boston Properties and then to the institute. (Residents urged Boston Properties again in 2012 to add a grocery store as it was planning its Ames Street residential tower.)

But in December 2010, as the Planning Board reviewed ideas for 1.1 million square feet of retail, laboratory, office and housing, Marsh said only that he expected the development to host a pharmacy and, while rejecting a supermarket, would consider “an urban grocer.” The Kendall Square Association’s executive director at the time, Travis McCready, also dismissed the need for a supermarket, saying a small grocer would be adequate.

Kendall Square has added households since and is planning for far more, including 300 residential units at One Broadway and 1,400 at the institute’s Volpe parcel, as well as 280 at Boston Properties’ Ames Street building.

While grocers as small as 4,300 square feet were discussed as adequate by McCready in 2011, the Brothers Marketplace that MIT says is coming will be significantly bigger than even the 11,000-square-foot bfresh store that opened in February in Somerville’s Davis Square and a 12,600-square-foot grocery store discussed as part of the former Edward J. Sullivan Courthouse in East Cambridge.

The grocery store will “nod to the legacy of small neighborhood markets from long ago,” according to the institute, and stock local seafood, cheeses and goods such as Iggy’s Bread and Bonnie’s Jams alongside national brands and prepared foods. The market is expected to create about 50 permanent jobs.

“It will be much easier for my family to pick up items that we need, and we won’t have to plan a trip just for basic groceries. This market will mean a lot to the neighborhood,” East Cambridge resident Al Disidoro told MIT. City councilor Tim Toomey said the grocery store would be “be tremendously helpful [and] fill a gap that has existed for many years.”