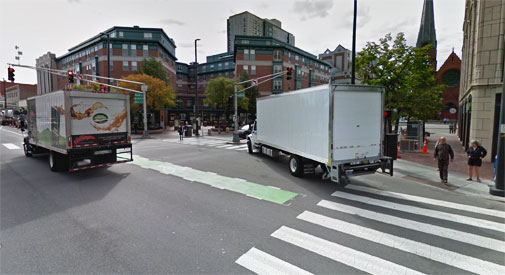 While transportation officials work through plans to handle traffic dangers in Porter and Inman squares, two city councillors are proposing a solution for a three-way intersection in Central Square that’s part of one of the most dangerous stretches of road in the city – but not the site of the most serious traffic deaths and injuries.

An “all-walk” signal for where Massachusetts Avenue meets Prospect and River streets has been proposed for study by councillors Alanna Mallon and Sumbul Siddiqui. They note it’s one of the busiest intersections in the city, and that pedestrians often encounter cars turning right on red there, “even though intersection signage prohibits this action, or vehicles turning right after their light turns green, but before the opposing pedestrian signal turns from ‘walk’ to ‘stop.’”

A change raises environmental concerns – it would keep cars would be idling longer – but was a big topic of conversation at a weekend public meeting about the future of the intersection’s Carl Barron Plaza, Mallon said.

“We’ve heard from many neighbors and residents who work in Central Square that there’s a real desire to have a longer walk signal to get across” the streets, Mallon said Monday. “Many people I spoke with on this issue are parents whose kids go to the the Cambridgeport School and need to cross that busy intersection once or twice a day.”

It’s not the first time the issue has been raised in the council, but transportation officials have pushed back on past requests for “all-walk” signals in Central Square, councillor E. Denise Simmons noted. “Maybe, just maybe this time we’ll get a different answer,” she said, “and I guess if the answer comes back that it doesn’t support it, we push back harder and say that’s not acceptable. Because we really do have to do something about this intersection.”

The all-walk or all-vehicle approach can keep pedestrians waiting for “intolerable” lengths of times, city traffic engineers say. Backups in traffic during an all-walk signal “in an urban environment with congested intersections” is another argument in opposition.

With the city’s Vision Zero plan to engineer roads until there are zero traffic deaths getting an official release this morning at City Hall, police released data for the past year showing a record low number of crashes – the lowest in nearly 20 years. The 2,666 crashes “falls below expectations, even accounting for a linear decline” since 2000 in calls for help resulting from crashes. There were only 276 ambulance trips shown last year as a result of crashes, the lowest figure in 14 years.

A citywide speed reduction to 25 mph was put in place in December 2016, the report notes. Effective March 1, the speed limit will be lowered to 20 mph in the city’s major squares – Central, Harvard, Inman, Kendall and Porter.

“We know that lower speeds help save lives, and that pedestrians and cyclists are much more likely to survive a crash with a motor vehicle when speeds are below 20 mph,” said Joseph Barr, director of the Traffic, Parking & Transportation Department, in a press release. 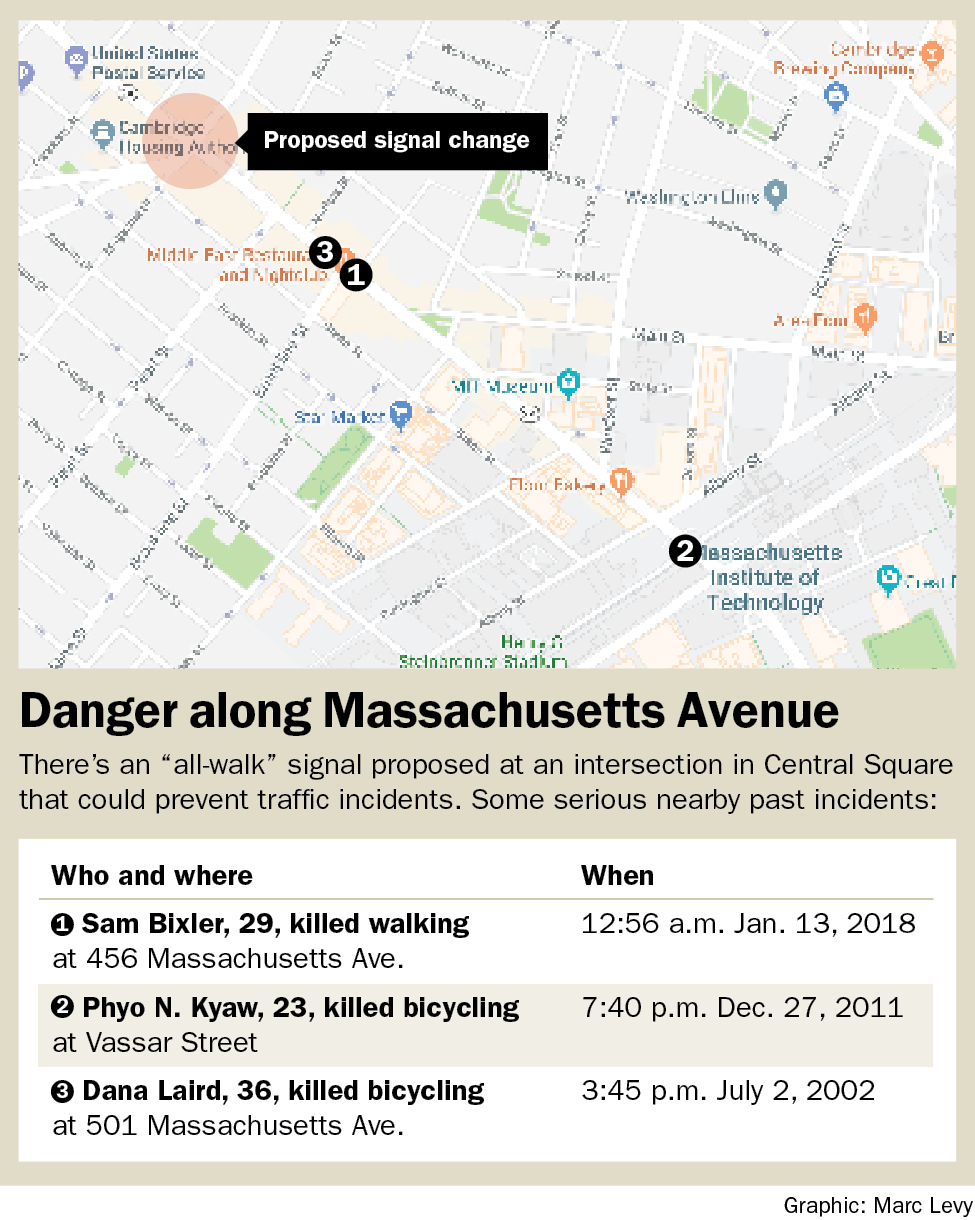 Police say crashes are distributed broadly across the city, but there are “notable hot spots” along Massachusetts Avenue in the Harvard Square area; near Porter Square; around Inman Square; and in the stretch from the Massachusetts Institute of Technology to Central Square, which includes the intersection targeted by Mallon and Siddiqui.

With the entire stretch of Massachusetts Avenue from Vassar Street to Bigelow Street highlighted, the intersection doesn’t stand out for crashes, especially those that require ambulance rides to a hospital. Heat maps show the hottest of hot spots farther down the avenue in the direction of Boston, or farther down Western and River and streets.

There have been notable traffic deaths and injuries in the area, but the intersection itself has not been the site.

Most recently, Sam Bixler, 29, a history teacher at Cambridge Rindge and Latin School, was hit by a car at 12:56 a.m. Jan. 13 as he crossed Massachusetts Avenue near Douglas Street. The driver told police Bixler ran into the crosswalk. He was rushed to Beth Israel Deaconess Medical Center in Boston, where he underwent emergency surgery to relieve pressure from his swollen brain, according to updates on a website created by family to share news. He died Feb. 14.

MIT graduate Phyo N. Kyaw, 23, died shortly after 7:40 p.m. Dec. 27, 2011 at Vassar Street and Massachusetts Avenue, when he was hit by an oil tanker truck turning right onto Vassar. He was on a bicycle.

Dana Laird, 36, a Tufts University graduate student, died from a 3:45 p.m. July 2, 2002, dooring incident in front of 501 Massachusetts Ave. – not far from where Bixler was struck, but still three blocks from the intersection with Prospect and River streets. When a car door was opened just in front of her, Laird lost control of her bike and fell under a bus. “He put the brakes on, but in a split second you couldn’t stop a bus that big,” an MBTA spokesman told The Boston Globe. The driver of the car was cited for opening his door in traffic.

This post was updated Feb. 15, 2018, to indicate in text and the graphic that Sam Bixler had died from injuries suffered when he was hit by a car.