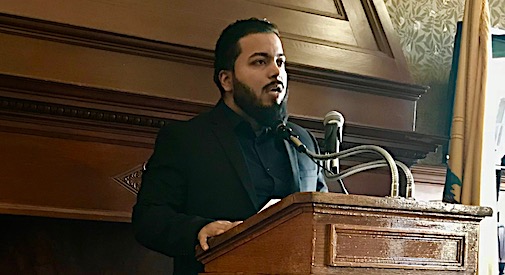 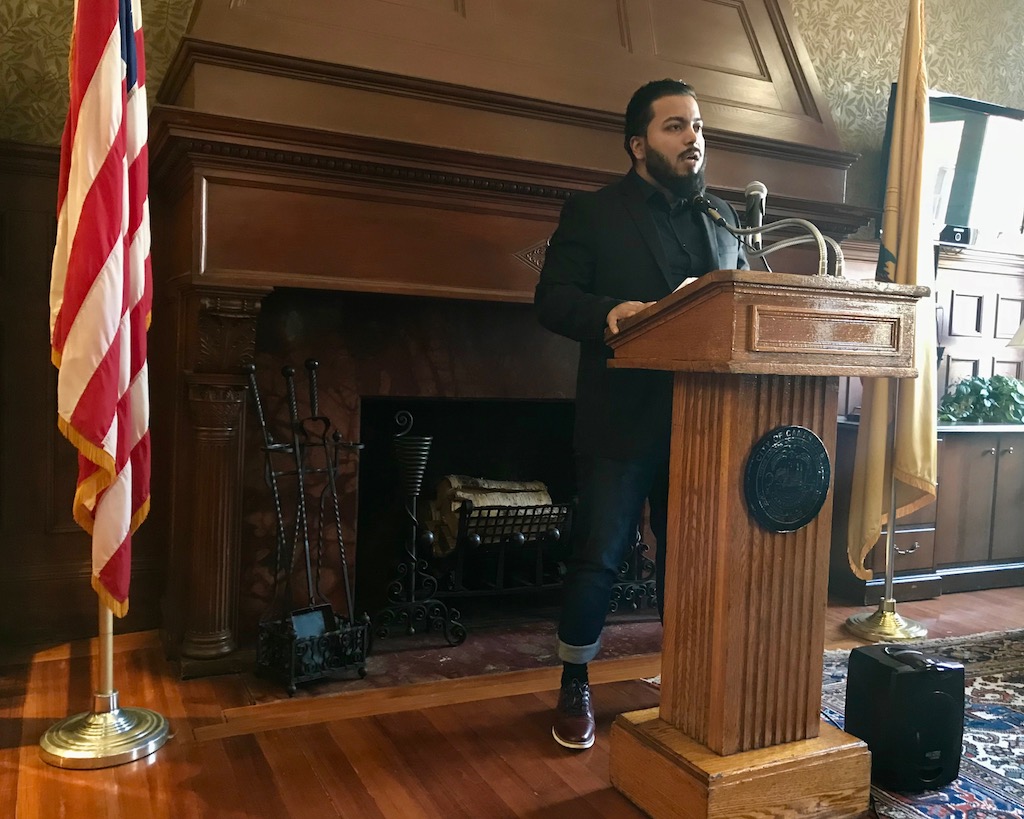 David Mijares, director of Somerville’s Boys & Girls Club, tells his story Monday at the launch of a Cambridge Legal Defense Fund for Immigrants. Mijares has been in the country under Deferred Action for Childhood Arrivals status. (Photo: Marc Levy)

A new Cambridge Legal Defense Fund for Immigrants hopes to raise $500,000 by May 15, then start spending it immediately to defend immigrants suddenly at risk of detention, arrest, prosecution and deportation by the federal government.

The fund was announced Monday by Mayor Marc McGovern in partnership with the Cambridge Community Foundation, inspired in part by previous mayor E. Dense Simmons’ fundraising to help the victims of a December 2016 fire on Berkshire Street. That effort raised a half-million dollars within a few days of the fire.

It’s one of several steps McGovern has undertaken since Donald Trump became president to underline Cambridge’s formal position as a place that welcomes and supports immigrants, including undocumented immigrants.

The city has held sanctuary city status since 1985, “but symbolism is not enough,” McGovern said. “Cambridge must embrace the full meaning of being a sanctuary city by ensuring that our own residents – some of whom have been members of our community, our churches, schools and businesses for decades – are protected from xenophobic policies.”

Policies emanating from the White House have created anxiety not just among undocumented adult immigrants, but among 700,000 “Dreamers” brought to the United States as children (some 8,000 of whom are at risk in Massachusetts) and hundreds of thousands of refugees escaping war and natural disasters in Haiti, Honduras, Nicaragua and El Salvador under Temporary Protected Status.

“Immigration and Customs Enforcement, their officers are everywhere now,” said Leslie DiTrani, an immigration lawyer and member of the city’s Commission on Immigrant Rights & Citizenship, speaking at the Monday press conference. “They used to focus their limited resources on removing people who had criminal records or outstanding orders of deportation or who had recently come to the country. That may not be my choice, but I can understand the rational use of those resources. Those enforcement priorities are now gone. Now anyone in the United States without status is at risk, and the fear is pervasive.”

A resident at risk

One of those people with new causes to fear is David Mijares, director of Somerville’s Boys & Girls Club, who was brought to the United States when he was 7, went to Cambridge Public Schools and has a sibling serving in the U.S. Army in Afghanistan – and yet now lives under threat of deportation.

Mijares had been visiting a friend when his Greyhound bus was stopped and boarded by U.S. Customs and Border Protection agents at around 6 a.m. near Rochester, N.Y. “I saw them just scan the bus and look right at me,” Mijares said. When he acknowledged that he didn’t have citizenship papers, the agents took him to a jail – holding him for days while his family tried to get together $5,000 bail – and then to court in Buffalo, where a judge refused to transfer his case to Boston.

“I was exploring my options and preparing for my departure from this country. My list of where to go included places I’ve never been before, or barely knew. It isn’t easy to smile, shake hands or set meetings while the ground is crumbling beneath your feet,” Mijares said. “No one ever reaches you to say goodbye to something you don’t want to leave for something you don’t have a plan for.”

For the moment, a court order protects People with Deferred Action for Childhood Arrivals status such as Mijares from deportation, and his case is under “administrative closure” – meaning the federal government isn’t acting on his case, allowing Mijares to undertake a months-long process of renewing his work authorization.

“For me that’s not enough time. This upcoming March 16 may be my final day as director of the Boys & Girls Club of Somerville,” he said. “I’m hopeful to resume my role once my situation has cleared, but nothing is promised.”

Mijares said he usually shies away from the spotlight, but he supported the Cambridge Legal Defense Fund for Immigrants’ work to improve the chances of people such as himself by securing legal help. “I’m tired of the limbo my life is in,” he said.

“Cambridge will stand with you” 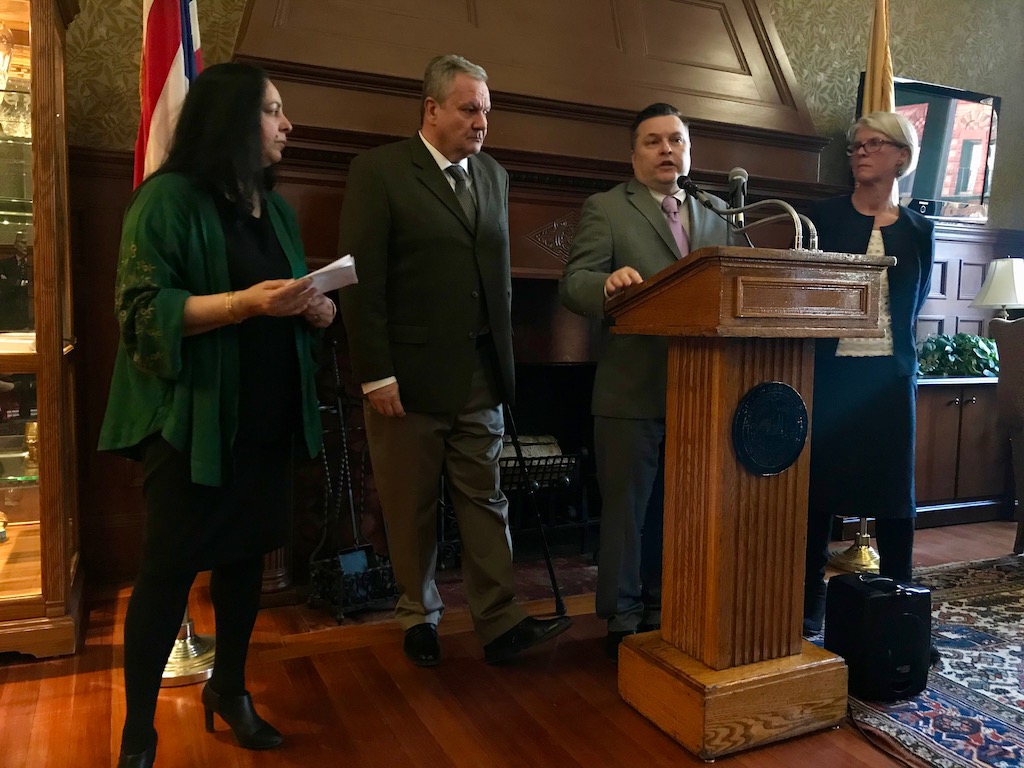 Cambridge Mayor Marc McGovern speaks at the announcement of the defense fund, with Geeta Pradhan, president of the Cambridge Community Foundation; Emmanuel “Manny” Lusardi, liaison for immigrant affairs to McGovern; and Leslie DiTrani, an immigration lawyer and member of the city’s Commission on Immigrant Rights & Citizenship. (Photo: Marc Levy)

The fund launched with about $50,000 already in place – half from a donor who redirected previously committed money when learning of the new designation, half from the Cambridge Community Foundation itself.

“This approach is supremely and essentially Cambridge,” said Geeta Pradhan, president of the foundation, making an explicit connection between the approach and response around the Berkshire Street fire fundraising as “the phenomenal example of Cambridge’s generosity in full swing, when people gave from $5 to $5,000 and even more because they cared about their community, because they wanted to reach out and make a difference in someone’s life. This is very similar to that.”

Like other speakers at the event, which was attended mainly by media, city staff and the mayor’s fellow city councillors, Pradhan said she’d been disappointed by the nation’s turn to hate and the “atmosphere of fear and distress” that had been whipped up, but energized by the promise of the fund. “We don’t have time to lose,” she said. “People are losing their families, they are being torn apart. We need to do something, and we really need to act now. I’m here to tell you to open up your hearts – and open up your wallets.”

Tax-deductible donations can be given by checks payable to the Cambridge Community Foundation for Cambridge Legal Defense Fund for Immigrants at 99 Bishop Allen Drive, Cambridge MA 02139; at the foundation website or on a GoFundMe page.

“To those impacted by the destructive actions coming from the White House, I want you to know that Cambridge respects you, Cambridge values you and Cambridge will stand with you every step of the way in this fight,” McGovern said.