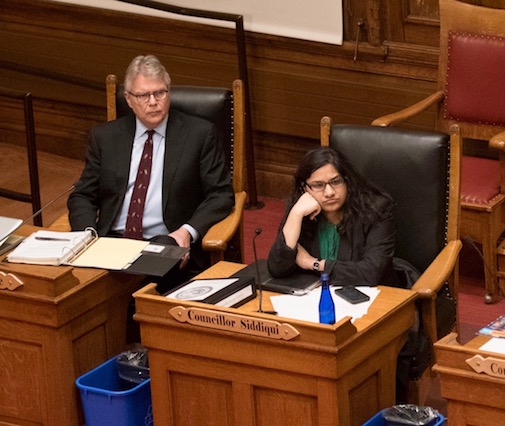 City councillors Dennis Carlone and Sumbul Siddiqui supported a right of first refusal proposal for tenant unit purchases despite a flood of negative public comment and critiques by their peers. (Photo: Ceilidh Yurenka)

A bid to ask the city to draft a right of first refusal law for tenants to buy their units was defeated Monday after a flood of public comment. Nearly 40 residents came to speak – several for the second or third time, as the proposal has taken weeks to come to a vote – and nearly all were property owners who opposed the idea.

The notion appeared before the council first Feb. 5 as support for a state bill that would let Cambridge and other communities write their own versions of how the rules would be applied. When that bill by state Rep. Denise Provost died in committee, city councillor Dennis Carlone acted on a request by Provost to propose a Cambridge home rule version, like Somerville and Boston would be doing, to “to get the state to look at it more seriously,” he said.

“I’m saddened by some of the misunderstanding – I understand the fear, but I’m saddened by it,” Carlone said, shortly before seeing the proposal go down 3-6, with Carlone and councillors Sumbul Siddiqui and Quinton Zondervan in favor.

Councillor E. Denise Simmons had her name removed from the order before it was voted on, saying she supported the intent, but not the approach the order took.

That the process seemed to divide residents was remarked on several times throughout the night by people on all sides of the issue. Even obvious stakeholders such as the nonprofits Homeowner’s Rehab Inc. and Just-A-Start hadn’t been consulted.

At first, the order faced the complaint of being too vague; after Simmons used her “charter right” a week ago to bump discussion by one meeting, Carlone submitted Somerville’s version of the legislation as a starting point for discussion. But that brought on new problems as property owners found more specifics to dislike, including one rule that before selling a vacant unit, the owner must track down tenants who’d lived there in the previous 12 months.

The dozens of residents and representatives of groups such as the Small Property Owners Association who disliked the bill cited many reasons for their opposition, ranging from potential delays the law could cause in sales being undertaken on an emergency basis to the risk it would prevent them from getting the most money possible from a sale meant to fund a retirement or other family needs. A few of the complaints persisted even after having been addressed in previous meetings.

A common theme among opponents was that a right of first refusal was a bad idea, and that there were better ideas out there if councillors and other city officials would apply themselves – perhaps by forming a six-month task force – to coming up with them. “This is an opportunity for the city to truly tackle the housing crisis that we all like to talk about and never do anything about,” said architect George Metzger, a former president of the Central Square Business Association. “It’s an opportunity for the city and the council – this new council – to take a strong action on a process that addresses the entire problem, and not just parts of it.”

But Carlone and others argued that discussing a tenant’s right of first refusal to buy their unit was exactly that – one possible tool in tackling a housing crisis in a city where there was no magic single solution that would do it. “We’re not going to build our way out of the problem,” Carlone said. “We’re 20 to 30 years too late. We need to look at existing inventory.”

The phenomenon of residents who speak of the need to fix the housing crisis in Cambridge but reject any currently offered solution is not new; the housing group A Better Cambridge is among those nationwide who have called it out in the past and answer it by embracing what’s called “Yimbyism” for a “Yes, in my backyard” approach – though specifically and only by building new homes. In this case, it was a group often considered A Better Cambridge’s opposite in town, the Cambridge Residents Alliance, who came out in support.

Nancy Ryan, a leader of the group, said she was disappointed by the “atmosphere” resulting from opponents’ comments but agreed a community dialogue was needed.

“I come here very often and attend a lot of other meetings [about supporting] as much affordable housing and stability in our housing as we can possibly get,” Ryan said. “I look around the room and I don’t see a lot of you all here at those meetings.”

Ellen Shachter of Cambridge and Somerville Legal Services pointed to large buildings now being bought by larger owners and resulting in displaced tenants, such as on Seventh Street, that might have been transferred differently if a right of first refusal bill had been in place.

“If every single time we look to anything that involves intervention in private-market forces it’s considered too radical, that we’re not able to talk about it, that it’s all rent control, we will not have solutions,” Shachter said. “We cannot stabilize this community without intervention in the market.”