Some of the steps the city plans to take against climate change in the Alewife neighborhood and, in some cases, citywide. (Image: Alewife Preparedness Plan)

The city says it is planning for worst-case climate change projections, including a tripling of days over 90 degrees in temperature and daylong floods that might trap people at their offices, but some officials and residents are pushing for even more ways to ensure construction that is safe 50 years from now and even helps prevent environmental disaster.

The City Council turned its Monday meeting into a roundtable looking at a climate plan focused on the Alewife area, which is flood-prone and has the least tree protection to ease extreme heat; the agenda for its next regular meeting is expected to include a citizen zoning petition that would require all large development to follow tougher climate standards.

The petition “puts common-sense protections in place that will make buildings safer and better protect residents,” said petitioner Mike Nakagawa,  noting that extreme heat days are expected to start having a significant impact on public health within the next 10 years.

A table in the city’s Alewife Preparedness Plan packet showed that the number of summertime extreme heat days that were seen in 2000 could roughly triple through 2044, and leap again – to 68 from 11 – as soon as 2055, making for longer and more dangerous heatwaves. An “urban heat island effect” resulting from a lack of trees and other green space can add what feels like another 10 degrees to the temperature. 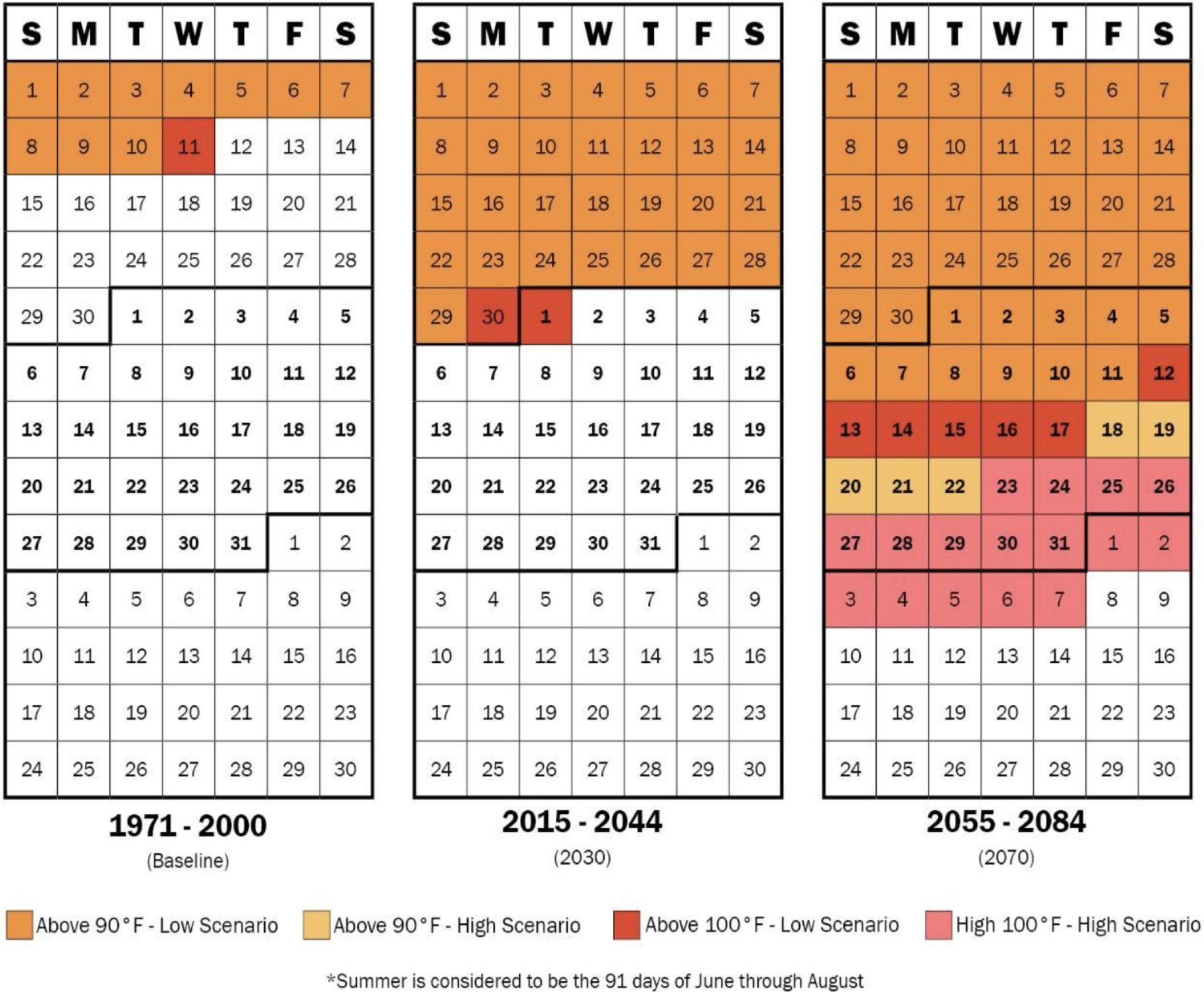 Cambridge already experiences flooding along Alewife Brook and in The Port neighborhood as a result of rain, and “precipitation is already becoming more intense,” said John Bolduc, the city’s environmental planner. “If no action is taken, this kind of flooding will become extensive, deep and more frequent.”

Flood worries don’t come just from so-called 100-year storms – those with a 1 percent chance of happening in year, but known to be becoming “more frequent and more extreme,” Bolduc said – but from sea-level rise held back by the Charles River and Amelia Earhart dams. But the Mystic River’s Amelia Earhart Dam, located by Assembly Square in Somerville, is at risk of failing around 2045 without improvements. (A Somerville climate change vulnerability assessment says 2035.) A regional group’s first attempt at grant funding that included a fourth pump at the dam was rejected by the federal National Oceanic and Atmospheric Administration, but Bolduc said there will be second try.

What the city wants to do

In addition to regional efforts, the city is preparing on its own for the effects of climate change. The Port neighborhood is next up for a study. Expected to be finished by September, the study will be combined with the work in Alewife to pin down citywide climate change response, likely dovetailing with the rollout of the Envision Cambridge citywide master plan. “Truly the fact that we’re doing this work at the same time as we’re doing the comprehensive plan is a huge silver lining,” said Iram Farooq, assistant city manager for community development.

Yet the neighborhood is already getting a $35 million to $50 million flood control project over the next five to seven years that includes the installation of two giant underground storage tanks that will only minimize flooding, not prevent it outright. Citywide, Bolduc said, “we probably can’t build enough new flood storage or big enough pipes to prevent flooding entirely. We can reduce risks, but we will likely have to plan for living with some flooding.”

Construction will increasingly use flood-resistant materials and add exterior flood walls and backwater valves, in the vision described Monday, and utilities and other infrastructure will be raised above expected worst-case water levels. Vegetated berms are already being raised around the Fresh Point Reservoir to protect the city’s water supply. Parking lots will likely be paved with porous materials, and more urban forest will be planted to absorb water. Businesses may be asked to include space for sheltering people when floods last a day or longer, Farooq said, with thought being given to extra generators.

To deal with heat, sidewalks and roofs will be lighter and alive with plants and the city will have to build neighborhood “resilience hubs” to unite and protect residents as well as think about where people can go to stay cool, with extended use of indoor pools and expanded library hours among the possibilities.

“We have a long history of looking at the potential impact of climate change and seeing how we can adopt and implement policies. My first month in the job I went to the Metro Mayors Coalition, and of the 15 members, Cambridge was well ahead of the game,” City Manager Louis A. DePasquale said. “I can tell you how proud I am of how seriously we take this and how far we’re ahead of everybody else. When we talk about flood risks in Alewife, we’ve already started to make developers address this. That’s how you make this work.”

Some city councillors wondered if planning was keeping up with the changing realities of climate change. Putting a chain-link fence around Jerry’s Pond in North Cambridge won’t keep the contamination from spilling out during flooding, Dennis Carlone said, and environmental expert Quinton Zondervan worried about the ability to evacuate residents when weather in the Northeast takes on attributes of Southern weather over time – including a hurricane season.

Mainly, though, Zondervan worried there were “inherent and obvious tensions between more buildings and more green infrastructure,” and about tying quickly expiring climate estimates to zoning that defines construction of buildings that will be in place for the next 50 years.

City officials assured him essentially that the math works out – that developers’ addition of green infrastructure and storage tanks at the behest of planners was a net win, and that with climate not expected to see a major “flip” until midcentury, Cambridge had a margin of error in which to adjust its demands. Bolduc left it vague during the meeting, saying goals had been set “using projections about what climate might look like that at the time were worst-case,” and referred also to the possibility that help would come from nations following the Paris climate accords. But few nations are even close to following Paris guidelines to keep down greenhouse gas emissions.

Bolduc clarified later. “For planning purposes, we have assumed the worst emissions trajectory, basically using the trends that were projected before Paris. So I still feel comfortable with those projections,” he said, while noting that “we don’t know everything about how the future is going to play out. There are positive things happening. The rate at which green energy is [being adopted] is strong, and MIT is working on bringing fusion to the market in 10 years – they have a $30 million investment in that, and there are other ventures doing commercialized fusion as well. We plan for the worst, and we’re hoping for the best. ”

The resident zoning petition likely to be heard April 23 urges setting protections now, including growing the Flood Plain Overlay District zoning to anticipate climate change, incorporating stronger design requirements for construction and implementing a “Green Factor” score to encourage developers to build greener and cooler. The system is used in Seattle and Washington D.C., awarding points for adding such as things as trees, green roofs and vegetated walls.

“We don’t want to wait for the city to not do enough. It’s time to act,” said Mike Nakagawa, a petition author and member of the Envision Cambridge Climate and Environment Working Group and an Climate Preparedness focus group in Alewife. “We’ve known about things in the past and not seen them translate into anything. Back when the Concord-Alewife study was done there were no changes to the floodplain overlay district in terms of performance standards for the buildings.”

Developers also face weak controls when it comes to complying with floodplain rules, Nakagawa said, and city attempts at toughening the rules “are more [like] suggestions. It’s not codified.”

Sitting through the Monday roundtable, he said he didn’t see how any of the issues raised were sure to be addressed. “Nothing is implemented through that plan. They’re just raising issues. Now how do you translate those concerns into action?” he asked. “We want to make sure that we address the issues we care about with specific requirements in the zoning and not leave a lot of vague statements that can be interpreted in a lot of different ways.”

The resident zoning petition can be read here.