Let’s talk about the Domino’s pothole program as ‘Paving for Pizza’ fills in for city hall, literally 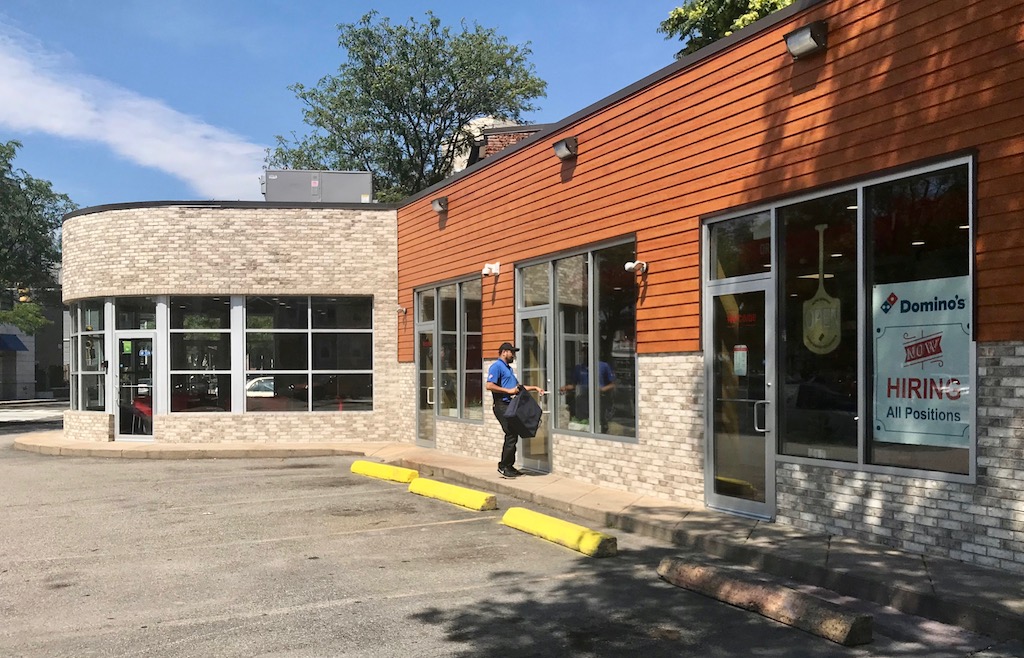 Let’s talk about the Domino’s pothole program as ‘Paving for Pizza’ fills in for city hall, literally

Domino’s Pizza in Davis Square, Somerville, prepares for reopening as an expanded siite with space for sit-down dining as well as delivery services. (Photo: Marc Levy)

Domino’s Pizza has gone from being fodder for stand-up comedy (back when its pizzas had a half-hour delivery guarantee) and liberal outrage (back when founder Tom Monaghan supported Operation Rescue, which fought abortion rights) to a company with a revamped look and mission that now drives discussion over municipal infrastructure.

No, really. The company has a program called Paving for Pizza that fills in potholes around the country – sometimes branded with company colors – because communities can’t afford to on their own and because “potholes, cracks and bumps in the road can causes irreversible damage to your pizza during the drive home,” according to the program’s website.

The site has a “nominate your town” button and shows some of the work, including the 40 potholes filled in Milford, Delaware. “We appreciated the extra Paving for Pizza funds to stretch our street repair budget, as we addressed more potholes than usual,” said the the office of Milford City Manager Eric Norenberg in a quote on the program website.

“This feels like something from a William Gibson cyberpunk dystopia novel, where the government has become so weak and useless, private corporations have been taking over the basic upkeep of the nation. But it’s not a William Gibson novel, there’s no plucky protagonist with some sort of cybernetic implant,” said Jason Torchinsky on the website Jalopnik. “It’s just America in 2018.”

There’s been no pizza-funded paving locally, but the Boston Austrian Economics group thinks the program is fascinating, and plans to explore it from 7 to 10 p.m. Wednesday at the Legal Sea Foods at 301 Great River Road, Assembly Square, Somerville.

The “feast of national media” for the road-repair grants of up to $5,000 cited by CityLab’s Andrew Zaleski doesn’t tend to note what else is going on with Domino’s: The company that made its name with delivery is increasingly inviting people to sit and eat right where it cooks. The  Domino’s at 201 Elm St., Davis Square, Somerville, closed down its garish red, white and blue delivery site, took over the space of the neighboring mom-and-pop shawarma place and turned the entire facade all earth-toned, with friendlier wood and faux brickwork. The rounded portion that was once a pickup-only counter is now filled with cheap formica tables and seating – perfect for people looking to soak up a night’s worth of alcohol with some hot, greasy pizza. Now hiring.