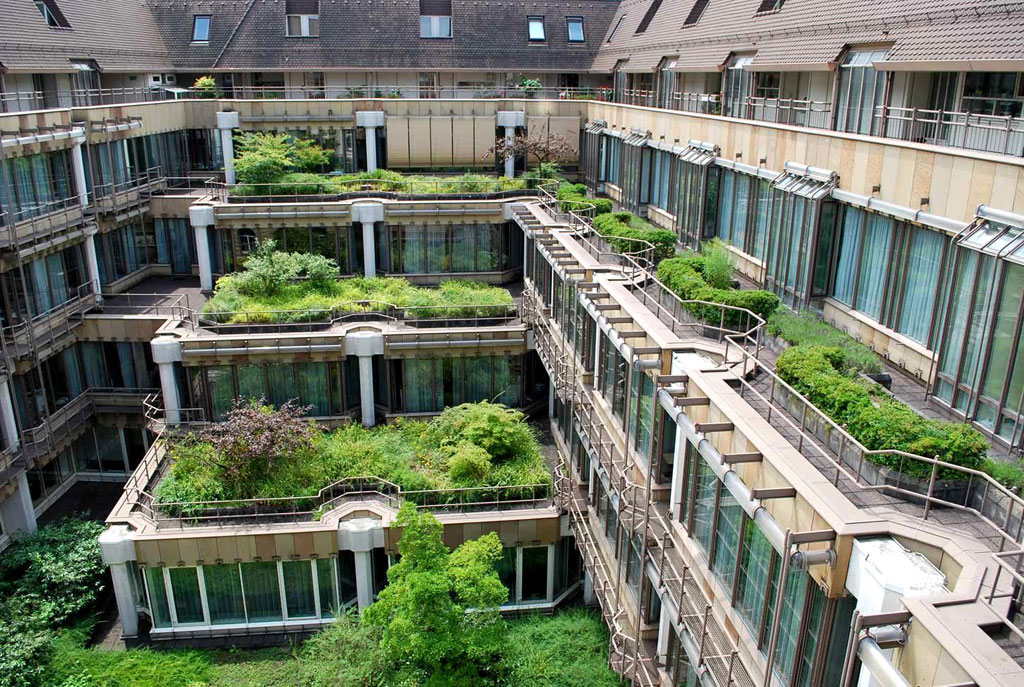 Green projects such as at this finance firm in Stuttgart would have been encouraged by a citizen petition that was killed Monday by a City Council vote. (Photo: Green Roof Service LLC/Green Roof Technology)

Even carefully organized matrices of options prepared for the mayor by two city departments didn’t provide clarity Monday about how to handle a citizen petition about construction that prepares for climate change, and things were only complicated by a letter from the Cambridge Housing Authority about whether the petition could remain alive without risking the rehabilitation of 300 decaying units of affordable housing called Millers River.

But at the end of nearly an hour and a half of dizzying, circular debate, which included a several-minute recess so lawyers and the city clerk could coordinate advice to the City Council, the “green factor” zoning filed by residents Mike Nakagawa and Doug Brown failed 4-5, a “negative action” that means no similar zoning can come back for consideration with the next two years.

Update on July 31, 2018: City councillor Quinton Zondervan, who tried but failed to “charter right” the petition vote until the next council meeting, said Tuesday that he has filed for reconsideration of the 4-5 vote. “My only goal in filing for reconsideration is to preserve the council’s ability to act on the urgent climate safety issues raised in the Brown petition through zoning. I hope the council will agree that this is the best way to proceed,” he said.

Update on Aug. 1,2o18: Zondervan sent a statement that he was informed by the city clerk that he was not eligible to file for reconsideration on Monday’s climate safety petition vote because the council rules say only a member of the prevailing side can file reconsideration. “After reviewing the rules, I have concluded that the clerk is correct,” he said. “I’ve been told the city solicitor will be making a statement that will hopefully provide more clarity on this. While I’m disappointed by this outcome, I look forward to working with my colleagues, the administration and the petitioners on finally considering the items in the petition in detail, and moving them forward through the new advisory committee being created by the mayor and city manager in response to councillor [Tim] Toomey’s policy order. Onward.”

In an example of the night’s utter confusion, councillors took a preliminary vote and suddenly realized they weren’t sure if they’d just resolved the entire issue. “So that’s it?” Mayor Marc McGovern said, drawing a clarification of a confusing affirmation from the city clerk that led into the recess to pin down what vote might be next.

A custom chart by the clerk showing possible actions and their outcomes was ultimately incomplete.

If the petition remained in place – and theoretically it could still come back, as a vote to keep Monday’s decision from being reconsidered failed 5-4 (it needed to be 6-3) – it would have compelled conversation on such things as telling developers of certain projects how much tree canopy, open space or ecological innovations they needed to include to help deal with increasing flooding and extreme heat; setting parking requirements and building height to make up for having to raise structures over floodwaters; demanding that emergency plans and infrastructure be prepared; and creating a “green factor” score to encourage developers to aim high in complying with the proposed zoning.

With the petition killed, those conversations will still happen elsewhere, such as in the Envision Cambridge citywide master planning process, McGovern said. The Community Development Department provided him a chart showing that the ideas in the citizen petition weren’t unique; and a policy order from councillor Tim Toomey passed Monday calls for McGovern and the city manager to create an advisory committee on the same topics that will report back within 90 days.

But there was grumbling in the audience that city staff had to be dragged into every ecological effort underway, from net zero emissions construction to its new Urban Forest Master Plan Task Force and even Envision Cambridge itself. In 2013, a citizen-written light ordinance failed by one council vote and was turned into a city-run but business-focused lighting task force that botched its work so badly that in 2017, a despairing councillor said the city would be better off going back to the original proposal.

Some councillors also worried about a lack of municipal urgency to put environmental protections in place as buildings continue to go up citywide – especially as McGovern made clear that behind Millers River comes the 14-acre Volpe project in Kendall Square, where the Massachusetts Institute of Technology’s development arm has also expressed concerns about the financial effects of the citizens’ environmental zoning.

Developers need certainty to go ahead with projects, McGovern and Toomey said.

“The reason not to kill this is because there is another uncertainty and another risk – that we do not aggressively meet the goals of this petition,” vice mayor Jan Devereux said. “If we’re just going to say, well, every development project could be at risk if this petition hasn’t been solidly killed … that puts a whole lot of trust that what’s on this [Community Development Department] matrix is really going to deliver.”

“These things are being discussed,” councillor Quinton Zondervan agreed. “They’ve been discussed for decades.”

The petition “adds urgency,” he said, noting also that developments such as Millers River and Volpe were always at risk from citizen-filed zoning petitions, which have the potential to immediately freeze projects seeking permitting. Yet in this case Millers River was not in jeopardy for its millions of dollars in funding because the funding wasn’t being sought until after a permitting process that would last into September; so long as the council didn’t act on the petition through that time – and it basically could not, because this is the only council meeting of the summer – the petition could stay alive but ignored without “negative action,” preserving its potential. (Nakagawa and Brown told the council that they were prepared to withdraw the petition, killing it, if Millers River was truly at risk.)

In rejecting that possibility, councillors such as E. Denise Simmons and Sumbul Siddiqui said bankers and investors could not be trusted to understand that the petition was locked up in committee. “I don’t want to send a message to funders that we’re not supporting affordable housing, and that may be what they walk away with,” Simmons said.

The fear arose from an interpretation of a letter sent by the Cambridge Housing Authority’s executive director, Michael J. Johnston. Councillors spent a lot of time Monday quoting, analyzing and debating its passages, with lawyer Siddiqui drawing one meaning and the lawyer across the room, councillor Craig Kelley, drawing the opposite meaning.

The obscure text irritated Kelley. “I really wanted a yes/no answer – if this is kept alive, will it negatively impact funding for this project? And we got a novella in response,” he said. “If people are unable to give clear answers to clear questions, I don’t know why that’s on us.”

Councillor Dennis Carlone, meanwhile, noted that materials requested as long as a month and a half ago hadn’t reached the council until that day, answering new requests by the mayor. And Johnston’s letter left him beyond irritated.

“I’ve never seen such a weak, indecisive letter on a development project. That’s the dilemma we’re all in – we’re making assumptions based on something that’s not clear,” Carlone said.

The votes killing the citizen petition by declining to pass it to a second reading were by councillors Alanna Mallon, Siddiqui, Simmons, Toomey and McGovern. The votes to keep it alive were by Carlone, Devereux, Kelley and Zondervan.