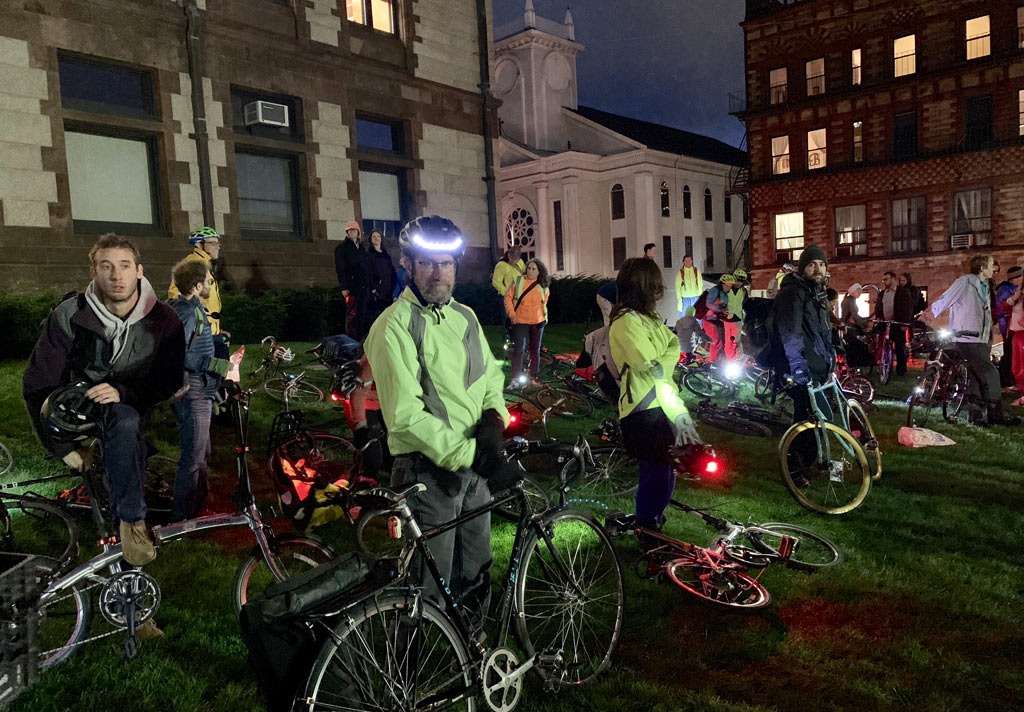 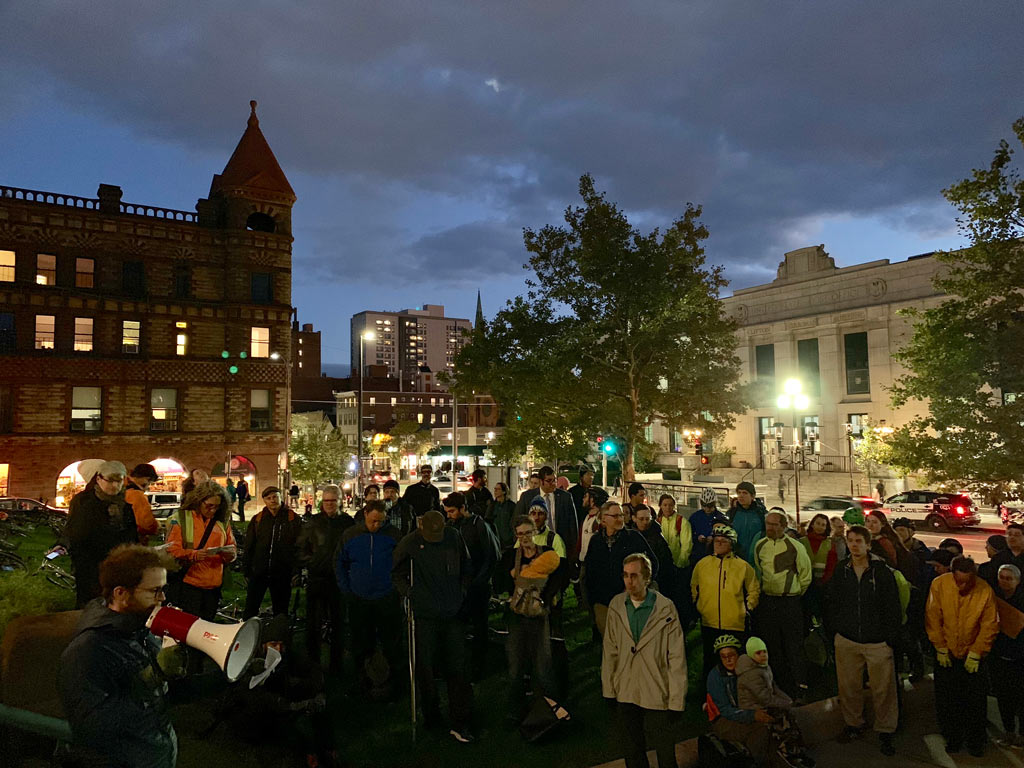 The Cambridge Bicycle Safety Group organized a bike rally Wednesday on the steps of City Hall to urge faster progress in the installation of protected bike lanes – asking the city to follow its own 2015 Bike Plan, which it interprets as calling for a 20-mile bike network by 2023 with just around five miles of lanes in place and only a half-mile more planned for the fall.

The plan is not on track, said one of group’s organizers, Nathanael Fillmore.

The city, though, differs with the group’s interpretation.

“The 2015 plan details an aspirational concept [but] does not indicate a specific numerical goal for the amount of miles of protected bike lanes across the city. It is intended to be a guide and reference for long-, medium- and short-term infrastructure projects,” said Bridget Martin, communications manager for the Community Development Department, in a Wednesday email.

“We are planning to start an update to the Bicycle Plan this fiscal year to include a more detailed implementation plan, taking into account recent experience with quick-build projects, input from community stakeholders and available funding,” Martin said.

Those experiences have been mixed. Lanes in Harvard Square and on Cambridge Street have drawn loud opposition from some businesses and residents. On Monday, while appropriating $5 million to redesign traffic flow in Inman Square, where cyclist Amanda Phillips died in 2016, city councillors were still hearing objections from people who thought the changes were about Phillips. Mayor Marc McGovern felt it necessary to send a tweet clarifying that she was killed after the redesign process began.

Reaction to the push for bike lanes after the death of Phillips and others included complaints of “bicycle bullies” and even its own term: “bikelash.”

Bikes were laid on the lawn to help illustrate the average 160 collisions involving bicycles seen annually in Cambridge.

The Bicycle Safety Group, which formed in the wake of Phillips’ death, remained focused on safety Wednesday. Bikes lay on the lawn at City Hall to represent the 160 bike collisions in Cambridge annually over the past 10 years, according to police data. The group says 40 percent of the incidents could be prevented with the installation of protected bike lanes, but just 1.2 miles of city bike lanes are in that category, mostly along Massachusetts Avenue immediately south and north of Harvard Square, and on Cambridge Street between Inman and Harvard squares.

The rally also boasted a marching band that bent popular tune lyrics into anthems about protected bike lanes, and saw about 140 bicyclists, activists and supporters gather to hear speakers including city councillor Quinton Zondervan and state Rep. Mike Connolly, who each pledged support for improved bike safety and infrastructure.

Vice mayor Jan Devereux, who could not make the rally, had a supportive statement read pointing to a Nov. 27 public hearing to discuss progress on bike infrastructure, including the next steps in creating a protected bike network and other infrastructure improvements.

A “micromobility” conference coming Nov. 3 to the Massachusetts Institute of Technology could be another source for ideas, councillor Craig Kelley said. The five-hour event, “Transportation Transformation: A Conference About the New Urban Mobility,” is co-sponsored by Kelley and includes Joseph Barr, director of the city’s Traffic, Parking & Transportation Department, among other experts.