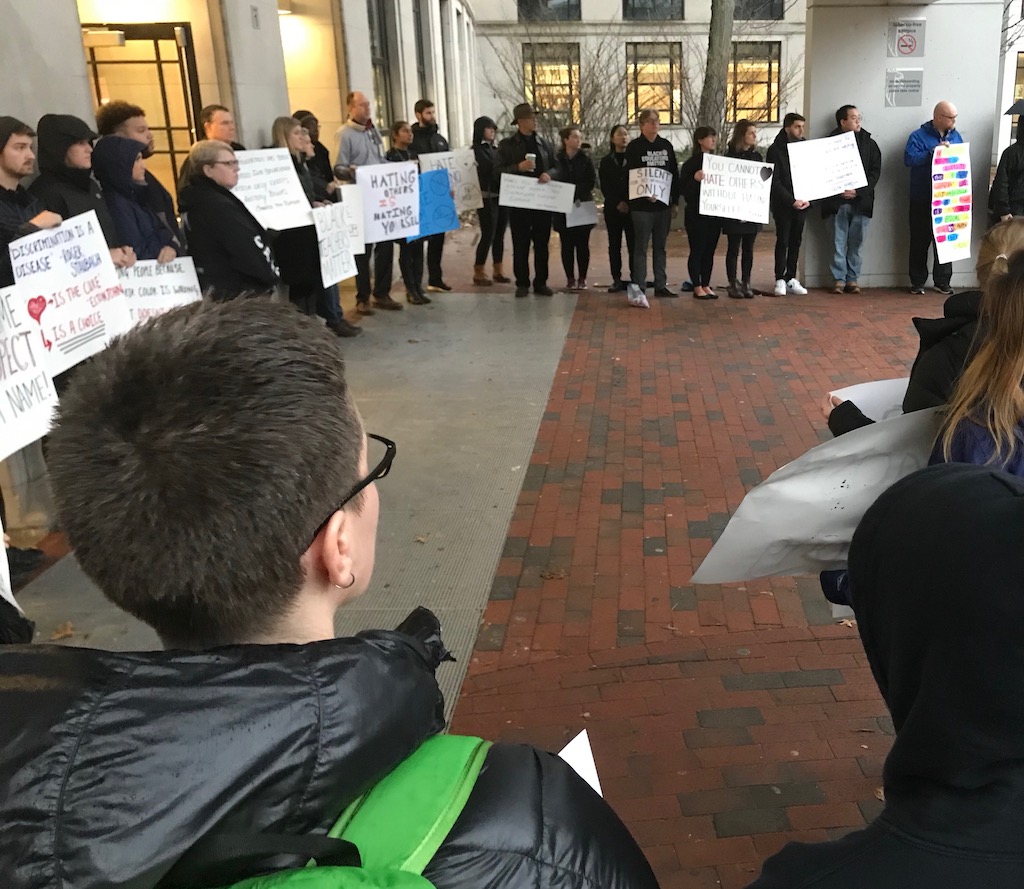 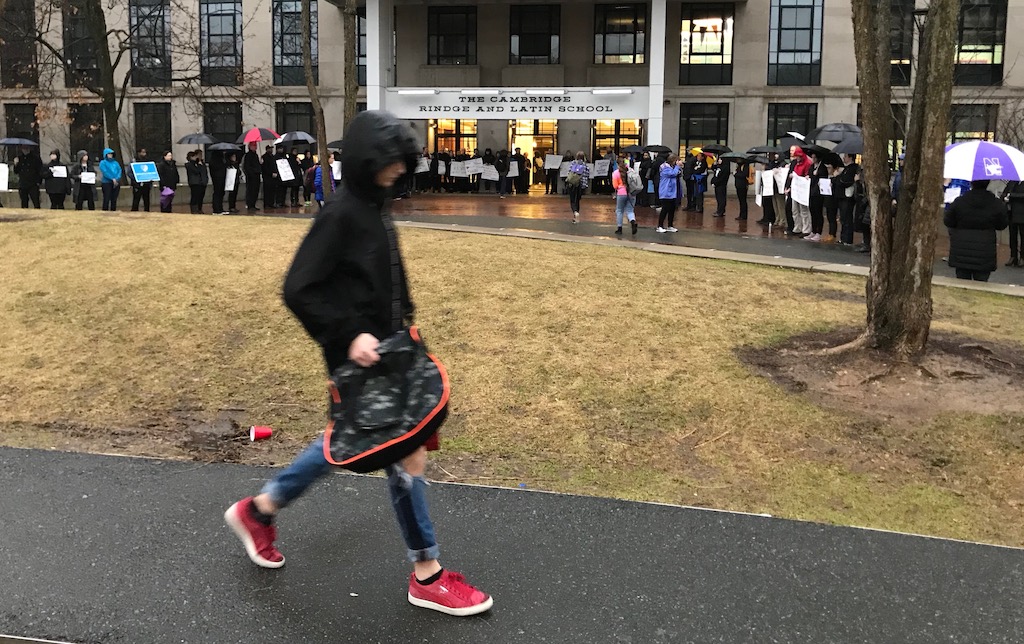 Educators and others line up Friday at Cambridge Rindge and Latin School for a silent protest against racism following a flurry of racially charged incidents. (Photo: Marc Levy)

The final day of high school before the holiday break began with a 7:30 a.m. Friday silent protest against racism, with some 150 educators, students and others lined up at the main entrance to Cambridge Rindge and Latin School, most wearing black and many bearing signs with messages against hate.

It was the second day of silent protests organized by the Educators of Color Committee at CRLS, and it followed the departure of an English-language arts extended-term substitute teacher “citing experiences with racism among the reasons for her decision to leave before the end of the semester,” according to an email to parents from principal Damon Smith.

The teacher was upset by a “racially charged” letter from a student, a school official said – an incident that followed and was separate from a “note containing a racial slur and nonspecific threat” to a teacher of color Dec. 12 that was reported to police. That hate speech incident followed the discovery of a swastika formed of spittle on a stairwell window at the school Dec. 7.

The silent protest Friday was gathered around the main entrance to the high school. (Photo: Marc Levy)

After the incidents, Smith promised the community that time would be set aside Dec. 13 “so that we can engage in a Community Conversation about our core value and motto word, ‘respect,’” though that time was devoted to a generic slideshow prepared far ahead of time and unrelated to hate speech called “How successful is CRLS in living up to its motto/core value of ‘Respect’?” It dealt with harassment and sexual harassment and even delved into sexual violence. Some teachers added the previous hate incidents to the conversation while presenting the slideshow, district communications manager Rosalie F. Rippey said Monday.

Last month, the School Committee heard from students and others about the occasionally racially charged atmosphere at the school, with teacher and Black Student Union adviser Kevin Dua testifying about vandalism directed at their work and a white teacher calling him an “N-word”; the previous time the school saw a flurry of racist and anti-Semitic incidents was in 2016, when Donald Trump ran for and was elected president. Officials haven’t commented on the potential causes for the current spate of hate speech.

Smith – who said he too would be standing silent for a half-hour Friday as part of a phalanx spreading outward from school doors, among School Committee members Patty Nolan and Emily Dexter; Ramon deJesus, the district’s director of diversity development; election commissioner and former city councillor Larry Ward; and many others – said the two days of protests were “to stand against intolerance, racism and hate within the halls of our school.”

He had encouraged the participation Friday of “anyone who has experienced incidents of harassment or discrimination due to any aspect of their identity to please come forward so that we can take action to end this type of behavior in our school.”

“I will do everything in my power to keep our school safe and uphold our values of opportunity, diversity and most importantly, respect,” Smith said, pointing students to an incident-reporting system (explained on the school’s website) inspired by “the advocacy efforts of the Black Student Union and many others.”

At the end of the half-hour Friday, as more students began streaming through the lines of protestors, organizer Ed Walker, a guidance counselor and part of the Educators of Color Committee at CRLS, told participants “This is not the end. This is just the beginning.”