Praise for response to fire, care for victims, contrasting with lack displayed after flood 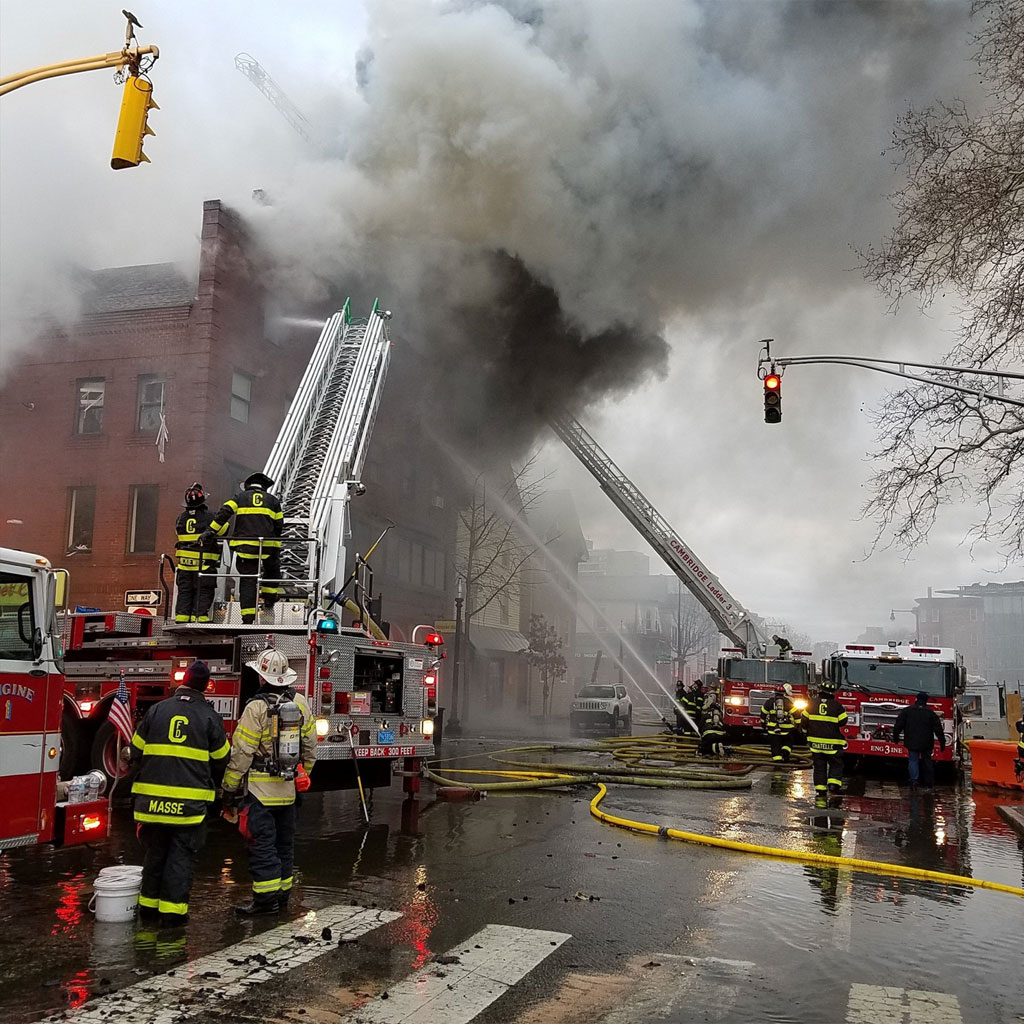 Praise for response to fire, care for victims, contrasting with lack displayed after flood

The fight against a four-alarm fire that struck two East Cambridge buildings early Monday was recounted at the night’s City Council meeting, followed by praise for the city’s response – not just in putting out the fire, but in caring for the 22 people displaced by it, whose immediate and long-term care were discussed extensively by officials.

It was a striking contrast with the public comment that had just ended, when victims of a Dec. 23 flood in West Cambridge affecting eight homes told councillors that not only had there been no official words of comfort or coordination of aid as the emergency unfolded, but that there had been none in the 22 days since. It was the second week they gave testimony.

David Hirsh, a Cambridge Health Alliance doctor whose home and cars were caught in floodwaters, spoke optimistically and in medical metaphors, saying that his home was “deeply injured” and that he was disappointed by the lack of response, but “the fracture I think we should try to prevent [is] the one between government and its people, and I’m absolutely confident we can do that.” 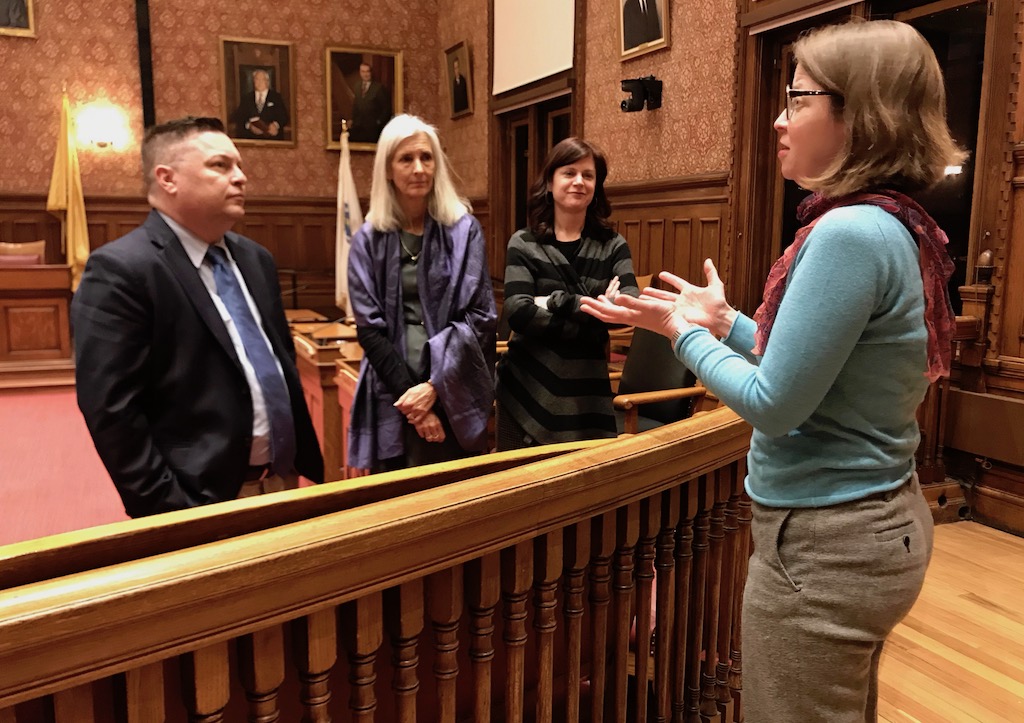 That confidence might have been shaken by hearing fire officials, the city manager and city councillors talk next about the response to Monday’s fire.

A cause for the blaze is yet not being revealed, Acting Fire Chief Gerard Mahoney told councillors, but it was known that a 911 call came in at 5:41 a.m. reporting a fire at 6 Hunting St., where firefighters arrived to find heavy smoke coming from the top floor. The fire “consumed pretty much all of 6 Hunting and extended into the building [next door] at 851 Cambridge St.,” Mahoney said. The three- and four-story buildings went up in 1900 and 1873 and had been reconstructed numerous times over the years, he said, making for “a lot of voids – fire gets into them, and [makes it] very difficult to find and attack the seat of the fire.”

Mahoney said the fire may have started in the basement of the Hunting Street building, which hosted the Sunset Cafe Portuguese restaurant at ground level.

As fire companies from Somerville, Belmont, Boston, Brookline, Watertown and Waltham arrived to help put out the fire over the next several hours, displaced residents gathered in the nearby Frisoli Youth Center. Staff from the City Manager’s Office, various city departments, Metro Housing Boston, the Cambridge Housing Authority and the American Red Cross spoke with them and the mayor, vice mayor and numerous city councillors and School Committee members visited the shelter to speak with them as well, city staff said. The victims were immediately handed $125 debit cards for expenses and $260 debit cards for hotel rooms, and “the Red Cross will stay with these people for 45 days and keep updating us” on housing, City Manager Louis A. DePasquale said.

There would be meetings every day this week and staff would stay in touch with the victims. “We will be there, we will help,” DePasquale said. “Hopefully we can provide housing for all.” 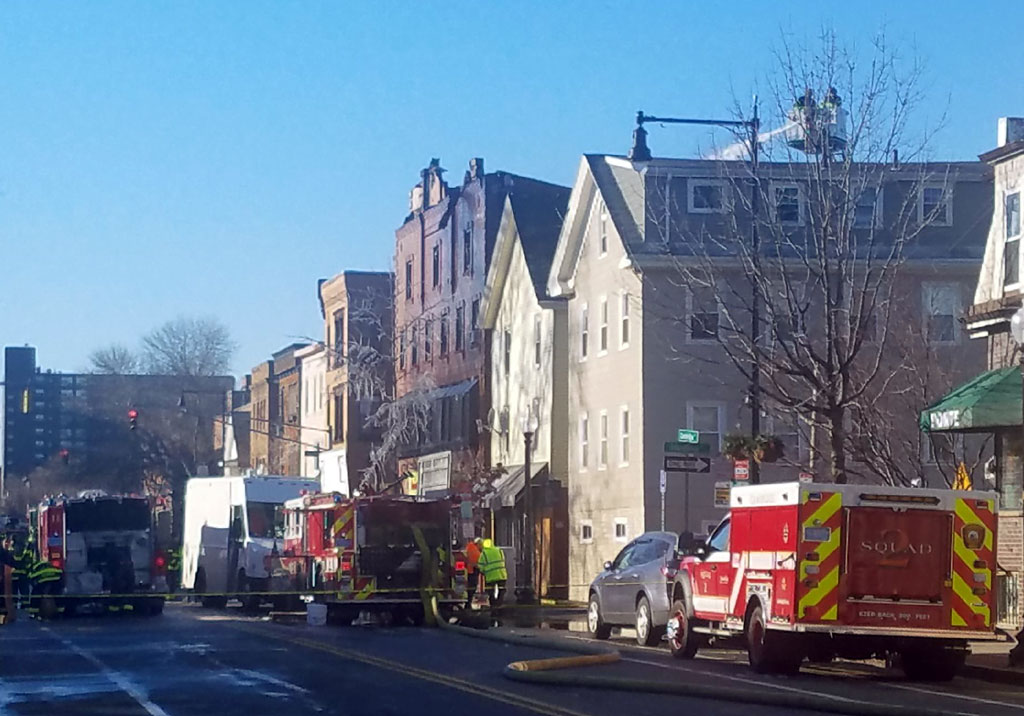 The Mayor’s Disaster Relief Fund was reactivated after taking in and handing out nearly $718,000 after the 10-alarm fire that struck East Cambridge in late 2016, which left as many as 167 people homeless, and a lesser amount later gathered for Puerto Rican hurricane relief. “We’ll be sending … checks as early as tomorrow morning totaling $11,400,” DePasquale said. The response to the Monday fire “was the city at its best.”

City councillors expressed appreciation, with Alanna Mallon saying that to “see the city come together this morning, it was like a well-oiled machine,” and she was proud to see city staff making victims “comfortable, welcome and [assured] that they were going to have their problems taken care of.” E. Denise Simmons agreed that “if you’re going to have to have a tragedy, have it in Cambridge,” and credited city leaders such as DePasquale for being on the scene, because it’s “important to see city leadership there … everything fell into place, it was like they dropped from the sky.”

No one, at the time, said anything about the sharp difference in treatment received by flood victims, some of whom had just spoken about how their lives continued to be affected by a disaster resulting from a municipal water main pipe described as being installed in 1867 and last upgraded in 1954. After firefighters capped a torrent of water strong enough to move cars and long enough that some homes drew water waist-deep or even nose-deep, the affected residents were left to fend for themselves; some are still in hotels, paid for by themselves.

As he left the meeting, DePasquale was asked by reporters about the difference in approach.

“We are trying to reach out, and I’m being told we have reached out” to some flood victims, DePasquale said, acknowledging “we need to talk about our communications.”

But Red Cross guidelines for floods may be different than for fires, he said, and “that’s something we don’t have answers on,” despite it being more than 20 days since the pipe burst.

Back inside the meeting, vice mayor Jan Devereux said she couldn’t help but notice the difference in responses – and the “expressions [on the faces] on some of the people” – and “the contrast, I’m afraid to say, is pretty stark.”

Here's @jandev raising the water/fire Two Cambridges issue at 8:40pm, after staff left. The council alleged to support her amendment to PO#1, but only as a standalone motion they wouldn't take up until 2 weeks from tonight. pic.twitter.com/Ayqc1VQeIu

Councillor Tim Toomey had an order on the night’s agenda asking if the city is monitoring its aging pipelines to prevent breaks – essentially the same order of his the council adopted unanimously Nov. 3, 2014, without response – and Devereux tried to amend it, adding an order for the city manager to review the response to flooding and see whether the Mayor’s Disaster Relief Fund could be used to help flood victims as well as fire victims. After uncertainty about whether the order should be retroactive to the Dec. 23 pipe burst and discomfort from Toomey that the amendment might risk the success of his own order, Devereux withdrew it and promised to reintroduce hers as a standalone.

Flood victims who lingered after public comment talked with some councillors, who conjectured that the timing of the disaster played a role in response – 4 a.m. Dec. 23, as the holidays neared and many city leaders were out of town – and apologized for their own absence. Whereas internal communications about the Monday fire were clear in painting it as a disaster, councillors got little sense of alarm from staff as the flooding spread. “It was two sentences,” Devereux said.

The flood victims who stayed were also philosophical about the difference in treatment, noting their own privilege with the mainly lower-income and more vulnerable victims of the fire.

“It’s not a competition. I feel for those people,” said Brattle Street Julia Holderness, talking with Devereux, Mallon and Mayor Marc McGovern after the meeting. “But what happened to us also matters. We would have been grateful for a more proactive response.”

She hoped the flood would be “a wake-up call for the city … Infrastructure is not sexy, but it is essential to the functioning of any city, and in a center of tech innovation like Cambridge, we should expect the basic infrastructure to work, and not cause residents actual harm.”

Hirsh noted that as crises go, fires move faster and have more ability to affect more people if attention isn’t paid. “They can’t miss it,” Hirsh said. With a flood, “it was missable and missed.”

The holiday-season timing helps explain how that happened, Hirsh said, and he was grateful that the city saw through the “very visible” fire to also “do a good job of seeing what’s invisible” in helping its victims who need the community’s help. After a conversation with McGovern, he also said officials were now paying attention. “They’re listening to us, and that feels great.”