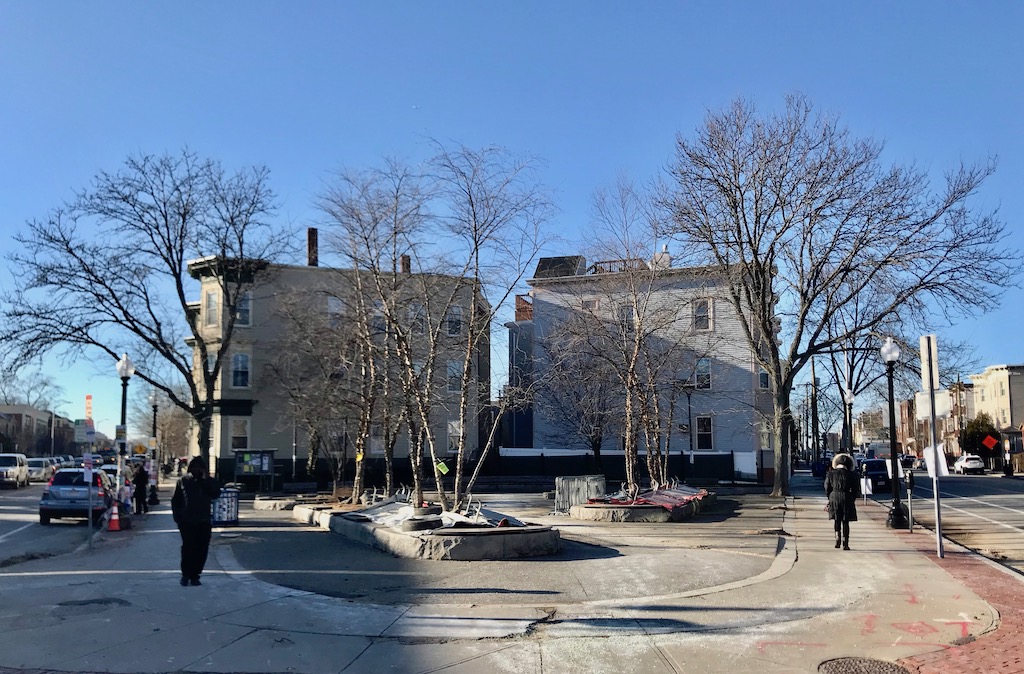 A citizen appeal over Vellucci Plaza construction and an Inman Square redesign comes before the Board of Zoning Appeal on Thursday, though work has begun. (Photo: Marc Levy)

Protected bike lanes head for a momentous vote, along with library ‘creativity zone’ for children

City Council, 5:30 p.m. Monday. The big news is a Cycling Safety Ordinance that requires permanent, protected bike lanes to be installed on roads being reconstructed as part of the city’s five-year Street and Sidewalk Reconstruction Plan. If passed, it would apparently make Cambridge the first U.S. city with such a law, adding heft to our largely undeserved reputation for innovation. (Additionally, the city manager is asking $300,000 to help expand the separated bike lanes network.) The council will also hear a request for $1.3 million to build a children’s “creativity zone” called The Hive at the Cambridge Main Library; focused on science, technology, engineering, arts and math, it’ll feature a makerspace, multimedia recording studios and a lab for virtual and augmented reality tools. Reports on airplane noise and micromobility platforms such as bikes and scooters are due, and councillors are upset about the lack of an elevator at the Central Square red line T stop (and that T stop in general) and asking that all Sullivan Chamber committee hearings be televised and archived online. Televised.

Alewife looks to get restaurant that can serve 725

License Commission, 3 p.m. Wednesday. A gigantic restaurant at this point identified only as UBC – 4,200 square feet, with occupancy of 225 inside and another 500 outside (though with seating for only 160 and 92, respectively) – seeks to serve food and drink at 35 CambridgePark Drive by the Alewife red line T stop from 6 a.m. all the way to 2 a.m.

Government Operations, Rules & Claims Committee, 4 p.m. Wednesday. This committee run by vice mayor Jan Devereux will look at how to implement early voting in city elections and discuss the possibility of lowering the voting age in city elections to 16 years old. Televised.

Cambridge Redevelopment Authority, 4:30 p.m. Wednesday. Various Kendall Square developments are on the agenda, as well as a motion to bring in Somerville’s Artisan’s Asylum as a consultant for the Foundry community building coming to East Cambridge. There will be an update on a $200,000 loan to the Margaret Fuller Neighborhood House and, after the public part of the meeting, a closed-door session about the possible purchase of at the “nonprofit row” building at 93-99 Bishop Allen Drive near Central Square. The first hour of the meeting is set aside for design review issues.

Human Services Commission, 5:30 to 7:30 p.m. Thursday. The commission plans a review of a report on “Addressing the Overdose Epidemic in Cambridge” and its recommendations by the City Manager’s Opioid Working Group, led by Claude Jacob, the city’s chief public health officer,  and Tali Schiller, a substance use prevention educator with Cambridge’s Public Health Department.

Board of Zoning Appeal, 7 to 11:30 p.m. Thursday to hear, among other items, a legal appeal about Vellucci Plaza and the redesign of Inman Square from residents who oppose the work, and a request for construction by the Harvard Divinity School after it made way by taking down a century-old red oak, calling it at “high risk” of failure based on reports by arborists for the city and hired by Harvard.