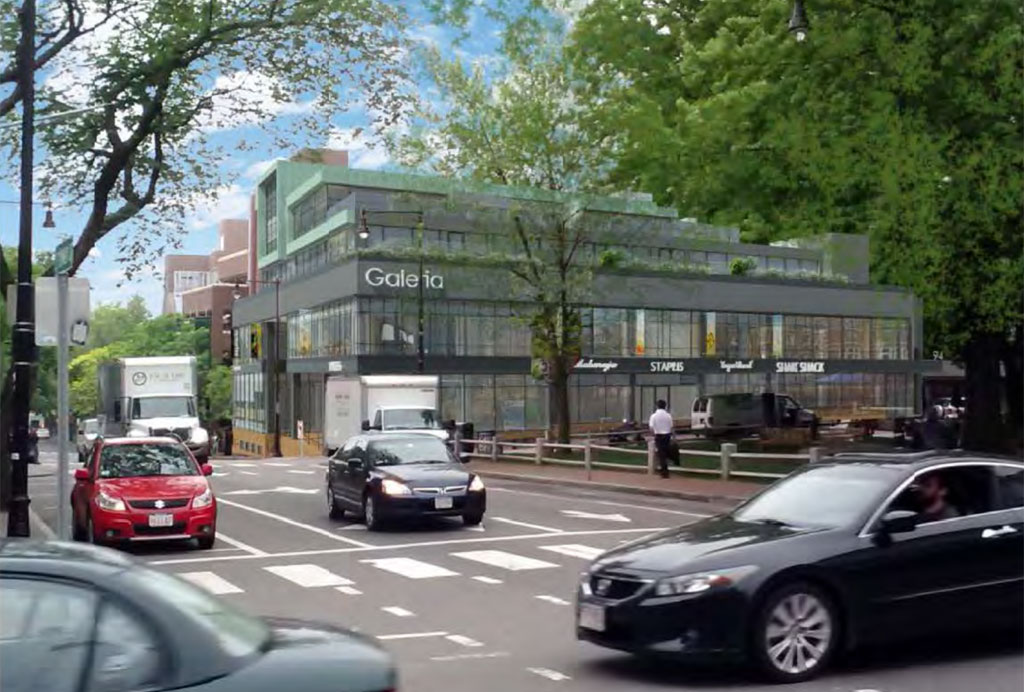 An expanded Crimson Galeria would step back from the Winthrop Square park in Harvard Square, developers say.

A Central Square Business Improvement District, $73.5 million around the city and voting rights

City Council, 5:30 p.m. Monday. The city manager is making the formal request for a nonprofit Central Square Business Improvement District, which will take fees from property owners within the district and use the estimated $1.2 million annually to revitalize, promote, maintain and program the area; and is responding to long-awaited and languishing orders about urban farming, lodging houses and an updated table of uses for property with a mea culpa that the Community Development Department’s work on zoning changes – and it’s a ton – lands on a single person, though two new zoning staff will help the department prioritize. A $678 million budget is being submitted for the next fiscal year, and there are requests for massive amounts of money (some $73.5 million) coming to the council, including $22 million in improvements at Fire Station Headquarters; $20.5 million for various water pollution abatement projects; $10 million for improvements at City Hall; $10 million to get design and reconstruction started at the Tobin School building; $4 million for street and sidewalk reconstruction; $4 million to redo Eliot Street as part of Harvard Square kiosk and plaza improvements; and $3 million for improvements at the Department of Public Works. Councillors, meanwhile, have voting-rights orders to talk about, including on extending municipal voting rights to noncitizens and people as young as 16, and supporting a state bill making it easier for people to vote absentee. And they’re expressing alarm about a proposed Eversource substation for Fulkerson Street in East Cambridge.

Getting to zero waste, including with less plasticware

Planning Board, 6:30 p.m. Tuesday. There will be an update on the apartments being built around St. James’s Episcopal Church in Porter Square, but the news is the return of a proposal to enlarge The Crimson Galeria at 57 JFK St., Harvard Square, home to Staples and restaurant such as BonChon, The Maharaja, Shake Shack, Tom’s Bao Bao and the announced Veggie Grill. The owners want to add a 9,295-square-foot third floor, a 8,090-square-foot fourth floor (most of it general office space, but with a 1,700-square-foot roof deck) and a 2,409-square-foot mezzanine to the existing 36,609 square feet – with exemption of some basement space and from parking and loading requirements as allowed by the City Council in 2016, after the board had approved Crimson Galeria expansion plans in 2015.

Chinese staple is gone, but lunch at Alden & Harlow?

License Commission, 3 p.m. Wednesday. Commissioners will consider a couple of disciplinary issues at Central Square establishments, note the closing of P.F. Chang’s at the Cambridgeside mall and hear a request from Alden & Harlow to open at 11 a.m. weekdays in Harvard Square, rather than at 4 p.m.

How students and parents feel about their IEP

Urban Forest Master Plan Task Force, 6 to 8 p.m. Thursday. A consultant team will present a cost-benefit analysis of its recommendations, provide information on their investigation into Cambridge’s canopy loss and present results of planting strategies on the urban heat island model.

Joint meeting of the Bicycle, Pedestrian, and Transit Advisory Committees, 6 to 8 p.m. Thursday. The committees meet to discuss the city’s Five Year Plan for Sidewalk & Street Reconstruction – now including requirements for bicycle infrastructure such as protected bike lanes.

The board meets in the fourth-floor conference room of the City Hall Annex, 344 Broadway, Mid-Cambridge.

Cambridge Digs Deep, noon to 2 p.m. Saturday. The fifth and final in a series on race, equity and inclusion reviews and responds to themes that have emerged throughout the series, reflecting on what personal actions can be taken and hearing from city officials about potential next steps.

The session will be held in the main cafeteria of Cambridge Rindge and Latin School, 459 Broadway, Mid-Cambridge.