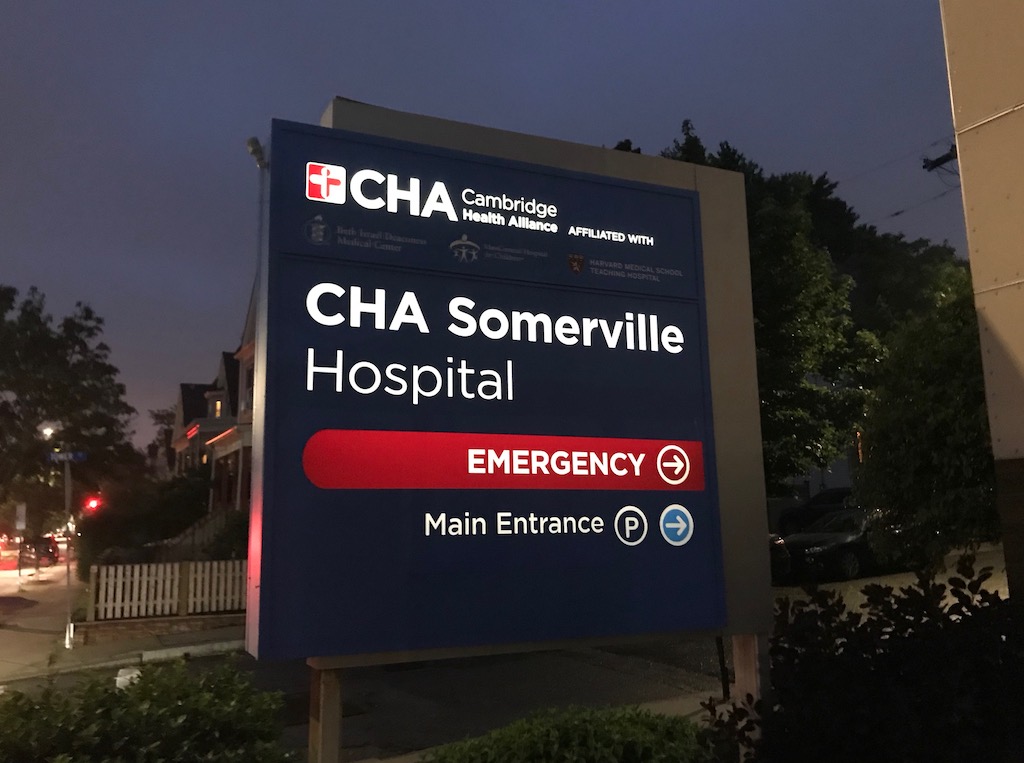 The CHA Somerville Hospital emergency room could close next year and replaced by an urgent care clinic. (Photo: Marc Levy)

Cambridge Health Alliance trustees will vote July 16 on a proposal to close the emergency room at Somerville Hospital and replace it with an urgent care center open 12 hours a day. The speed of the decision, coming two weeks after the last of three community meetings on the plan, dismayed union members and residents when they learned the date at the final community session. Four state legislators who represent Somerville had asked hospital officials to delay a decision until the Alliance chooses a new chief executive to replace the departing Patrick Wardell, state Sen. Patricia Jehlen said.

In addition, “we thought there are unanswered questions” about the proposed change, said Jehlen, who was at the July 2 community meeting.

Before disclosing the date of the trustees’ vote, Alliance officials had said a decision would come “this summer,” and as recently as Sunday the Alliance website said the same thing – giving no specific date. If approved, the emergency room will close in the spring of 2020, officials said.

Visits to the Somerville Hospital emergency room have fallen sharply since 2008, and about 61 percent of patients don’t need advanced-level emergency treatment, according to statistics presented by the Alliance at the community meeting. Officials said some patients, particularly immigrants, told doctors they feared going to the emergency room and wanted the option of urgent care because they faced high copays from insurance companies if they sought emergency treatment.

Union members, who have collected 2,000 signatures opposing the move, said patients will suffer, waiting longer for treatment if they go to CHA Cambridge Hospital’s emergency room. The extra time it will take to get to Cambridge, particularly with traffic congestion, will endanger some patients, they said. “The population [of Somerville] has grown,” one union worker said. “Taking this out of the community is terrible.”

One resident said she was shocked to learn about the plan only recently; several said they were worried about what will happen to people who show up in the middle of the night after the emergency room is no longer operating and the urgent care clinic is closed. Alliance officials promised extensive public education and said they may install a telephone or similar equipment outside the entrance.

“If people in my family are seriously ill they are going to Cambridge [Hospital],” said Mary Cassesso, chief community officer and president of the CHA Foundation.

The urgent care clinic that the Alliance wants to open will have more services than most freestanding for-profit urgent care centers, including the ability to give patients intravenous medicine. but the list of services does not include psychiatric treatment. An Alliance spokesman couldn’t immediately say what percentage of Somerville emergency room patients were seeking help for a mental health problem.

When Laura Levis, the Somerville woman who died in 2016 after she couldn’t find the entrance to the Somerville Hospital emergency room, was looking desperately for a way in, two security guards inside had been assigned to watch a behavioral health patient. That was one reason given for the fact that no guards were monitoring surveillance video.

The proposed urgent care center will also accept uninsured patients and those in government programs that help low-income families and individuals, as well as people with commercial insurance plans, say officials and Alliance literature. Unlike commercial urgent care clinics, it won’t require patients to submit a credit card before they are seen, Alliance officials said at community meetings.

While the Alliance has emphasized this aspect of the proposal, it has also partnered with Carewell Urgent Care, a chain of urgent care centers that operates in 17 communities including Somerville and Cambridge. Carewell accepts Medicare and some MassHealth plans, but not the one serving undocumented immigrants. The Alliance website has advised patients to go to Carewell if they need to be seen when their health center is closed.

Alliance officials said the approximately 20 Somerville Hospital emergency room employees will be offered a “comparable job” if the emergency room closes, but it may be in a different location. About one-third of workers in the emergency department are “contract workers” not on staff, officials said. The Alliance isn’t proposing the closing for financial reasons, it said.

Under state law, a hospital that wants to end a service the state Department of Public Health deems “essential” must hold a public hearing and present a plan for replacing it – though the health department can’t stop the closing. The Alliance has contended that it doesn’t need to go through those procedures because a provision of the law exempts proposed closings if there is a similar service with adequate capacity within five miles; the Cambridge Hospital emergency room is about two miles from Somerville Hospital.

The exemption doesn’t apply to all provisions of the law, including one that allows the state agency to override it; another section that is not subject to the exemption requires hospitals to formally notify the state, employees and other parties of their plans.

“DPH has still not received any formal notice from Cambridge Health Alliance about their intent to close the [Somerville Hospital] emergency facility,” department spokeswoman Marybeth McCabe said in an email. “If and when they decide to move forward with a plan … they will need to formally notify us of the planned changes.”

CHA spokesman David Cecere said Sunday the Alliance will comply with the notification requirements if trustees decide to close the emergency room.

In 2013 the state ruled that an Alliance plan to close 11 psychiatric beds for children from 3 to 7 and consolidate the remaining 16 beds for patients from 8 to 18 would eliminate an essential service. The Alliance withdrew the proposal after state legislators increased the health care system’s appropriation.